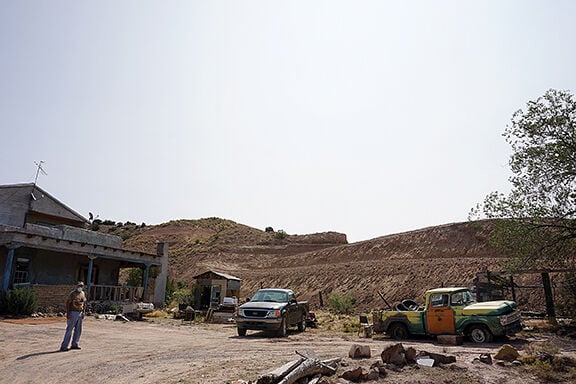 The property of Abran Bustos has been in his family for generations. Residents of El Llano are concerned that the wall of dirt now behind it could pose a threat not only to his property but also to the Acequia del Llano. 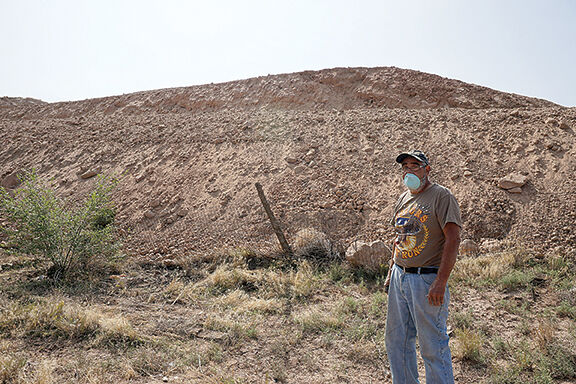 Abran Bustos stands beside the wall of dirt that is now adjacent to his property. That wall was a foothill before the El Llano development company razed it.

The property of Abran Bustos has been in his family for generations. Residents of El Llano are concerned that the wall of dirt now behind it could pose a threat not only to his property but also to the Acequia del Llano.

Abran Bustos stands beside the wall of dirt that is now adjacent to his property. That wall was a foothill before the El Llano development company razed it.

The foothill that once stood adjacent to the southern end of Abran Bustos’ El Llano property has become a wall of dirt.

Boulders and rocks tumble down, pushing over the metal wiring of his fence. Worried that the dirt will overtake his land, Bustos is having trouble sleeping at night.

“Even if I take my fence out of there, it’s just going to keep coming down into my property,” he said. “All that stuff’s still coming in.”

In early September Bustos and his wife Marilyn watched bulldozers raze the hill.

“This was such a beautiful mountain hill,” Marilyn Bustos said. “They really tore it up.”

The El Llano Development Company, whose registered agent is Katharine Cook Fishman, owns the property and is sculpting the area for lots, Española Planning and Zoning Director Richard Hubler said.

But there is little transparency around the company’s work.

When asked what the companies are working on at the site, Juarez replied, “We’re just leveling some ground.”

When asked what the goal of leveling the ground is, he replied, “The goal is to level the ground.”

Bustos has little recourse to protest the development. Hubler said developers do not require permits to move dirt, and there are no official City processes behind the work for Bustos to appeal.

Through the Española Mercantile Company, Cook Fishman and her late father Richard Cook have a long history of developing land without their neighbors’ blessings.

In the early 2000s, for instance, hundreds of residents of Velarde stood against the operations of Richard Cook’s sand and gravel mine in the area, concerned about dust, traffic, diesel and fumes.

Their petition, signed by more than 400 people, did not halt Cook’s efforts.

Residents of El Llano, like residents of Velarde, have been left with environmental concerns over the Cooks’ latest project.

The Acequia del Llano could be threatened when rains hit the slope––the water could wash loosened dirt into an arroyo that cuts west across Bustos’ property toward the acequia, possibly clogging the ditch or sending silt into people’s fields.

Don Bustos, Abran Bustos’ brother and a commissioner of the acequia, is worried too that if the lots are developed into homes, runoff from the driveways, uncontained by proper drainage infrastructure, could run into the acequia.

Frieda Gonzales, chair of the acequia commission, said the developers have not offered to sit down with acequia leadership to discuss potential effects of the work.

“We do want to be abreast of any type of development that is going on, so that we can have a voice at that table to advocate on behalf of the acequia to keep it healthy,” she said.

Abran Bustos fears that the leveling of the hill has destroyed animals’ habitats. He said he has noticed more rabbits and coyotes in his yard since the work began.

When their son was a child, he called the hill Pride Mountain and would race down it, tucking his head in as he picked up speed.