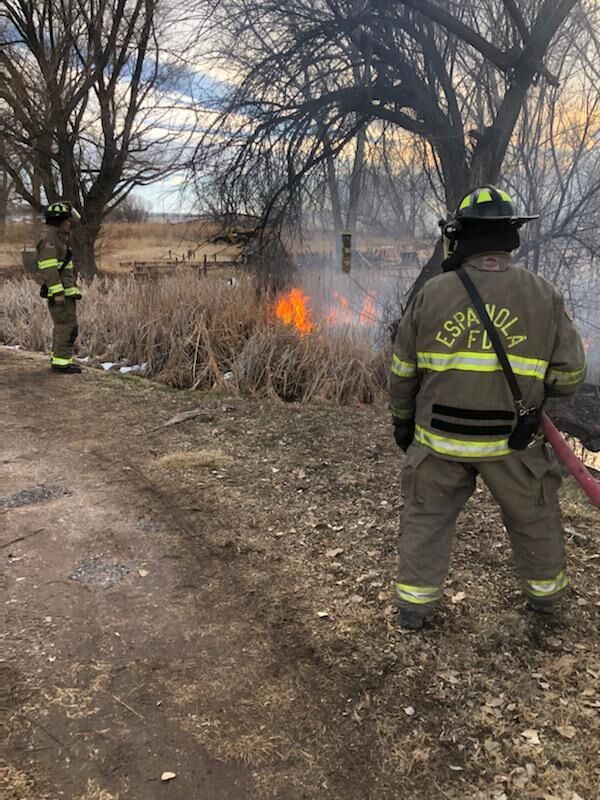 A 10-acre brush fire Feb. 21 in the bosque north of Santa Claran Casino brought 15 firefighters to the scene with about a half dozen brush trucks and tender units (tankers).

Española Fire Department Lt. Theresa Martinez was scene commander for the fire. She said her Department set up a command post in the north parking lot of the Casino about 2:30 p.m. and immediately established it was more than the one department could handle.

“We paged for more manpower and tenders,” she said Monday in a telephone interview. “And we contacted Santa Clara forestry and BIA because it’s reservation property.”

“At one point the fire got within about 150 feet of structures on West Pueblo,” Martinez said. “We sent a brush truck and manpower and they got it handled. Residents at the end of West Pueblo were prepared to evacuate and move vehicles.”

“But with the cattails and winds blowing 10 to 15 miles per hour, it could have been disastrous,” she said.

“They went in and did mop up (ensuring everything was extinguished),” she said.

“Santa Clara forestry showed up and we turned the scene over to them and Black Canyon (of Santa Fe),” she said.

She said Española and volunteer crews left the area about 6:15 p.m.

It has not been established what caused the blaze. Santa Clara forestry has been doing prescribed burns in the bosque, but had not burned in that area for two days.

“Initially they said they burned Thursday and went out Friday to evaluate the situation and didn’t see anything, but maybe Saturday with the wind picking up it caught an ember out there,” she said.