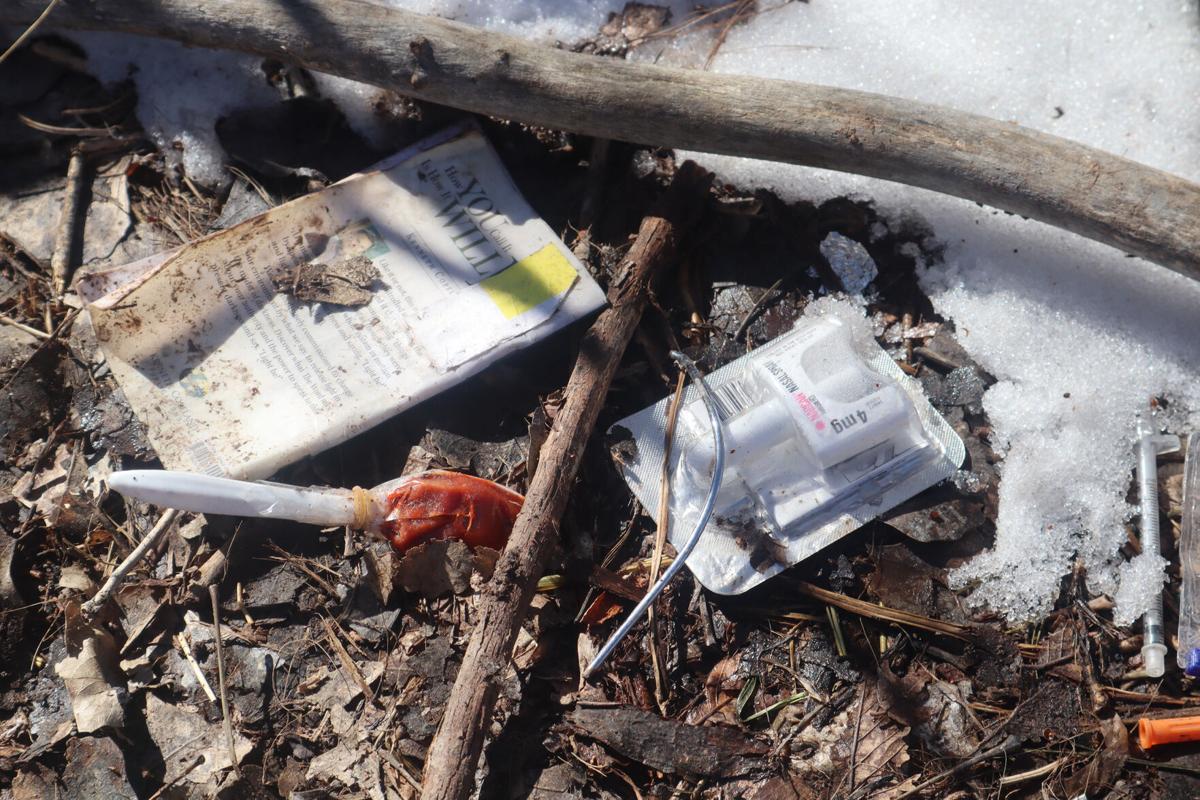 A package of Narcan lies amid the trash, needles and waste at the Ranchitos park homeless encampment. 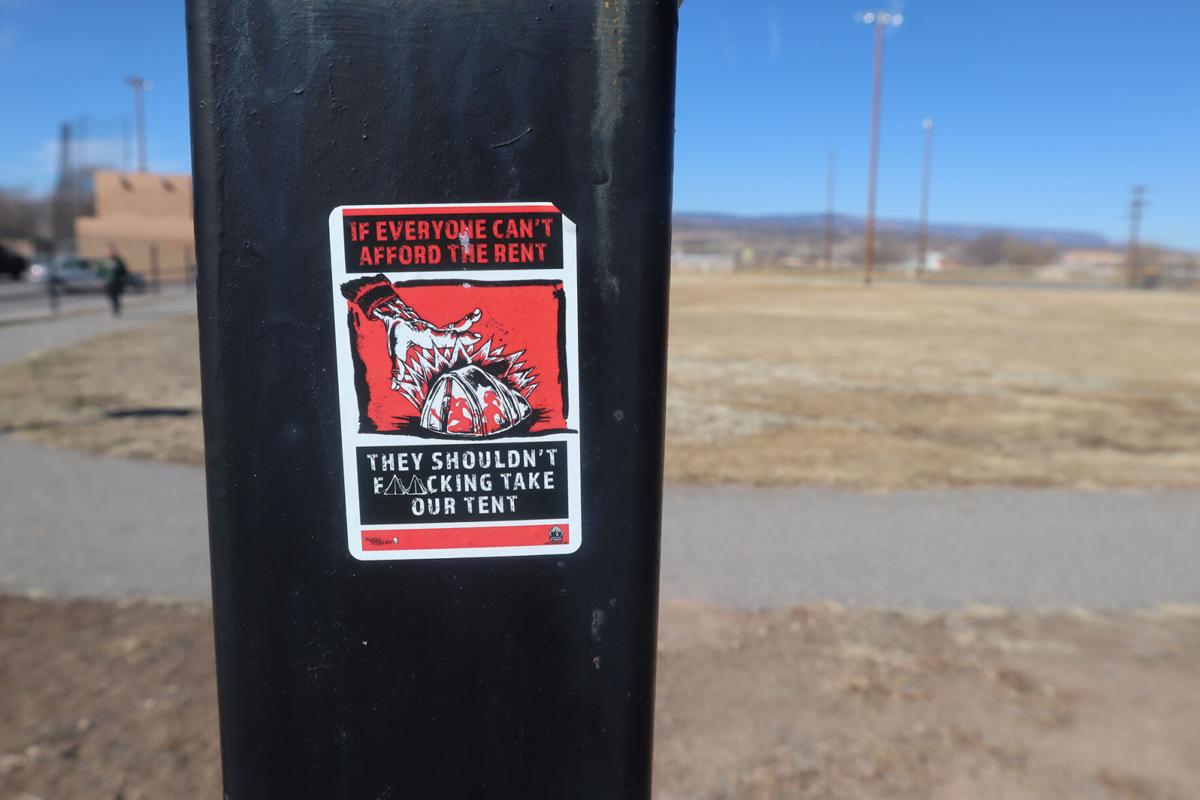 A poster advocates for allowing continued camping in Ranchitos Park in Española. The campsite behind the park was cleared by city employees Tuesday. 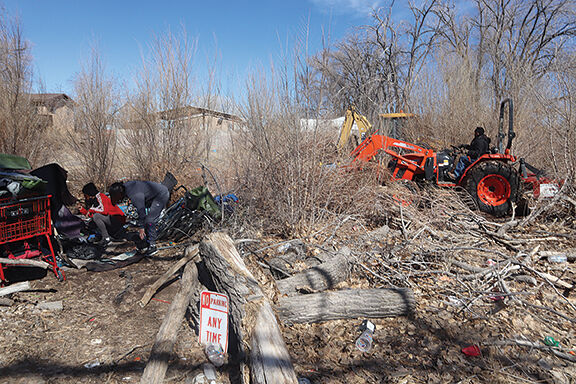 April Martinez (red) and Jerrica Salazar (gray) talk Tuesday with a man living in a tent while city employees clear out the empty lot with heavy machinery. The campsite behind Ranchitos Park was scheduled for removal last week, but was delayed, due to the cold weather.

A package of Narcan lies amid the trash, needles and waste at the Ranchitos park homeless encampment.

A poster advocates for allowing continued camping in Ranchitos Park in Española. The campsite behind the park was cleared by city employees Tuesday.

April Martinez (red) and Jerrica Salazar (gray) talk Tuesday with a man living in a tent while city employees clear out the empty lot with heavy machinery. The campsite behind Ranchitos Park was scheduled for removal last week, but was delayed, due to the cold weather.

The City of Española’s Departments of Community Services and Planning and Land Use on Tuesday demolished an encampment of homeless people behind Ranchitos Park.

The clean-up was originally scheduled for Feb. 19 but was postponed due to weather. In a Monday interview, Community Services Director Scott Frost said the demolition would take place Wednesday, but it was suddenly re-scheduled to the day prior.

The city has been planning the demolition of the camp, which hosted about two dozen people, for several months after nearby homeowners reported incidents of indecent exposure to children and public drug use by the people staying at the site. The city needed to get permission from Okhay Owingeh, which owns the land.

Prior to employees from the city cleaning the campsite Frost and officers from the Española and Ohkay Owingeh police departments checked for anyone in the tents.

“I’ve been afraid all winter long I’ll come out here and find a dead person,” Frost said. “As distasteful as it is, it’s on.”

The people camping in the area were notified Feb. 5 of the city’s plans, according to Christopher Trujillo, who was staying in the area. City Manager Xavier Martinez told the city council at a Feb. 9 meeting that the demolition would be going forward.

“Mr. Frost and other staff went out there and posted signs with some care bags with a toothbrush and some toiletries of that sort,” Martinez said. “And also with a sign to let them know that the city will be proceeding to clean that piece of property on Feb. 19, to give these individuals time to move from there and move their valuable belongings from there before we proceed with that process.”

Other people staying at the encampment confirmed that Frost and Director of Planning and Land Use Richard Hubler visited to deliver the notices and hygiene supplies.

“I was sitting in my tent that day they came, my door open,” said Joseph Glock, who was one of the few people left in the area on Friday, the day originally scheduled for the demolition. “They just put these notices and left, they didn’t stop to say anything to me. All I heard them saying is that they’re supposed to be bringing a bulldozer today.”

Glock, who described himself as from San Juan, said the vast majority of the people who stayed at the camp were from the Valley.

He said injuries he suffered from being hit by a car caused him to lose his income, which led to his eviction from his house. He’d been staying at Ranchitos Park for about four months with two tents: one that he slept in, and one that held the majority of his clothes and belongings from his house.

In the days since the city served the campers an eviction notice, most people staying there have moved on.

“At least half of the dwellings that were there are abandoned, they’ve left shopping carts full of trash and all their stuff behind,” Frost said. “When I went out earlier I saw maybe half a dozen active camps, whereas two weeks ago, there was 25 or 30. So obviously a lot of them have moved on.”

Frost said he and other staff from the Parks Department have also recovered hundreds of used needles from the area, which is just steps away from a busy playground. The biohazardous litter and the number of recent complaints from homeowners in the area have pushed the city to take action.

Glock said things were mostly peaceful but there were a few loud arguments that alarmed the neighbors.

“There was several couples here that were arguing and it got the cops called,” he said.  “That’s one of the reasons why we got kicked out of here, and because everybody was leaving the trash.

“I guess somebody, one of their daughters, one of the little kids out here found a needle in the backyard and then they saw people shooting up back here. So they called the cops and when the cops came, they saw all kinds of people here doing stuff. So that’s when all of this started.”

Christopher Trujillo, who was displaced, was planning to go to the recently opened Pathways Shelter to find a bed for the night. He had previously been staying in temporary housing at the Eagle Village Motel, which is managed by the shelter, but was evicted after a dispute with the shelter.

“When you call these numbers (on the eviction notices), you know what they said? ‘We don’t know what to tell you, you’ll have to get your stuff out by yourself,” Trujillo said.

Glock was unable to call the assistance lines due to not having immediate access to a phone. He’s not sure if Pathways is a good fit for him, either.

“Before all of this, they’re saying they’re supposed to have 10 beds for the men and 10 beds for the women,” Glock said. “But now I’m hearing there’s only five and five. So there’s not even enough room for everybody that’s out here. And one of my friends that is staying there, he’s breaking off cheeva, off heroin, and he’s on subs (Suboxone) and when he went in there, they took his subs from him. So knowing he’s trying to break, why are you gonna take that from him when it’s prescribed to him? It makes no sense.”

According to Pathways Shelter Director Dena Moscola, the shelter does allow people to bring in their recovery assistance medication.

"If we didn't, they'd be on the streets, which would greatly jeopardize their recovery," she said.

Shelter staff keep the medication in a locked location and monitor intake.

Frost acknowledges that Pathways Shelter has a limited number of beds and simply doesn’t have the capacity for 25-30 displaced people at one time. He’s currently looking into organizing a public campsite in a non-residential area to prevent people from being dispersed across the city, while maintaining sanitation and accessibility for police and first responders.

“Here’s my wish list, here’s what I would like to see us do: I would like to see the city provide sanitation and access to healthcare and a safe environment for these individuals,” Frost said. “Without infringing upon the rights or taking away services from the law-abiding, taxpaying citizen. Could it be that we can identify a place where they can camp for free, where there’s a RTD bus stop, where it’s near health care? I think I have some areas in mind.”

For the time being, however, Glock has no real prospects for places to go.

“You can see I keep trying to keep mine clean, all that shopping cart is trash I’ve picked up,” he said. “See, I don’t leave it. I don’t just throw my trash like everybody else. I even went through and picked up everybody’s (expletive) needles that they left. So that’s why I wanted to try and talk to him (Scott Frost) to see if I could at least try and see if they’ll let me stay.”

April Martinez, the mother of one of the people staying at the campground said her son had been staying there for months.

“This just isn’t cool,” April Martinez said. “Why are they doing this to these people? They should have a place for them, they should not be doing this to people who don’t have nothing.”

April Martinez’s son did not wish to be named. He said the last time anyone had notified people staying at the camp was months ago. Another camper said they thought they had until Friday to relocate.

Jerrica Salazar, an Española based caseworker, working with the Mountain Center said she had been as surprised as anyone else that the removal was happening today.

“I’m upset, they have nowhere to go,” Salazar said. “Our community needs to realize this, people aren’t going to go anywhere unless we fix it.”

Salazar was only able to get workers from The Mountain Center because she was given a heads up from Frost and was working with him to establish a more permanent campsite with proper sanitation and water in Española.

“I’m grateful for Scott letting me know what they were doing,” Salazar said. “I know this is not ideal.”

It just breaks my heart to see and read this. Its even going to get worse with all the new people coming in to town. You can't blame folks for not wanting these camps set up near their homes. The drugs, the scuffles etc but where can they go. Someone told me "they just need to get a job" easier said than done. How do they get cleaned up to go to work, or even apply if they are still using. Wish there was an answer but I do not see any real possibilities at the present time. Maybe instead of sending money all over the world we should clean up our own backyard first.

That spoon is a mexican candy. Not a spoon with heroin. How could someone make a mistake like that?