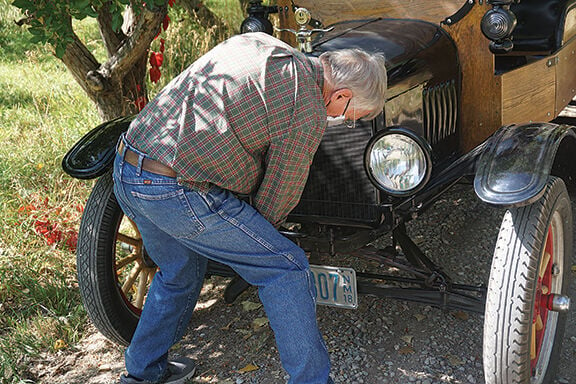 Dave Ferro's 1918 Model T depot hack does not have an electric start. He must crank start it every time. Andy Andrews explained the spark advance must be in a certain position and the fuel handle turned down when crank-starting or it will take your thumb off. Probably a lesson learned after the first mistake 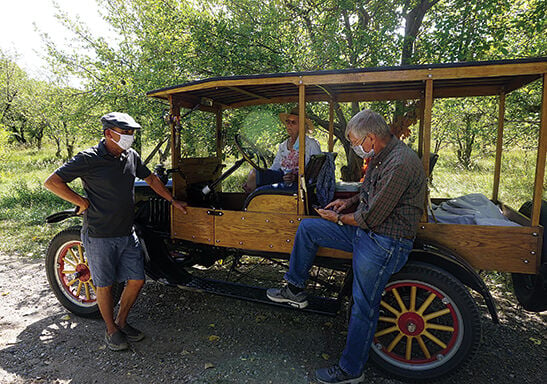 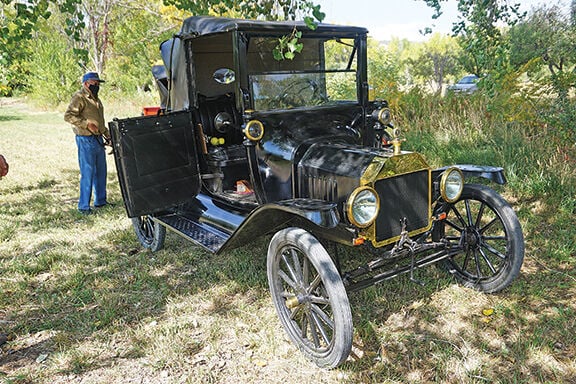 Dave Ferro's 1918 Model T depot hack does not have an electric start. He must crank start it every time. Andy Andrews explained the spark advance must be in a certain position and the fuel handle turned down when crank-starting or it will take your thumb off. Probably a lesson learned after the first mistake

A little less than 100 years ago, Henry Ford’s first Model T pick-up truck was fresh off the line. Mary Wheelwright was the owner of the hacienda at Los Luceros, built on the site of the ancient Tewa pueblo Phioge, and the 1,000 apple trees on the property were producing bumper crops. The new automobile technology enabled her to ship produce more quickly to Santa Fe, Albuquerque and beyond, helping establish New Mexico’s reputation for producing delicious heirloom apples in the early 20th century.

Seven antique Model Ts and a Model A on Sept. 26 once again visited Los Luceros, courtesy of the Tin Lizzies of Albuquerque, a club for Ford Model T enthusiasts.

“Every fall, we do a three to four day tour,” said Marilyn Duncan, who helped organize the tour and is the wife of Tin Lizzies president Paul Duncan. The tour size this year is much smaller, but the club boasts 150 members with 80 operational Model Ts among them.

The Tin Lizzies came into Española the morning of Sept. 24 and checked into the Inn of the Delta. That afternoon, they toured to Chimayó and Santa Cruz Lake. The next day, they went to Abiquiú and El Rito, crossed the hills to Ojo Caliente and returned to Española. Most of their day Saturday was spent at Los Luceros.

Usually, the Tin Lizzies put on a car show wherever they tour, and invite the community to come check out the cars. This year, however, things have been more informal. The cars were parked in front of the Inn of the Delta when not being driven around, and some people stopped by to check them out.

“So many people have been seeing the cars on social media and posting, so we’ve gotten a good reception there,” said Paul Duncan.

He’s been a club member for 10 years and was elected president in 2019.

The club’s main garage is in Corrales and owned by Larry Azevedo, but club members come from around the state—and beyond.

“Larry is really helpful with people fixing up their cars,” Andrews said. “There were 15 million Ts made, so it’s pretty easy to find parts.”

Surprisingly for a group of car enthusiasts, they have no desire to get anywhere fast—at least by our modern standards.

“I like to see things at a nice, slow pace,” said club member Kirk Peterson, who came to the tour with his wife Susan and owns a 1927 touring Model T. He’s been a club member for 17 years.

“When you’re cruising in a Model T, you see things you won’t see,” he said. ”Going slow, you’re not distracted.”

“There’s not even a radio in the thing,” Susan added.

The oldest car in the tour was from 1915, with the newest being a 1931 Model A, the cars manufactured by Ford immediately after the T.

Marilyn Duncan explains some of the difficulties they encounter on their tours. Radiators are always leaking, and cars can overheat when summiting hills. But a modern car with a trailer is usually following behind to tow anyone out of trouble.

“Our biggest problem is modern cars on the highway,” Duncan said.

“People can get impatient,” she said.

The timing of the tour coincided with Los Luceros’ first open weekend after being closed due to the pandemic. The historic site was established in 2019 and is New Mexico’s newest.

“We’re here to provide a safe, outdoor space to experience New Mexico culture,” said Ethan Ortega, site manager and archaeologist at Los Luceros. “The maximum capacity for the property is set to 120, so with 150 acres here there’s plenty of room for people to spread out,” he said.

After cruising around the historic hacienda, club members sprawled out under 250-year-old cottonwoods to enjoy lunch and fresh-picked apples from the adjacent orchards. Only a handful of other visitors were seen taking advantage of the beautiful autumn day to explore the site.

Ortega explained that Mary Wheelwright was one of the only people in the area who owned a car early on, so Los Luceros acted as a sort of transportation hub. “People would hear that Mary was going into Santa Fe, and they’d come down to hitch a ride,” he said. Car parts scattered around Los Luceros form an important part of the archaeological record that Ortega is tasked with uncovering and interpreting.

The re-opening of the site also coincides with the height of the apple season. Trees are full of apples, but the pandemic makes organizing a harvest difficult. The small staff at Los Luceros is doing their best to collect and utilize the crop.

This year, visitors to the site are welcome to wander the orchards and pick as many apples as they’d like, he said.