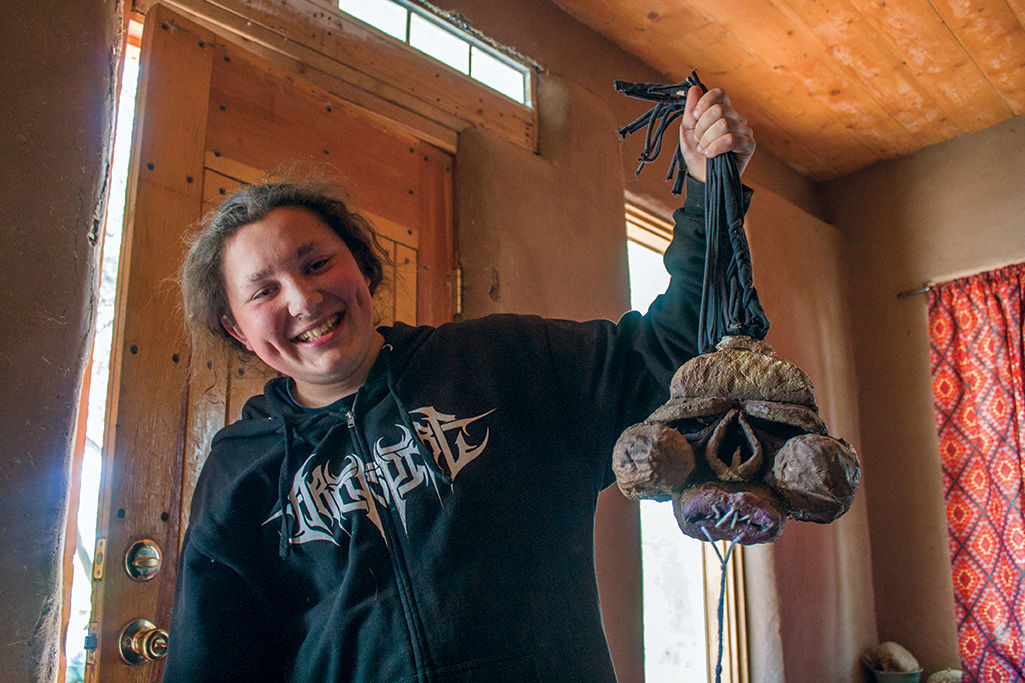 Lloyd Skanahwati Gray smiles next to a prop shrunken head he created for his and his brothers’ band, Snot Goblin, Sunday, in their home in Santa Cruz. The masks, worn by their youngest brother Mitchell Gray, are inspired by the metal band Gwar. 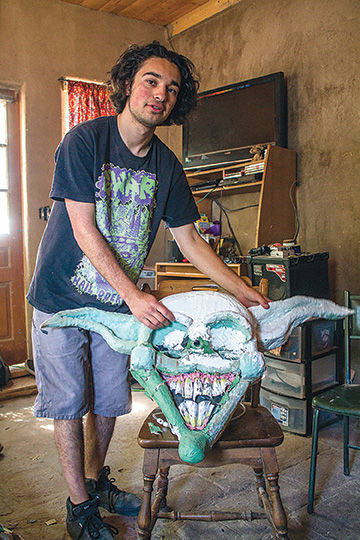 Thomas Kanewakeron Gray shows off a goblin mask he created for his and his brothers’ band, Snot Goblin, Sunday, in their home in Santa Cruz. The masks, worn by their youngest brother Mitchell Gray, are inspired by the metal band Gwar. 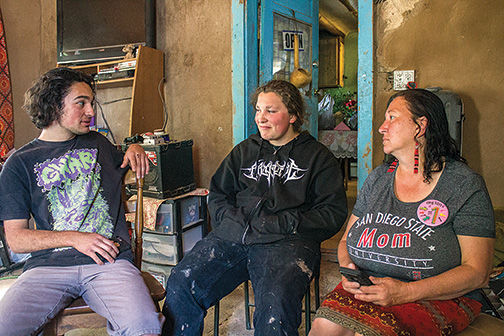 Thomas Kanewakeron Gray, Lloyd Skanahwati Gray and Lorraine Kahnertokwas Gray sit, Sunday, in their home in Santa Cruz. The family hopes to use their situation as an example to prevent future racial profiling of other indigenous people.

Lloyd Skanahwati Gray smiles next to a prop shrunken head he created for his and his brothers’ band, Snot Goblin, Sunday, in their home in Santa Cruz. The masks, worn by their youngest brother Mitchell Gray, are inspired by the metal band Gwar.

Thomas Kanewakeron Gray shows off a goblin mask he created for his and his brothers’ band, Snot Goblin, Sunday, in their home in Santa Cruz. The masks, worn by their youngest brother Mitchell Gray, are inspired by the metal band Gwar.

Thomas Kanewakeron Gray, Lloyd Skanahwati Gray and Lorraine Kahnertokwas Gray sit, Sunday, in their home in Santa Cruz. The family hopes to use their situation as an example to prevent future racial profiling of other indigenous people.

When Thomas Kanewakeron Gray, 19, and his brother, Lloyd Skanahwati Gray, 17, walked down a flight of stairs at the Student Recreation Center during a tour of the Colorado State University campus on May 1, they did not know why two armed police officers were waiting at the bottom of the steps.

At first, Thomas jokingly asked Lloyd what he did wrong, but the Mohawk brothers’ demeanor changed when the police asked them to step away from the tour group and briefly detained them.

“I remember getting kind of scared, because I saw them walking toward me, but I knew I didn’t do anything wrong,” Lloyd Gray said in a Sunday interview .

The police were responding to a 911 call by a white woman from Colorado who reported two people who looked like “they don’t belong.”

Now, the American Civil Liberties Union has agreed to represent the family. The teens’ mother, Lorraine Kahnertokwas Gray, said Tuesday that the ACLU has worked on a plan with the family that they are taking to the University.

The exact contours of the family’s legal action are unclear, however, Lorraine Gray previously wrote in a Facebook post that she is trying to follow the example of two black men who settled for $1 each and a promise by the city of Philadelphia to fund a pilot program for high school students aspiring to become entrepreneurs, after they were arrested in a Starbucks in Philadelphia.

The CSU incident sparked media attention worldwide as one of a string of incidents of racial profiling in the United States, some of which have led to police killing unarmed people of color.

They wanted to go to Colorado State University because of its proximity to the metal (music) scene in Denver, where they could pursue their musical careers while studying.

Lorraine Gray said the brothers saved enough money to drive the family van, their only vehicle, about seven hours from their home in Santa Cruz to the campus in Fort Collins.

The brothers arrived on the tour about 45 minutes late, and roughly 20 minutes into it, police arrived.

Body camera video shows police asking the brothers to empty their pockets and to explain whether they were part of the tour. One officer orders the teens to keep their “hands out.”

In the video, Thomas Gray explains to the police that Lloyd Gray did not answer questions by members of the group because he is shy.

“People were just worried because you guys were real quiet and they didn’t know who you were because you guys didn’t show up with parents or any of that stuff,” one officer says in the video.

The police let them go when Lloyd Gray showed them an email on his phone, proving that they were registered for the tour. The officers allowed them to rejoin the tour, but by then, the tour guide had moved on, apparently unaware that the police had responded, the school said in a statement.

“I think it’s pretty discriminatory,” Thomas Gray told the Associated Press on May 3. “Me and my brother just stayed to ourselves the whole time. I guess that was scaring people; that we were just quiet.”

In a May 1 recording to a police dispatcher, a 45-year-old white woman from Colorado who was on the tour said the brothers would not answer questions about their names or what they want to study at the school. She described them as “creepy.”

“[They] won’t give their names, and when I asked them what they wanted to study, everything they’re saying isn’t, they were lying the whole time,” she said in the call. “They just really stand out ... They’re just creepy kids ... It actually made me feel sick.”

Thomas Gray said in a Sunday interview he and his brother spoke to the tour guide when they arrived.

“My immediate thought was they’re being profiled because they’re different,” Lorraine Gray said on “Native America Calling,” a live call-in show. “They’re not safe there.”

Police redacted the caller’s name from a report about the incident, and Lloyd Gray wants to know her name, and talk to her.

“I want to meet her, I just want to know who it is, because, it’s like we’ve been put on blast pretty much, and we didn’t do anything wrong,” he said. “But she profiled us, and she gets to just chill, not really have any repercussions.”

When the dispatcher asked the woman to describe the brothers, she said she believed they were Hispanic.

“One of them for sure, he said he’s from Mexico,” the caller said. “They’re clothing has dark stuff on it. Just kind of weird symbolism or wording on it.”

Thomas Gray was wearing a shirt by the band Cattle Decapitation. When the band heard about the incident, they offered them both “free guest list spots to our shows for life.”

Lloyd Gray said it felt good to know that the band is looking out for them, and respects them.

Since the incident, Colorado State University officials have apologized to the family and promised changes in tour policies.

In an email to students, Colorado State University officials wrote that they are reviewing the incident to make sure it doesn’t happen again, or if it does, to handle it differently.

“The incident is sad and frustrating from nearly every angle, particularly the experience of two students who were here to see if this was a good fit for them as an institution,” the email said. “As a university community, we deeply regret the experience of these students while they were guests on our campus.”

School officials said it would refund the money the teens spent on travel. University President Tony Frank wrote in a message to all students and staffers that the school is considering giving all guests a badge or lanyard, and a new campus police protocol to tell tour guides if officers need to remove anyone from a tour group.

Lorraine Gray said in a Sunday interview when she heard about the proposed policy changes, she laughed and said, “How many times does an officer approach a tour?”

“Is this an everyday thing?” she asked. “Probably not. So how much change does that really make? It has to be more than that. It has to be awareness, campus-wide, on how people are viewed and how people are treated on their campus, whether they’re students, visitors, vendors or employees.”

Part of a pattern

The high profile of the incident led some people to create fundraising pages online, without the family’s consent. Lorraine Gray asked them to take the pages down and instead donate to her nonprofit, the Four Bridges Traveling Permaculture Institute.

“It’s not that I’m not grateful for people’s compassion, but we don’t want this to be viewed that this happened to just us,” Lorraine Gray said. “This happens to Native people all the time, and it’s important for the country and the world to know. We want funding to go toward programs that will affect changes in the future for a long time and for the greatest amount of people.”

Lorraine Gray said because the details of the event became public, the woman who called the police likely knows she was wrong, and will hopefully never do it again.

“Anybody else out there who’s thinking about using the police to calm their fears about their prejudice, hopefully will think twice,” she said.