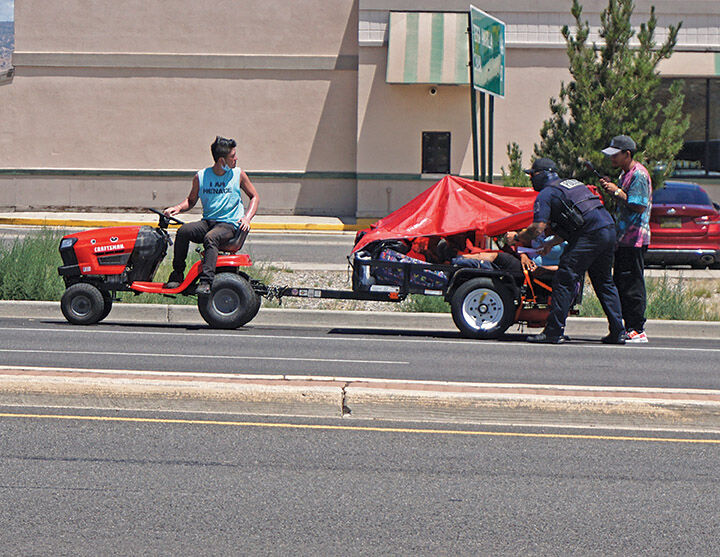 An Española Police officer helps secure a cargo strap on “The Great Grass Race’s” Team Blue’s trailer. Wealthy Guan, on the mower, and Karima Spates (by officer) stopped at Subway for lunch before heading to Taos. They comprise one of five teams competing for $100,000. 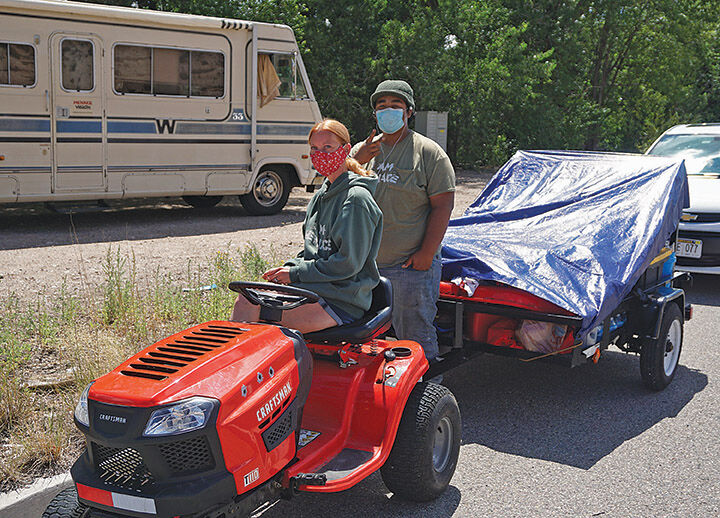 Clinton Brand (standing) and Kassie Sisco are Team Green in the “Great Grass Race.” They stopped for lunch at the Red Hawk Court intersection with U.S. Highway 84/285, before going north through Ojo Caliente to Taos.

An Española Police officer helps secure a cargo strap on “The Great Grass Race’s” Team Blue’s trailer. Wealthy Guan, on the mower, and Karima Spates (by officer) stopped at Subway for lunch before heading to Taos. They comprise one of five teams competing for $100,000.

Clinton Brand (standing) and Kassie Sisco are Team Green in the “Great Grass Race.” They stopped for lunch at the Red Hawk Court intersection with U.S. Highway 84/285, before going north through Ojo Caliente to Taos.

“The Great Grass Race” swung through Española Tuesday as five teams worked their way on riding lawnmowers from Los Angeles to New York. The reality television show promises a $100,000 prize  to the winning team and exposure for 10 people willing to ride a lawnmower 3,500 miles.

Clinton Brand, 22, of Casa Robles, Calif. said his team’s Craftsman was a little tired Tuesday morning as they broke for lunch north of the Dreamcatcher Theater. He and teammate Kassie Sisco were getting about 2 to 3 mph.

Brand said he joined the race because he was homeless in Los Angeles, taking care of his parents.

Sisco, 34, is a model and actress from Newkirk, Okla. She said she challenged herself by facing her fear of flying and took her first flight to Los Angeles to audition.

“I’m hoping to get some exposure and landing some roles from this,” she said.

They left Santa Fe about 7 a.m. and were pleased with their progress. Brand and Sisco are Team Green.

Guan, 24, is a marshal arts instructor from San Francisco and Spates, 44, is  pre-law from Newark, N.J. planning to attend Rutgers University.

Guan and Spates were stopping for a Subway Sandwich and to give their mower a rest. Guan said their mower was in good shape.

“We just got it fixed and it’s running well now,” he said.

The show is the brainchild of creative producer Denis Oliver.

Public Relations Director Robert Frank said Tuesday from Seattle, Wash. that Oliver put casting ads on “tons of websites.” He said Oliver was looking for people who wanted to challenge themselves.

The five teams left Tarzana, Calif. July 9 and Frank said producers were surprised that the teams decided to stay together through the desert and Rocky Mountains.

“I’m not sure they’re still traveling together now and of course you get those reality show alliances,” Frank said.

The teams are at the mercy of people they encounter. They cannot accept money, only help.

“New Mexico has been absolutely great,” Frank said. “You (the state) have a great big generous heart all the way from Gallup, where a woman drove an hour to take one team some soup, all the way to Albuquerque, where a mechanic got parts donated and he repaired, cleaned and tuned every mower.”

Teams average  35 miles a day. If the mower breaks down it’s up to the team to get it repaired.

He was especially tickled by Española Mayor Javier Sanchez sending police and firetrucks to escort the teams through town.

“You’ve got a good one there,” he said of the mayor.

The teams are working their way to Taos and on to Colorado Springs, their next check point. They just finished a challenge to get from Albuquerque to Santa Fe in 24 hours, Frank said.

The show is live-streaming now and can be viewed at watch.menacevision.com.

I saw these folks between Santa Fe and Espanola and wondered what it was all about. So happy to see what it was and not some kind of new protest.