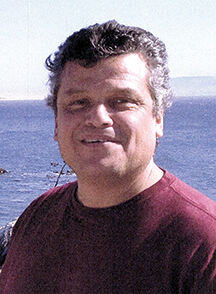 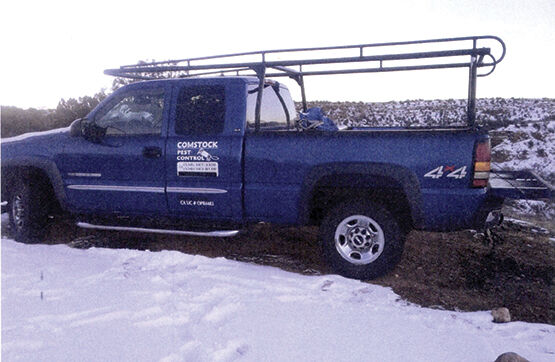 This 2004 Chevrolet 2500 crew cab, belonging to Paul Silvas was found on Forest Road 151, a few miles from Christ of the Desert Monastery. Silvas has not been found and his dog is at the Española Valley Humane Society. Silvas is considered missing.

This 2004 Chevrolet 2500 crew cab, belonging to Paul Silvas was found on Forest Road 151, a few miles from Christ of the Desert Monastery. Silvas has not been found and his dog is at the Española Valley Humane Society. Silvas is considered missing.

From a deputy being approached in the CVS parking lot to a search and rescue mission and scattered family members slowly responding to law enforcement calls, a man’s disappearance near Abiquiú remains a mystery.

Rio Arriba County Sheriff’s Office Sgt. Jack Casias was approached at 2:10 p.m., Dec. 13 by Patrick Valerio in the CVS parking lot. He recounted the conversation in an incident report.

Valerio told Casias that a month prior he had been hunting coyotes off Forest Road 151. At that time he said he noticed a blue Chevrolet pickup parked on the shoulder. No one was around but a black and white dog was under the truck.

Casias wrote that Valerio didn’t think it odd because people park along the road to hunt and fish the Rio Chama above where it enters Abiquiú Lake.

However, Valerio said that morning (Dec. 13) he again went to the same place to hunt and the truck was in the same place, the dog still under the truck.

Casias states he then contact Cpl Chris Gurule and Deputy Johnathan Coriz to discuss the matter. The three went to Forest Road 151, informally known as Christ of the Desert Monastery road. They drove five miles down the forest road and found the truck where Valerio said it would be.

The three approached the truck and the dog came up to meet them. Casias wrote the truck was unlocked and they found a cell phone, vehicle keys, dog treats, fishing gear, sleeping bags, dog beds, and a laptop inside the truck. The truck had a Nevada license plate.

Casias also found an undated note in the truck’s console which states, “I’m going to clear my head, and get rest. I’ll be back soon.”

Casias contacted dispatch and was told the registered owner was Paul Silvas, 56, Reno, Nev. Dispatch also told him Deputy Cedric Patterson, two weeks earlier, had responded to a call in the same area of a 65-year-old man, walking west toward the Monastery, disoriented, dirty, with bruised legs and blood on his white shirt. Patterson reported he could not locate the man at the time.

The trio walked down a ravine where access down the cliff above the river was possible. There they found another cell phone, headphones, some pens and a pad and a Virgin Mary statue.

Casias and Gurule searched the area and Coriz found a way down the cliff side.

From the vehicle owner information and a sign on the truck’s door, dispatch made several calls to people in California and Casias checked with the Reno Police Department.

Messages were left at several places.

Casias notified Rio Arriba County Emergency Manager Alfredo Montoya, who said he would create a search party and gather at the truck’s location.

Late in the evening an old girlfriend of Silvas’s returned a call to dispatch. She said she had not heard from him in years and gave them a number to his brother in California.

At the end of the day, deputies still did not know if Silvas was missing or had been harmed.

The next day Casias checked on the progress of the search party. Montoya said after searching the immediate area the only new information was finding at the base of the cliff a dog bowl and a mug. He also made note someone had filled the dog’s bowl by the truck.

Since there were no signs of foul play and no one had reported Silvas missing, Montoya called off the search.

Silvas’s brother Robert Silvas contacted the Sheriff’s Office Dec. 14 and told Sgt. Craig Yazzie he had not heard from his brother in months.

“The last he heard from (Paul) Silvas he was going to the monastery in the Desert to practice religion,” Yazzie told Casias.

Paul Silvas’s dog was transported to the Española Valley Humane Society for safe-keeping.

Capt. Lorenzo Aguilar said Monday the truck was released to a family member and Paul Silvas is considered missing.

We saw this vehicle on December 9 2020. We called 911 to report the vehicle. We went for a drive in the morning which was the first time we saw the truck. On our way out we noticed it was still parked there, it was already dark by this time. We called 911 to report the vehicle, we found it odd that someone else would be in that area past dark. Dispatch told us they would send an officer to do a welfare check. If this same vehicle was reported multiple times over a two week span, why was nothing done about it?

you're somehow surprised at this?

He is a good friend of mine and we have been searching. A friend of mine sent this to me today. I’m devastated and will be filing an official missing person tomorrow.