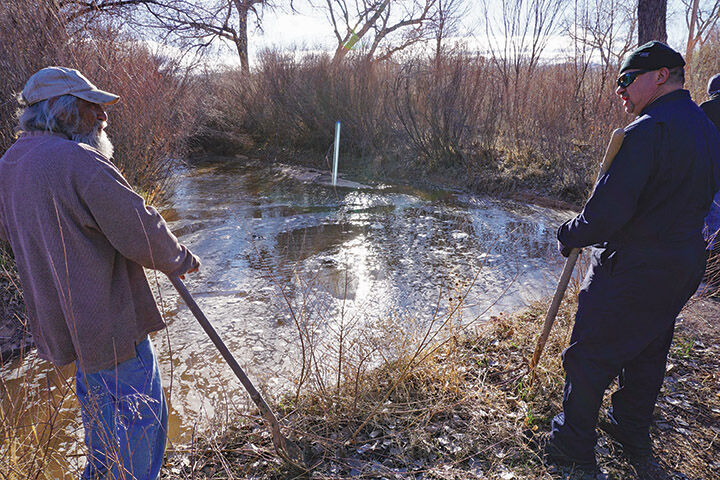 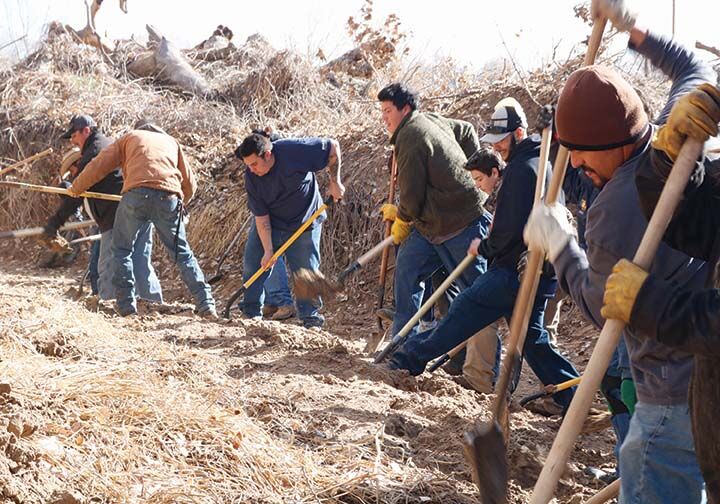 A crew cleans the Alcalde acequia in June 2019.

A crew cleans the Alcalde acequia in June 2019.

Introduced in the House of Representatives, House Bills 30 and 194 aim to provide relief to New Mexico’s acequia parciantes. Both passed the House Agriculture & Water Resources Committee.

HB 30 will clarify that the State Engineer issuing a preliminary water permit before a public hearing is unlawful. Currently before issuing a water permit, the state is required to hold a public meeting for all users impacted by a new water lease.

The bill passed in the House Agriculture and Water Resources Committee after several hours of debate and testimony from acequia members, the Office of the State Engineer and representatives. The bill cleared the House Judiciary Committee and is now on the House temporary calendar

The New Mexico Acequia Association said in a mailer that the state engineer has been allowing preliminary approval of water leases during which the new user can use water immediately.

In the letter the Association was sending to legislators in support of the bill they pointed out a pair of examples of water users being impacted by the preliminary approval policy.

“Acequias in Lincoln County where the OSE granted ‘preliminary approval’ of a water lease were not afforded a public hearing before the State Engineer allowed a municipality to pump water upstream from the acequias. In another egregious example, the State Engineer also granted “preliminary approval” for a lease of over 5,000 acre feet of water on the Lower Pecos River despite potential negative impacts to downstream irrigators and compact deliveries to Texas.”

Water Rights Division Director, for the State Engineer John T. Romero said their office opposed the legislation HB 30. The short term water leases used by the Office are a tool to handle a wide selection of problems Romero said. The average lease only lasts one to five years, with the longest being allowed to be held for 10 years.

Romero said a common one was for farmers, especially in the Roswell Basin, to use five-year counting for their water rights, because some years they may use less water and other years they might use more at the end of the five-year period they can use the short term leases to balance out the water rights between farms.

Construction projects such as the Spaceport and road work have also used the short term leases when they need to use water for parts of their projects, Romero said. Also environmental groups have used the leases to prevent other organizations from using portions of the water.

“We consider it a very useful tool, it spurs economic development, there’s a lot of positives that comes out of it, we would like to see the tool kept in place,” Romero said. “The bill would stop it. We’re seeing the acequia community, especially the Acequia Association, they seem to be in favor of the bill.”

Romero said the protest method in place can take some time, usually from six months to a year, but sometimes longer, however there were other processes the acequias could use that stop a lease from happening before it even gets to the Office.

“There are other laws, statutes in palace that give acequias rights to first refusal, so they would have to approve it in the first place,” Romero said. “They can stop it before anything, now they have to have bylaws in place, but they can stop it in its tracks before we do anything on an application that comes into our place.”

Despite those uses, and the protection the acequias directly have, Paula Garcia, the director of the New Mexico Acequia Association, said short term preliminary leases have caused damage to New Mexico’s water supply, impairing acequias either up or downstream from where a lease was issued and put the state’s obligations to provide water to Texas at risk.

“About a decade ago they started using a different interpretation of the water lease act,” Garcia said. “Those leases are supposed to go through the same process as any other transfer but a lot of industry needed water fast. The State Engineer started approving usages of water before there was a public hearing, mostly in the Permian basin. It wasn’t until 2015 when there was an application that affected multiple acequias in Lincoln County.”

Enrique Romero, the Director of Legal Services for the Acequia Association said the problem occurred on the Rio Hondo Watershed in Lincoln County.

“You had a municipality applying for three permits, and they were upstream from the senior acequias,” Enrique Romero said. “Two of the leases were withdrawn and one went on for six or seven years.”

Jackie Powell, one of the parciantes in the Hondo Valley was affected by the preliminary approval in Lincoln county.

“That lawsuit cost us close to $70,000,” Powell said. “For us small little people, that’s hard. In 2014 the village of Ruidoso leased 300 acre feet off the Rio Ruidoso and they were transferring them 25 miles upstream. We have 35 acequias on the Rio Ruidoso and it affected every single one of them. When they filed the transfer there were over 200 protests, and this is a narrow valley.”

The lease also affected four or five unincorporated communities Powell said. Because the water was being sold from someone downstream to a municipality upstream it affected everyone in the middle, which exacerbated the ongoing drought conditions.

“In drought situations we don’t get 100 percent of our water, we share, that’s what acequias are,” Powell said. “The Village of Ruidoso they dropped the permit because it was too expensive for them to fight all of us, and they weren’t even getting the water they purchased through the lease.”

Many of the acequia users left the lawsuits after the Village dropped the lease, but Powell said that a few others stayed on to try and sue for the missing water.

“You never get that water back, the municipality wouldn’t pay back in wet water they would pay back in paper credits,” Powell said. “Water on paper is not the same as wet water”

After the court cases in the Rio Hondo watershed Enrique Romero said the Office became less transparent. The current state engineer has been helpful but his experiences with other engineers and the wide amount of latitude district offices are given in assigning leases meant they wanted legal support.

“We keep our eye on legal notices,” Enrique Romero said. “When you look at the notices sometimes they will reference that the application is being processed under the water use lease act. It’s unclear what ones are under preliminary approval. We need the language changed so we don’t have to rely on a friendly engineer. District offices are given a wide latitude of discretion, it’s a double edged sword.”

The second bill, HB 194, passed unanimously adds “settlement implementation” to the Acequia and Community Ditch fund. It will next be heard in the House State Government, Elections and Indian Affairs Committee.

The Fund was created in 1988 to provide assistance with legal representation for acequia parciantes.

The Association said it’s become clear over the years that some of these funds need to be used to help resolve settlements.

Rep. Kristina Ortez, D-Taos, is the sponsor of HB 194, and is the commissioner on her community ditch, which had to be revitalized.

“In the process of bringing our acequia online again, we had to consult our settlement documents,” Ortez said. “In doing so I developed relationships with members of the Taos Valley Acequia Association.”

Doing so Ortez said she discovered there were plenty of issues with implementation even after a settlement was reached.

“It’s really hard for the acequias, they’re all parciantes, they’re all volunteers, they need support,” Ortez said. “Reviewing documents, ensuring technical aspects of the implementation are enforced and in compliance. The work doesn’t stop when the final decree is signed.”

The change will allow acequias to access the Acequia and Community Ditch Fund for the sake of getting legal help in the implementation stage of settlements.