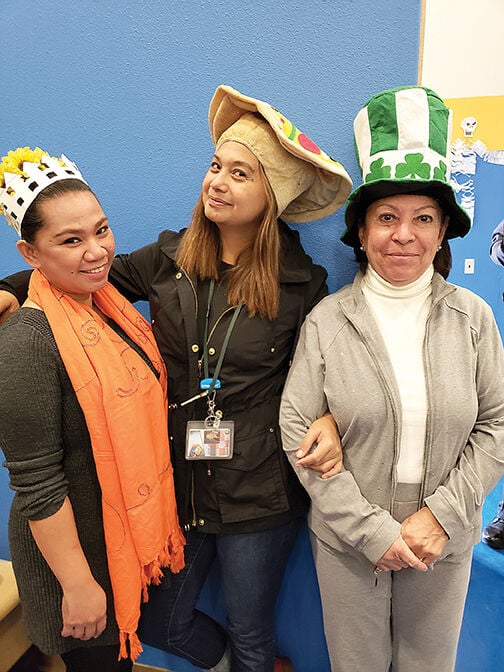 Sarrah Bonrostro (left) and Elizabeth Divinagracia previously worked with Linda Miller as teachers. Miller is retiring after a nearly 50-year teaching career, with all but two years being a teacher at Sombrillo Elementary. 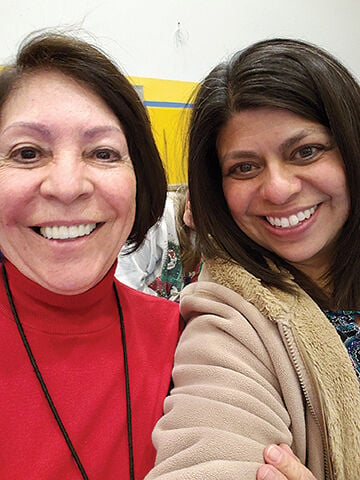 Linda Miller (left) and Melissa Valencia pose together. Miller and Valencia worked together as fourth-grade teachers in neighboring classrooms for a decade.

Sarrah Bonrostro (left) and Elizabeth Divinagracia previously worked with Linda Miller as teachers. Miller is retiring after a nearly 50-year teaching career, with all but two years being a teacher at Sombrillo Elementary.

Linda Miller (left) and Melissa Valencia pose together. Miller and Valencia worked together as fourth-grade teachers in neighboring classrooms for a decade.

Linda Miller’s inspiration for teaching began with a college internship.

She spent a summer in Spokane, Wash., working with juvenile delinquents, because she wanted to try living in a new place. She saw there how many children were “wonderful kids with horrible experiences,” and were neglected by their parents, society or educators, which drove them to do terrible things.

“By spending that summer time with them, and talking to them and learning about, ‘How did you get here, and what drove you to do what you did?’ it made me realize that if I wanted to make an impact in life with anyone, I think I could do it as being a teacher,” Miller said.

That experience led her to education, which became her entire life. Miller just retired after 47 years as a teacher at Sombrillo Elementary.

Miller grew up in El Guique as Hazel Linda Martinez, attended San Juan Elementary, and graduated from Española High School in 1968. Her father, Willie, was a teacher for 35 years.

She went to Colorado for college, two years at Adams State and two at University of Southern Colorado (now Colorado State University-Pueblo.) After graduating, she taught for two years in Colorado before moving back home to Española.

She applied to Española Public Schools, and said it was “luck of the draw” that she was placed at Sombrillo Elementary, where she would spend nearly her entire career. Miller started at Sombrillo in 1974, and taught through the end of 2020.

Bobbie Gutierrez, a former District superintendent who previously worked at Sombrillo, wrote in a text message that “(Miller’s) work spoke volumes for her school and the district.”

Melissa Valencia, a third grade teacher at Sombrillo, also went to school there as a child, and said even then she was disappointed to not be in Miller’s class. She said Miller is always able to find the bright side of heavy moments, and tell a joke when it was needed.

On Valencia’s first day as a teacher at Sombrillo, she was moving into Miller’s old classroom. In their first encounter, Miller broke the ice by saying to her, “Good luck with the air conditioner, because I’m hot flashing and I need to move to another classroom.”

Miller was a third-grade and then fourth-grade teacher for about 10 years each, and most recently became the school’s bilingual teacher. She said she was scared of the position at first, but grew to love it through being able to teach different grade levels.

“While I am delighted for Linda in retiring, it is a loss for EPS,” Gutierrez wrote. “She is an amazing and knowledgeable teacher and educator and the ‘master’ of bilingual education. She provided training, mentoring and professional development for bilingual education, and the District often sent new or struggling bilingual teachers to Ms. Miller’s class to observe. She was always kind, helpful and supportive of other teachers, and clearly loved her work and her students. She will be missed.”

Miller and Valencia both taught fourth grade in separate classrooms for several years. Valencia said when she was moved to third grade, Miller encouraged her, and told her that third grade was very important to help prepare students for fourth grade.

When they were fourth-grade partners, the school did not have a designated time for physical education, so they would coordinate activities together. One day, Valencia said, Miller decided to have a class versus class kickball game. Miller pitched the ball, someone kicked it, and all the children watched the ball roll past them.

Miller then decided to run after the ball and then toward the base. At which point she was run over by one of the students. When Valencia ran over to check on the sprawled-out teacher, she saw that Miller was laughing the entire time, and she said, “I guess I should have known better.”

But Miller also taught Valencia more serious matters, including how to help a student dealing with the loss of a family member.

Miller said she worked hard to get students to museums, even though funds were tough to come by and even though it often meant traveling down to Albuquerque.

Miller retired for the first time in 2005. She said she initially returned as a helper at the request of an administrator, but realized she had to return.

Miller said she’s noticed plenty of changes over the years. When she first started, she said, there would be at most five students in a class who came from single-parent homes. Now, she said, there might be two in a classroom who have a traditional two-parent family, while everyone else has one parent or grandparents or other family structures. Having an unstable home can hurt a child’s education.

While cleaning out her storage unit in December, Miller found folders from the school plays she directed starting in 1996 with The Wizard of Oz. She loved watching children blossom on stage, and have the chance to be in school but be something other than a student.

Through all her time as a teacher, though, Miller never had anything like 2020 in working with students, when schools closed and went online.

Miller struggled with her last year as a teacher being virtual, though Valencia helped her set up the technology. Valencia said Miller calls herself “old school.”

Miller herself was able to adjust to the change, but it still made learning difficult for students. She works with several grades as the bilingual teacher, and said virtual learning is especially hard for kindergarteners.

“Kindergarten needs hands-on experiences,” Miller said. “They need to touch and feel, and develop and feel things. You can’t do that on a computer. That’s not education. But that’s what we’re stuck with.”

Miller said she had not planned to retire this year, but family matters arose with her 93-year-old mother, Lydia, needing extra attention, so she decided to fully retire.

Valencia said when teachers would introduce themselves, Miller would rarely reveal how many years she had been a teacher.

“She would tell them, ‘I taught with the dinosaurs,’ or she’ll tell them ‘I’m part of the furniture,’” Valencia said. “I’ll tell you one thing, we’re going to totally miss that part of our furniture at our school.”