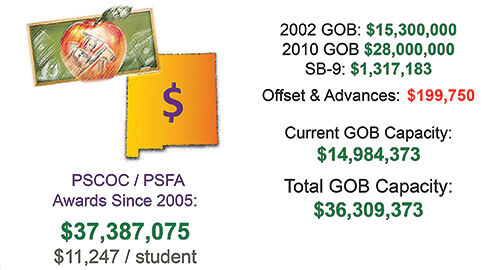 This slide shows the total versus currently encumbered bonding capacity of the school District. 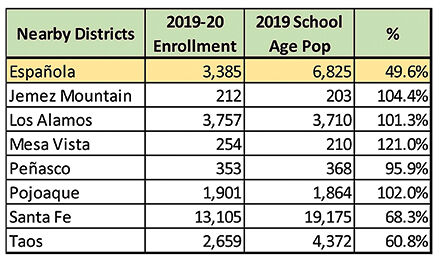 Over half of school-aged children in the Espanola school district leave for other schools. The District must regain some of the lost students to better qualify for state funding. 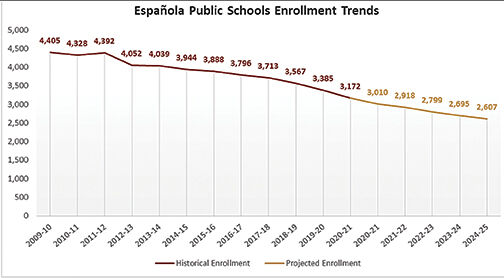 This slide shows the total versus currently encumbered bonding capacity of the school District.

Over half of school-aged children in the Espanola school district leave for other schools. The District must regain some of the lost students to better qualify for state funding.

The Española School District requires $120 million for repair, renovation and replacement costs for its existing buildings, according to an extended examination of needs and facilities by Certified Educational Facilities Planner Marilyn Strube.

She presented her findings to the Board Aug. 19 which are the result of a master plan, the culmination of almost a year’s work. Strube made a powerpoint presentation to the Board, highlighting the District’s ample space and dwindling student population.

The purpose of the presentation was to show the Board what the District’s needs are, what they are using and what the state considers when funding projects and helping schools with infrastructure issues.

The process began June 17,  2020 with a review by Strube’s team, followed by a strategic plan and School Board review in the fall.

District Core and steering committee meetings took place up through June 7. Administration and department heads comprised the Core Committee and 20-25 members of the community and District staff made up the Community Committee.

Results paint a bleak picture for the District. American Community Survey 5-year estimates put the median age of Rio Arriba County at 41.3 years. The District’s service area is a little lower at 38.4. The school age population is about 27 percent. Strube said this was a good number, not great.

Strube’s work showed 49.6 percent of the school aged population attended Española schools. During the 2020 school year 3,653 students were attending schools out of the District and 3,172 were attending Española School District.

During the same period Pojoaque had 102 percent, Jemez Mountain had 104.6 percent, Los Alamos had 101.3 percent and Mesa Vista had 121 percent. She said this demonstrated Española School District students bleeding off to surrounding districts.

The biggest factor for student loss is McCurdy Charter School’s 540 students, Strube said. This was followed by Los Alamos, with 324 and Pojoaque with 303.

Following the decline in student enrollment, Strube projected the District’s population will fall from 3,010 this year to 2,507 in the 2024-25 school year.

On the other side of the capacity equation is how much space the District has in which to educate students. Strube said the 11 elementary schools use about one-third their square footage capacity.

“Only four elementary schools have over 200 students and they still fall way short of capacity,” Strube said.

Five elementary schools are under 100 students.

Española Middle School’s 474 student enrollment is far below its 1,141 capacity. Española Valley High School could hold 1,554 students and is at 844. Strube said this represents 223,137 square feet of under-utilized facility space.

Los Niños Kindergarten is the only facility operating above the level the state wants to see. It is at 97 percent, one percent above the state’s guideline. There are four elementary schools in the lower 80 percent use. The other schools fall to 70 to low 60 percent use down to the High School at 39 percent.

Strube compared the District’s enrollment to that of 14 other New Mexico school districts. Española fell in the middle with 3,172 students, between Alamogordo ‘s 5,580 and Moriarty-Edgewood’s 2,174.

Comparing those same districts to geographic size, Española was the largest with 3,929 square miles. City density and population centers were not taken into account.

However, comparing the number of elementary schools to the other 14 similar-sized districts, Española again stood out with 11. Alamogordo was the closest district with nine. Seven more had five to seven elementary schools and six had two to five.

The number of schools, their sizes and student counts all come together to determine funding from selling bonds and getting help from the state in the form of Public Schools Facilities Authority (PSFA) and Public School Capital Outlay Council (PSCOC). The two funding entities have awarded the District $37,387,075 since 2005.

Through Fiscal Year 2018 to receive these funds a district must match the state’s contribution by about half, or 37 percent paid by the district and 63 percent by the state.

However, to get that help with funding from the state two things must happen. First the school must have its part of the funding. The District is not in a financial position to match state funds right now. It also only has $15 million in bonding capacity. The 2002 and 2010 general obligation bonds are still being paid down and currently total $21.3 million of the District’s bonding capacity.

The second issue is the school for which the district is requesting funds must be toward the top of PSFA’s facility ranking. Chimayó Elementary currently ranks sixth in the state and qualifies for $4.2 million of $9.4 million of repairs. The District must pay the remaining $5.2 million. Dixon and Hernandez are in the top 100 and would also probably qualify for some state funding.

However, Española School District suffers a third problem. The District was awarded in 2011 $3.2 million for improvements to Abiquiú and in 2015 it was awarded $5.3 million for work at Velarde Elementary. That work has still not been accomplished, resulting in the state funding not being spent.

Board members did not address those two awards.

Lastly the state will look at the District’s low population in relation to its large capacity and question whether improvements are needed in schools with fewer than 200 students.

Strube went through the committee’s recommendations for school improvements. It placed Abiquiú at the top with partial funding in place. It was followed by Chimayó, the Middle School and Dixon. Velarde was placed last with no explanation from committee members.

The Board was supposed to approve the plan but it was not on the agenda as an action item.

Board member Matthew Casados said he was stunned by the amount of information.

“Can you sum this up in a few sentences?” he said.

“You’ve got 400,000 square feet of space and the state thinks you don’t need that amount unless the (student) population comes up,” she said.

Casados said this is a branding and parental buy-in issue.

“Parents don’t understand square footage and utility costs,” he said. “It’s going to come down to them not leaving, staying in the District and participating in the schools.”

Board member Jeremy Maestas said that will be difficult because of the condition of the schools.

“Hernandez and Abiquiú population is down because of the state of the schools,” he said. “You won’t send your child to schools that smell like sewer, boards for windows and can’t get paint.”