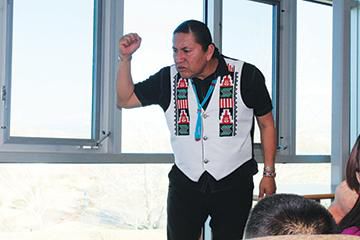 (SUNfoto by Ariel Carmona) Storyteller and children’s book author Emmett Shkeme Garcia recounts the story of how the rabbit got its long ears, one of many native legends he told during an event, March 9, at Northern New Mexico College’s library. The event was sponsored by the College’s Northern Pueblos Institute, for the cultural benefit of students, faculty and the College community. 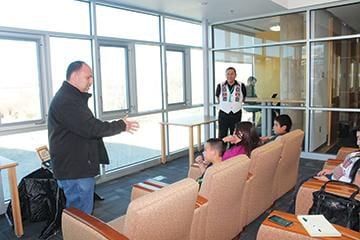 (SUNfoto by Ariel Carmona) Storyteller and children’s book author Emmett Shkeme Garcia recounts the story of how the rabbit got its long ears, one of many native legends he told during an event, March 9, at Northern New Mexico College’s library. The event was sponsored by the College’s Northern Pueblos Institute, for the cultural benefit of students, faculty and the College community.

Emmett Shkeme Garcia calls himself one of the last storytellers in New Mexico.

The award winning children’s author and storyteller from the Santa Ana Pueblo, visited Northern New Mexico College, March 2, and brought his unique style of sharing the oral traditions of his elders, by telling stories about diverse topics like the creation of the seasons, coyote legends and legends about how animals came to be.

Garcia said the rural tribes native to the region, like the Navajos, told stories that are as vibrant as the diverse pueblo cultures. He said grandmothers and elders would carry on the tradition of telling stories to the youth and every time an elder passed away, the stories went with them, which is important to him that the stories live on.

In addition to being a cultural educator, he is a dancer and lead singer of the Native American reggae band Native Roots.

The University of New Mexico Press published his first children’s book, “Coyote and the Sky” in October 2006 and followed that up with, “Sister Rabbit’s Tricks” in 2013.

“Times have changed,” Garcia said. “In the native New Mexican communities, grandparents told stories about the land. Our stories are about our traditions and some tribes still carry that on. Without these stories, the traditions don’t get passed on, so I am one of the few who travels and shares these stories.”

Some of the stories Garcia shared emphasized the rural nature of life and feature animals as the main protagonists. One such story tells the tale of how dogs came to be.

“If you treat a dog right, he will give up his own life so you can live longer,” he said. “They say sometimes when an owner passes away, soon after, his or her dog will too, so they can protect their owner in the next life.”

He said one of his favorite characters is Coyote the Trickster. Coyote stories usually teach listeners and children lessons, and usually deals with karma.

Garcia said “what comes around goes around” is a recurring theme in these tales, but they all end on a positive note, with something in the world being created.

He said in the old days, elders would not scold children, they would instead tell them a coyote story to teach them lessons or show them what the repercussions of their actions would be.

“A lot of the lessons are about learning how to listen,” he said. “In our traditions, when the great spirit was creating the world, the first animal he made was the rabbit.”

How the rabbit got his long ears is one of the many legends incorporated in Garcia’s storytelling and these legends form the basis of his books.

He travels to various schools throughout the state to share the stories and give back to the community, emphasizing the oral form of storytelling.

Garcia said a lot of the stories are rural in origin, reflecting the agricultural traditions and culture of the state. He tries to encourage others to share their stories.

He said storytelling is an art form and in today’s highly technological society, it is important to pass down tales about how different things came to be in the world, and to retell the legends, which offer different lessons about life. He enjoys watching children absorb the legends and lessons behind the stories.

“I really love stuff like this,” he said. “I have seen him before in a previous reading and he always does a great job of entertaining and educating, in my opinion. I have always been interested in creative writing and reading, so I try to expose myself to various genres. I don’t think there are a lot of people who can do what he does so well.”

David Garcia, instructor of Basic Adult Education at the College, said it was important for his students attending the event to experience the oral traditions of storytelling.

“We are all made of stories,” he said. “It’s one of the important things to share. Some people’s lives are a thick book and others have volumes to share.”

Matthew Martinez, director of Northern Pueblos Institute at the College, said the institution is always looking to share the rich history and culture of the area.

“I think it’s important to bring people these universal stories,” he said. “We come from a community full of history and culture and any forum where we can showcase that, we will. These stories are universal and every one can connect with them. They bring people together, it’s an honor to be able to celebrate that.”