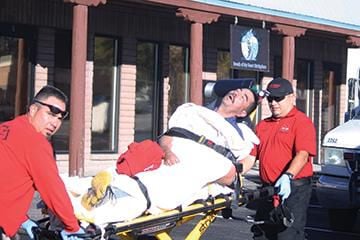 (SUNfile foto) Medics wheel Raymond Martinez, 51, toward an ambulance Nov. 18, 2015, after he was reported to be overdosing behind a building on La Joya Street. He was seen shooting up before he passed out. Medics were able to revive him from his non-fatal overdose. 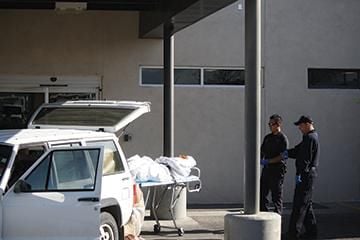 (SUNfile foto) Española firefighters Enrico Trujillo (left) and John Wickersham get ready to help load the body of 27-year-old Adam Wallington, of Nambé, into the back of a mortuary vehicle April 23, 2015. Wallington’s friends brought his body April 23, 2015, to the Española Hospital emergency room and attempted to drop him off. He died from a heroin overdose after being released the previous day from jail. He had been locked up for a month.

(SUNgrafic) The graph above shows all drug overdose deaths in Rio Arriba County, from 1995 to 2015. The lowest number of drug-related deaths was reported in 2001, when only seven residents died from overdoses.

(SUNfile foto) Medics wheel Raymond Martinez, 51, toward an ambulance Nov. 18, 2015, after he was reported to be overdosing behind a building on La Joya Street. He was seen shooting up before he passed out. Medics were able to revive him from his non-fatal overdose.

(SUNfile foto) Española firefighters Enrico Trujillo (left) and John Wickersham get ready to help load the body of 27-year-old Adam Wallington, of Nambé, into the back of a mortuary vehicle April 23, 2015. Wallington’s friends brought his body April 23, 2015, to the Española Hospital emergency room and attempted to drop him off. He died from a heroin overdose after being released the previous day from jail. He had been locked up for a month.

(SUNgrafic) The graph above shows all drug overdose deaths in Rio Arriba County, from 1995 to 2015. The lowest number of drug-related deaths was reported in 2001, when only seven residents died from overdoses.

While the number of overdoses may have declined, it still puts Rio Arriba County and Española far above all national and state averages.

Heroin continued its trend of being involved in a majority of overdoses. It was involved in 17 of the 24 deaths, or 70 percent. Three deaths were caused by heroin, alone.

Opiates garnered an even larger portion, being involved in 20 of the 23 deaths, or 87 percent. Heroin is an opiate.

The third most-involved drug was alcohol, contributing to 13 deaths, or 54 percent. Alcohol-only overdoses were not counted.

Prescription drugs, including the opiate methadone, were responsible for nine deaths, or 37 percent, while cocaine was involved in six, or 25 percent.

The Rio Grande SUN reviewed 102 autopsy reports produced by the Office of the Medical Investigator, following an Inspection of Public Records Act request, part of the SUN’s annual review of overdose deaths in Rio Arriba County.

Office Records Custodian Rebecca Montoya said, on June 1, that there were still four or five autopsies that had not yet been completed from 2015.

The review does not include deaths that happened on either the Santa Clara Pueblo, Ohkay Owingeh pueblo, Jicarilla Apache Nation or in Santa Fe County, which includes parts of Española, Chimayó and Santa Cruz.

One death, not counted toward the 23 total, happened in Arroyo Seco, but the Office pathologist declared it as being in Rio Arriba County.

For every death (listed on pages A5 and A7), a pathologist concluded the consumption of drugs was at fault.

The review only counted unintentional overdoses, although no suicides were committed through the use of drugs this year.

The pathologists read police reports, medical histories and inventories of the death scenes, as well as inventories of the bodies. Investigators with the Office also do their own investigations, in conjunction with police. Toxicology tests of the decedent’s blood are done, as well as an autopsy, to determine the manner, means and cause of death. In each of these cases, the manner of death was accident, as opposed to suicide, homicide or natural.

When it came to location, Española had 11 deaths within city limits, while four happened on the Rio Arriba County side of Chimayó, three in Alcalde, two in Velarde, one in Hernandez and one in Tierra Amarilla.

Two specific death locations could not be determined, due to a lack of police reports.

Per capita numbers are used to compare rates between areas of different , by making a comparison at the same rate, per 100,000 people. The per capita rates were calculated using the U.S. Census Bureau’s statistical abstract for the County’s and Española’s population in 2015.

Only two of the Española deaths were of those who had been dropped off, already dead, at the hospital.

Rio Arriba County’s reduction in overdose deaths tracks with the rest of the state, which saw a 9 percent reduction overall, decreasing to 492 fatal deaths from 2014’s 540 fatal overdoses, according to preliminary Department of Health data.

Española Police Officer Greg Esparza said within the past year, he has noticed an increase in the use of Narcan, also known by its generic name, naloxone, by those who are around the person who is overdosing.

Esparza started his law enforcement career with the Rio Arriba County Sheriff’s Office for two years, then moved to the city police department. He has been in law enforcement for seven years.

Officer Lee Lopez, currently on patrol, but assigned last school year to Española Valley High School, said she has noticed the same trend. More and more, friends, neighbors or family members will have administered Narcan to the person overdosing, before police and medics even arrive. Lopez has been a police officer with the Department for three years.

One time, Esparza encountered the same man, for three consecutive days. Each time he came into contact with him, he was overdosing, and each time, the neighbor came over and gave him a dose of Narcan.

“He was awake but pissed off at the neighbor for calling us,” Esparza said

He said while heroin is the cause in the majority of overdoses, once in a while, they will have to deal with someone high, and possibly overdosing, on methamphetamine.

In those cases, the person overdosing expresses a high level of paranoia — about the police, their surroundings and everything else.

The only extreme incident Esparza said he could remember was the case of a man who was overdosing, but his father had a problem with one of the responders and ended up being arrested so they could provide emergency care. The man later died from his overdose.

Esparza said fatal overdoses in the city are rarer, but when they do happen, it is usually someone who had been dead for some time before being found. Although he has not needed to perform CPR in city limits, he did respond to a call on El Llano Road with State Police, where he had to keep an overdosing person from dying by performing CPR.

City police officers have it a little easier than deputies, because the response time for emergency medical responders, either firefighters or ambulance medics, is so quick, often within minutes of the initial call.

He said when he is at an overdose call, his primary concern is to make sure that the person having the medical emergency lives.

Agua Sana Volunteer Fire Chief Alfredo Montoya has been working in emergency medical services for 12 years. He responds to calls most of the time in his capacity as a volunteer firefighter and emergency medical technician in Hernandez.

Montoya is also a medic, specifically, an emergency medical technician intermediate, for Presbyterian Health Services, that runs the ambulance service in the County.

Montoya confirmed Esparza’s prognosis for fatal overdoses — most of the time, the person died long before they were discovered.

He said he has found many younger individuals overdosing on various prescription drugs bought on the street, as well as drugs that occupy a semi-legal status, such as synthetic cannabinoids, also called spice.

Although they may not be truthful with medics for a variety of reasons, one reason may be a fear of being arrested.

However, in New Mexico, police are not allowed to arrest anyone for possession of a controlled substance when they are called out to an overdose call, a first-of-its-kind protection when it was originally enacted in 1996.

“We respond to one to two overdoses a day when we’re on shift,” Montoya said.

He said fatal overdoses are far fewer and, according to 2015’s number of deaths, they happened, on average, twice a month in 2015.

Montoya said many times, he and other medics must apply at least two doses of Narcan to a patient to get him or her to wake up, but, most of the time, they’re hoping for an opiate overdose because they have the temporary antidote, whereas reversing the effects of other overdoses is not easy.

By the time medics arrive to the scene of opiate overdoses oftentimes, Narcan has already been applied at least once, he said.

“There’s been a huge increase in the amount of Narcan these known addicts have on them, and that their family members have on them,” he said.

When it comes to families helping medics, a certain level of calm makes it much easier for firefighters, medics and law enforcement all to communicate with each other.

“The family usually gathers around out of being worried, and they’re hysterical and law enforcement tries their best to calm them before we arrive,” Montoya said. “But reassuring the family that after we get there, we’re doing everything (we can) try to try fix the situation.”

What is toughest on Montoya, and his fellow medics and firefighters, has been responding to calls involving his friends or people with whom he went to high school.

“That is often been the hardest, to tell (the parents of) a friend of yours, that their loved one is dead,” he said.

Most of those memories, from bad cases, get pushed to the back of the mind, with the intention of being lost in the psyche, pushed away from day-to-day thoughts.

One issue Montoya faces directly, as fire chief, is getting new volunteer medics trained. Before, medics had to go, twice a week, for six months, to a class that lasted for four hours each night. The updated standards and classes have increased that time to six hours a night, twice a week.

“For anybody that has any sort of family or full-time job, or both, that’s almost impossible,” he said.

In addition to getting licensed as a basic or intermediate emergency medical technician, depending on the level, another 16 to 24 hours of continuing education are required each year to keep the license.