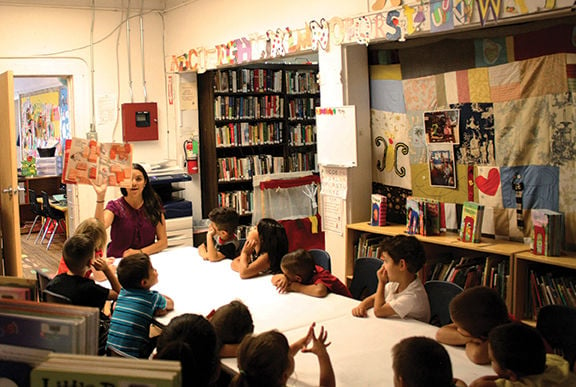 Truchas Library Director Julie Trujillo reads “Billions of Bricks” to children, July 11, in the STEM to Read program. The program is held from 12:30 to 1:30 p.m., every Tuesday and Thursday, in the library. 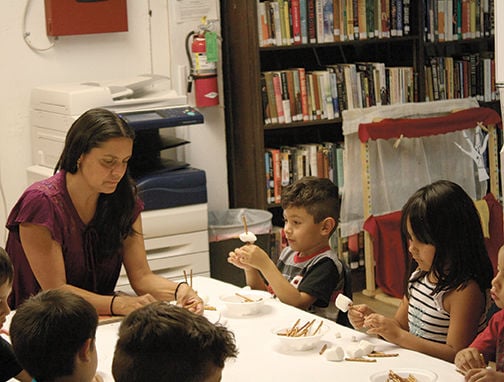 Truchas Library Director Julie Trujillo reads “Billions of Bricks” to children, July 11, in the STEM to Read program. The program is held from 12:30 to 1:30 p.m., every Tuesday and Thursday, in the library.

After a full afternoon of listening to a book called “Billions of Bricks,” followed by building — but mostly eating — snowmen made of pretzels and marshmallows, a group of children occupied themselves in the Truchas Preschool, waiting for their parents to pick them up.

Most of the children were happy to see their parents, but Jayden Sandoval, 4, started crying in the arms of his grandmother Julie Sandoval, 51, when she got to the door.

Jayden Sandoval is one of 17 students in the Truchas Preschool to participate in the library’s STEM (Science, Technology, Engineering and Math) to Read Program, a pre-literacy pilot program focused on science, technology, engineering and mathematics, funded through a grant from the New Mexico Library Foundation and United Way of Northern New Mexico, that was introduced, three years ago, to four Rio Arriba Independent Libraries.

Although the grant funding has run its course, three of the four libraries that participated in the pilot program ⎯ Truchas, Embudo and El Rito ⎯ plan on continuing the program.

Embudo Library Director Felicity Fonseca said most of the foundation for the program came through training provided by the New Mexico Library Association.

The New Mexico State Library created activity trunks, which can be borrowed by any public library for a period of six- to eight-weeks, containing books, lesson plans and materials on a variety of STEM components including water, motion and chemistry.

Deanne Dekle,  New Mexico State Library youth services and outreach consultant, said the library created 16 trunks that have been used by over 3,000 people at 23 libraries in the state.

The program also focused on modeling good parenting skills, so parents and caretakers can continue STEM and pre-literacy teaching at home.

Kelly Torres is a parent-turned-teacher at the Truchas Preschool and has been the lead teacher there since November 2016.

She brings her daughter Kylie, 5, to the class and teaches 16 other children from 9 a.m., to 1:30 p.m., Monday through Thursday, with the help of her other teachers, Kymberley Montoya and Loretta Martinez.

Library Director Julie Trujillo holds the library’s STEM to Read Program. from 12:30 to 1:30 p.m., every Tuesday and Thursday, with the students in the preschool class.

Trujillo said the library already had a summer reading program before receiving the grant and she hasn’t had to change it much.

“We were probably using STEM and didn’t even know it,” she said.

Virginia Padilla, head librarian at Truchas for the last 10 years, said they focus on getting the children involved with hands-on activities.

“It’s not just reading, but showing the kids manual skills too,”she said. “The kids really get into it.”

Torres said the preschool had a lot more open space and less work stations for the children when she started, and it was difficult to make the children focus.

Once Preschool Director Lorraine Sandoval implemented a curriculum and provided more building blocks and toys for the children, using the grant money, the situation was easier to manage, Torres said.

“When (the children) have something to focus on it really relaxes them,” she said.

The Truchas Preschool, established in 1972, currently has a waiting list of 14 children.

Jessica Molla brought her daughter to the library’s STEM to read program when she was 3 years old, and decided to start teaching it two years ago, after Fonseca made an announcement that the program was looking for teachers.

She and her husband Chris Molla have a background as musicians performing for children and decided to implement a 30-minute music session in the program.

Fonseca said the music session has gone a long way toward teaching the children rhythm, how to take turns, read and recognize names.

“The music and story time is perfect for those toddlers,” she said.

Fonseca brought her children to the program, before she was a library employee, and she said it was a big part of their learning experience.

“There’s plenty of learning going on and a lot of it is social and emotional,” she said.

The program draws about 10 to 12 students each week.

Jessica Molla also has a background in STEM education and implemented a hands-on STEM lab in the program.

Gaia Khan, wife of Embudo Library Board Member Siddiq Khan, said she brought her two sons, ages 7 and 5, to the program, weekly, until they were too old to participate.

“I really appreciate that the library continues to support (the program),” she said. “It has been really valuable to a lot of kids in the community.”

The library has included STEM curriculum in its afterschool and summer reading programs, as well.

The Caterpillar Club, the library’s STEM to Read program, is held from 10:30 a.m. to noon, Wednesdays at the Community Center, next door to the library.

When Lynett Gillette took over as library director two years ago, a focus on STEM education wasn’t hard to adapt to, given her background in geology.

The addition of experienced science teacher Mary Shoemaker a year-and-a-half into the program, who forgoes payment for half the time she teaches the program, bolstered it and helped keep it alive.

“That’s a huge gift,” Gillette said. “Personnel costs are the biggest expense (at the library).”

Shoemaker works for the Los Alamos National Laboratory Foundation as a trainer and teacher for its Inquiry Science Education Consortium — a program dedicated to increasing access to quality STEM education for students grade K through six.

She said she chose to donate her time because she loves the library and realizes the impact the program has had on the children.

“My little group of 2 to 5 year olds brought me so much joy watching them learn about science and follow their interests,” she said.

Most of the children in the area get only family interaction when growing up and aren’t exposed to peer groups often, she said.

The STEM to Read Program allows these children the opportunity to get used to learning environments and learn to follow directions.

Shoemaker said this is extremely helpful once the children transition into elementary school.

“(The children) who have been in the STEM group hit the ground running,” she said. “They are ready to be in social situations and they listen and participate when stories are read.”

For a community of a little more than 800 residents, attendance has been a struggle.

Gillette said the weekly class, which ended in May, received an average of four children each class, and sometimes more parents than children showed up.

To remedy that, Gillette and Shoemaker began making monthly visits, in January, to the El Rito Elementary School.

Through those visits, they have reached an additional 15 to 20 students each month.

The library invited its STEM class children to participate in its summer reading program and its STEM to read program will resume Sept. 14.

The program is held from 10:30 a.m. to noon, Wednesdays at the library.

When the STEM to Read Program launched, The Pueblo de Abiquiú Library had trouble getting children ages three to five, to attend.

Program co-leader Isabel R. de Lopez said most of the parents in the area work during the day and leave their children with someone who is either without a car, or is unable to drive.

After this rocky start, library officials decided to expand the program to serve the Canoñes Early Learning Center and the YDI Headstart in Abiquiú.

She and Library Director Isabel Trujillo taught STEM to 22 students between Canoñes and the headstart, every other week.

Lopez said she didn’t get to see the children as often as she would in a classroom setting, but her own granddaughter attended the classes and learned the word experiment.

“Once you plant a seed in that kid and get them excited, it stays there,” she said.

Although library officials don’t plan to continue the specific STEM to read program, Librarian Rosalia Triana teaches STEM through the summer reading program, which has 30 children, ages six to 18.

Triana taught for 40 years and has a background in biology and algebra.

“Learning about the acequias, geology and ecology is so important here,” she said.

Triana said she comes from an engineering family and tries to explain to the children, that engineering isn’t a fancy practice reserved only for college students, it can be as simple as figuring out how to fix a bicycle.

Lopez said the grant funding went mostly toward materials, books and paying instructors, but there was a month where they had to use a portion of the grant money for their heating bill.

The library doesn’t currently have plans to continue its STEM to Read program, but its Summer Reading program is held from 10 a.m. to 11:30 a.m., Wednesdays at the library.

The latest draft of the Rio Arriba County budget, submitted June 30, includes a complete cut of funding for rural libraries.

The County budget won’t receive final approval until it is voted on in September, but the Rio Arriba Independent Libraries have begun to brace for impact.

United Way Board Member Don Cobb, who served as Board liaison for the program, said the program has been successful in setting up children in rural areas for kindergarten, and he wants to see that cycle to continue.

“The issue is survivability, these libraries live on a shoestring budget,” he said.

The good part is that the training established an experienced base of educators who believe in the program, he said.

Fonseca said the pre-literacy program at Embudo is one of its oldest programs and she is dedicated to keeping it going.

“We’re good at making do and we’ll make do,” she said.