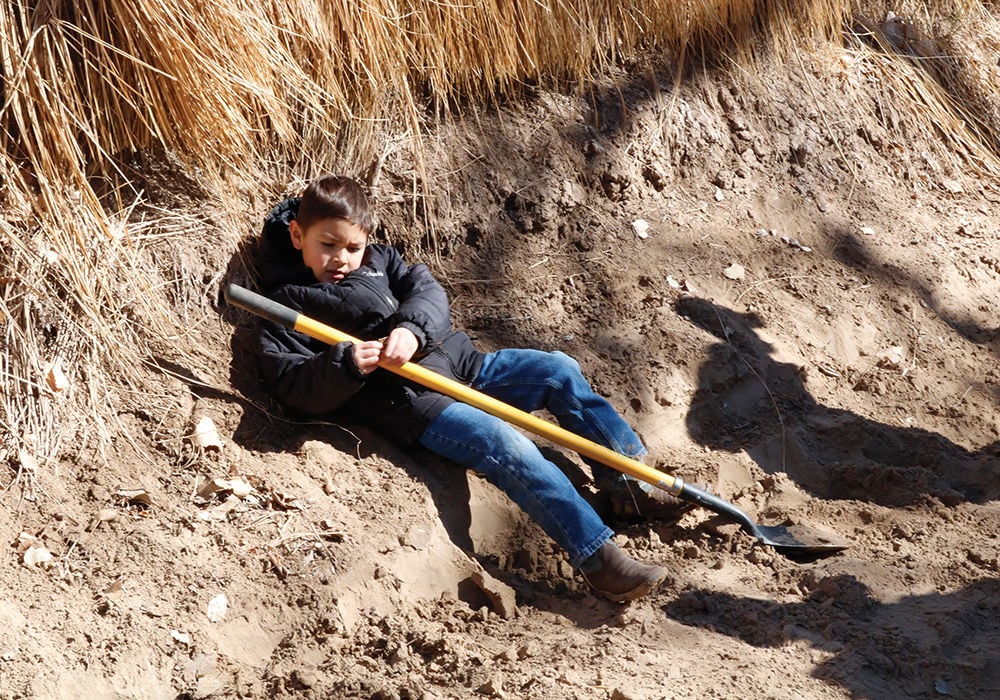 Xzavier Diaz takes a break during the annual clearing of the Acequia de Alcalde, March 5, which was also his sixth birthday. He and his father Erick Diaz came to Alcalde from their home in Rio Rancho to participate. Erick Diaz said he has been helping since he was his son’s age. 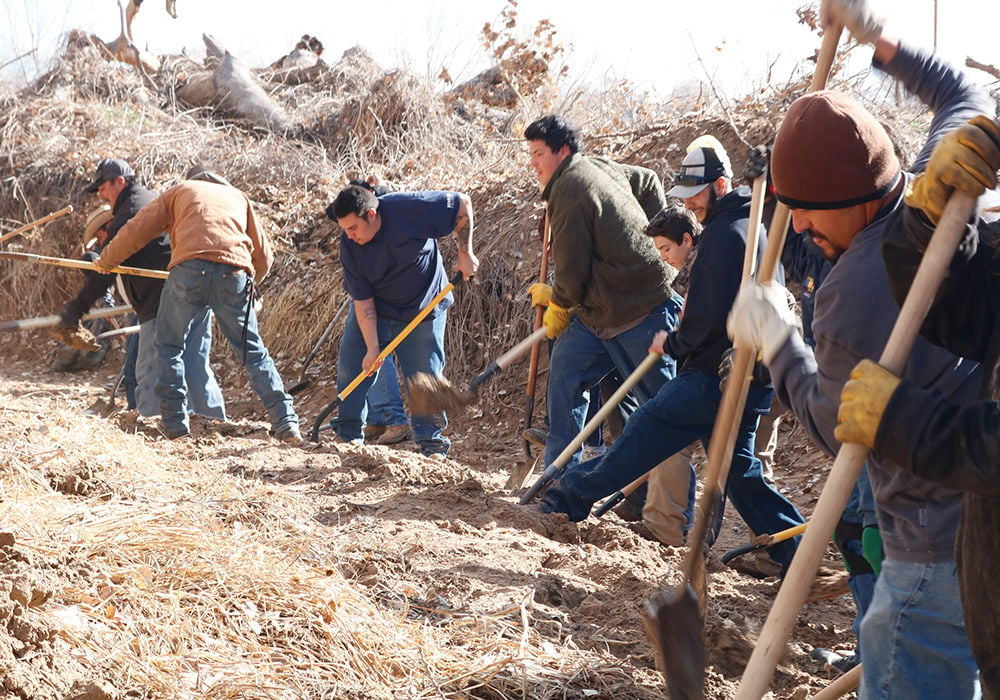 The majority of people who helped to clear the Acequia de Alcalde March 5 were men. New Mexico Acequia Association Executive Director Paula Garcia (not pictured) said she has noticed that in some places she has seen more women and high school-aged students attending.

Xzavier Diaz takes a break during the annual clearing of the Acequia de Alcalde, March 5, which was also his sixth birthday. He and his father Erick Diaz came to Alcalde from their home in Rio Rancho to participate. Erick Diaz said he has been helping since he was his son’s age.

The majority of people who helped to clear the Acequia de Alcalde March 5 were men. New Mexico Acequia Association Executive Director Paula Garcia (not pictured) said she has noticed that in some places she has seen more women and high school-aged students attending.

When Ron Espinoza, 72, was a child, the Acequia de Alcalde was his swimming hole.

His friend Junior had a gold coffee can and always carried matches, a small knife and salt with him. Together they would raid nearby chicken coops for eggs, build a small fire in the can and place the eggs inside to cook while they swam.

Espinoza smiled and leaned against his shovel as he told this story, taking a brief break from tossing weeds, dried leaves and other debris out of the Acequia and onto its banks. He pointed to the ground and said it was the spot where he used to swim.

About 100 people arrived, carrying shovels, rakes and gloves, in the cool morning hours March 9 to pile into the Acequia and clean it out in sections. Each parciante is expected to send at least one person to help. While some go out themselves, others send family members or hire a laborer to represent them.

For many people, this is the one time of year they run into neighbors, friends, cousins and other family members. While it is a long day’s work, requiring them to walk about six miles through sand, squat and walk underneath bridges less than four feet tall and get covered in dust, everyone smiles, jokes and chats in the moments in-between.

“It’s nice to come together, to be together, because even though you don’t get to see everyone all year long, it’s work but it turns out to be fun,” James Quintana, 50, said.

He has helped to clean the community ditch since he was at least 8 or 10 years old, he said.

“What I’ve noticed is that most acequias have some type of cleaning day and it is called sacando las acequias,” she said. “It really varies because over time, acequias have adapted to, in some cases, not having their own kind of flexibility they had in the past with a work crew for multiple days.”

Some mayordomos hire a backhoe operator and a crew to do the cleaning, she said. Others, such as those in Alcalde, clean the ditch together and then hire someone with a trackhoe to clear out areas filled with sand, rocks and difficult-to-remove debris.

Individual property owners are responsible for cleaning the tributaries off the acequia, from the diversion point to their own properties.

“It’s a dynamic, a custom, and it is evolving in different ways,” she said.

Those in Alcalde still abide by the tradition of the tarea — the practice of the mayordomo, or other community leader, assigning work to each person.

The group huddled around Alfredo Montoya, who read the names of property owners from a clipboard in alphabetical order. He marked each work section with a line in the sand. The parciante, or the person cleaning for them, then rushed over to clear their assigned area. This process happened every couple hundred yards and continued for the length of the ditch.

The more people, the smaller the tarea.

“We usually get 150 before lunch and after lunch we get about 75 cause a lot of people, they get their hours in that they have to and be done by noon,” he said.

Herrera has been mayordomo for seven years.

Every acre a person owns requires two hours of work, he said.

While more participants serves a practical purpose, it also helps strengthen and maintain relationships during drought.

“When you’re friends with your neighbors and you get along, you are a lot more likely to maintain that good relationship even when there is water scarcity,” Garcia said. “We are having more drought here and it is getting harder and harder to share scarce water and it feels like we are having to do without sometimes. If you have that base relationship with your neighbors, you are more likely to try and maintain a relationship even during times where there is less water.”

The Association hosted its first Acequia Drought Summit in 2018 and is planning to hold another one later this year.

Lucia Sanchez said Acequia de Alcalde’s practices were ahead of the time in many ways.

Prior to acequias being recognized as political subdivisions of the state, they developed bylaws, kept a bank account and assessed fees and penalties for pollution.

Sanchez said today, they try to come up with creative ways to keep costs down for parciantes and get people to pay their dues. They also try to educate people about property and water rights.

One issue is the way people use land, she said.

In the past, lands near the river were used for farming and raising cattle and sheep. Now, people put mobile homes in those same areas and do not use those water rights.

They want people to know that even though they may not be using the water now, they can go through the process of banking that water to use in the future. This helps to protect and maintain people’s rights.

This is especially important in areas where many groups have claims to water. In places like Northern New Mexico, the acequias, pueblos, cities and towns have to co-exist and manage this resource.

During last year’s drought, there was water flowing through the Rio Chama, but it had been diverted from the Colorado River through the San Juana Chama Project and was headed south to cities like Albuquerque, Garcia said.

“The acequias were in a real pinch because they were having to share and have really limited water resources,” she said.

While the adults have to worry about the day-to-day business of making sure the acequia is managed well and cleaned properly, they also want to make sure the tradition is passed down to the next generation.

Xzavier Diaz spent his sixth birthday cleaning the Acequia de Alcalde with his father Erick Diaz. They came from Rio Rancho to represent their family.

Diaz held a shovel that was nearly a foot taller than him. He dug holes, raked up piles of leaves and ran around with a smile on his face.