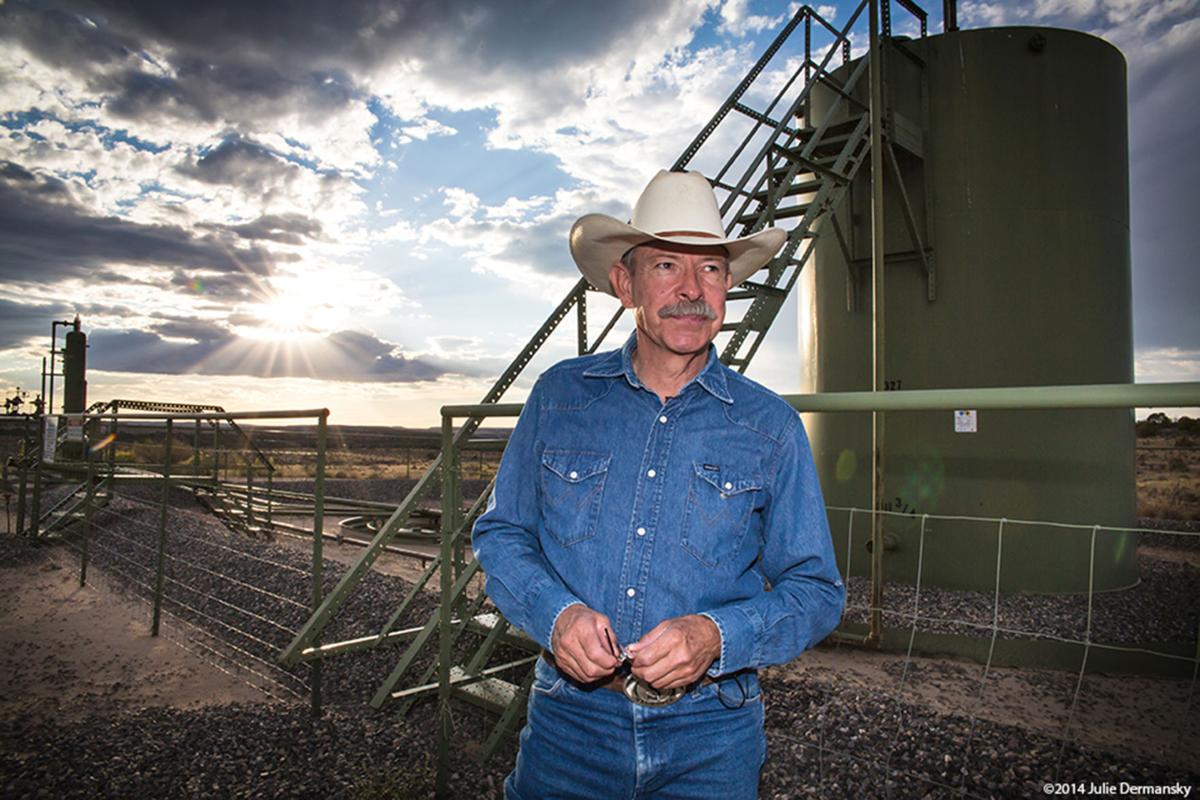 Don Schreiber stands in front of a well drilled into Bureau of Land Management land that he leases. “We have been dominated by oil and gas here at every level in our state for 90 years,” Schreiber said. “And unfortunately, we can’t turn that off as fast as the crash happened.” 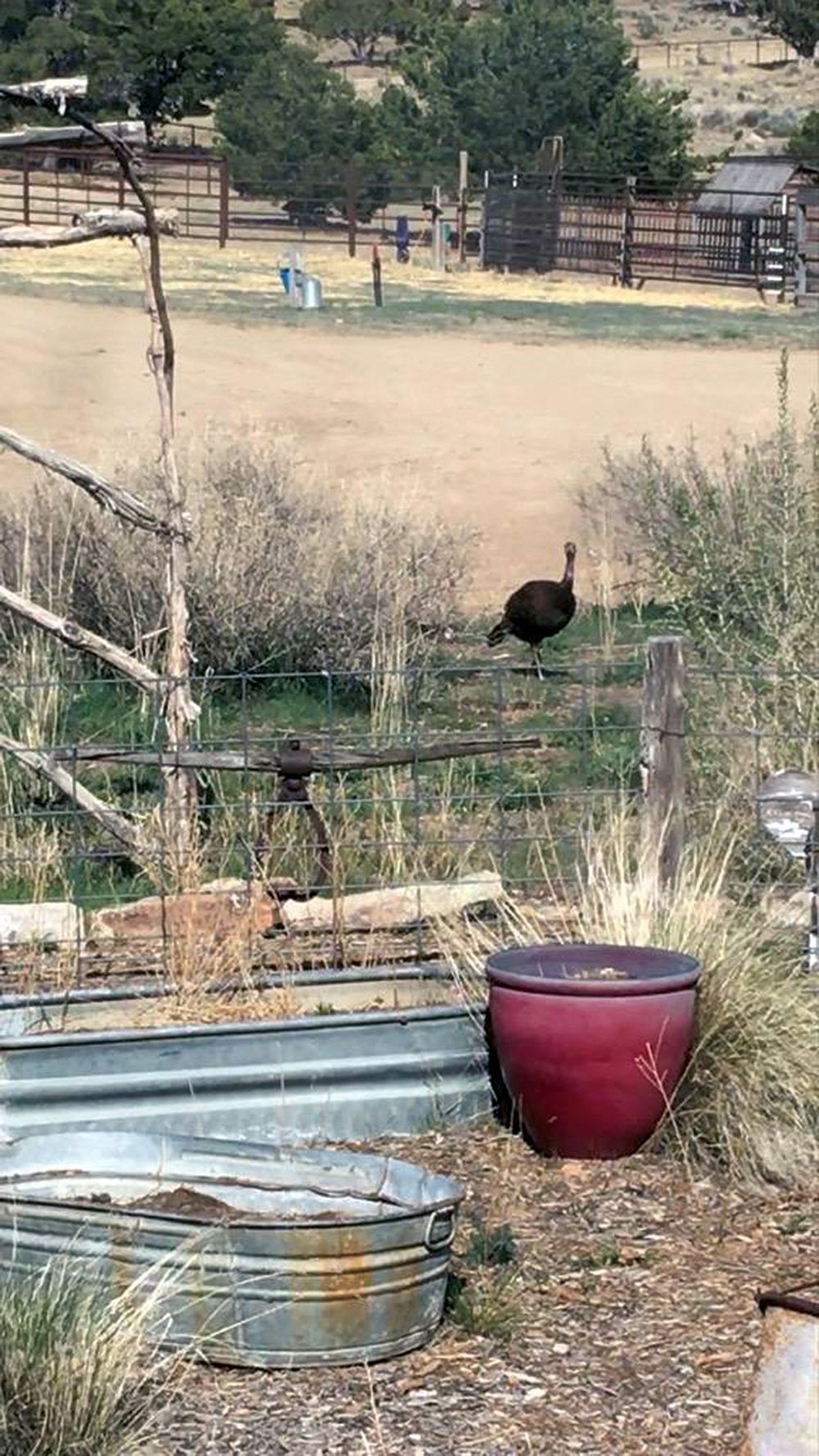 Don and Jane Schreiber saw a wild turkey in their yard for the first time in 20 years. They named her Henrietta.

For the first time in 20 years, on April 22, Don and Jane Schreiber saw a wild turkey in their front yard.

Since the rise of the oil and gas industry in the early 2000s in the San Juan Basin, where the Schreibers’ Devil’s Spring Ranch is located, they had not seen a wild turkey within a 20-mile radius of their property.

Operators in the San Juan Basin, which is primarily a natural gas field, packed up and left. They temporarily closed 672 gas wells, 46 oil wells and 135 wells producing oil and gas, according to an email from Susan Torres, public information officer for the New Mexico Energy, Minerals & Natural Resource Department.

With more than 20,000 wells in the San Juan Basin, these numbers might seem small. But energy companies have drastically reduced their workforce, so far fewer crews and equipment are out in the field, Don Schreiber said.

“The nuisance, the noise, the pollution, all of that was still very strong, even though the price (of gas) was down, still very intrusive and very much part of your daily life, until a month ago, when the virus hit,” he said. “That’s the most dramatic thing that’s happened to us on the ranch.”

In the late 1990s, the Schreibers dreamt of developing a sustainable agricultural operation and devoted their days to studying grass growth on their rangeland. They would estimate how much of the grass cows could eat by crawling along the plants with pairs of clippers until they filled bags the size of a cow’s stomach.

Their ranch was a prime site for drilling, though, and oil and gas operators who had mineral rights to the land soon descended. The Schreibers stood up from the grass.

They became fierce critics of the oil and gas industry, advocating for greater regulation and better environmental practice.

Twenty years later, even after natural gas prices declined, the couple were used to seeing dust clouds that trailed the heavy trucks around their property.

A scent that smelled like a mix between raw gasoline and paint thinner wafted up from leaks and vents in the wells, which release carcinogenic benzene, along with other chemicals.

The oil field traffic sounded like a “circus coming through your driveway,” Don Schreiber said, with all the horns and the rattling.

And the wells themselves, under pressure, could sound like anything from a balloon letting out air “to standing directly behind a jet engine on a runway when it’s taking off,” he said.

But suddenly, when the virus hit, there was quiet.

“The biggest thing that we’re hearing now is not hearing the well blowing and the compressor running and the oil field circus coming down the road,” he said. “The absence of that sound is truly remarkable.”

And gradually the air cleared.

From high points in their land they can look straight out to Colorado, to the shimmering La Plata Mountains.

Don Schreiber said the mountains look like they looked when he was a teenager in Farmington, before the first power plant went live.

The Schreibers have also heard and watched more song birds than they have in decades–and the wild turkey appeared.

“I wish I could just end the story right there,” Don Schreiber said. “Like, ‘Hey, the turkey came back! We turned the corner.’ But of course, that’s not the end of the story.”

There is currently no clear transition away from dependence on oil and gas money for state and local revenue.

“We have been dominated by oil and gas here at every level in our state for 90 years,” Schreiber said. “And unfortunately, we can’t turn that off as fast as the crash happened.”

But the big economic hit the state is bracing for, given its heavy reliance on oil and gas revenue that this year will not roll in, could lead to serious questions about more sustainable sources of revenue.

Don Schreiber said the state needs to seek out other industries that will protect the San Juan Basin and the communities around it.

“(Skilled and specialized workers) are here, they’re trained, they’re experienced,” he said. “We have idle manufacturing from small business owners, we have a giant climate problem, and we have an economy in New Mexico that we have to drag back up on the table now. Can we approach it as if we were going to make the best of all the resources and get the state back on an economic footing in a sustainable manner? I know the answer is ‘Yes.’”

The National Guard loaded potable water into tankers the morning of May 2 in Tierra Amarilla to provide Chama residents with safe drinking water.