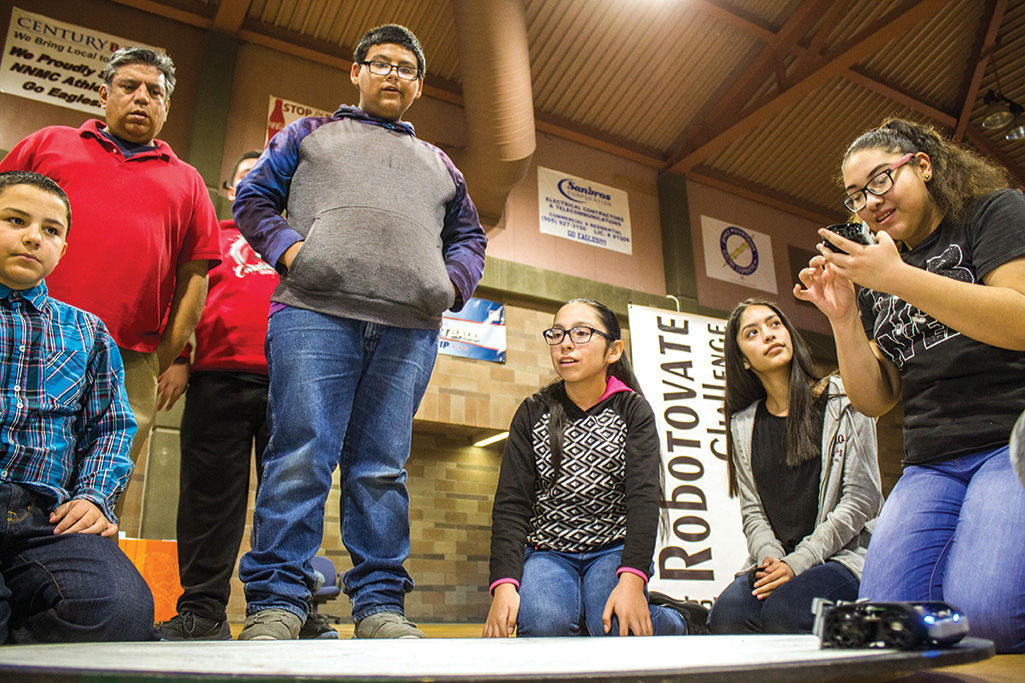 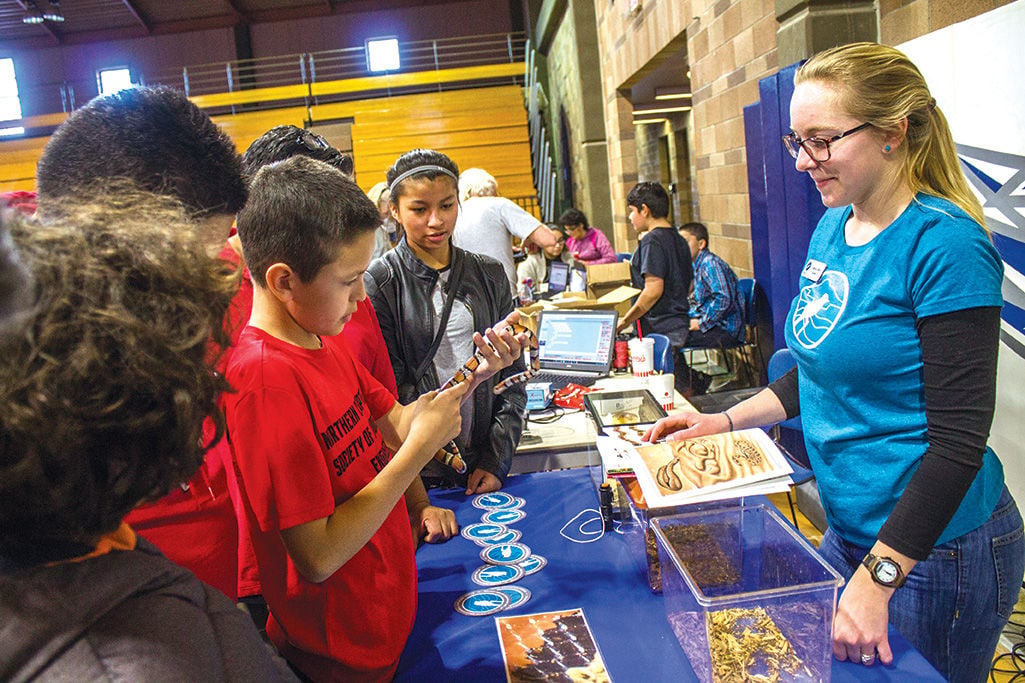 Huddled around a series of laptops arranged on two tables pushed together, 13 students from Española Middle School watched as fellow seventh-grader Marcos Johnson Cuevas adjusted a line of code that would change the behavior of the robot they had been working on since the beginning of the semester.

Seventh-grader Mikella Vigil enthusiastically demonstrated how to use a soldering iron, which the team needed to complete a circuit and get the robot running.

The students, who are members of Emmanuel Espinoza’s and Mary June Abergos’s technology and robotics classes at the middle school, updated and tested their robot, March 3, at the RoboRave and Northern New Mexico Science Showdown, in the Eagle Gymnasium on the Northern New Mexico College campus.

Each Friday, since the beginning of January, Matthew Williams, a scientist at Los Alamos National Laboratory and former member of the Los Alamos Public Schools Board of Education, came to Espinoza’s and Abergos’s classes to help them design and build their robot.

The Showdown attracted students from across the state, who spent an entire day programming and testing robots that could transport cargo, precisely place objects, track objects based on their color, or fight in sumo-style matches.

The teams came to the Showdown in preparation for the RoboRave International, in May, in Albuquerque, where those who place, win cash prizes.

The seventh- and eighth-graders from Española Middle School built a sumo robot named after the Disney character WALL-E.

Seventh-grader Krystian Montoya, 13, said she’s interested in the way robots are made. Vigil said the process is fun, because even though the projects are focused on science, there is still room for creativity.

“You get to put your own twist in the building,” Vigil said. “And you mess up a lot.”

Seventh-grade Pojoaque Middle School student Ethan Blea, 13, of Española, said the robots use sensors to see and attack the other robot, and to stay within the circular ring where they fight.

Teresa Lopez, who teaches computers at Española Valley High School, said the Showdown motivates students to discover and learn more from their environment.

Lopez’s face lit up with a bright smile as Maritza Gonzalez, 8, a third-grader at Piñon Elementary in Santa Fe, successfully used the claw on a four-wheeled robot to drop an object into a target — something that challenges even high school students.

“It’s hard to move it, but you get the hang of it once you’re doing it,” Gonzalez, whose favorite subject is math, said. She came to the Showdown with her sister Maylin Gonzalez, 10, a fifth-grader who was competing on a four-student team representing Piñon, with their teacher, Delara Sharma.

Espinoza said of the 24 students in his middle school classes, nine of them attended the Showdown.

“Robotics class is more technology-based and hands-on,” he said. “With these competitions, we spend time trying to build and create, and then go compete, which is really exciting for them.”

Vigil, 13; Shayna Gomez, 13; and Hailey Archuleta, 13, won a sumo bot competition on the afternoon of the event.

Gomez said the robot’s design is good, and it’s not likely the team will need to change it before the contest in Albuquerque.

“We just fought a much better robot, and we just won,” Gomez said.