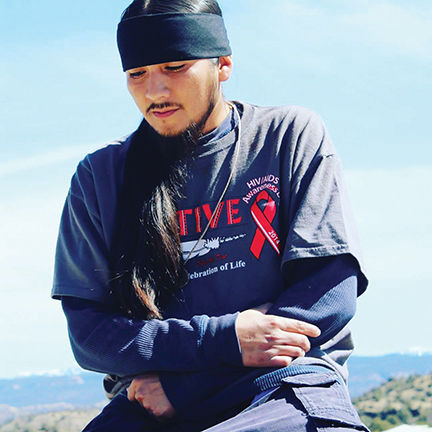 “It is hard now because I know everybody is still learning how to deal with living without him,” Heaven Howland said about her brother Travis Howland. Travis was allegedly killed by Allister Quintana in early February 2018 in Dulce. 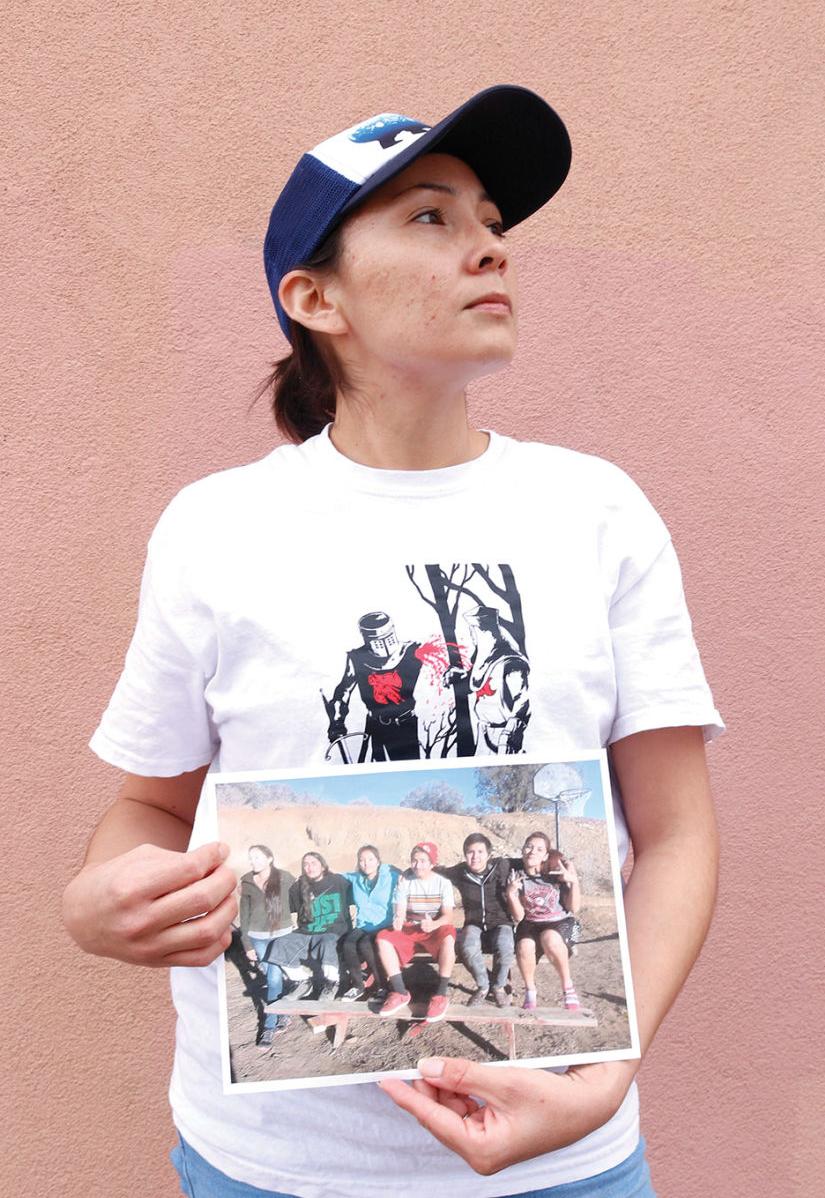 Heaven Howland is Travis Howland’s older sister. Travis was murdered in February 2018 in a home in the Jicarilla Apache Nation. She holds a photograph of some of her siblings. Travis is second from the left.

“It is hard now because I know everybody is still learning how to deal with living without him,” Heaven Howland said about her brother Travis Howland. Travis was allegedly killed by Allister Quintana in early February 2018 in Dulce.

Heaven Howland is Travis Howland’s older sister. Travis was murdered in February 2018 in a home in the Jicarilla Apache Nation. She holds a photograph of some of her siblings. Travis is second from the left.

When Harley Howland had her baby last June, she named her in honor of her brother, Travis Howland.

Travis was murdered last February at a house on Navajo Street in Dulce in the Jicarilla Apache Nation. He was a guitar player, a graffiti artist, someone who loved metal music and a father.

While looking through Travis’ things after he died, Harley found a piece of artwork with the word saage, written with two As in bold graffiti letters. Although she wanted to withdraw from her friends and family in the last months of her pregnancy, they all had to focus their energy on getting justice for Travis.

That is how Harley decided upon a name for her daughter: Saage Justice.

Three of Travis’ sisters, Heaven, Harley and Lauren Howland, want people to remember their brother for who he was and not only by how he died.

“I just miss hanging out with him, just daily life,” Heaven said. “Daily life was fun with him. He made everything more interesting. He was a character. There is never going to be another one like him, ever. There’s not.”

Heaven said Travis was a goofy person who liked to crack jokes, despite a difficult childhood and adult life.

She and Travis, along with their siblings, were in and out of foster care growing up and they all eventually ended up with their adopted mother in Dulce.

Alcohol and drugs were prevalent in the home from a young age, Heaven said.

“It wasn’t bad, but it wasn’t good either,” she said. “It was more like grooming, where we were groomed to be wild, you know, ‘Drinking on weekends is fine. You can start on Thursday.’ You know, ‘Oh you guys can smoke weed if you want to.’”

As he grew up, his drinking and drug use continued, but he was planning to go into treatment at the time of his death.

“I just want people to know he was a human being,” Heaven said. “He was a person that had his struggles, but in no way he deserved anything like that.”

Allister Quintana has been charged with first-degree murder, kidnapping resulting in death and conspiracy to commit kidnapping for allegedly torturing and killing Travis Howland at the beginning of February 2018. Travis’ body was discovered more than a week later on Feb. 14, 2018.

A second person was charged in the case on Oct. 22, 2018, about eight months after Travis’ death.

Andrew Bettelyoun was charged with murder, conspiracy to murder and kidnapping. He entered into a plea deal Jan. 30 and pleaded guilty to kidnapping.

Bettelyoun is the nephew of the Nation’s Juvenile Officer Letita Julian, who is married to Nation Criminal Investigator Aaron Julian.

Quintana and Bettelyoun are cousins of the Howlands and Heaven said they grew up referring to each other as brothers and sisters.

This has made it even more difficult for his family to heal.

“That’s why it is so hard you know and people think that I hate him and I’m like, I hate what he did,” Heaven said about Quintana. “What he did, it is so confusing to me because of the way I show love to all my brothers and sisters. It is so confusing to me because I still love him. I should hate him. I should just want him to die the same way, but I worry about him.”

Instead of placing blame directly on the people involved, Heaven said a lot of what happened is because the Nation fails to provide services for people in the community.

It is difficult to access drug and alcohol treatment and get help, she said.

She experienced that when she attempted to get into alcohol treatment about two years ago.

She visited the behavioral health center, but was told there was a six-month period before she could get into treatment, she said.

While her brother had been in and out jail for years, he was only given the option to enter detox once.

Heaven has now been sober for about one year.

Lauren said that while she was able to access resources to help her with her own sobriety, Quintana, Bettelyoun and her brother did not have the same chance.

“They didn’t have those resources given to them in the same period of time, and if they had been, this could of all been prevented, too if they had had these resources also,” she said.

Harley is an EMT. She said about 95 percent of the calls she goes to on a daily basis are related to drug and alcohol use.

Quintana was originally charged with murder, according to a May 24, 2018 criminal complaint filed in federal court. He was indicted on additional charges this month, which include kidnapping and conspiracy to commit kidnapping.

According to the criminal complaints for Quintana and Bettelyoun, on Feb. 14, 2018, Jicarilla Apache Police Department officers discovered Travis bound with a cord inside a closet without his clothes on. There was dried blood throughout the residence.

The FBI’s Evidence Response Team executed a warrant on the residence and found broken broom sticks wrapped in black material and silver duct tape covered in dried blood inside the home.

Bettelyoun admitted in an interview with law enforcement that he had been drinking alcohol with Quintana and Travis, according to court records. He passed out and awoke to Quintana arguing with Travis and punching him in the face.

“Bettelyoun admitted to acquiring electrical cord from a nearby room and assisting Quintana in binding (Travis’) hands and feet,” the complaint states.

Heaven said that her brother loved his hair, but it was cut off sometime during the alleged attack.

Quintana was originally arrested by the Nation Police Department on Feb. 8 for a separate tribal charge, court records state.

An unnamed Native American male who was incarcerated with Quintana said on April 26, 2018 that he had three conversations with him while in jail.

“Quintana made the comment that he needed to get something out of his house before it started to stink and that if he did not get it out before it began to stink then it would result in a manslaughter charge,” the complaint states.

FBI investigators also spoke with another person incarcerated with Quintana at the Jicarilla Apache Detention Center. The complaint states that Quintana told the prisoner that he and Bettelyoun tortured and killed someone.

Despite this, each of the sisters has proven to be strong and wants to contribute to their community to make the Nation a better place.

Heaven is involved with the parents association at Dulce Elementary and writes the parents newsletter. She is helping to bring in guest speakers like Jicarilla doctors and lawyers to speak to children and their parents.

She also wants to start a boarding house where people can learn the Jicarilla language and learn to cook and live together.

Lauren went to school to become an electrician and installs solar panel systems. She hopes to start installing solar systems on people’s homes within the Nation.

Harley continues to work as an EMT, helping people throughout Dulce and the surrounding areas.

While Heaven said she may be judged within her community for sharing Travis and her family’s story, it is worth it so people can learn about her brother and what they have all gone through.

“I am going to get a lot of dirty looks and stuff, but I don’t care,” she said. “Something has to change in that community. We need out. I believe it can change and I believe wholeheartedly that it can be amazing.”

Enjoy reading the SUN online? Then you'll love the print version. This is just one of the 28 local news, opinion, arts and sports stories published in the Feb. 28, 2019 edition. To see the rest, buy a copy from one of our vendors on the street or at one of these locations.