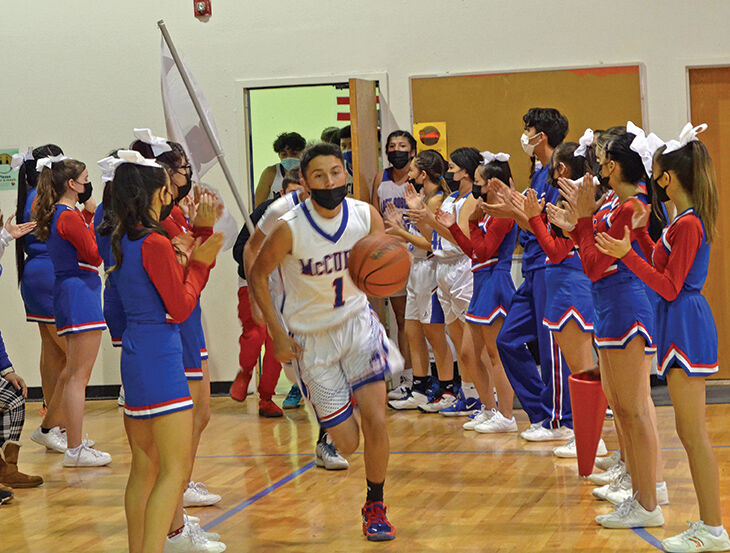 McCurdy Charter School senior Marcos Gasca (1) leads the Bobcats basketball team out of the locker room between the cheer team and the girls basketball team before their first game against Cimarron Nov. 20. Gasca was also the school's quarterback during football season, and will be a big contributor for basketball. 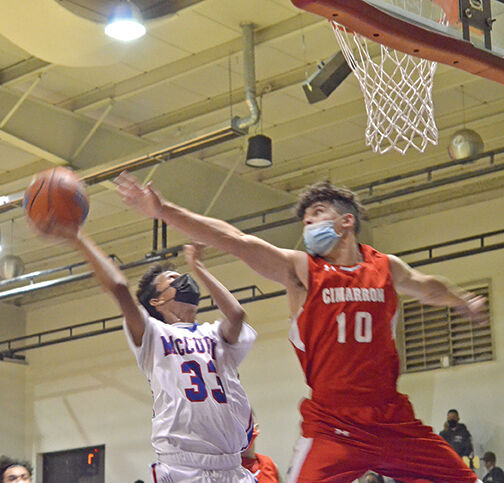 McCurdy Charter School senior Kordero Talachy (33) attempts a layup over a defender. Talachy is one of just two seniors on the team this year, and returns after not playing basketball during the 2020-21 season.

McCurdy Charter School senior Marcos Gasca (1) leads the Bobcats basketball team out of the locker room between the cheer team and the girls basketball team before their first game against Cimarron Nov. 20. Gasca was also the school's quarterback during football season, and will be a big contributor for basketball.

McCurdy Charter School senior Kordero Talachy (33) attempts a layup over a defender. Talachy is one of just two seniors on the team this year, and returns after not playing basketball during the 2020-21 season.

The McCurdy Bobcats were down eight points at halftime in their first game. Soon in the third quarter, they were down 11.

But as they clawed back, they found themselves down six in a timeout halfway through the quarter.

“We got challenged by coach,” said senior guard and team captain Marcos Gasca. “He said, ‘You guys are down six, I want you guys to be at least down four.’”

But by the end of the quarter, instead of down four, they were up four points. In all, it was a 13-0 run for McCurdy to retake the lead, and a 22-10 third-quarter margin that made the difference in their 53-46 win over Cimarron to open the season.

“It’s a good feeling to be back in front of all the fans,” said coach Ernesto Espinoza.

McCurdy won the tip, and junior Jolen Montoya got the first points of the game as McCurdy built an early lead. But the Rams came back, and took the lead at the end of the first quarter 15-13.

Gasca sat at the beginning of the game, with the team exercising caution as he returns from a shoulder injury suffered during football season. But he soon found himself playing a lot of minutes, and after the game said it felt back to 100 percent.

In the second quarter, though, the Bobcats went ice cold. Seemingly, every shot fell short or long; McCurdy hit just one field goal in the quarter — a three-pointer by Ryan Montoya. The team missed eight of their 11 free throws in the quarter. On the other end, sloppy fouls gave the Rams easy points, and they took a 27-19 lead into halftime.

McCurdy also had contributions from senior Kordero Talachy, who did not play basketball last year but returned for his senior season.

“It’s a feeling you can’t beat,” Talachy said. “Running out of the locker room, and the whole gym going wild. That’s a one-of-a-kind feeling.”

Talachy said they were overthinking during the first half, and calmed down into the third quarter.

The third quarter swung back McCurdy’s way, and they showed their strengths on both ends as they retook the lead. And in the fourth quarter, the Bobcats were able to close out the game from the free-throw line. Gasca punctuated the quarter with a beautiful no-look assist right as Cimarron came back within a point. And though the Rams were within one possession for much of the quarter, by the end McCurdy led by seven points.

“I was proud of them,” Espinoza said. “I just asked them to keep working. And they did. They fought all the way through to close the game out.”

Montoya led the Bobcats with 14 points, all in the second half. In the fourth quarter alone, he attempted 10 free throws, and made eight of them. Montoya, a freshman, started and scored 11, including McCurdy’s only three-point makes. And Gasca scored eight points off the bench.

The Rams junior varsity team got the better of the Bobcats 52-45 before the varsity game.

After the win to start 1-0, McCurdy took on Academy for Technology and the Classics on Tuesday after press deadline. Despite a few weak years for ATC, they are always a strong rival for McCurdy.

“They’re a big rival for us,” Gasca said. “They have us circled in the calendar every year. They want to beat us. I’m not looking at trying to lose to them.”

After a Thanksgiving break, the Bobcats will return for the West Las Vegas tournament Dec. 2 to Dec. 4.