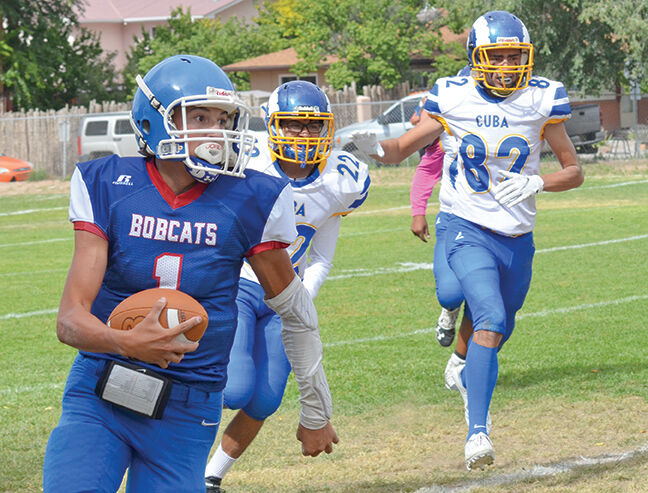 McCurdy Charter School senior Marcos Gasca (1) breaks through on a first-quarter fun. Gasca went down with a shoulder or neck injury early in the game and did not return, leaving his freshman replacement to command the offense. Gasca's absence was also felt on defense as the team's starting free safety, with Cuba able to exploit the weakness in the secondary. 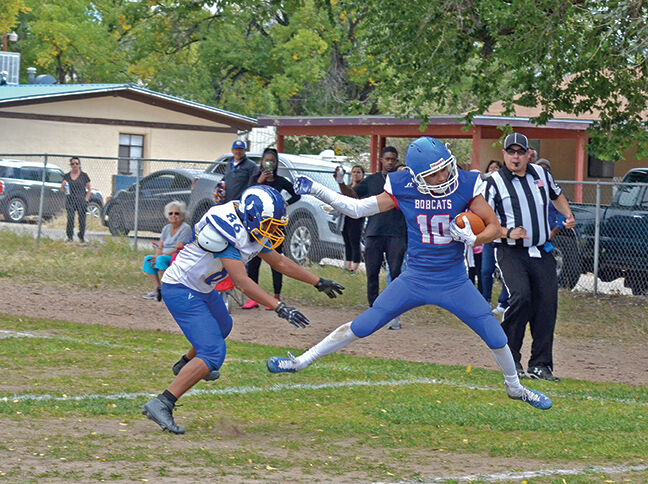 McCurdy Charter School's Joey Fernandez (10) bounces off of a defender's tackle attempt on a run to the 1-yard line. Fernandez was one of seven Bobcats with a rushing attempt.

McCurdy Charter School senior Marcos Gasca (1) breaks through on a first-quarter fun. Gasca went down with a shoulder or neck injury early in the game and did not return, leaving his freshman replacement to command the offense. Gasca's absence was also felt on defense as the team's starting free safety, with Cuba able to exploit the weakness in the secondary.

McCurdy Charter School's Joey Fernandez (10) bounces off of a defender's tackle attempt on a run to the 1-yard line. Fernandez was one of seven Bobcats with a rushing attempt.

At some point in the fourth quarter, after falling behind at home, McCurdy Charter School football coach Robert Nevarez turned to me on the sideline, and caught my eye.

“Well, you’ve just watched us completely run out of gas,” he said.

That just about sums up what happened in the game, a non-district loss to Cuba (3-3) where McCurdy (2-5) went from leading by 18 in the second quarter to allowing 37 unanswered points to lose 45-26

It seemed like, despite the early score margin, once the Rams landed a punch, the Bobcats lacked the ability to hit back while they stumbled into the ropes through the second half.

Nevarez said that the team’s smaller roster - in addition to losing multiple starting linemen to flu and COVID-19, and then injuries through the game, cost them as the game progressed. They play multiple eighth graders, and have almost all starters playing both offense and defense. As injuries pile up, those starters cannot even get off the field for a play sometimes. And both their starting quarterback and running back, who also play key roles on defense, left due to injuries.

“We played tough in the first half, like we’ve done all year,” Nevarez said after the game. “And then we just run out of people.”

Through the first quarter, McCurdy looked like the far stronger (and more physical) team. They were, quite simply, bullies at the line of scrimmage. Cuba’s first two drives went straight backward. First, with a interception when the quarterback was fading far too deep and it fell into the hands of a defensive lineman. Then they went three yards backward again and punted from their own 10-yard line.

The Bobcats, meanwhile, seemingly had no problem moving the ball. But their first two drives both ended with a fumble in Cuba territory. And on the second, quarterback Marcos Gasca came up injured holding his shoulder (Nevarez said he believes it to be a pinched nerve in his neck) and did not return to the game. Freshman Jeremaya Roybal took over under center for the rest of the game.

“Jeremaya did a great job,” Nevarez said. “He is not as quick as Gasca, but he can definitely throw. And our passing game was there. He is the quarterback of the future. Gasca’s a senior, he’ll be gone next year. Jeremaya will step in, and we’re going to build around him. I think he’s a great quarterback, and he’s got a lot of talent.”

On their third drive, McCurdy finally held on to the ball, and at that point it was all they needed to get into the end zone, with Lucas Martinez punching in a one-yard run.

“I knew we could move the ball,” Nevarez said. “We scored a lot of points up front. We made some mistakes, and even with those mistakes we were still winning.”

McCurdy fumbled again on their next drive, and these fumbles would come to hurt them later on (in total, they would lose five in the game). A bigger first-half lead would have been easier to keep, of course, and may even have discouraged the Rams before they could start their comeback effort.

McCurdy did score once more at the start of the second quarter after forcing a turnover on downs, traversing 48 yards in six plays capped in a one-yard run from Casey Nevarez.

But Cuba finally found the holes in McCurdy’s defense later into the second quarter, and their drive was extended by a fourth-down offsides before a touchdown pass. With Gasca out as the starting safety, the back end of the Bobcat defense had a weakness the Rams would look to exploit.

Robert Nevarez said there was nothing special in Cuba’s schemes, they simply found the weaknesses in the defenses, and McCurdy ran out of players to stop them.

“We didn’t have the personnel to make the adjustments we wanted to make,” he said.

But McCurdy’s next drive went according to plan after a strong kickoff return, and it took just three runs from the different players to score, with Martinez taking his second touchdown for an 18-8 lead after all three extra point conversions failed.

The defense made a stop, and Roybal hit Dylan Dean on a long pass on his first attempt of the game. Then, Jolen Montoya ran in a 25-yard touchdown, and suddenly it was an 18-point lead and the rout looked to be on. But that did not last long; a long kickoff return gave Cuba great field position, and they scored in two plays at the end of the half.

After halftime, Cuba threw two long passes and scored on a run the next play, and quite suddenly the lead was down to two. McCurdy fumbled on the next drive, then just as quickly let up another touchdown to fall behind.

After their third straight touchdown, Cuba attempted a fake extra point. That one failed, but later in the game they would attempt a true extra point for the first time in the game, and succeeded. Robert Nevarez would tell the team during a timeout that these decisions showed a lack of respect that they would have to earn back.

Overall, McCurdy lost five fumbles in the game en route to a 19-point loss. After that initial 26-8 lead, Cuba scored 37 unanswered points on five straight touchdowns, scoring on every drive from that point onward excluding the last-minute kneeldown.

“When you have five turnovers, you can’t hope to win the game,” Robert Nevarez said. “In the first half, we left three touchdowns on the ground. We should’ve gone into that locker room leading four touchdowns.”

Martinez was the leading rusher on the day with 57 yards after Casey Nevarez left in the second half with a concussion. Seven different Bobcats had rushing attempts, combining for 218 yards on 37 carries. Cuba’s offense in total barely outgained McCurdy’s (300 yards to 262) - but the turnovers were deadly, and McCurdy gained just 45 yards total in the second half, compared to nearly 200 for Cuba.

The loss drops McCurdy to 2-5 on the season. Their only wins on the year have come against Questa (one in a forfeit win), but games against Santa Fe Indian School (where they similarly went up 14-0 in the first quarter before falling behind) and now Cuba could have been wins, and could have changed that to a 4-3 record.

Remaining 1-1 in district play, McCurdy sits squarely in third place in the district.

“It doesn’t show it, and I know a lot of people say, ‘That’s same old McCurdy football,’” Robert Nevarez said. “But it really isn’t. We’re coming out, and we’re competing to the very end. And I have coaches telling me that we’re playing better than what they expected.”

Nevarez is excited about the team’s youth, which only loses Gasca as the lone senior on offense and has more freshmen and sophomores than juniors and seniors this year.

“What these guys have learned about football, nobody will believe this, but our first practices, we were teaching guys what the 1-hole is, versus what the 3-hole is,” he said. “We were teaching the very basics of football, how to tackle, how to block, how to run a route.”

Next week, the Bobcats will face Escalante (4-3) in a district matchup, a team they have not beaten in seven tries - the last six matchups (though none since 2018) have had an average score of 56-2.