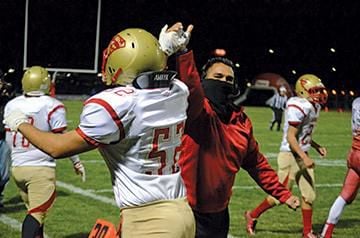 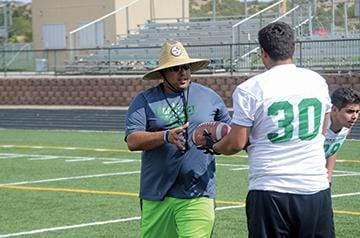 After a 6-13, two-year stint as head football coach at McCurdy Charter School, he was fired unceremoniously — by email.

“I remember, last year (2015) in March, I had just came from a coaching clinic in Dallas last year,” he said. “As I’m driving back, I got an email saying I was let go as head coach.”

Oropeza was surprised, as he said McCurdy paid him to attend the clinic in Dallas, Texas.

The El Paso, Texas native and Montwood High School and University of Texas-El Paso graduate was fired from his first head coaching job, after he worked his way up into a defensive coordinator position down south.

After earning the defensive coordinator position at Santa Teresa in 2012, he departed to replace former McCurdy football coach Eric Vigil in 2013.

“I think that was the problem, we had young guys,” Oropeza said. “Its hard to compete with juniors and seniors when two of my offensive linemen are eighth graders, one freshman.”

His firing prompted him to spend more time with his family and get more involved with his church last spring, before former Española Valley High School Sundevils coach Miguel Medina gave him a phone call, not knowing he had been fired.

“When I first got to McCurdy, I was like, I’m so young, I’m already a head coach, I feel good about myself,” Oropeza said. “When that school and that coach were the first ones to call me, it was really humbling.”

He helped Medina and a 16-player senior class lead Española to its best football season in school history, earning a 9-2 record, winning their District and hosting a first round State Tournament game.

“We had that amazing season, it’s all credit to the players,” Oropeza said. “It was great being at Española the past year, I learned a lot.”

Excited for the 2016 season, Oropeza called current McCurdy coach Ron Gallegos in an attempt to organize a flag football league, when he heard about the head football coach opening at Pojoaque in December and applied.

He almost faced a setback in applying when his interview was scheduled for Dec. 28, 2015, in the middle of a vacation planned with his family.

“We changed everything around so we could fit the schedule,” he said, acknowledging the sacrifice his wife made in changing their plans. “They gave me the job, I was really blessed.”

Oropeza has already made a difference at Pojoaque, increasing the amount of athletes attending summer workouts.

“He’s been here every day since we hired him,” Pojoaque Athletic Director Matt Martinez said. “You get kids enjoying the program more, getting a lot more benefit from it.”

Oropeza is hoping for success on the field in his first year at Pojoaque, but won’t be disappointed if it doesn’t happen right away.