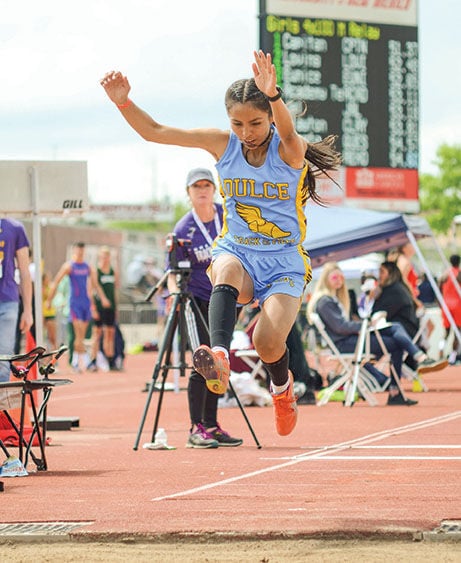 Lady Hawk Tunte Vigil takes a long jump during the District 3a state track meet in 2019. 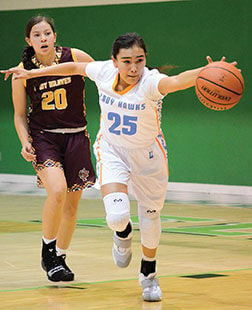 Lady Hawk Brooke Vigil competes in a 2019 game at home. 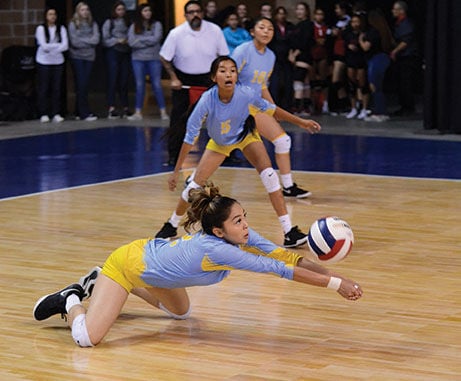 Dulce's Tionne Lovato goes for a dig in the Lady Hawk's game against Eunice in first round state tournament play in 2019.

Lady Hawk Tunte Vigil takes a long jump during the District 3a state track meet in 2019.

Lady Hawk Brooke Vigil competes in a 2019 game at home.

Dulce's Tionne Lovato goes for a dig in the Lady Hawk's game against Eunice in first round state tournament play in 2019.

The Dulce Hawks will be back this spring after a year away from sports, returning teams such as the storied volleyball program.

Unlike other schools around Rio Arriba County, Dulce never had a sports season in the 2021 spring.

The Jicarilla Apache Nation Legislative Council, in coordination with the school, decided for the safety of the community that Dulce schools would remain online through the school year, and they would not participate in sports, even while other schools started athletic seasons in March or April while the school sessions remained remote.

But the Hawks are looking to get back into sports this fall and return fall sports to Jicarilla Apache Nation.

“We are looking forward to reopening,” said Athletic Director Vicky Abreu, who was also an interim superintendent and high school principal.

Abreu took over as the athletic director last year, and it was a busy year though no sports were played at the high school.

This year, Abreu said, the Council and the School District came together for an agreement to participate in sports while following mask guidelines and disinfecting, as well as other public health safety procedures.

Abreu stressed that the decisions both this year and last year were made collaboratively between the Council and the school District.

Abreu said none of the Dulce students transferred or played sports at any other school districts, though she specified that they could have if they wanted to and the District would not have prevented that, members of the community wanted to follow the guidelines set by the council.

The district is finalizing schedules for football, volleyball and cross country in the fall, she said. Some sports are under way for summer fitness programs, though they are being careful to avoid injuries after being away from sports for so long. And the school is looking forward to begin sports in August.

While some coaches remain in place, including Kathleen Salazar-Valdez for volleyball and Brad Muniz for football, others will be new faces. Terry Olguin was hired to be the girls basketball coach; he has previously coached at Coronado and Questa and in 2002 was the state runner-up at Magdalena. The boys basketball coaching position, meanwhile, remains open.

But Abreu said she is excited for all of the sports. She laughed, and said that football was always her favorite sport to watch, she coached volleyball, and ran track.

“I’m hoping all of our teams will make it to state,” she said. “We have a good group of kids ready to step it up this year, and they are excited about coming back.”