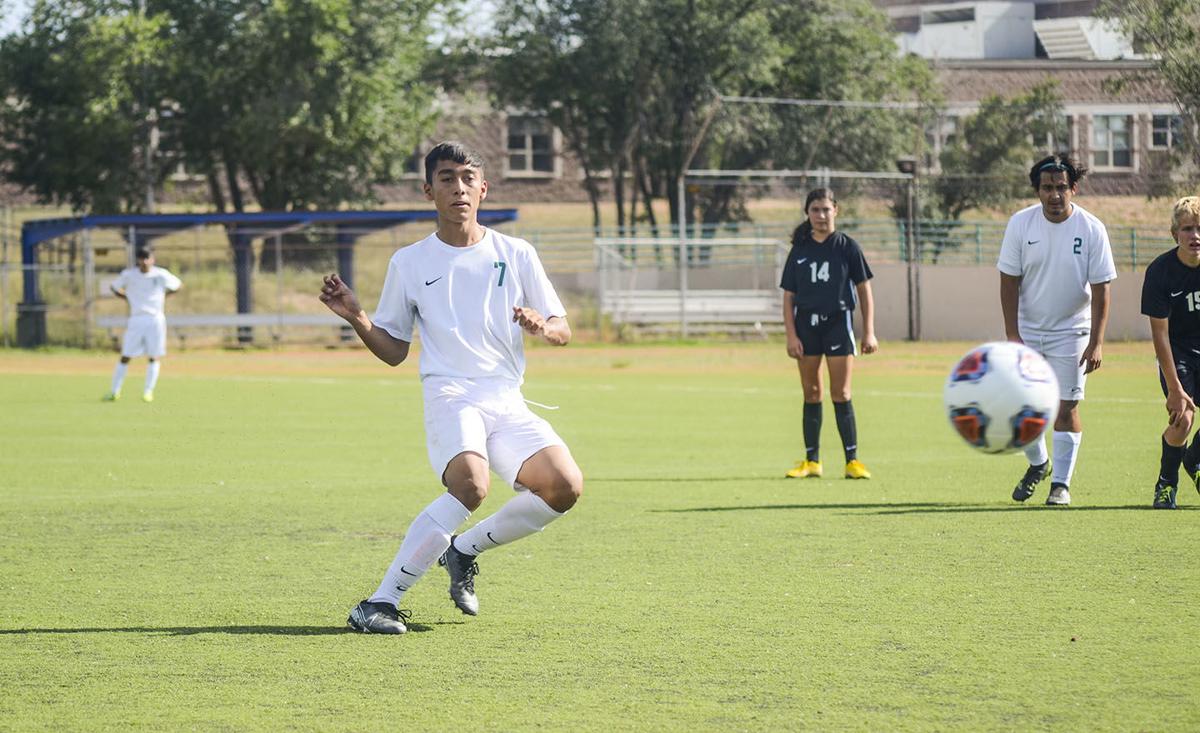 Pojoaque Valley sophomore Christian Holguin scores on a penalty kick in the first half of the Elks’ 6-2 win over Desert Academy/Santa Fe Waldorf on Sept. 4 at Alto Park in Santa Fe. Holguin led Pojoaque with four goals and two assists in the Elks' second win of the season. 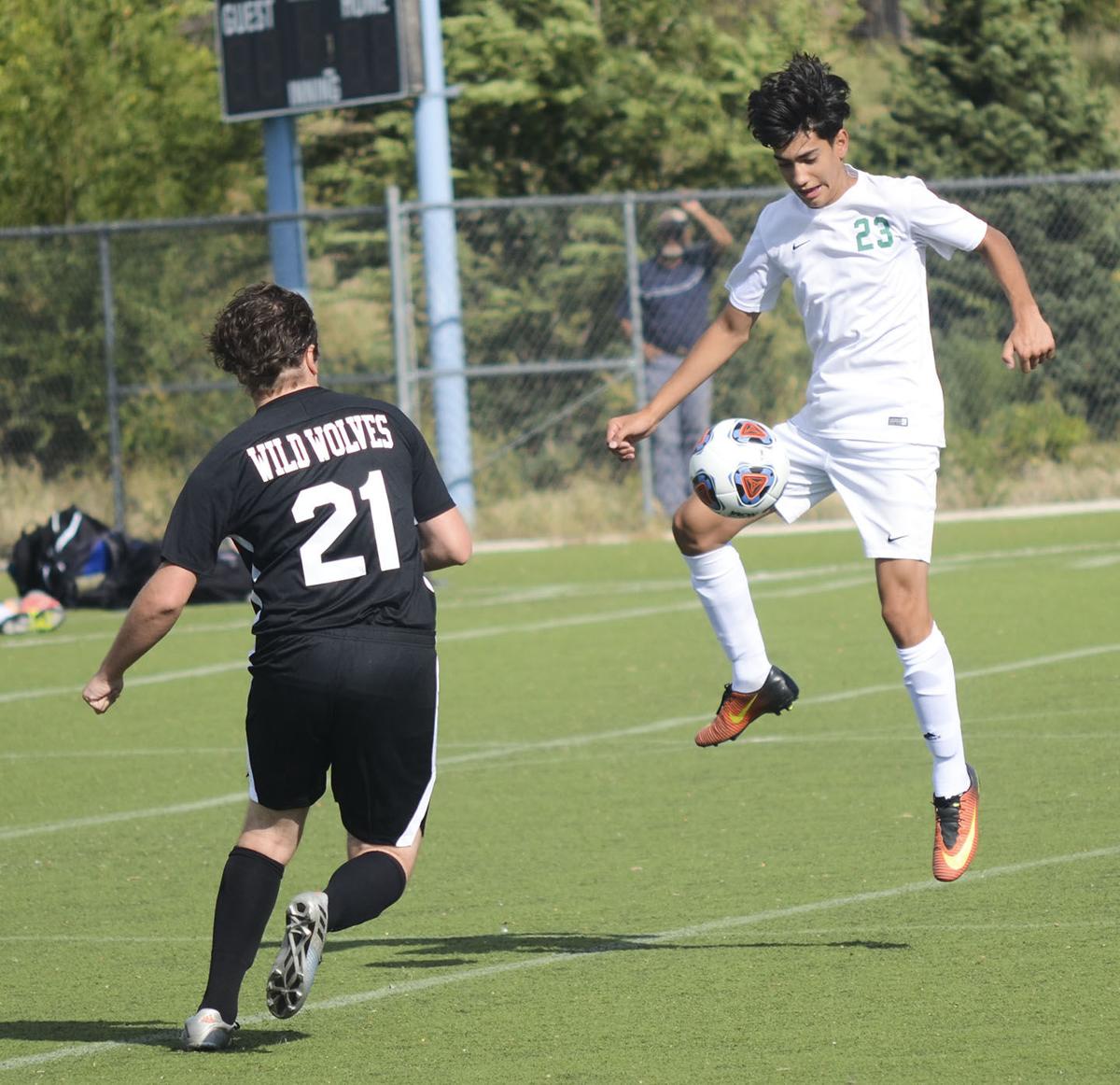 Pojoaque Valley freshman Kevin Valencia looks to gain possession of the ball during the Elks’ 6-2 win over /Desert Academy/Santa Fe Waldorf on Sept. 4 at Alto Park in Santa Fe. 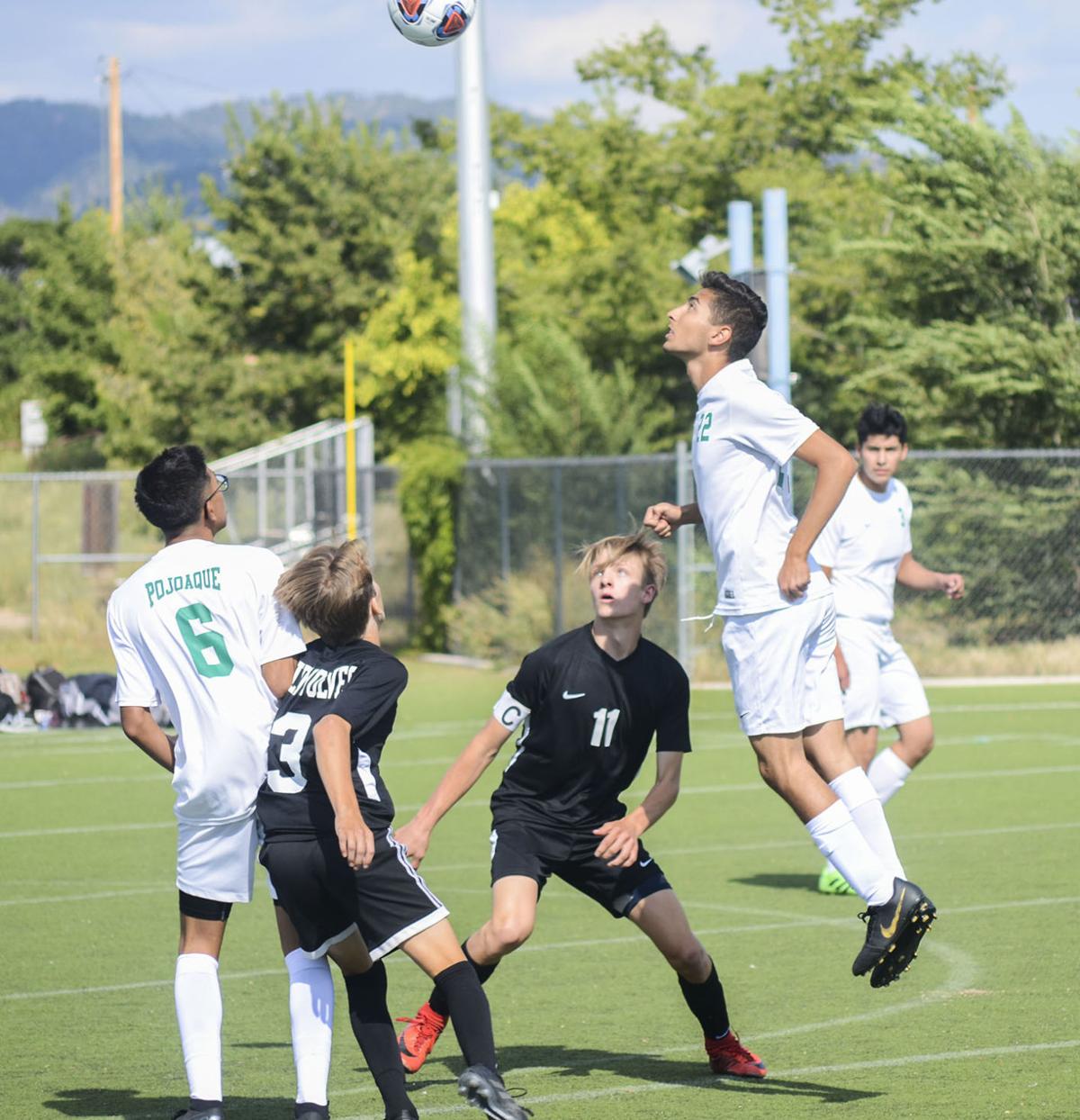 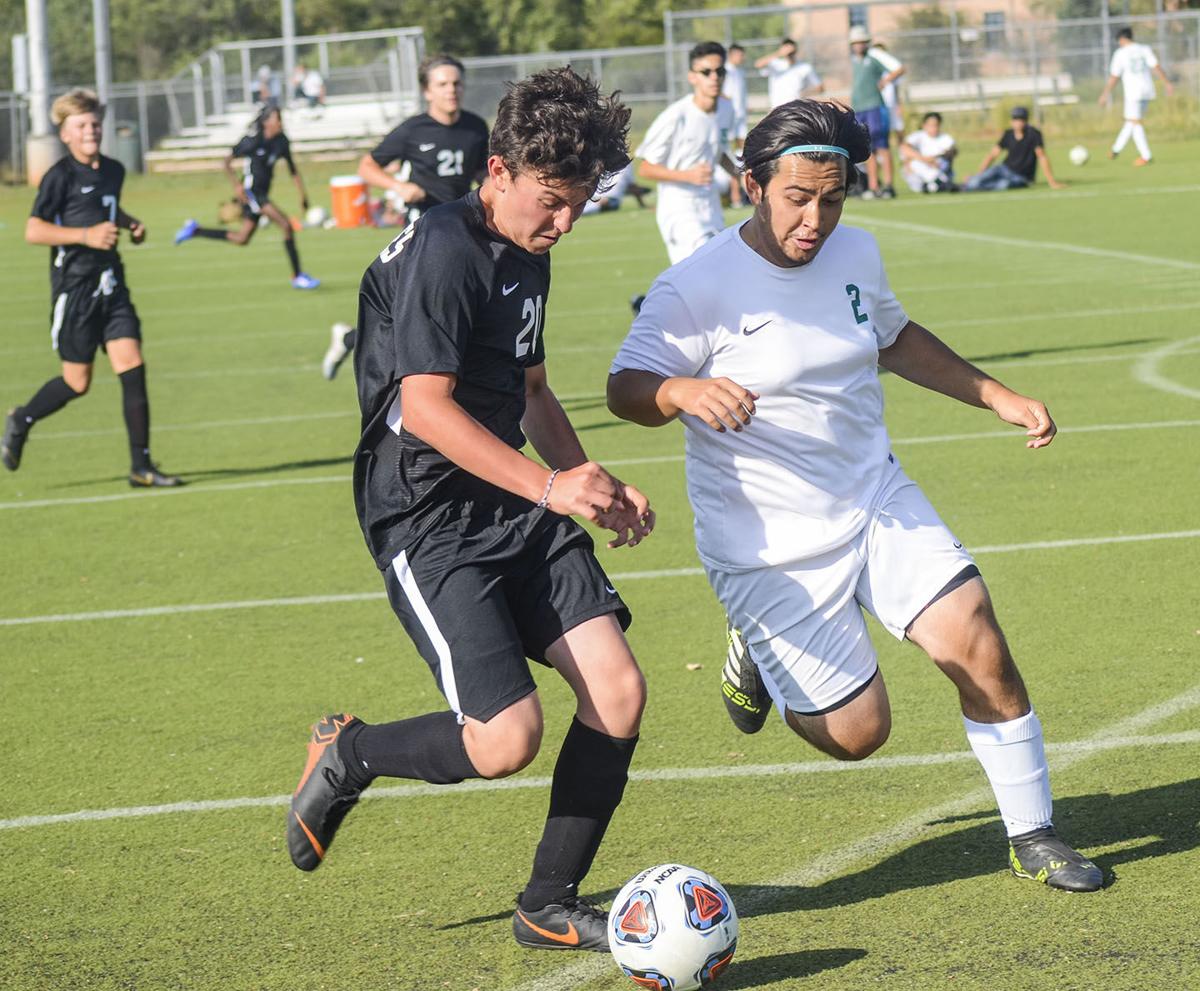 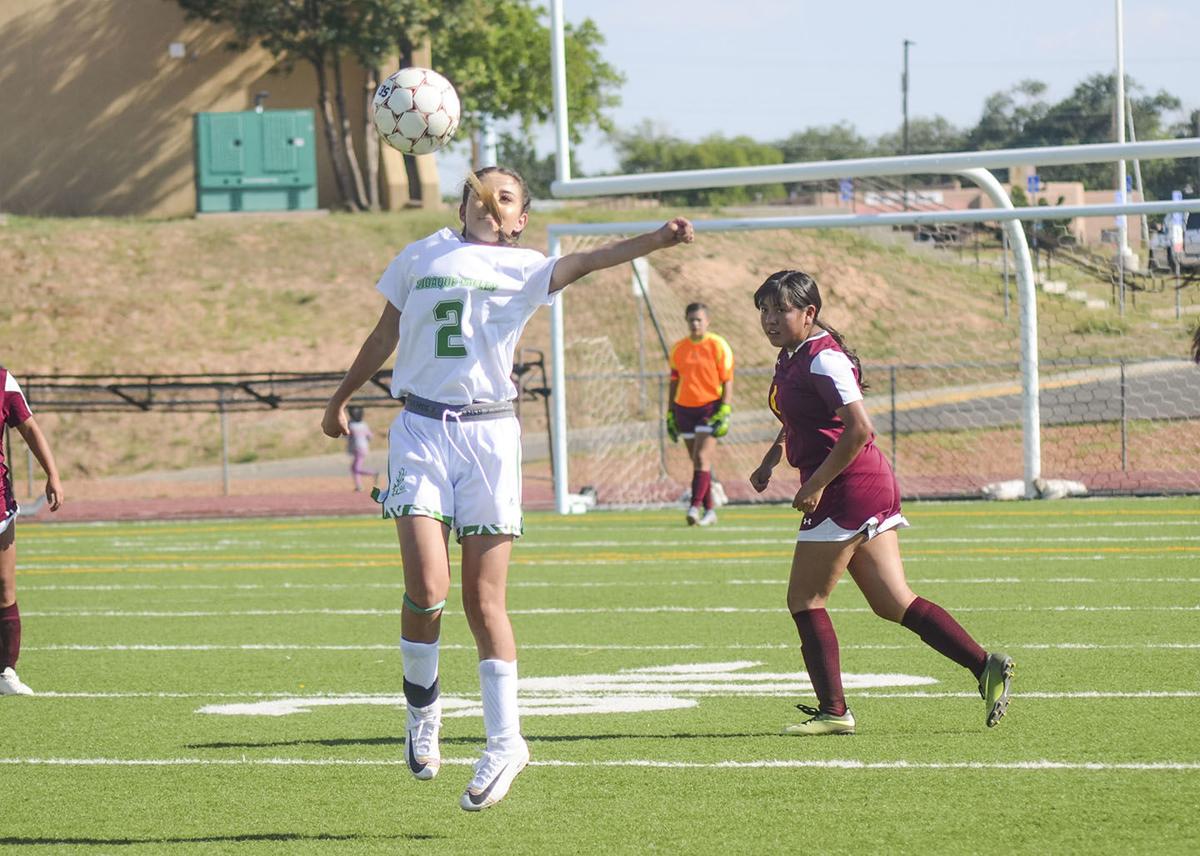 Pojoaque Valley’s Karla Carbajal plays the ball on a throw-in ball during the Elkettes’ 1-0 loss on Sept. 5 at Santa Fe Indian School against the Lady Braves. 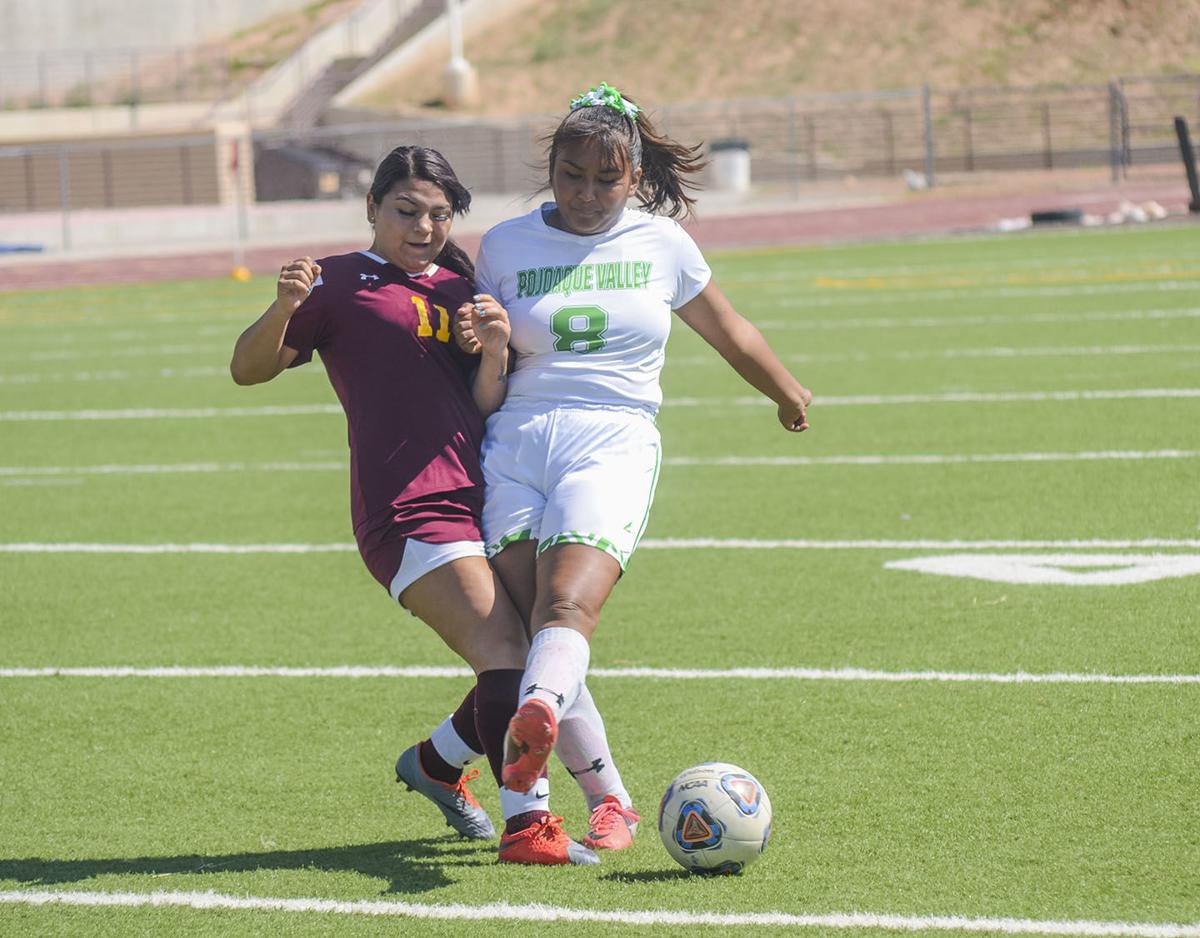 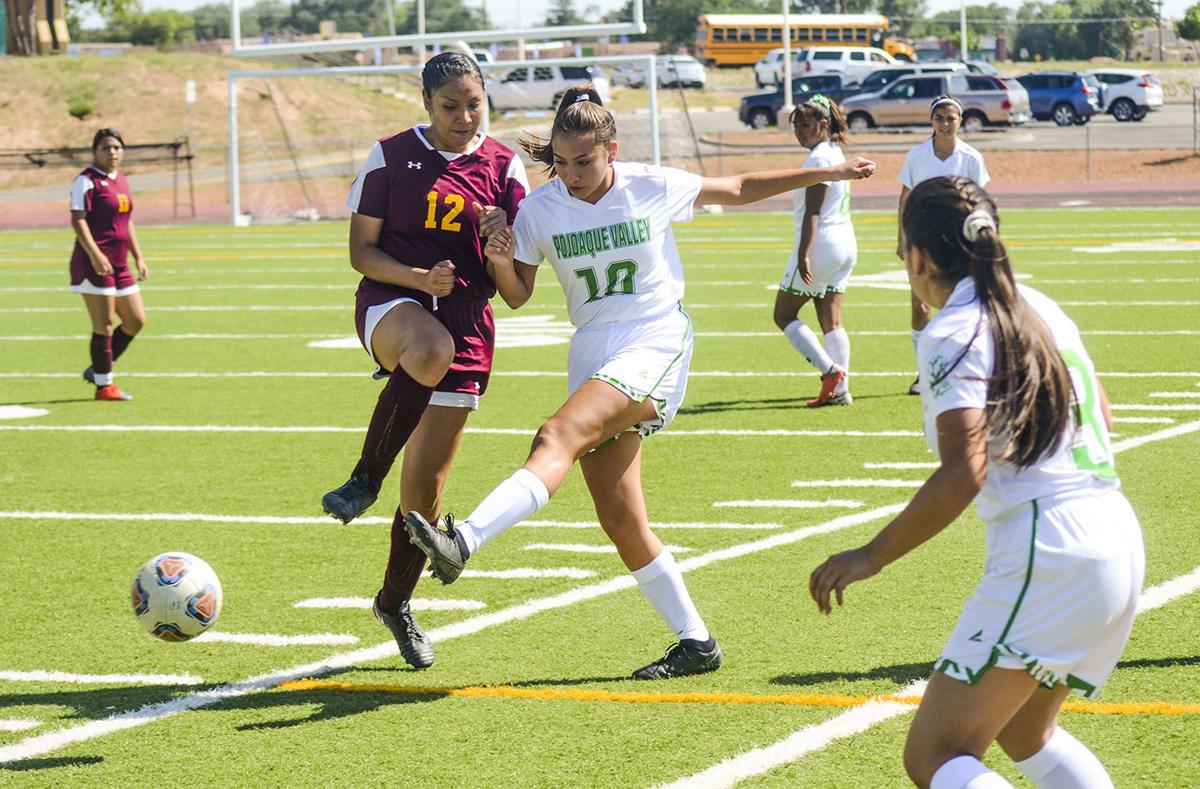 Pojoaque Valley sophomore Christian Holguin scores on a penalty kick in the first half of the Elks’ 6-2 win over Desert Academy/Santa Fe Waldorf on Sept. 4 at Alto Park in Santa Fe. Holguin led Pojoaque with four goals and two assists in the Elks' second win of the season.

Pojoaque Valley freshman Kevin Valencia looks to gain possession of the ball during the Elks’ 6-2 win over /Desert Academy/Santa Fe Waldorf on Sept. 4 at Alto Park in Santa Fe.

Pojoaque Valley’s Karla Carbajal plays the ball on a throw-in ball during the Elkettes’ 1-0 loss on Sept. 5 at Santa Fe Indian School against the Lady Braves.

The Pojoaque Valley High School boys soccer team hosted Robertson High School on Tuesday in a game where the result was not available by press time, however, the Elks had nearly a full week of practice prior to that game where they had a fulfilling, sweet taste in their mouths.

The reason being was Pojoaque picked up a huge victory in their prior outing, and they did so in a dominating effort to improve to 2-3 on the young season. They out-shot and out-worked Desert Academy/Santa Fe Waldorf to earn a 6-2 win on Sept. 4 at Alto Park in Santa Fe.

Pojoaque dominated in shots and shots on goal, as they out-shot Academy/Waldorf 24-to-seven overall, and 16-to-nine on shots on goal.

The Elks not only proved to be the better team, but they also proved they were the team with the ability to be quicker to the punch on that day. They took an early 2-0 lead in the fifth minute of play after Holguin scored his first goal on a penalty kick after being tripped up by a Wildwolves’ player.

Saenz scored a minute-and-a-half earlier from the right side of the penalty area after receiving the setup and assist from Holguin.

The early momentum was something the Elks and their head coach Juan Ortiz were not used to so far this season, as falling behind early has haunted them in five-point losses to St. Michael’s High School and Kirtland Central High School and in a seven-point loss in another matchup with the Horsemen.

While already being exposed to some solid competition, the players and Ortiz were looking forward to the matchup with the co-op program.

“A lot of these guys were expecting a lot more from themselves, but it was positive and it does help to get the lead early because then we are not pressing so much,” Ortiz said. “If they were to get the first point, we tend to fall apart if we don’t score first. So, that is big for us to score first.”

Pojoaque would score again in the 27th minute after Holguin notched his second goal of the half to up the lead to 3-0. While the offense continued to score and develop possessions that ended in scoring opportunities, the defense did more than its fair share to follow suit.

The Wildwolves were not able to manage a shot on goal until the 29th minute, all while Pojoaque was already seven shots on goal deep at that time.

After the Elks took a 4-1 lead into the half, the defensive intensity they played with in the first half carried over to the second 40 minutes.

Academy/Waldorf would score again with 11 minutes remaining in the game, but that was long after Holguin pulled the plug on them after scoring his third and fourth goals of the game in the fifth and 17th minute of the half.

Ortiz was also satisfied with the team’s improved ball control and passing in the second half, and the ability to shift and rotate players into different positions for the younger players to gain experience.

One such move was moving starting goalkeeper Jacen Lujan from the net to the field in the second half. Lujan recorded one assist amid the change and recorded two saves with one goal allowed in the first half.

Josiah Enriquez moved to goalkeeper in the second half and also stopped two shots while allowing one goal.

The big win was much needed after the Elks had lost their three games by an average of 5.6 goals. Their previous and only other win did come in another dominating performance when they defeated Bernalillo High School 7-0 on Aug. 30 in the Sangre de Cristo Classic tournament in Taos.

“They had a lot better communication and less arguing,” Ortiz said. “They get on each other’s case, which is good, but I’d like to see them communicate a little easier and we were able to do that today.”

The Elks will retake the field at home at 6 p.m., Thursday (9/12) when they host Monte Del Sol Charter School for a non-district matchup.

Santa Fe Indian gets the 1-0 win

While the final result still ended in a loss, the number of positives seemed to temporally outweigh the 1-0 deficit posted on the scoreboard at the end of the game.

The fifth contest of the season for the Pojoaque Valley High School girls soccer team yielded a familiar result as the first four contests, but the Elkettes (0-5) certainly made some strides in their Sept. 5 road game at Santa Fe Indian School.

The Lady Braves would prevail and walk away with a 1-0 victory, but the final margin was far less than what Pojoaque was used to in the early stages of 2019.

The Elkettes dropped their first four games by an average of nine goals, so the improved play against the Indian School was one small, positive step in the right direction.

First-year Pojoaque hard coach Allison Garcia-Dowdy declined to comment after the game, but Elkette captains Jessica Roybal and Analeez Atencio were more than willing to express their thoughts on the team’s best performance of the season thus far.

Both girls were satisfied with the improved play on offense despite not scoring any goals.

“That was encouraging, given we had trouble with that in the past,” Atencio said. “It was a nice change to where we at least had opportunities where we could score.”

Indeed, the Elkettes did control the ball on the Lady Braves’ side of the field for a majority of the 80 minutes, but all the Indian School needed was one opportunity to steal the game.

Their first shot on goal of the entire game resulted in the decider, and it was junior Jalene Sandoval who made the most out of the situation.

In the 20th minute of the second half, Pojoaque goalkeeper Maddie Gonzales booted a goal kick, which went on to drill Sandoval directly in the face about 30 yards downfield as she jumped to try and gain possession.

The moment produced equal laughs from players and fans, and Sandoval hesitated for just a moment to regain her composure before she was able to keep the ball down near Pojoaque’s goal.

The sequence ended several seconds later after a few passes and fighting with Elkettes as Sandoval booted the ball to the top shelf on the left side of the goal above the outreached right arm of Gonzales.

“We don’t have a lot of really good ball stirkers on the team but she’s one of them,” Indian School head coach Marc Newton said about Sandoval. “She didn’t quit and she kept the ball in front of her. I don’t know if she meant to chip it or if it was a miss hit, but either way it went in the net — we’ll say she placed it there.”

The Lady Braves would record one more shot on goal in the final 20 minutes, and Pojoaque out-shot the Lady Braves in shots on goal, 3-2.

Newton said the Lady Braves are still adjusting to the graduation of nine seniors from a season ago, and he’s yet to see things translate onto the field yet. He agreed that Pojoaque is in a similar situation as far as experience goes, so the way the game panned out was no surprise to him.”

“We were asleep in the first half,” he said. “We’ve picked up nine girls who have not even really played in a soccer game. It’s kind of an uphill battle right now. When you have two teams like this play against each other, you get a lot of, ‘The ball comes to me and I got to kick it — somewhere — it doesn’t matter where, I just gotta get rid of it.”

Pojoaque traveled to Robertson High School Tuesday, and those results were not available by press time. They retake the field at 4 p.m., Thursday (9/12) back at home to host Monte Del Sol Charter School.