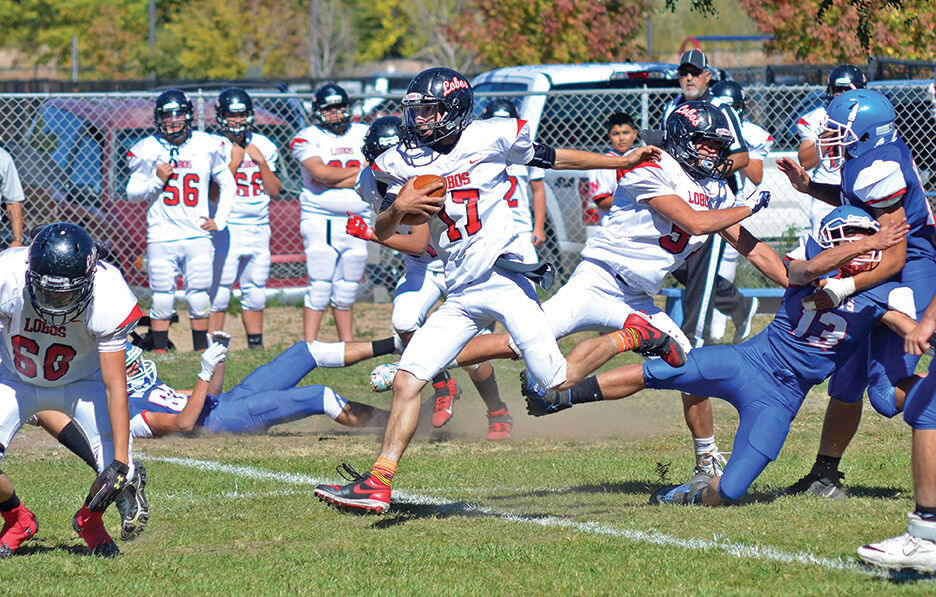 Escalante High School's Isaac Archuleta (17) breaks past defenders during a long run. The senior quarterback's four touchdown runs in the game led the Lobos to victory. Archuleta has tallied 17 rushing touchdowns on the year, and nearly 1,000 yards total, with two more passing touchdowns. 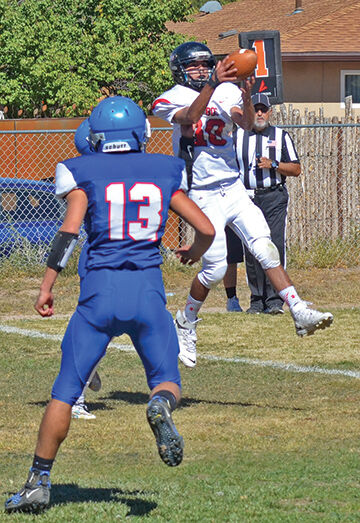 Escalante High School sophomore Luka Torrez makes a catch for a two-point conversion. The Lobos rely heavily on the run game every week, but they can find success through the air when needed and when the pass opens up after their rushing triumphs.

Escalante High School's Isaac Archuleta (17) breaks past defenders during a long run. The senior quarterback's four touchdown runs in the game led the Lobos to victory. Archuleta has tallied 17 rushing touchdowns on the year, and nearly 1,000 yards total, with two more passing touchdowns.

Escalante High School sophomore Luka Torrez makes a catch for a two-point conversion. The Lobos rely heavily on the run game every week, but they can find success through the air when needed and when the pass opens up after their rushing triumphs.

Escalante’s most recent football game had an extra meaning to the players.

Mateo Baca, a sophomore safety and wide receiver, was injured in a car accident the day before the game.

The Lobos broke pregame huddles with “Mateo on 3!” in honor of their injured teammate.

“This one was for him,” said senior lineman Jose Torrez, Jr.

Escalante coach Thomas Royston said Baca will be OK and talked to him before and after the game, but he will be out the rest of the season.

“They wanted this for Mateo, bad,” Royston said

“Escalante, they have a mentality that when they start their season, they already know that they’re good,” said McCurdy coach Robert Nevarez. “That is something that hopefully one day we’ll get to.”

McCurdy coach Robert Nevarez said he did not know the full extent of the rivalry, being new to the area after moving to Colorado and with the two teams not having met since 2018.

McCurdy was without starting quarterback and safety Marcos Gasca, who missed the game with a collarbone injury suffered the prior week. Gasca said he will be back for basketball season, so he is happy not to miss his entire senior year, and is supporting the football team from the sideline.

Freshman Jeremaya Roybal took over at quarterback, but rotated on and off the field with Nevarez going run-heavy and often having the running backs lead the offense, but they went scoreless and struggled to move the ball.

“(Escalante) put 10 men in the box, they took the edge away from us,” Nevarez said. “We live and die by getting to the edge. And we just couldn’t get there today.”

After a slow start, McCurdy looked better as the game went on, forcing stops on defense and moving the offense in a positive direction. But six turnovers killed their chances of keeping the game close while they did not force a single one.

On the opening kickoff, Escalante brought out their “starburst” return play, where Isaac Archuleta turned his back to the defense and faked multiple handoffs before giving to Luka Torrez, who ran all the way down to the one yard line. Archuleta punched in a run on the first play from scrimmage for a touchdown.

When McCurdy got the ball back, they fumbled on their second play, and Archuleta scored a second time four plays later.

McCurdy’s second drive was more promising as they advanced into Escalante territory, but on fourth down they lost yet another fumble, and the Lobos led a long touchdown drive, with Archuleta scoring his third of the quarter, to take a 22-0 lead.

The best drive of the game for the Bobcats came at the start of the second quarter when they reached the red zone, but turned over on downs at the 16-yard line.

The Lobos scored two more times in the second quarter. And after taking a 28-0 lead, Escalante started their “Senior Run” tradition, where each senior lineman rotates in at running back for a carry one play at a time.

“They love that,” Royston said. “They’ve been asking since two-a-days.”

Royston said the tradition started with previous coach Dusty Giles as a way to recognize the seniors who battle in the trenches.

Senior tackle Miguel Ulibarri scored on a 15-yard touchdown run in the second quarter. And Torrez, who had missed four games earlier in the season, scored on a run in the third quarter on his second attempt - Royston said he got a second carry for the touchdown because he was a team leader and they wanted him to score after missing games.

In the fourth quarter, the game started getting chippy in the rivalry, with some trash talk leading to multiple personal fouls, and some fans on the Escalante sidelines were ejected for being aggressive with officials.

Jolen Montoya was the leading rusher at 51 yards for McCurdy, and Lucas Martinez added 44 yards. Roybal threw 2-for-11 for 42 yards and two interceptions with one lost fumble.

For the Lobos, Isaac Archuleta was the leading rusher at 158 yards and four touchdowns. Trey Archuleta, who has stepped in at running back all year for the injured Gilbert Martinez, ran for 65 yards.

“Nobody expected us to win more than two games,” Ulibarri said. “We’re out here putting people in the dirt. It’s what the Lobos do.”

Next week, McCurdy will host Laguna-Acoma (2-6) for their season finale Saturday and look to pick up their second win of the season after multiple missed opportunities.

Escalante will play at home for their most important game of the year against Estancia (4-4) at home on Friday night (10/22) with a district championship on the line, and likely a spot in the state tournament only available to one of them.

Torrez said he is expecting “a dogfight” next week.

After the game, Nevarez met up with Royston, and told him that he would be cheering for them.

“Take care of business next week,” Nevarez said to Royston.