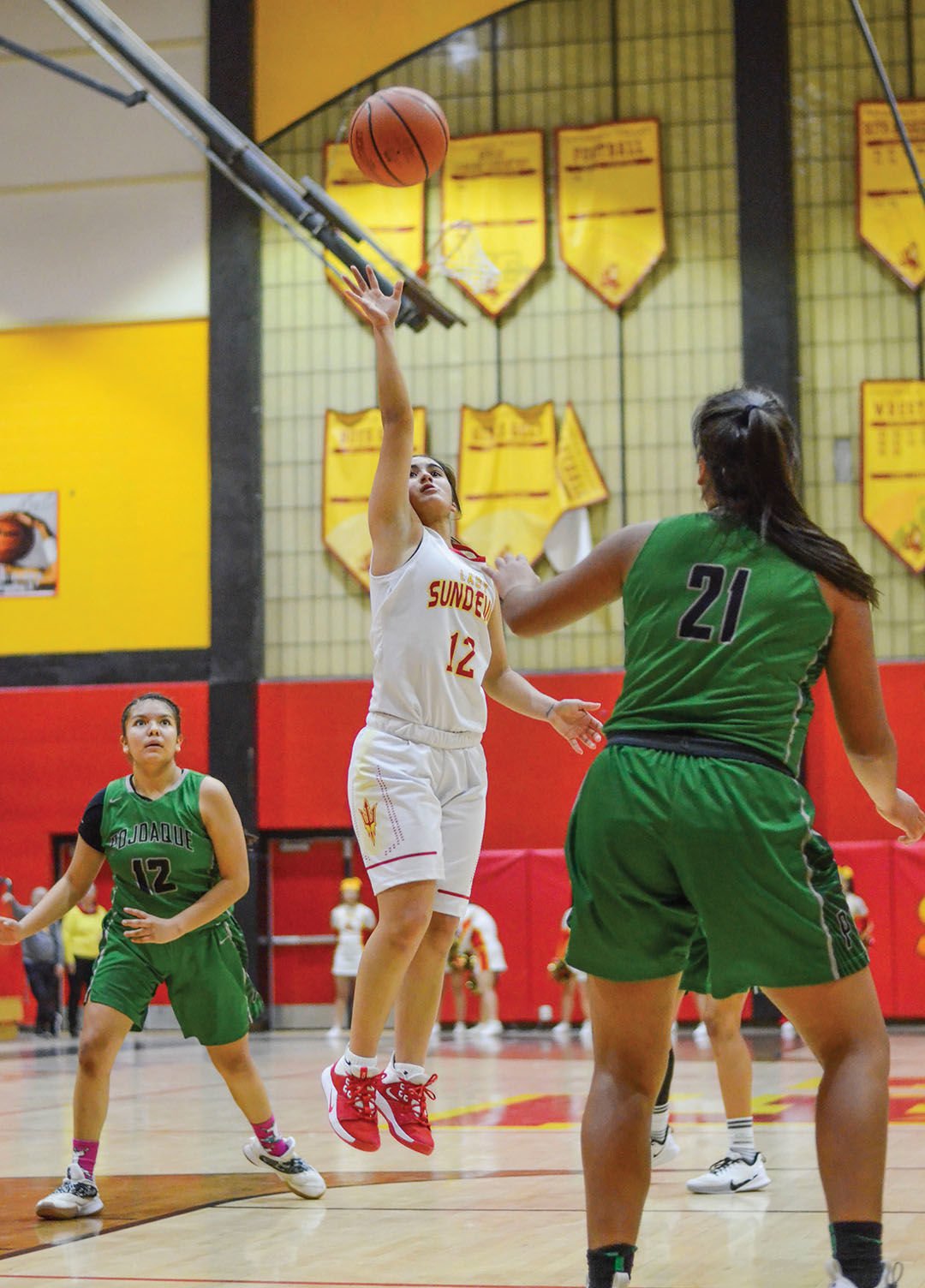 Española Valley’s Miranda Salazar shoots a floater in the lane against Pojoaque during the Lady Sundevils’ 55-52 win over Pojoaque on Feb. 7 at Edward Medina Gymnasium. 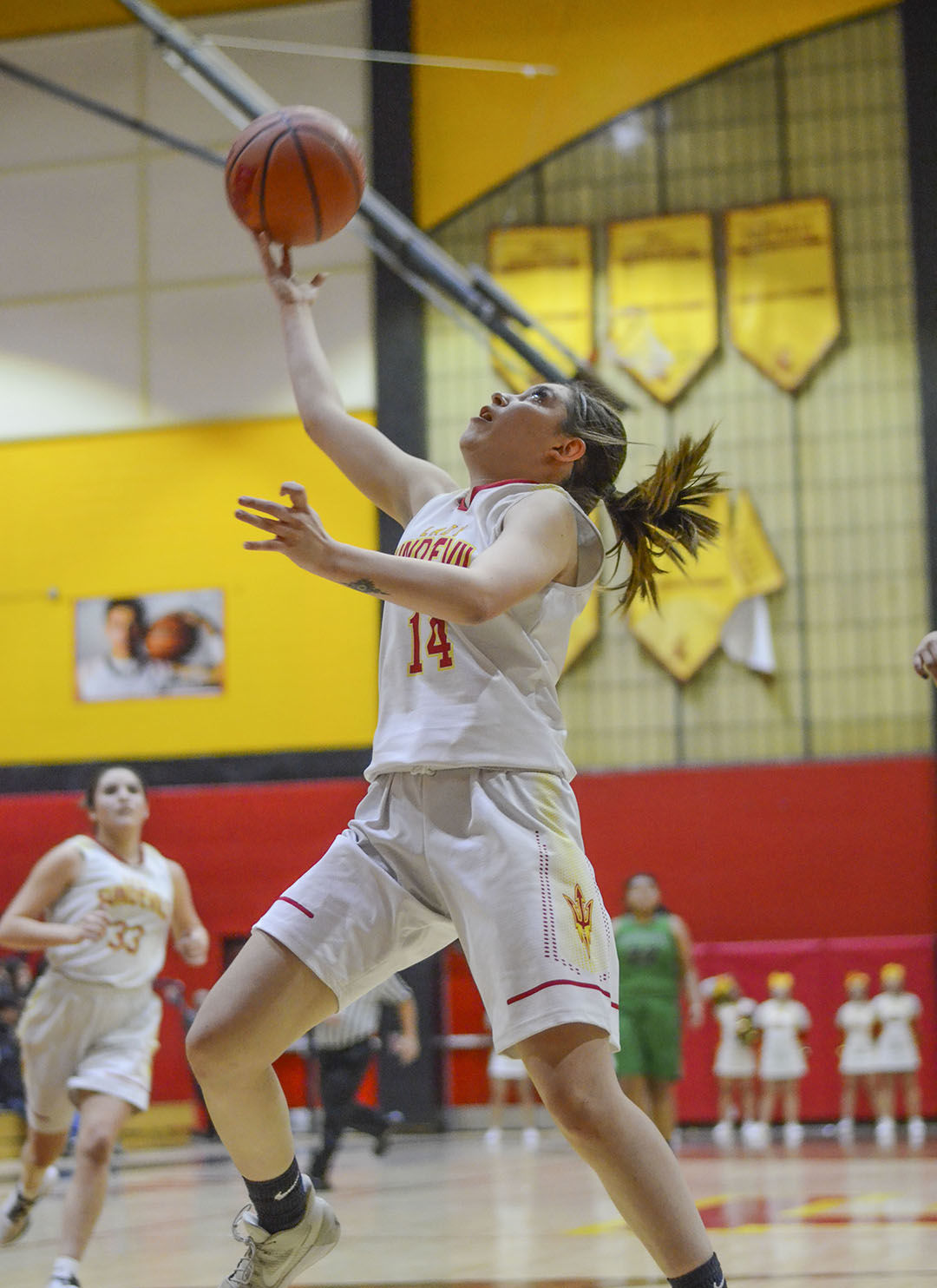 Española Valley’s Erika Medina converts on a reverse layup against Pojoaque during the Lady Sundevils’ 55-52 win over Pojoaque on Feb. 7 at Edward Medina Gymnasium. 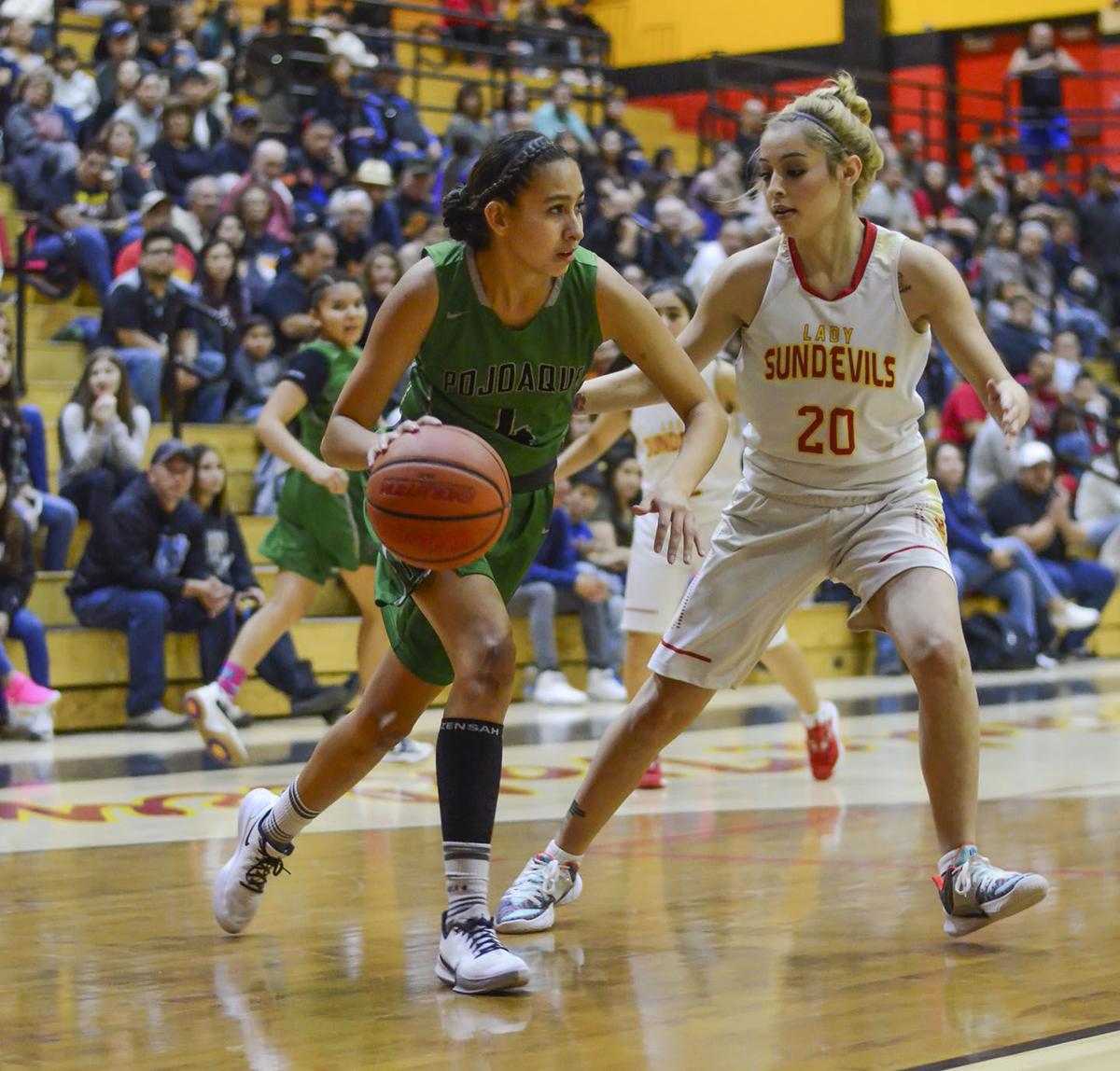 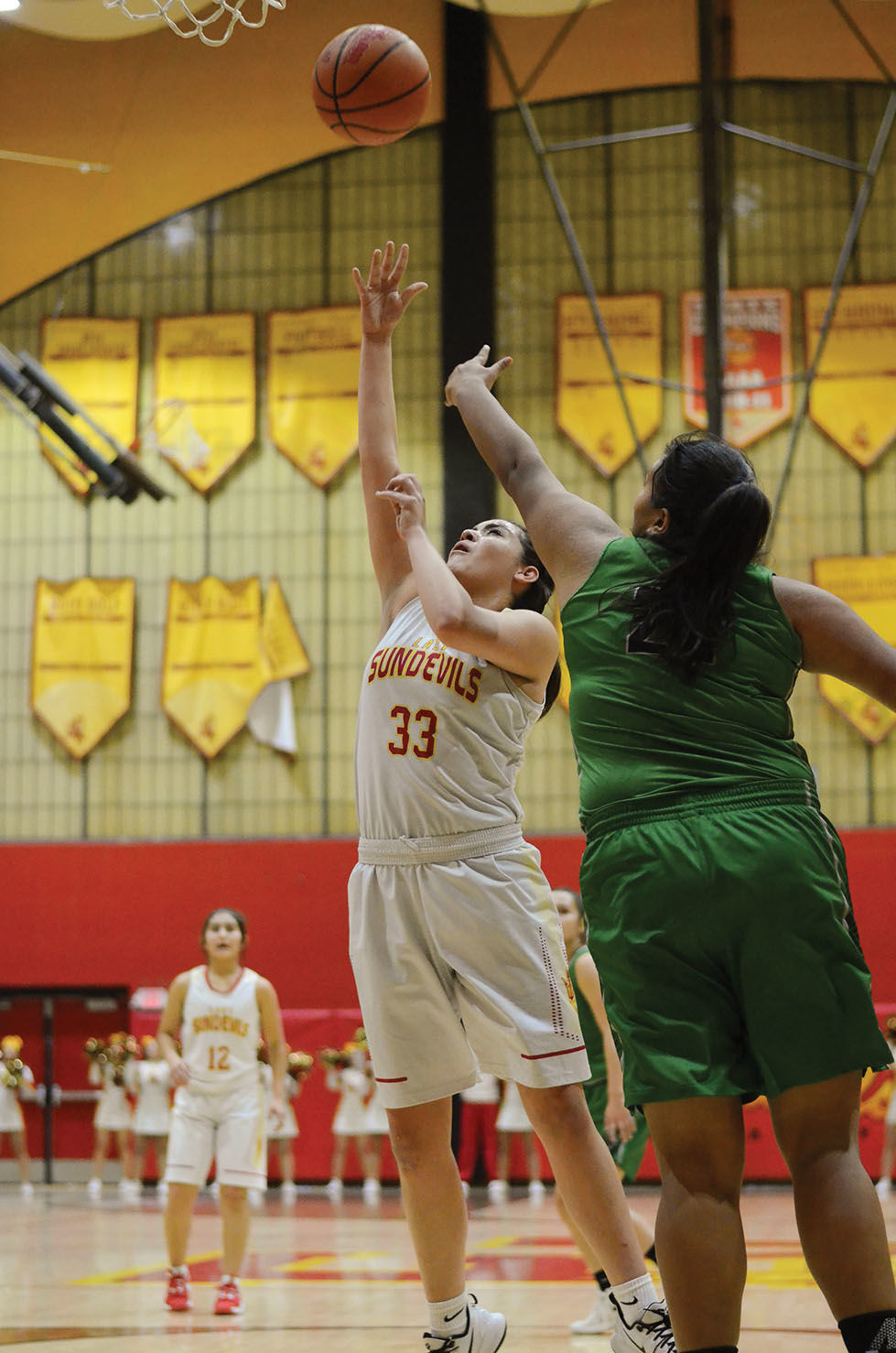 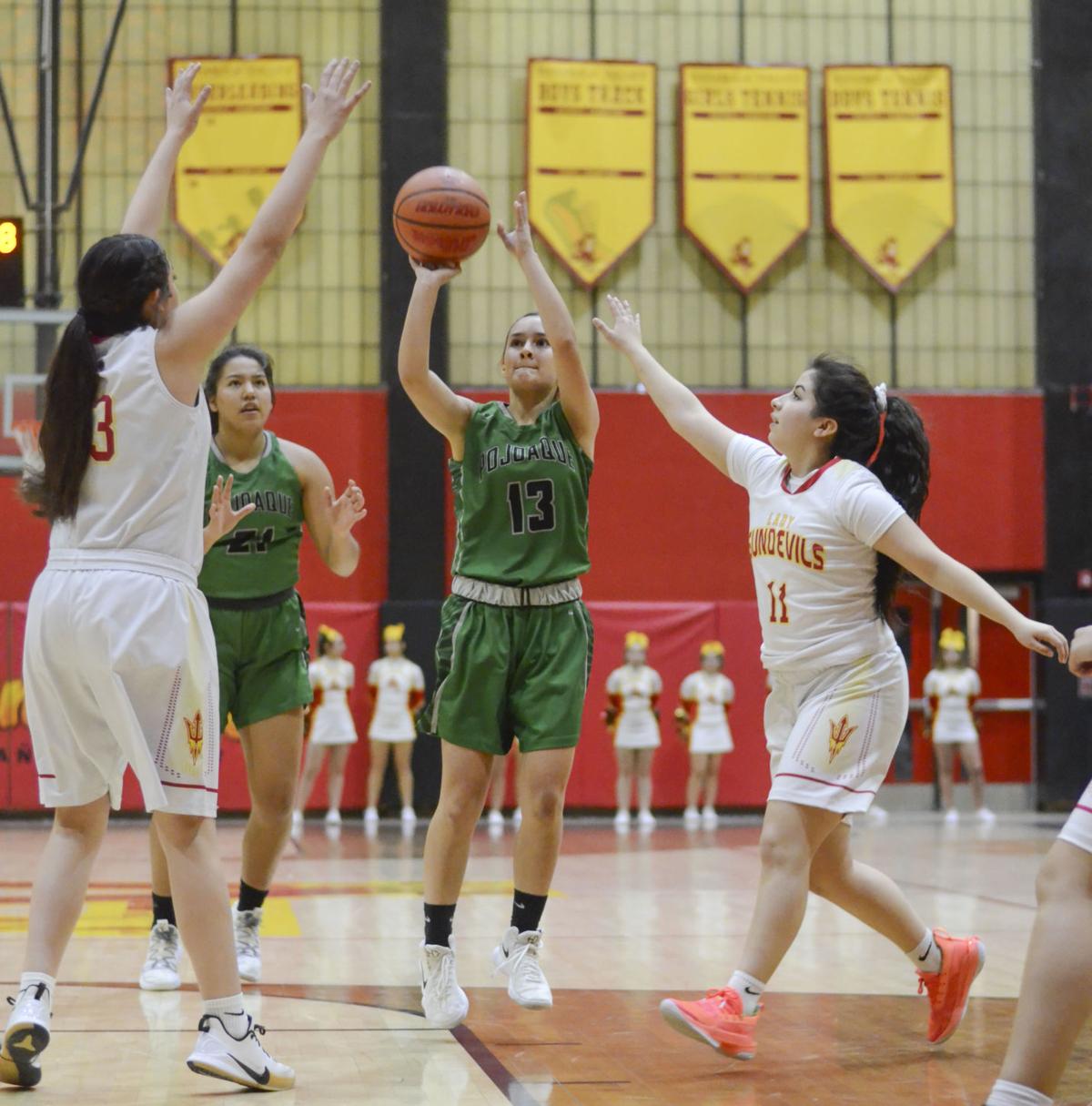 Española Valley’s Miranda Salazar shoots a floater in the lane against Pojoaque during the Lady Sundevils’ 55-52 win over Pojoaque on Feb. 7 at Edward Medina Gymnasium.

Española Valley’s Erika Medina converts on a reverse layup against Pojoaque during the Lady Sundevils’ 55-52 win over Pojoaque on Feb. 7 at Edward Medina Gymnasium.

It was evident some tension surfaced in the first quarter of the Lady Sundevils’ game against the Elkettes on Feb. 7 at Edward Medina Gymnasium, as Pojoaque hopped out to a 10-0 lead out the gate and looked all the part of a team ranked No. 5 in Class 4A by MaxPreps.

However, no double-digit lead was safe in this contest, and while both teams held margins of larger than 10 points, No. 10 Española would come out victorious with a 55-52 win.

With the win, The Lady Sundevils (14-9) are now tied with the Elkettes (17-6) atop the District standings at 4-1. Both teams have three District games remaining.

“I think we were nervous and some of my girls still have that thing with Pojoaque, man,” second-year Española head coach Joe Estrada said with a laugh. “They’re still trying to believe they are a better team than Pojoaque, but when I turned that corner (into the locker room after the game) they are already yelling, screaming and celebrating. I’ve never heard those girls that loud since I’ve been here, so this is a really good sign for us.”

Things took a turn in Española’s favor in the second quarter, as the Lady Sundevils’ press started to cause issues for Pojoaque. After trailing 16-14 after the first quarter, Española conducted an 11-0 run in the second quarter and grabbed its first lead of the game via a 3-pointer from the hands of Anita DeAguero.

Her bucket from the outside with 6 minutes, 13 seconds left in the quarter began the run, and it was capped off by a post move and score from Jaylynn Padilla, which increased Española’s lead to 27-17 before it held a 29-24 advantage at halftime.

After the break, the third quarter belonged to the Lady Sundevils’ Miranda Salazar. The sharpshooter tallied a game-high 18 points, and none were bigger than her 11 in the third. She drilled three triples in the quarter, and the third with 1:12 remaining gave Española a 44-34 lead amid an 8-0 run. The Lady Sundevils would lead 44-36 entering the final quarter.

In the fourth, Pojoaque mounted its own 8-0 run after Estrada was credited with a technical foul, but there was Salazar to halt it, who provided a floater from the lane to increase Española’s lead to 47-42 with 2:11 left in the game

On the very next possession, the Elkettes coughed up the ball near half-court, which led to a breakaway layup for Jasmine Baca. Now, with a 49-42 advantage, Pojoaque head coach Seledon Martinez had no choice but to call a timeout.

The Elkettes would eventually cut the lead to 53-52 in the final half-minute of the game, but with 4.7 seconds remaining, Española’s Destiny Valdez was able to dribble out enough time on the clock after receiving the final inbounds pass, as she was not fouled by the Elkettes until only 0.2 remained.

Over the course of the season, Española has received plenty of zone defense by its opponents, but Martinez opted to play the Lady Sundevils man-to-man for a majority of the game, a strategy that would come back to bite the Elkettes.

“We used our quickness to get past them and free people up,” she said. “We were able to drive on them and make them collapse, then we used our court vision to find the open shooters. On defense, putting the pressure on them scared them a little bit; that helped us because we were forcing them into turnovers and that pumped ourselves up a ton.”

Martinez’s plan was to limit Española’s 3-point shooting, and while the man-to-man defense helped hold the Lady Sundevils to seven triples for the game, Española center Kianna Duran stepped up and took advantage inside.

The junior scored 13 points for the game, which included seven in the first quarter to help Española overcome the early 10-point disadvantage.

“We went man and we left Duran alone because we thought she was their weakest player,” Martinez said. “Credit to her, she made a few shots tonight, but for us, that was better than allowing 3s. We had to pick our poison.”

When asked about the Elkettes’ defensive strategy — after a slight pause — Estrada had a different viewpoint as to why his coaching counterpart selected to play man-to-man.

“We want teams to play man on us and I’m not so sure why he (Martinez) decided to do that,” Estrada said. “Maybe he was just trying to throw us off, but more so, I think he pretty much thinks we are just a 3-point shooting team. We are working more on being a dribble-and-drive team too, and we showed that tonight.”

The Pojoaque scoring efforts were led by 12 points from Tonni Aquino, while Michaela Martinez and Ashten Martinez totaled 11 points apiece. Aside from Salazar and Duran, Española also received eight points from Valdez and seven from Baca.

“Let’s see what happens and see if they win out or we win out,” coach Martinez said.