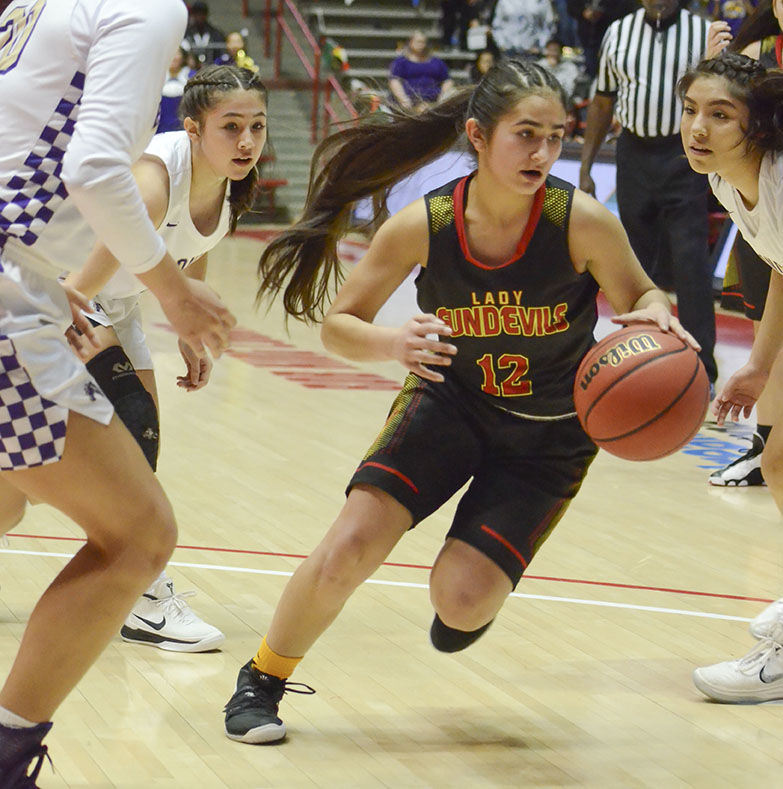 Española’s Miranda Salazar dribbles through a crowd of Kirtland Central defenders during the Lady Broncos’ 55-23 win over the Lady Sundevils in the Class 4A semifinals March 14 at Dreamstyle Arena-The Pit. 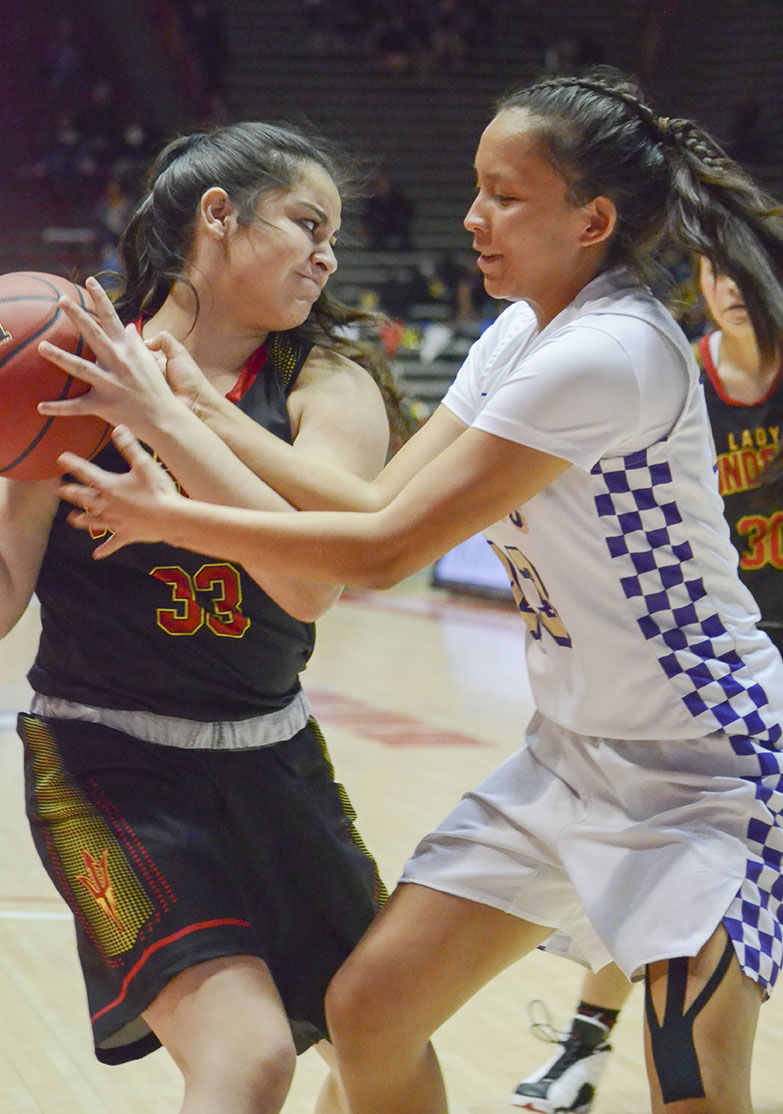 Española’s Kianna Duran tries to hold onto possession of the ball as Kirtland Central’s Avery Begay looks for a steal during the Lady Broncos’ 55-23 win over the Lady Sundevils in the Class 4A semifinals March 14 at Dreamstyle Arena-The Pit. 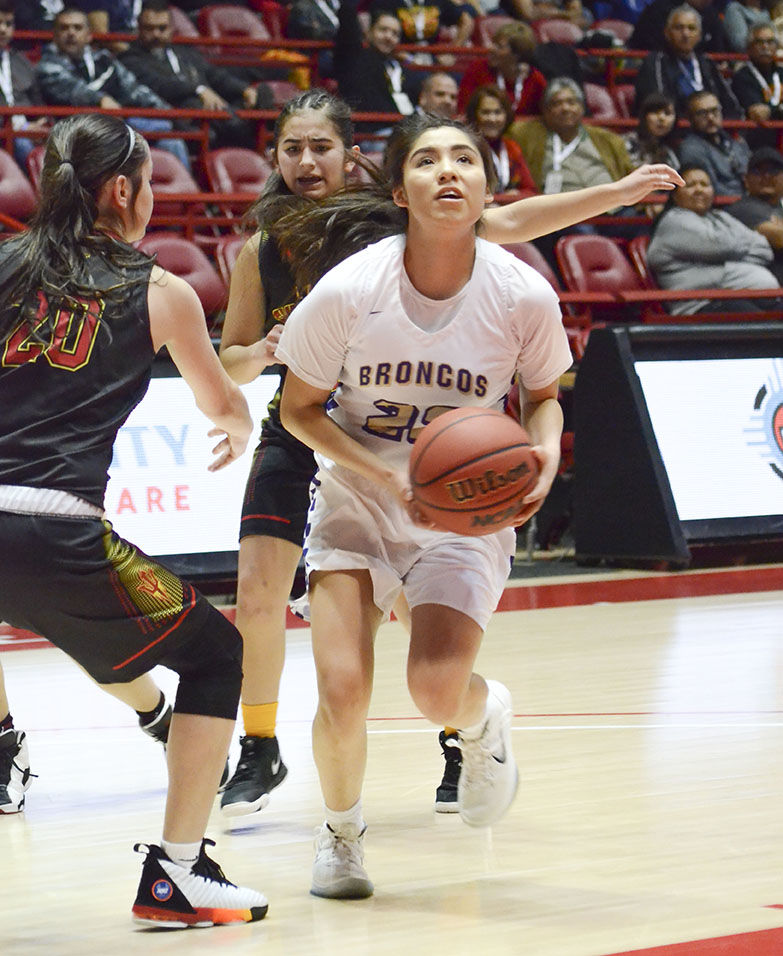 Kirtland Central’s Tatelyn Manheimer approaches the basket for a layup during the Lady Broncos’ 55-23 win over the Lady Sundevils in the Class 4A semifinals March 14 at Dreamstyle Arena-The Pit. 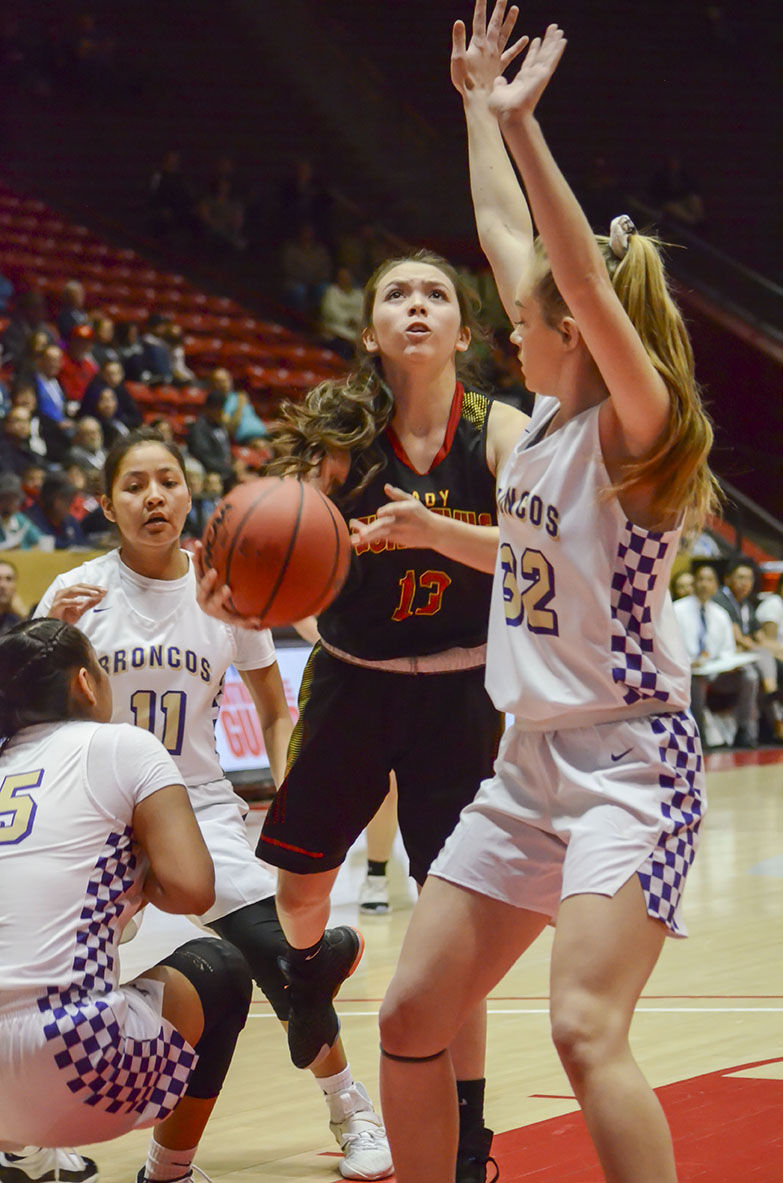 Jasmine Baca goes in for a layup attempt. 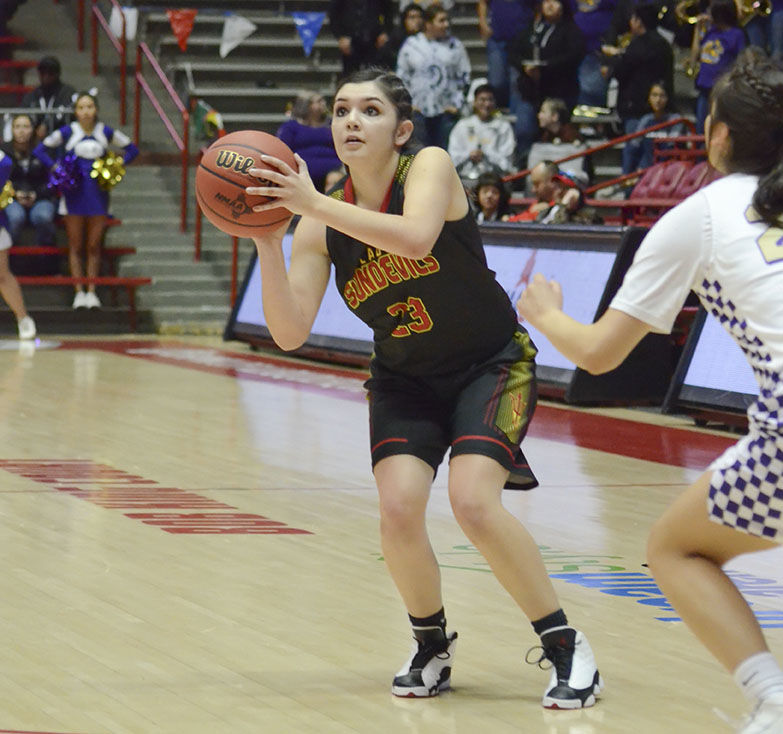 Española’s Miranda Salazar dribbles through a crowd of Kirtland Central defenders during the Lady Broncos’ 55-23 win over the Lady Sundevils in the Class 4A semifinals March 14 at Dreamstyle Arena-The Pit.

Española’s Kianna Duran tries to hold onto possession of the ball as Kirtland Central’s Avery Begay looks for a steal during the Lady Broncos’ 55-23 win over the Lady Sundevils in the Class 4A semifinals March 14 at Dreamstyle Arena-The Pit.

Kirtland Central’s Tatelyn Manheimer approaches the basket for a layup during the Lady Broncos’ 55-23 win over the Lady Sundevils in the Class 4A semifinals March 14 at Dreamstyle Arena-The Pit.

Jasmine Baca goes in for a layup attempt.

The first-seeded Kirtland Central High School girls basketball team didn’t have to live by it for long, but certainly used it to their advantage in the first quarter to quickly build a lead and assert their dominance over No. 13 Española Valley High School in the girls Class 4A semifinal March 14 at Dreamstyle Arena-The Pit.

Guided by five triples to burst out the gates, Kirtland (27-3) won it’s 24th game in 25 tries and cruised by the Lady Sundevils (17-12) 55-23 to end an upset-guided tour through the state tournament by Española.

The Lady Broncos shot 40 percent from beyond the arc (8-of-20), while Española — who relies on the deep ball — shot a mere 4-of-22 on 3s and only made eight field goals all morning throughout the duration of the game that started at 8 a.m. to open up the day at The Pit.

“We knew they’d shoot well today,” Española head coach Joe Estrada said. “We knew we had to shoot well today, it just wasn’t there for us. I thought after those first few 3s we played pretty good defense and took that three away from them.”

“I think if we would have taken it to the basket more and maybe made a few more 3s, I think our momentum would have gone up and our confidence as well,” Española senior Kaylee Chavez added. “It would have been more of a different game.”

Kirtland didn’t hit any triples in the second quarter and only made three more in the second half, but what the Lady Broncos couldn’t get from the outside, they easily made up for from inside the arc and from an entirety: receiving 22 bench points, while 10 of 12 players scored.

To really show how well the ball was spread around and how balance was maintained, Tatelyn Manheimer was the lone Lady Bronco in double-digits with 15 points and the next-highest scorer was Siigrid Lii’bilnaghahi with seven.

“Our strength of our team is our depth,” Kirtland head coach Devon Manning said. “We go nine strong and we don’t get tired. I don’t let the girls go long enough to get tired, so that’s been our strength and yeah, we gave them a little bit of trouble in December too.”

Manning was referring to the teams’ first meeting of season on Dec. 11 at Kirtland, where the Lady Broncos used a similar press defense and pressure to take a 65-27 win on that day.

“We were not supposed to be here,” Chavez said. “People said we were here with the one, the two and the three (seeds) and we were the 13, fighting. We gave it our all. They had good pressure, and I feel like their pressure was there and along with all the energy from their fans in the gym, that was a big factor too.”

Behind their pressure, length and faithful, the Lady Broncos gathered a 27-12 halftime lead and began the third quarter where they left off by scoring the first nine points before Española’s Kaylinn Martinez finally got the Lady Sundevils on the board with 4:32 remaining in the quarter.

Kirtland held Española to three points in the quarter, extended their lead to 41-15 and would go on to outscore the Lady Sundevils 14-8 in the final eight minutes.

Española’s two seniors in Chavez and Martinez carried the team for a majority of the season and both topped the scoring column in their final career game with eight and seven points.

“As we got older, we gained more leadership from the previous leaders,” Chavez said. “I think we were more encouraging leaders and we’re gonna be back again, watching our youngins.”

Besides the two seniors, Española played a majority of sophomores in a season that certainly had its ups and downs.

The Lady Sundevils split their first 12 games and finished third in regular season district play behind Los Alamos and Pojoaque Valley High School, and despite not advancing to the championship game of the 2-4A district tournament, Española still ended up traveling two games farther in the state tournament than their higher-seeded district foes.

Their state run included a 10-point win over No. 4 Pojoaque in the first round to avenge two regular season losses to the Elkettes by a combined four points.

The Lady Broncos just played at a higher-level, and they pushed all the way to the championship game before finally meeting their match in a loss to No. 2 Los Lunas, the defending champions.