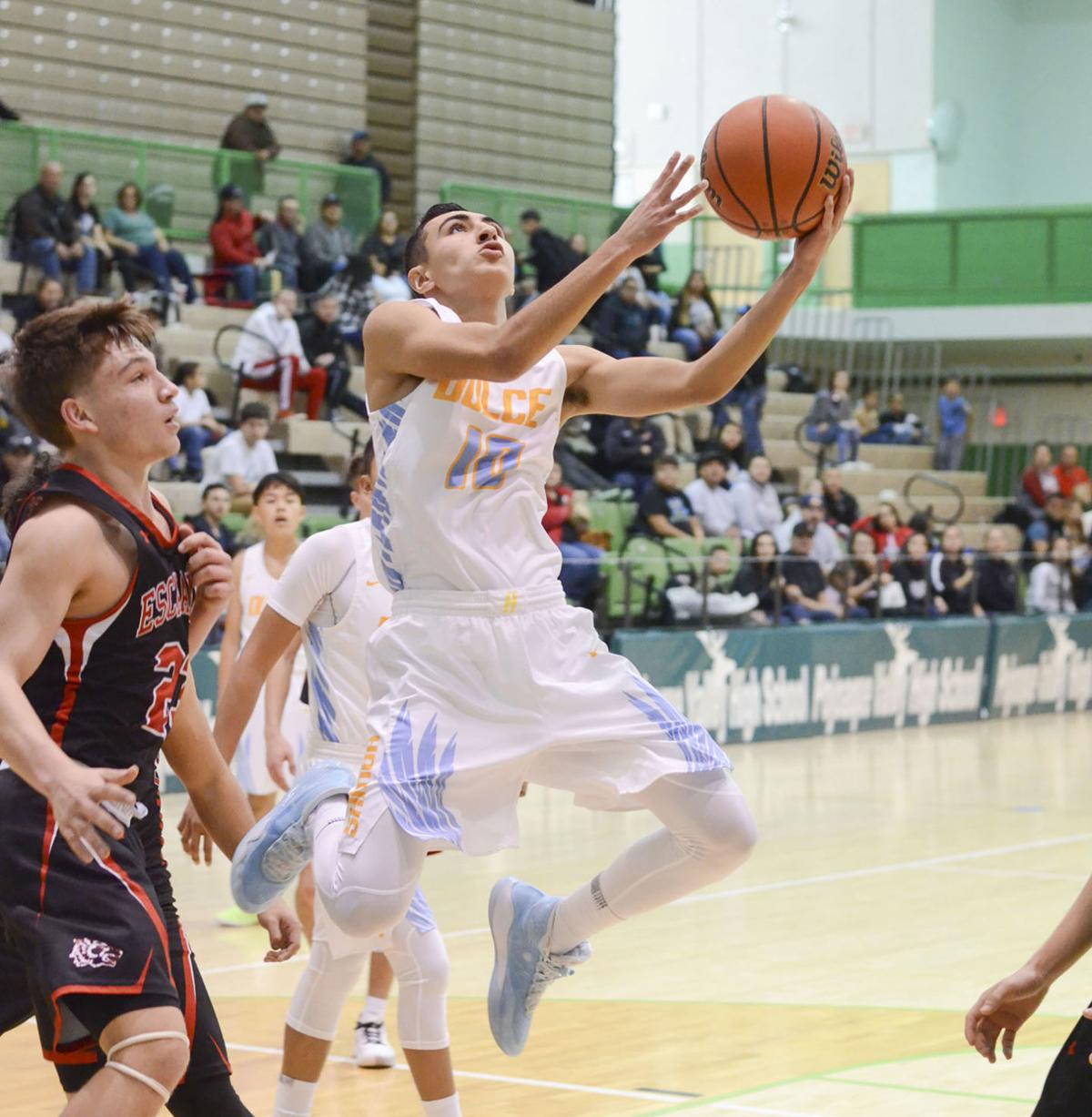 Dulce’s Antonio Tellez scores on a reverse layup against Escalante during the Hawks’ 75-63 win over the Lobos in the NRG Tournament consolation championship game on Jan. 4 at Ben Luján Gymnasium. 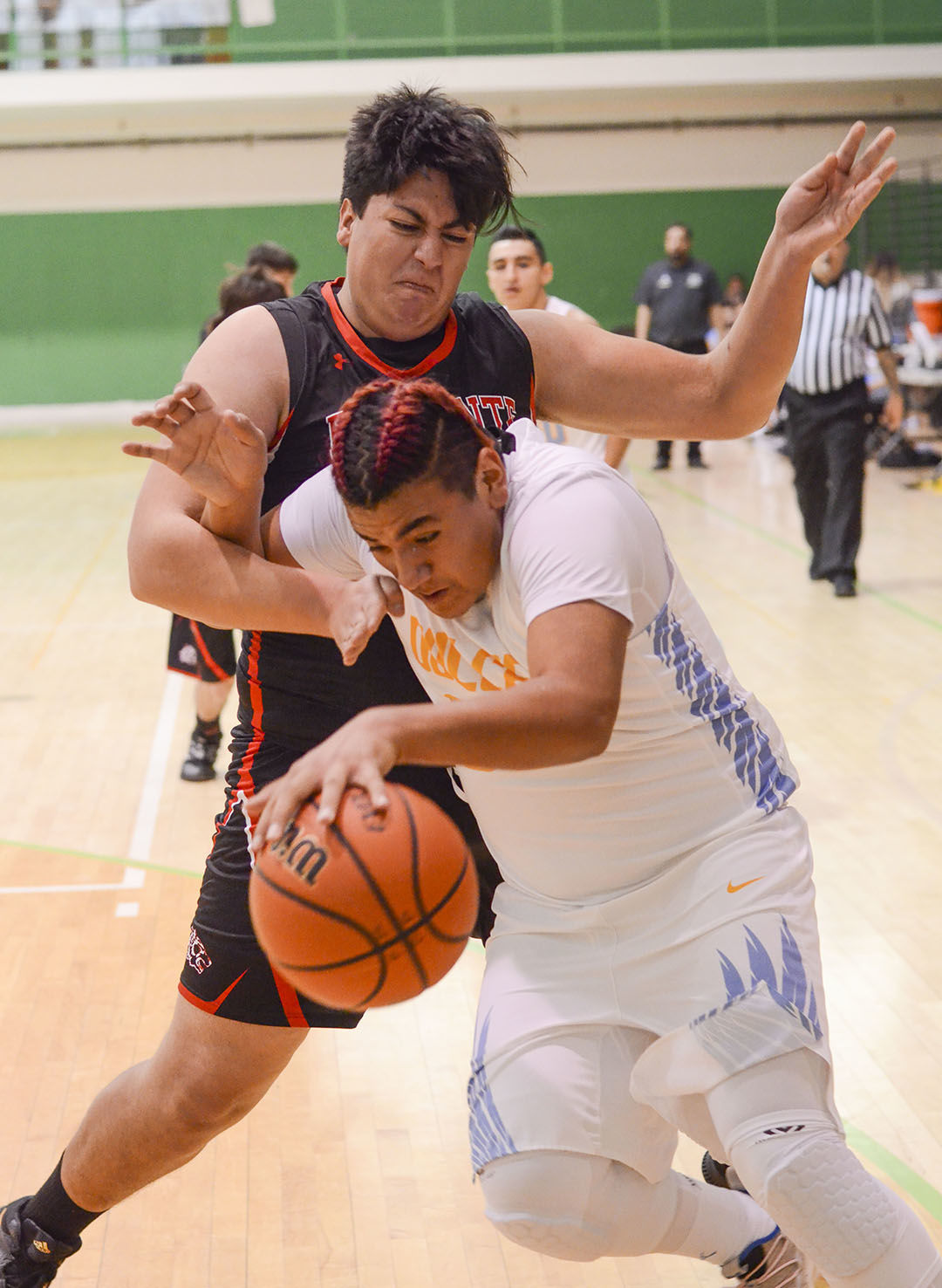 Dulce’s Santiago Largo dribbles down the baseline while being guarded by Escalante’s Andres Salazar during the Hawks’ 75-63 win over the Lobos in the NRG Tournament consolation championship game on Jan. 4 at Ben Luján Gymnasium. 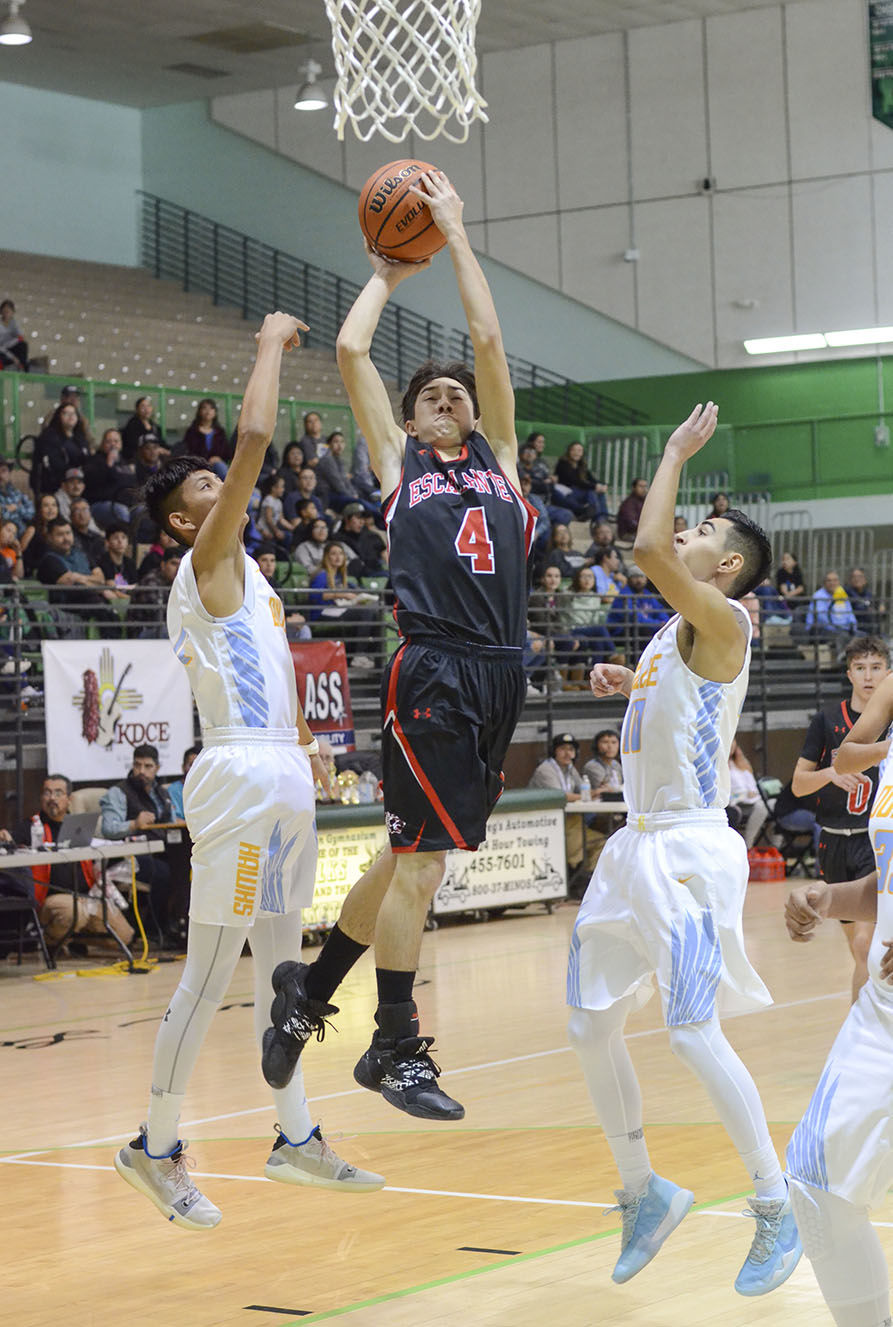 Escalante’s Isaac Archuleta flies in for a layup attempt against Dulce during the Hawks’ 75-63 win over the Lobos in the NRG Tournament consolation championship game on Jan. 4 at Ben Lujan Gymnasium.

Dulce’s Antonio Tellez scores on a reverse layup against Escalante during the Hawks’ 75-63 win over the Lobos in the NRG Tournament consolation championship game on Jan. 4 at Ben Luján Gymnasium.

Dulce’s Santiago Largo dribbles down the baseline while being guarded by Escalante’s Andres Salazar during the Hawks’ 75-63 win over the Lobos in the NRG Tournament consolation championship game on Jan. 4 at Ben Luján Gymnasium.

Escalante’s Isaac Archuleta flies in for a layup attempt against Dulce during the Hawks’ 75-63 win over the Lobos in the NRG Tournament consolation championship game on Jan. 4 at Ben Lujan Gymnasium.

With a chance to avenge themselves, the Dulce High School boys basketball team did so in grand style in their consolation championship matchup of the Northern Rio Grande Tournament against Escalante High School.

Energy and enthusiasm flashed from the players in Columbia and gold from the get-go, and the Hawks (5-6) got some revenge against the Lobos (5-6) by defeating Escalante 75-63 to claim fifth place on Jan. 4 at Pojoaque Valley High School’s Ben Luján Gymnasium.

The Lobos had won the first matchup of the season between the old rivals in a 69-66 fashion in overtime on Dec. 30 in Tierra Amarilla, and the result didn’t sit well in the stomach of Dulce junior guard Antonio Tellez and his teammates.

“We got pretty upset they won last time,” Tellez said. “We felt like we should have won, but we came out with better energy this game and ran the game plan better this time and listened to our coach.”

Tellez didn’t shy away from putting the ball through the net, as he led the Hawks with 20 points, doing a majority of his damage over the first three quarters where he scored 18 of those 20.

“We were just patient bringing up the ball and when we got the mismatch, we took it,” Tellez said. “We took the layups when we had them and did a good job kicking out to the open shooters.”

As a team, Dulce played its finest ball throughout the first half, something the Hawks have struggled to do consistently this season. They’ve been used to falling behind and having to fight uphill battles, but on this day, Dulce stormed to a 17-8 lead after a quarter and a 40-27 advantage a halftime.

The Hawks led by as many as 15 points in the second quarter, which was their highest scoring quarter with 23 points. Adriano Tsosie supplied 16 points on the afternoon, and 11 of those were produced in the second.

“Our mentality was to come out fast and start strong,” Dulce head coach Jesus Maes said. “We had to start off fast because we’ve used a lot of energy trying to dig ourselves out of holes in the second half and our shots end up falling short.”

Although presented with a 13-point halftime deficit, the Lobos didn’t go away quietly. After an equal third quarter where both squads scored 14-points apiece, Chris Luna and Dante Salazar did all they could do in attempt to turn the game around.

Luna began to hit his mark in the second half by scoring 10 points, and Salazar made his way to the rim, as he was awarded with eight free throws in the fourth quarter while making six.

Escalante would climb as close as 64-59 with three minutes remaining in the contest after a Luna 3 and a free throw following a 10-second call on Dulce in the back court.

That’s as close as they would cut the deficit, however, as the Hawks came right back with a quick 6-0 run to increase their lead back to 70-59 with 1:40 left after a layup by Tsosie. The run started with an acrobatic reverse layup by Zeke Castleberry in traffic and also featured another two points inside from big man Santiago Largo.

In the first meeting, Luna and Santiago Rivas burned Dulce for 19 and 20 points with six 3-pointers between them, so Maes was satisfied with how his new defensive gameplan of implementing a 3-2 defense worked to limit the Lobos’ deep shooting threats.

While Luna still scored 22 points, Rivas only produced 12 in the rematch and made just one 3-pointer.

“Those guys shot the lights out last time, so I figured we needed to go three guards out top and really only keep two guys on the bottom,” Maes said. “We had to play their shooters and give up the inside if we had to, but Santi and Antonio are two big guys underneath that can gobble up rebounds and do things right underneath, so we didn’t really feel we needed three guys to bang in the bottom.”