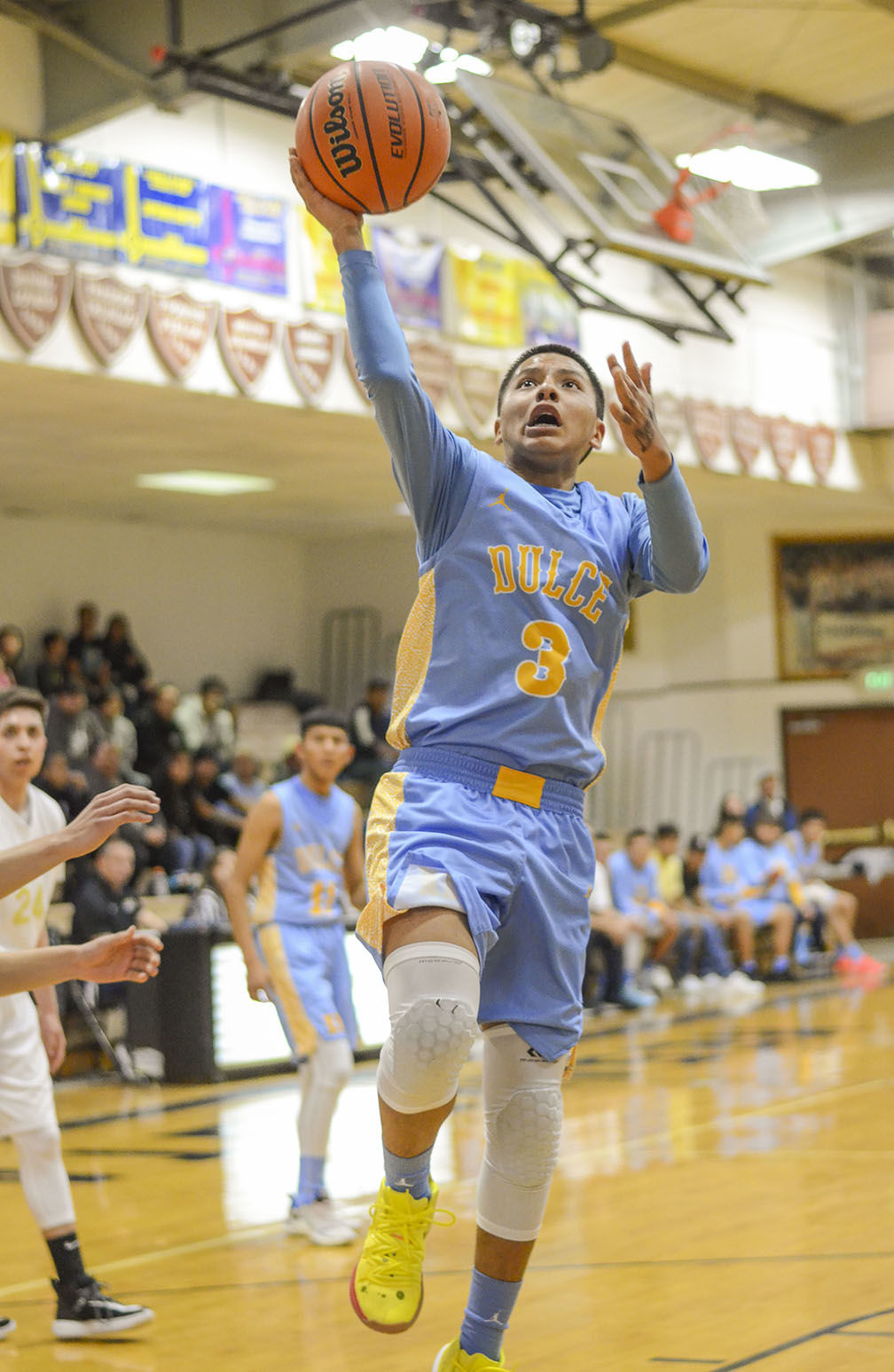 Dulce’s Devon Phone scores on a layup during the second quarter in the Hawks’ 89-68 win over Mesa Vista on Jan. 9 at Mesa Vista Gymnasium. 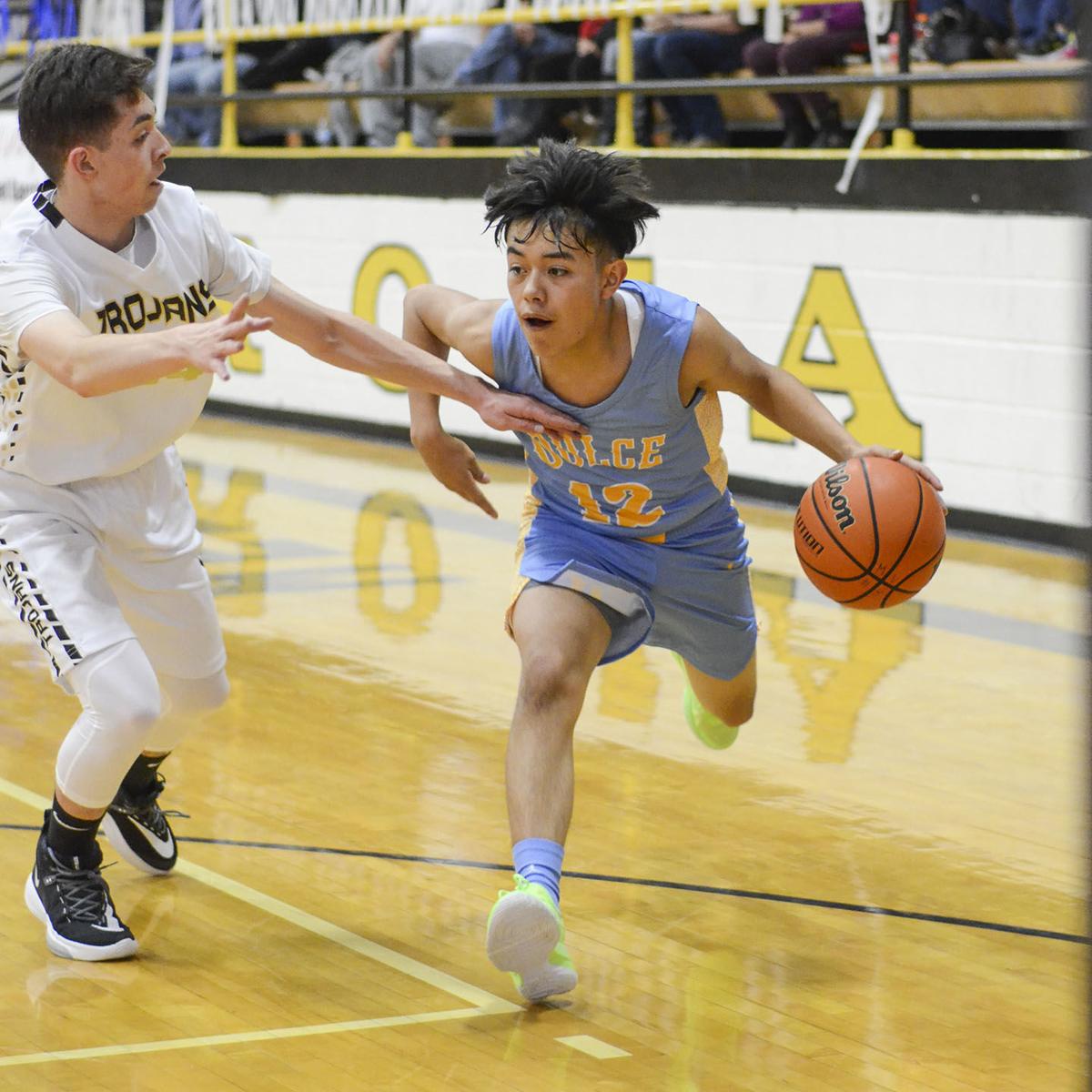 Dulce point guard Zeke Castleberry drives to the basket against Mesa Vista’s Ryan Garcia during the Hawks’ 89-68 win over the Trojans on Jan. 9 at Mesa Vista Gymnasium. 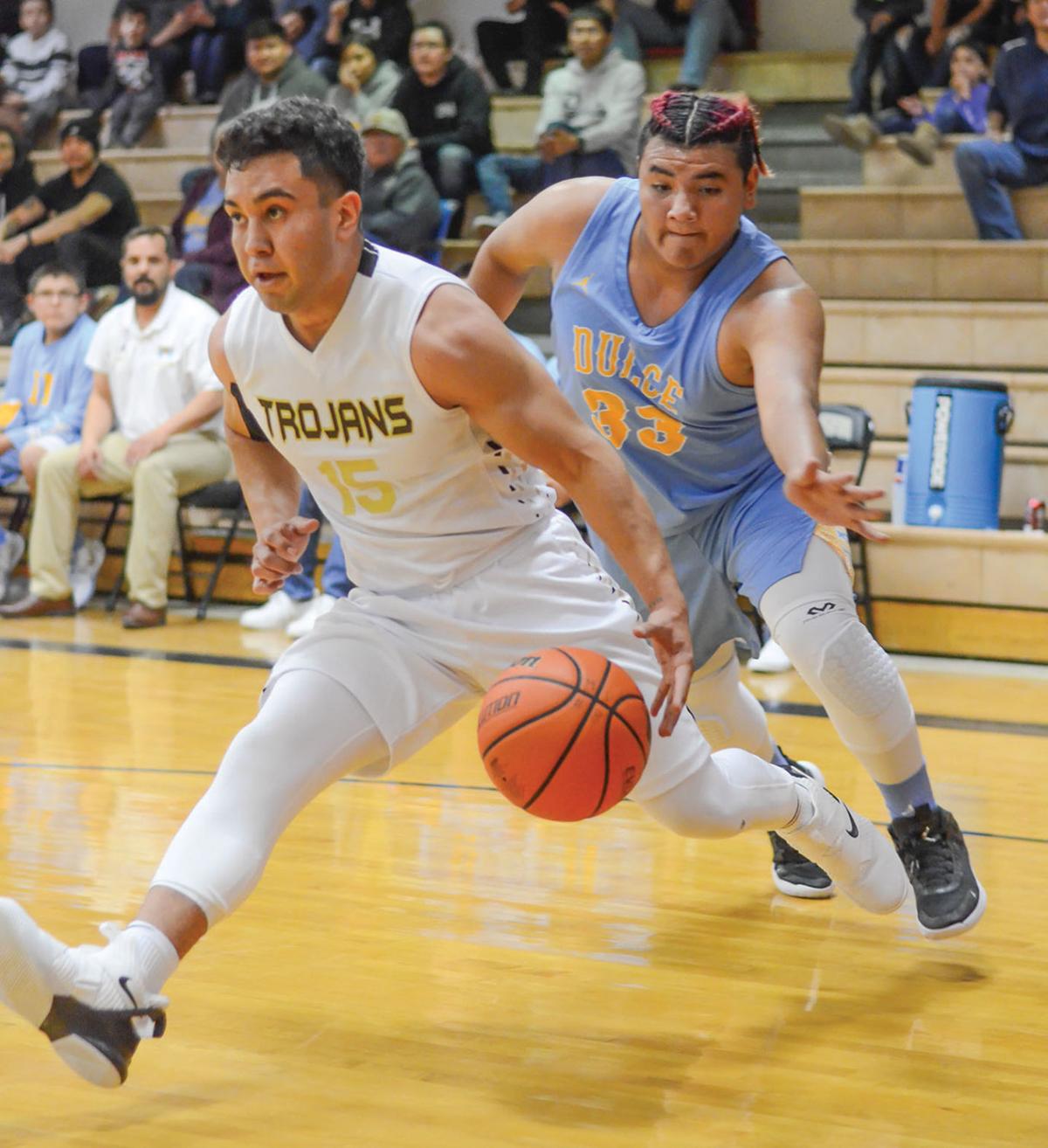 Mesa Vista's Logan Vigil drives to the basket past Dulce's Santiago Largo during the Hawks' 89-68 win over the Trojans on Jan. 9 at Mesa Vista Gymnasium.

Dulce’s Devon Phone scores on a layup during the second quarter in the Hawks’ 89-68 win over Mesa Vista on Jan. 9 at Mesa Vista Gymnasium.

Dulce point guard Zeke Castleberry drives to the basket against Mesa Vista’s Ryan Garcia during the Hawks’ 89-68 win over the Trojans on Jan. 9 at Mesa Vista Gymnasium.

Mesa Vista's Logan Vigil drives to the basket past Dulce's Santiago Largo during the Hawks' 89-68 win over the Trojans on Jan. 9 at Mesa Vista Gymnasium.

While there aren’t too many things in the world that go together quite like peanut butter and jelly or batman and robin, most hoops heads would agree there isn’t another combination quite like Michael Jordan and the game of basketball.

For the Dulce High School boys basketball team, receiving their new Columbia blue threads with the infamous jumpman logo of the Air Jordan Brand stitched into their jerseys made them not only look the part, but play the part as well.

The Hawks (6-6) traveled to Ojo Caliente for a non-district road game at Mesa Vista High School on Jan. 9, and Dulce — along with its new sleek uniforms — blew the doors off the Trojans (5-6) for a convincing 89-68 win inside Mesa Vista Gymnasium.

Dulce head coach Jesus Maes said he thought the brand-new jerseys gave his players a little extra spark in their shooting touch. Hard not to believe, as the Hawks sank a total of 12 3-pointers on the night.

“They were so excited about those,” Maes said. “They couldn’t wait to put them on and I think that helped us a lot and had a lot to do with our shooting.”

Hawks’ low post player Santiago Largo, like almost any high school teenage hooper, said the Jordan jerseys were an obvious choice when the team began looking at options during the fall, and his performance on the night stuck out among the Hawks.

Largo went to work inside with the consistent use of his drop-step to attack the basket and turnaround shots from inside the paint, as the sophomore totaled a team-high 25 points to lead Dulce.

He was able to score 17 of those in the second half, and his third quarter included 14 points and his lone 3-pointer of the night, which found its way through the net as the third quarter expired to extend Dulce’s lead to 71-41 entering the final eight minutes.

“We came out and said we would play hard and keep shooting even if we weren’t making them,” Largo said. “That’s what we said and we ended up shooting the lights out.”

While watching his teammates continue to sink shots from the perimeter, Largo said he wanted a little taste of the action from beyond the arc as well when he launched his 3-pointer at the end of the third.

“Yeah, I wanted to get involved,” he said. “I like to shoot too, but I know my strength is down low and with my drop-step.”

Dulce led by as many as 32 points in the second half (78-46) after a layup by Mekaylo Harrison with 5 minutes, 50 seconds remaining in the game, and the Hawks wet touch from the outside helped them build a 24-10 lead after a quarter of play and a 45-24 advantage at halftime.

Of the seven 3-pointers made in the first half, Devon Phone was responsible for four, and he scored all 14 of his points over the first two quarters. Antonio Tellez added 19 points for Dulce, while Deandre Gonzales scored 10 and point guard Zeke Castleberry had eight.

Largo’s 14 points in the third quarter helped Dulce reach an output of 26 points, it’s largest scoring quarter of the game, and the Hawks reached at least 20 points in each quarter before totaling 18 in the fourth.

“It makes my job a lot easier when we can shoot like that,” Maes said. “We had a game like that against Mora where I think we scored 25 points in the second quarter and opened the game up and we were on. In that game, they (Mora) asked me if we practice in the dark, because we shoot the lights out. We have shooters and that is our strength and we live and die by the 3; that can hurt us when we’re off, but when we’re on, we can beat anybody by 20.”

Being loaded with shooters is certainly a strength for the Hawks, but their 3-2 zone defense and press have become part of their identity.

After seeing success limiting Escalante High School’s shooters in the consolation championship of the Northern Rio Grande Tournament, Dulce held Mesa Vista to 17 points-or-less in each of the first three quarters and limited the Trojans’ Damian Trujillo for as long as they possibly could.

Trujillo would finish with a game-high 25 points, but he had just two after the first quarter and 10 by halftime. Alejandro Trujillo was Mesa Vista’s second-leading scorer with 13 points and Ryan Garcia added eight.

“I still like our full-court press and the three guys up top have length, long arms and they play with a defensive mentality to create havoc,” Maes said. “The guys down low are getting steal after steal because they’re able to pinch off long passes or high passes that are floating because they guys up top are using their hands and length. It’s all by design — putting our best three defenders up top and let them create havoc.”