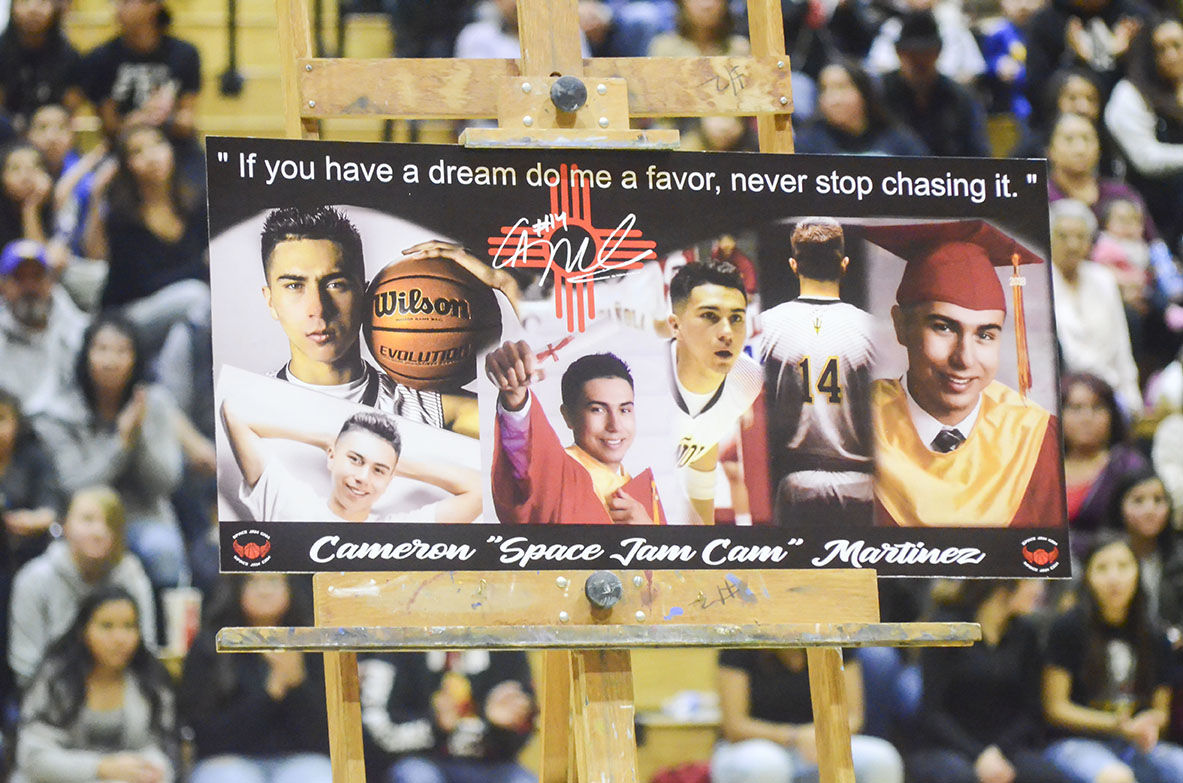 This commemorative poster of Cameron Martinez, to be displayed in the foyer of Edward Medina Gymnasium, was unveiled by Española School District Superintendent Bobbie Gutierrez and Española School Board President Ruben Archuleta’s son, Luke Archuleta, during the ceremony held before the Sundevils’ game against Gallup Jan. 10 at Edward Medina Gymnasium. 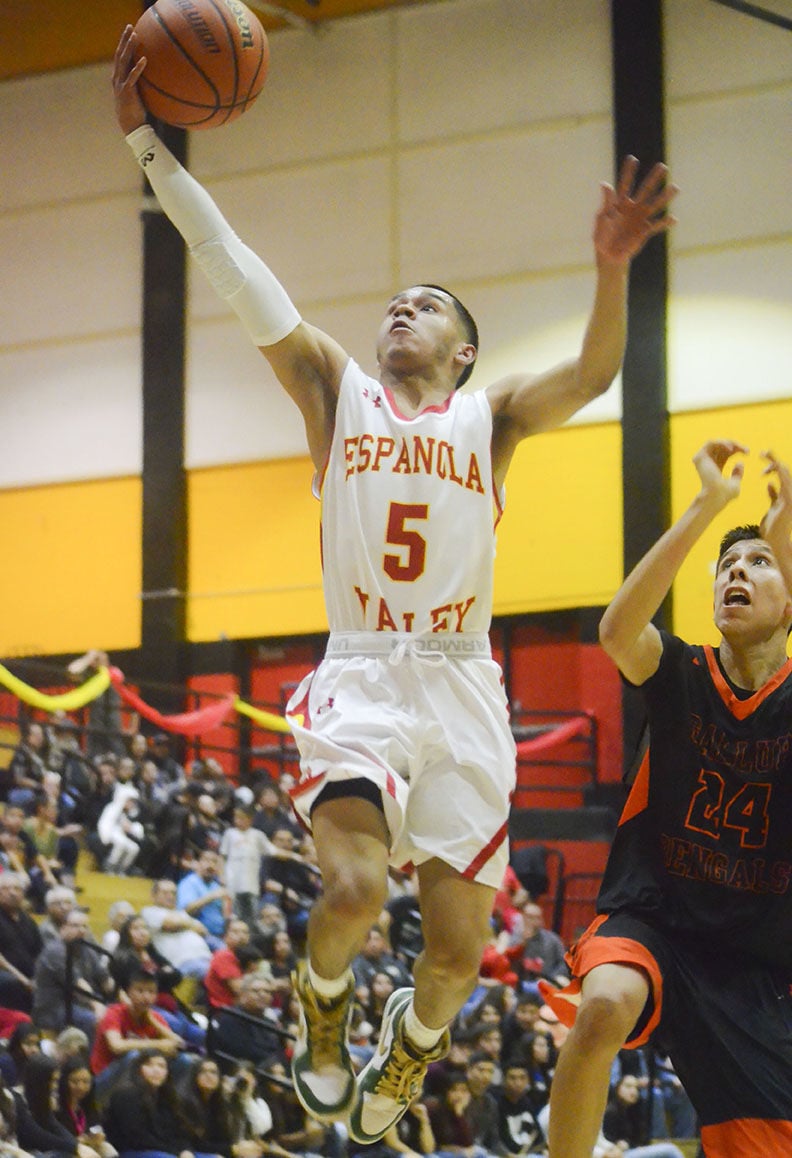 Española guard Luis Molina attempts a layup in the first half of the Sundevils 78-77 last-second loss to No. 2 Gallup Jan. 10 at Edward Medina Gymnasium. 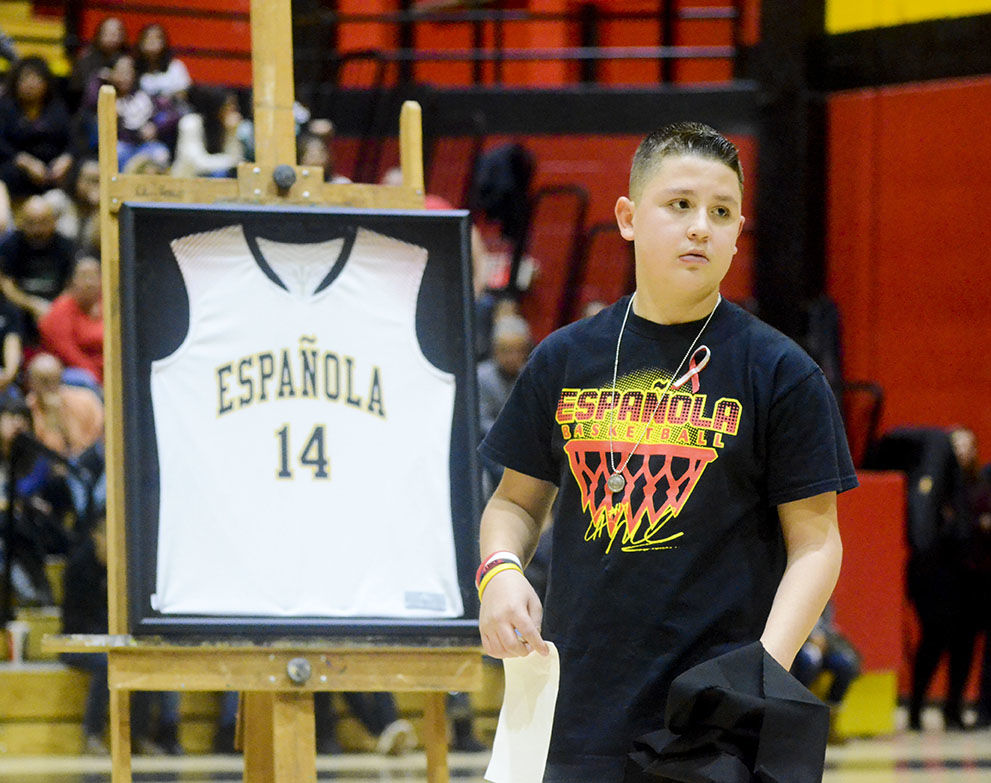 Luke Archuleta, son of Española School District Board President Ruben Archuleta, ended Cameron Martinez's pregame ceremonial with a speech and unveiling of the retired jersey and commemorative poster, both to be displayed in the foyer of Edward Medina Gymnasium.

This commemorative poster of Cameron Martinez, to be displayed in the foyer of Edward Medina Gymnasium, was unveiled by Española School District Superintendent Bobbie Gutierrez and Española School Board President Ruben Archuleta’s son, Luke Archuleta, during the ceremony held before the Sundevils’ game against Gallup Jan. 10 at Edward Medina Gymnasium.

Española guard Luis Molina attempts a layup in the first half of the Sundevils 78-77 last-second loss to No. 2 Gallup Jan. 10 at Edward Medina Gymnasium.

Luke Archuleta, son of Española School District Board President Ruben Archuleta, ended Cameron Martinez's pregame ceremonial with a speech and unveiling of the retired jersey and commemorative poster, both to be displayed in the foyer of Edward Medina Gymnasium.

It was a night that was about so much more than basketball, but the basketball ended up being pretty darn entertaining down the stretch.

It only seemed fitting — that on the night the Española Valley High School boys basketball team held a pregame ceremony to retire the No. 14 jersey of the late Cameron Martinez — the Sundevils would make him proud and come up with a strong performance to take down Class 4A’s No. 2 ranked Gallup High School during Española ’s home opener Jan. 10 at Edward Medina Gymnasium.

The Sundevils (8-7) were 8.3 seconds away from just that, but the finishing touches on an emotional night were thrown out the window by Isaac Bustinza, who sunk a game-winning 3-point shot at the buzzer from the right wing to give the Bengals (9-4) a 78-77 win to escape back to Gallup, 231 miles through the night.

Bustinza knocked down two 3-pointers on Gallup’s last two possessions in the final 17 seconds to help the Bengals prevail. Prior, he had scored just one other basket, which also happened to be a 3-pointer, back in the second quarter.

In the last 59 seconds, Española had two of their best free shooters in Brian Martinez and Ryan Trujillo at the free throw line a combined six times, but the pair only converted on three attempts, leaving the door open for the Bengals to pounce.

“Free throws bro, that’s the bottom line,” Española head coach James Branch said. “I had Brian and Ryan there at the line at the end and they miss three free throws. We put ourselves in the predicament and the guy hit the shot. We had a guy out there closing out and so, if he misses, we win the game.”

Overall, Española was 6-of-11 from the charity stripe in the fourth quarter and a dismal 18-of-33 for the game. Trujillo was the Sundevils’ most aggressive driver of the basketball and he had no issues getting himself to the line, but the senior shot only 52 percent by making 9-of-17 attempts.

Combine the free throw shooting woes and the Bengals’ pursuit on the glass, and you have the two deciding factors. Gallup hauled in 25 offensive rebounds for the game, which more than made up for their 28-of-81 shooting mark from the field that included countless misses from inside the paint.

“There was just a couple balls that didn’t bounce our way and that happens sometimes,” Branch said. “I can say boxing out (was a problem at times) but if we make free throws were not even talking about boxing out. There’s not a discussion about anything. Just make a damn free throw.”

The Bengals took a 39-32 halftime lead, which was more than OK with Branch based on his team’s performance in the first half, which included a shooting effort of 11-of-28 from the field, seven turnovers and 8-of-14 shooting from the line.

“That was weird,” Branch said about only being down by seven points. “I don’t even know how we did that, seriously. We talked about it: we were down seven points and the way we played that first half was like, ‘Wow, really?’ We did a lot of things that hurt ourselves and we stayed with it and it was a hell of a game and a hell of a comeback. It looked like they were just going to kick our butts there for a little while and run away with it.”

Española would march its way back in the second half, but their run was quickly, temporally put on hold as Gallup’s Seth Manuelito hit a 3-pointer just six seconds into the third quarter to push the Bengals’ lead to 10, at 42-32.

It wouldn’t be until with 1:18 left in the third quarter that the Sundevils regained the lead, 54-52, their first such since ahead 3-2. They took a 56-54 advantage into the fourth quarter, but were outscored 24-21 by the Bengals in the final eight minutes.

Trujillo had a game-high 19 points for Española, Gallup’s Quinn Atazhoon recorded a team-high 17, Manuelito finished with 13 and Tyrell Begay added 11. Atazhoon and Begay combined for 14 of the Bengals’ 24 points in the fourth quarter.

Branch was optimistic after the game, showing no signs of anger or disappointment after taking the second-ranked team down to the wire. Although, he did say ‘this loss stung more than any I could remember.’” He tried to keep the entire night’s situation in perspective.

“I think a lot of emotions played into our game tonight, I’m going to be honest with you,” he said. “The ceremony was 45 minutes, then the pressure to go win it? That’s tough, think about it.”

Cameron Martinez, a 2018 graduate, was killed in a shooting Oct. 4, 2018 in Ohkay Owingeh. His ceremony and jersey retirement were the idea of Española School District Board President Ruben Archuleta’s son, Luke Archuleta.

Luke, a seventh-grade student at Española Middle School — who developed a friendship and mentorship with Cameron Martinez — created his own PowerPoint and presented his visions and idea to the Board during a Nov. 14, 2018 meeting and the Board unanimously approved the ceremony.

Luke Archuleta helped Española Superintendent Bobbie Gutierrez unveil the retired jersey and a commemorative poster of Cameron Martinez to be displayed in the foyer outside the gymnasium. During his speech, Luke Archuleta had trouble holding back tears, but he came up with a sound off that anyone present probably had a hard time arguing, especially on this night.

Enjoy reading the SUN online? Then you'll love the print version. This is just one of the 28 local news, opinion, arts and sports stories published in the Jan. 17, 2018 edition. To see the rest, buy a copy from one of our vendors on the street or at one of these locations.

This letter is to one of the E-911 dispatchers who received a call on Oct. 4, hours before the tragic shooting that took place later that e…