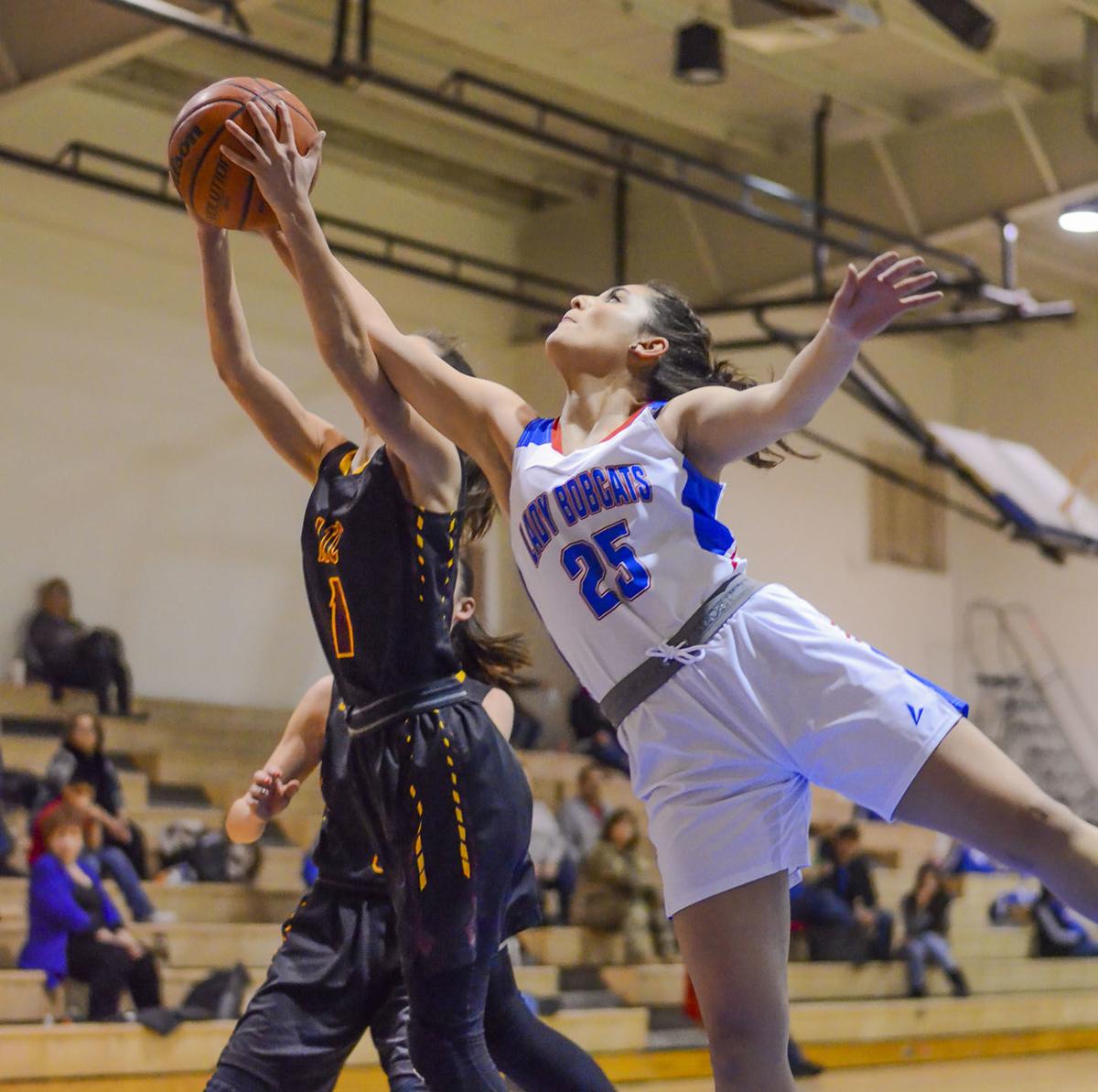 McCurdy’s Devyn Cordova (right) fights for an offensive rebound near the baseline against ATC during the Lady Bobcats’ 48-41 win over the Lady Phoenix on Feb. 5 at Memorial Gymnasium. 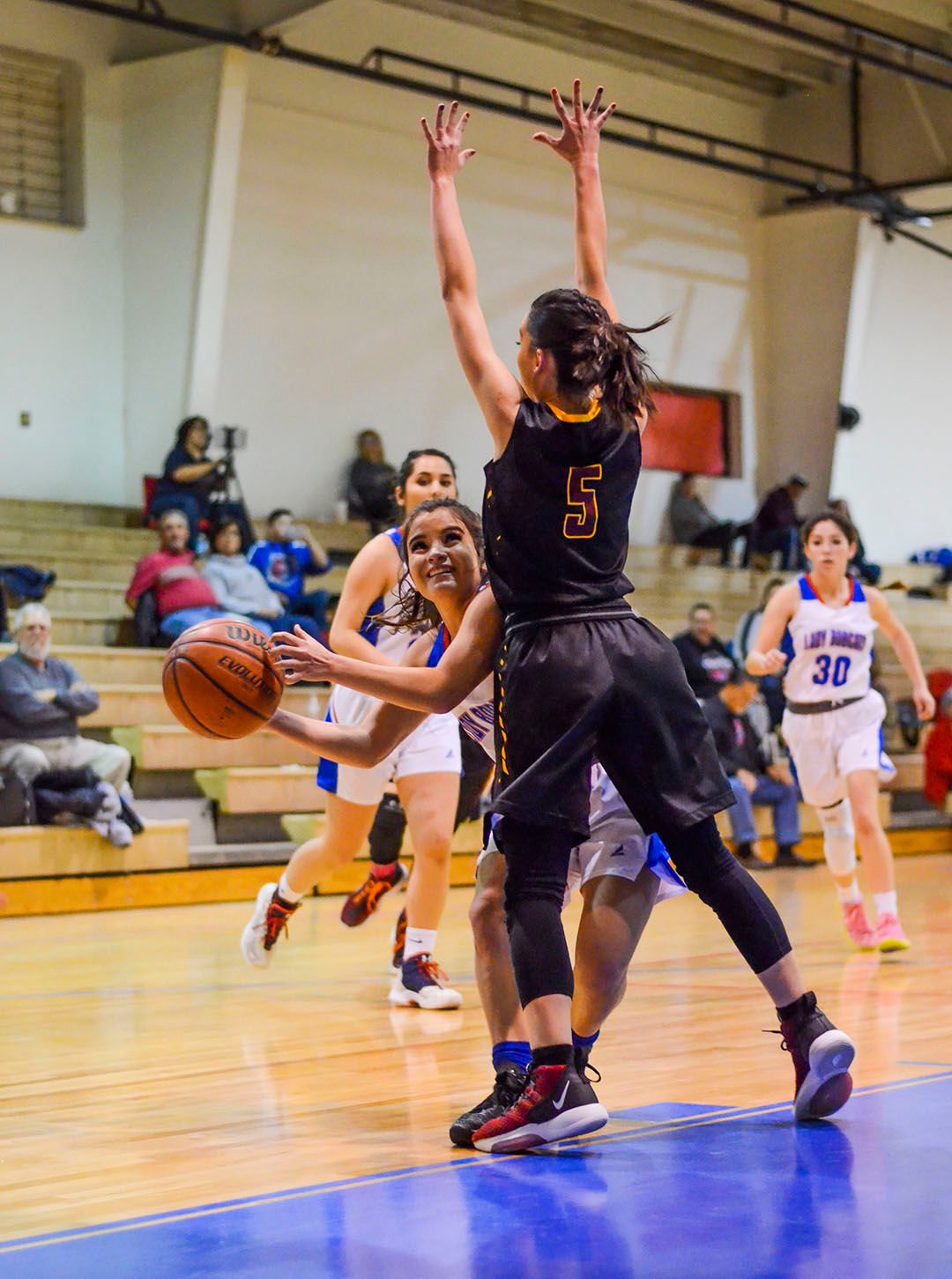 McCurdy point guard Jayme Bustos tries to make a move in the post against ATC’s Chanelle Jaeger during the Lady Bobcats’ 48-41 win over the Lady Phoenix on Feb. 5 at Memorial Gymnasium. 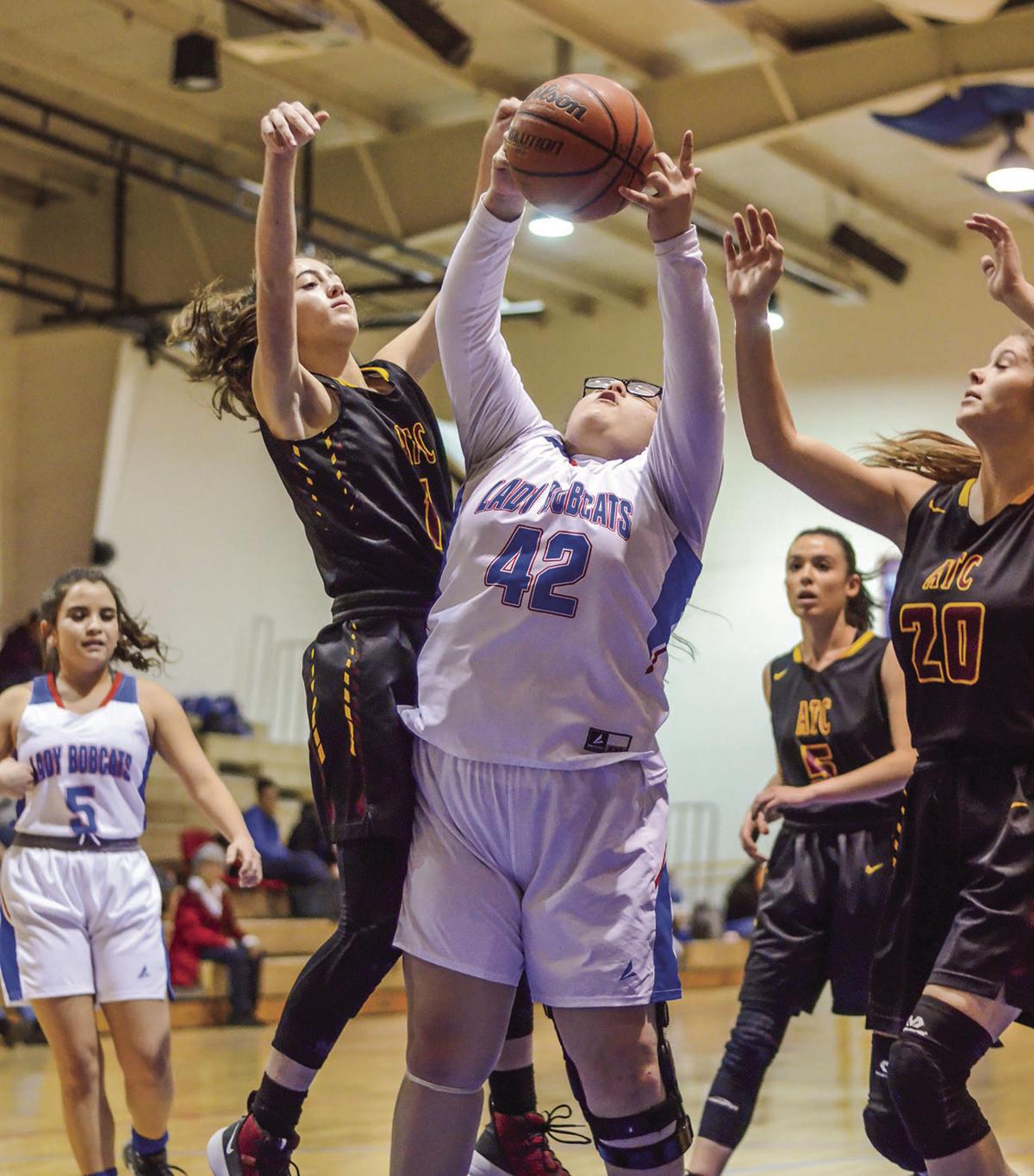 McCurdy’s Haylee Valdez secures an offensive rebound against ATC during the Lady Bobcats’ 48-41 win over the Lady Phoenix on Feb. 5 at Memorial Gymnasium.

McCurdy’s Devyn Cordova (right) fights for an offensive rebound near the baseline against ATC during the Lady Bobcats’ 48-41 win over the Lady Phoenix on Feb. 5 at Memorial Gymnasium.

McCurdy point guard Jayme Bustos tries to make a move in the post against ATC’s Chanelle Jaeger during the Lady Bobcats’ 48-41 win over the Lady Phoenix on Feb. 5 at Memorial Gymnasium.

McCurdy’s Haylee Valdez secures an offensive rebound against ATC during the Lady Bobcats’ 48-41 win over the Lady Phoenix on Feb. 5 at Memorial Gymnasium.

There could have been a wave of panic, but the McCurdy Charter School girls basketball team understands the difference between the first and second half of the season — specifically how to learn from the first to improve in the second.

With that second half of the season now well underway, the Lady Bobcats (9-12) have ascended to the top of the District 2-2A standings and are now looking like the team to beat.

Three games into the District slate, McCurdy has jumped out to a 3-0 start with wins over Academy for the Technology and the Classics, Desert Academy/Santa Fe Waldorf and Tierra Encantada Charter School after finishing the non-District portion of the season at 6-12.

McCurdy’s most recent win came in a blistering 53-5 fashion over the Lady Alacranes on Monday at Memorial Gymnasium, but the biggest statement win was the District-opener on Feb. 5, where the Lady Bobcats played as the dominant team for three quarters to down the Ron Drake led Lady Phoenix 48-41 at home.

McCurdy produced its largest separation in the third quarter, as the Lady Bobcats nailed four of their first five shots from the floor to answer ATC’s quarter-opening bucket with an 8-0 run. Megan Archuleta’s 15-footer with 6 minutes remaining in the third was the final bucket of the run, which forced a timeout by Drake in attempt to coral his team.

The Lady Bobcats led by as many as 21 points and ended the quarter shooting 60 percent from the floor (6-of-10). They outscored the Lady Phoenix 19-10 to gather a 41-21 advantage with one quarter remaining.

“We started both halves off strong and we have to respect ATC and coach Drake because he knows what he’s doing,” McCurdy head coach Lucretia Williams said. “Now that we know what to expect (from ATC), now hopefully it will be easier for the girls to process that and help get them going offensively and to contain consistently on defense.”

Drake — the winningest girls basketball coach in New Mexico high school history — has been used to stellar play from his teams over the years.

He led Pecos High School to the Class 2A state championship in 2019 and guided the Lady Panthers to a 109-35 record over five seasons; his last team he coached at Española Valley High School was the 2011-12 Lady Sundevils, who finished that season 30-4.

At ATC, it’s about starting over and rebuilding, and that was evident from the Lady Phoenix’s play over the first three quarters against McCurdy. ATC was a combined 10-of-34 from the field over the first 32 minutes before finally shooting a more than respectable 9-of-16 in the fourth, a quarter where they outscored McCurdy 20-7.

“I tell people we are Dr. Jekyll and Mr. Hyde,” Drake said. “We play some good quarters and we play some bad quarters; we still need to put it all together. It’s tough when you’re playing three eighth-graders, a ninth-grader and a junior. It’s hard to change the culture overnight, so this is a growing year.”

The youth of the Lady Phoenix showed itself against the Lady Bobcats 1-3-1 3/4 court press defense, as McCurdy was consistent in forcing turnovers in the first half as it built a 16-4 advantage after a quarter and a 22-9 lead at the break.

“Defensively, we have made leaps and bounds as far as improvement,” Williams said. “We have a very athletic team and we’ve learned to hustle and play tough based on the very tough schedule we’ve had the last month playing teams like Pecos and Peñasco. Playing those teams and learning from that has put us in a better mind state defensively.”

Emma Lovato had the hot hand for McCurdy, recording a game-high 16 points with two 3-pointers and a 4-of-5 mark from the free throw line. Point guard Jayme Bustos also played a sound game overall, as she shot 6-of-9 from the floor for 13 points. Devyn Cordova played a heavy presence inside by recording eight rebounds and seven points, in which many of those came after securing offensive rebounds near the basket.

While McCurdy has marched to a 3-0 start in District, ATC was 10-8 overall and 2-1 in District as of press time. The 10th win of the season, which came over Monte Del Sol Charter School on Feb. 8, marked a new season record for the program after nine wins in one season was the previous record.

McCurdy and ATC are scheduled to play the final District game of the season on Feb. 22 in Santa Fe, where heavy state tournament implications could be up for grabs.

“We can’t wait to play them again on the 22 at home,” Drake said. “Unfortunately, in our District, only one of us is going to go to state.”