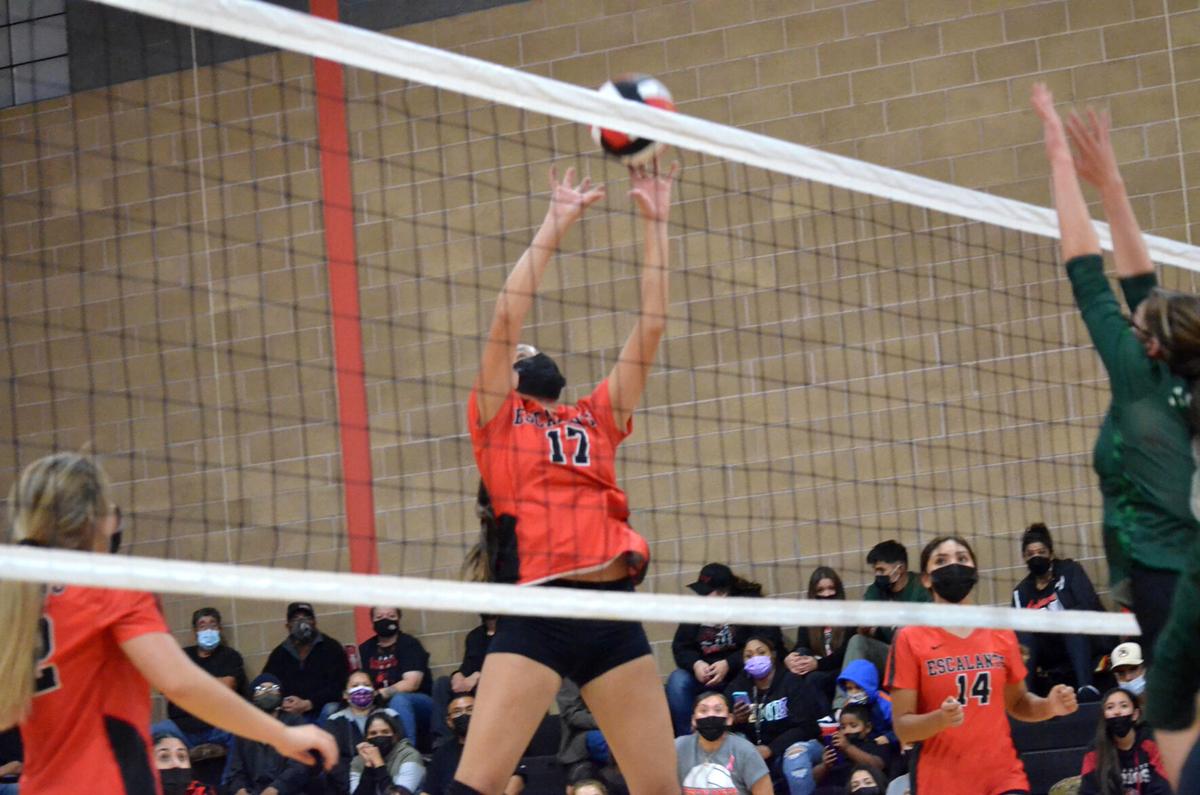 Lady Lobos junior Brycelyn Martinez (17) attacks a ball at the net. Martinez had 10 kills in the match, and her service game, including four aces, gave Escalante early momentum in their win over Cloudcroft. 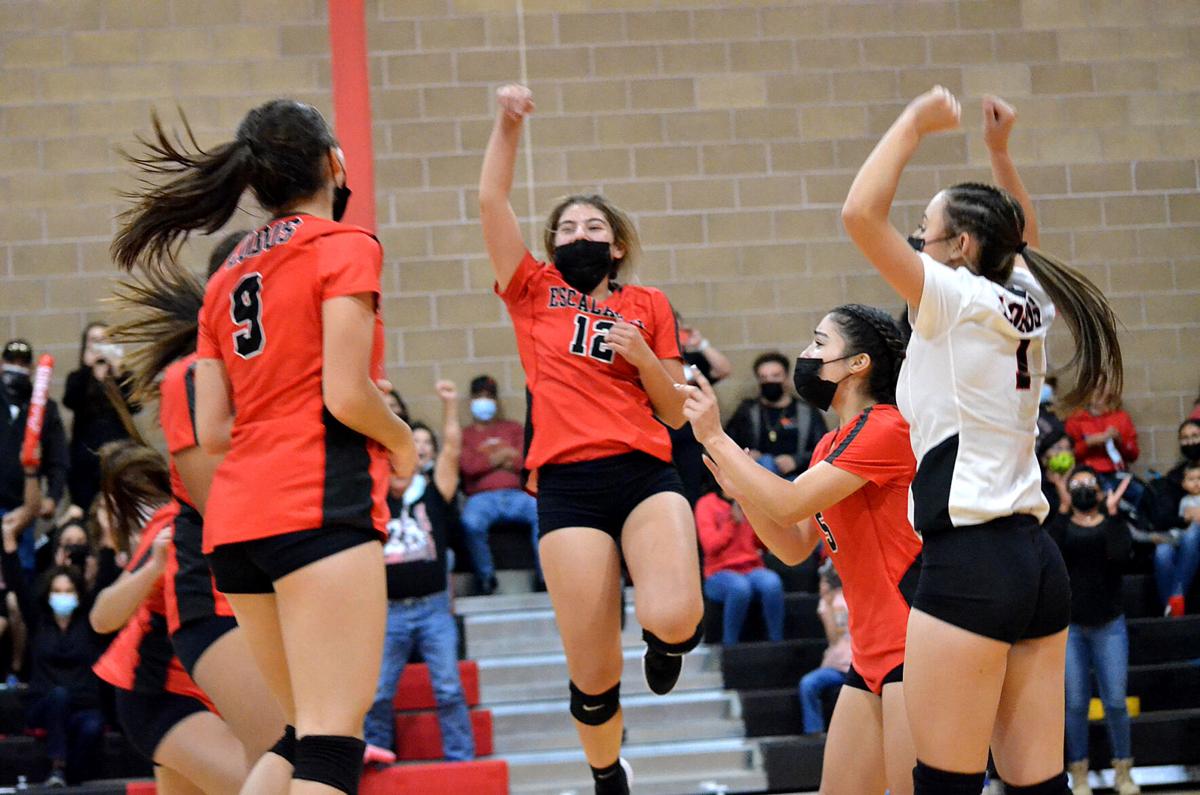 Escalante High School junior Emma Mestas (12) and other team members celebrate a winning point late in their state tournament play-in win over Cloudcroft. Big celebrations were common for the Lady Lobos, and they consistently fed off the energy of the crowd. 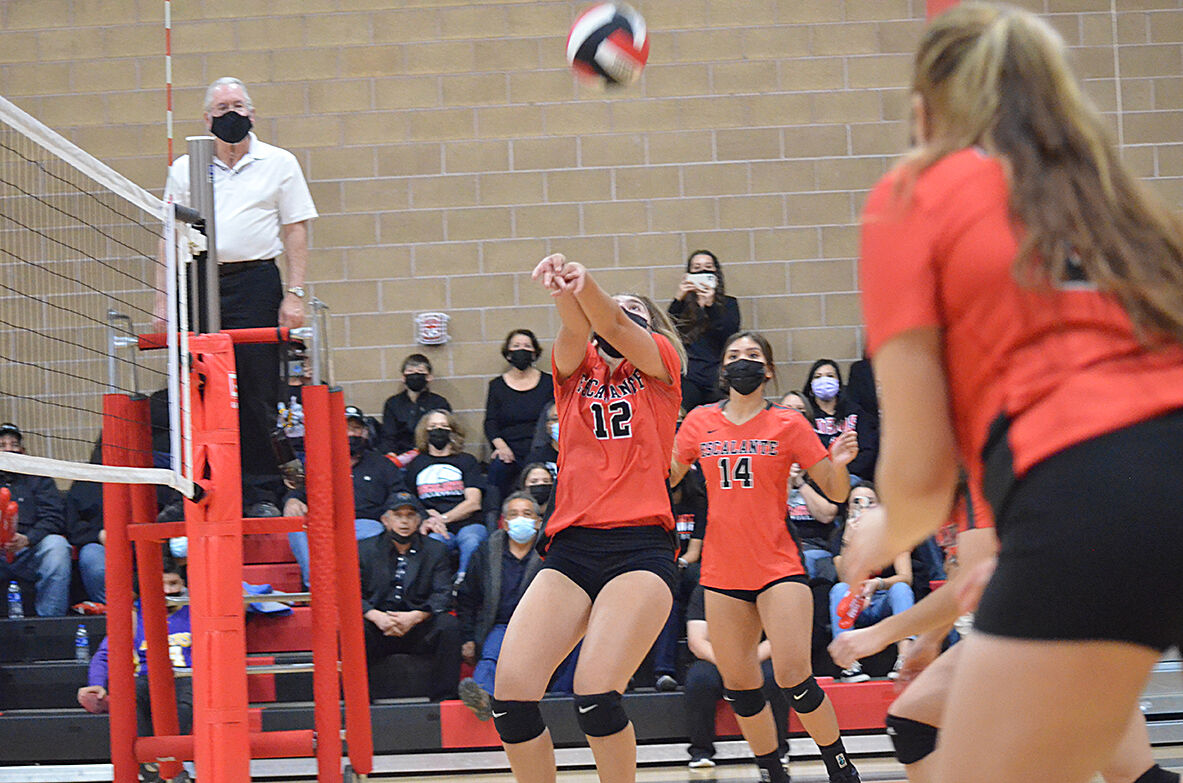 Escalante High School junior Emma Maestas (12) bump-sets for an attack during the state tournament win over Cloudcroft. Maestas kept the offense in system with 24 assists and four kills in the match. Escalante advances to take on No. 3 Laguna-Acoma in the first double-elimination round.

Lady Lobos junior Brycelyn Martinez (17) attacks a ball at the net. Martinez had 10 kills in the match, and her service game, including four aces, gave Escalante early momentum in their win over Cloudcroft.

Escalante High School junior Emma Mestas (12) and other team members celebrate a winning point late in their state tournament play-in win over Cloudcroft. Big celebrations were common for the Lady Lobos, and they consistently fed off the energy of the crowd.

Escalante High School junior Emma Maestas (12) bump-sets for an attack during the state tournament win over Cloudcroft. Maestas kept the offense in system with 24 assists and four kills in the match. Escalante advances to take on No. 3 Laguna-Acoma in the first double-elimination round.

Escalante High School volleyball coach Kathleen Salazar-Valdez was not thrilled when her team was given the No. 6 seed in the state tournament.

In the new format for 2021, the top four teams (Tularosa, Texico, Laguna-Acoma and Santa Rosa in 2A) all get a bye through the first round straight into the double elimination part of the tournament. The other eight teams need to win a single play-in match with their season on the line.

“I was not happy with that,” Salazar-Valdez said. “I don’t know how they judged, and how they rank. I don’t know what was in their mindframe when all that happened.”

The only losses during the year came to a high-ranked 3A team, a strong 4A opponent, and a Colorado team, all in the first month of the season. With a 13-match win streak to end the year, they certainly seemed to have the record of a top team.

But they were ranked behind five teams all with worse regular-season records, though arguably with stronger strength of schedules.

“I was a little disappointed,” Salazar-Valdez said.

The Lady Lobos will have a chance to prove the state wrong in their seeding, earning their opportunity to play the top teams at the state tournament.

Escalante had to fight through five sets Tuesday with Cloudcroft to come away with the win in their first-round match and continue their season. And it represented the first win in a state tournament game in any sport for Escalante since 2017, when the current crop of seniors were still in middle school.

In a back-and-forth match, with every set decided by large margins but in both directions.

“I was really nervous for today,” said junior setter Emma Maestas. “But I just played my game, tried to help my teammates, uplift them so that we could get the win.”

The thunder sticks given to fans were in full force, and it was about as loud as the gymnasium could get. That home court gave the Lady Lobos the advantage while their opponents had to make the 325-mile trip.

“They got us really motivated,” Maestas said.

After tough stretches, their energy inspired the Lobos to bounce back for the win.

Then there were lucky breaks at key points, like a ball saved by hitting a ceiling light post and bouncing back into play, or a mishit on the other side of the court hitting the chest of a Cloudcroft player who was backing away.

As a result, they had to face Cloudcroft in a play-in match. The No. 11 seed had a 13-11 regular season, but showed how dangerous they could be by ending their season with a victory over top-seeded Tularosa.

The first set was all Escalante from the very beginning. Brycelyn Martinez served a 7-0 run to give Escalante an 8-1 lead early. The gym hit likely peak volume after Martinez’s back-to-back aces forced a timeout, and they carried that momentum easily through the set to win 25-15.

The second set, though, turned the momentum back around. Cloudcroft found weak spots in the Lobos’ defense with their serves, and cut down on their errors from the first set as they pulled away for a 25-15 win to even the set.

During both sets when Escalante fell behind, Salazar-Valdez was slow to use timeouts. Both times she only used one of the two despite long runs in the opposite direction. She said that she does not want to huddle the team only to have negativity continue to spiral.

But Escalante easily regrouped in the third set. From going down 3-1, they took a 10-2 run to build a big lead early, then finished it off with an 11-1 run including seven straight points to take the set 25-10 and regain the lead.

In the fourth set, though, that momentum was lost. The Lady Bears forced Escalante out of system consistently and they struggled to respond. Their service game struggled, and after taking a 3-1 lead early in the fourth set, they did not win a point on serve until halfway through the fifth set as they dropped 25-13 in the fourth set. Salazar-Valdez said the communication broke down in both of the sets they lost.

But in the final set, after falling behind 7-5, the Lobos finally came out of the rut on the serve of libero Sherydan Salazar for five straight points. Then Maestas closed out the match on a 5-0 run, giving Escalante a 15-9 victory in the tiebreaker.

“Come that fifth game, they showed a lot of heart,” Salazar-Valdez said.

Maestas had 24 assists in the match as she led the Escalante offense and fed their hitters. Kalese Torrez was the team leader with 11 kills and three aces, while Martinez was close behind with 10 kills and four aces, and Reina Terrazas had nine kills. The Lady Lobos also combined for seven blocks.

“We’re not done yet,” Maestas said. “We still have to fight.”