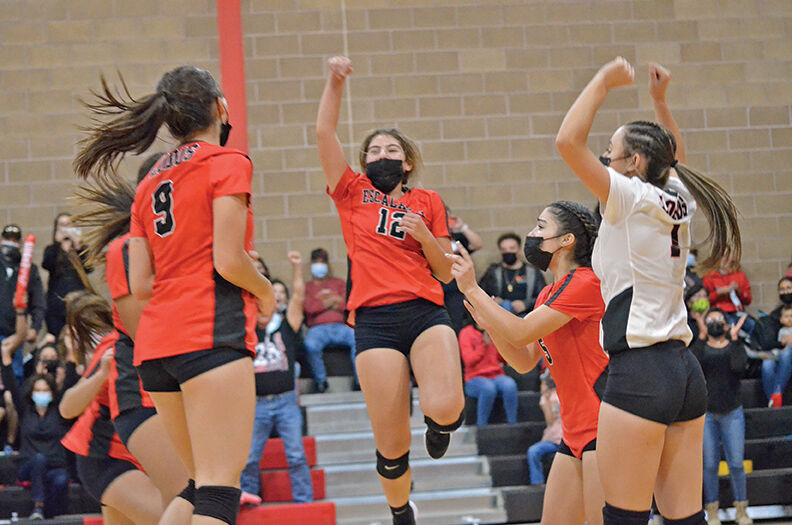 The Escalante High School volleyball team celebrates a point in their Nov. 9 first-round home win over Cloudcroft in five sets, advancing to play in Rio Rancho. 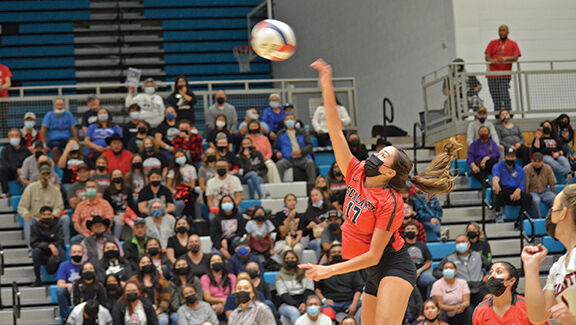 Escalante High School's Brycelyn Martinez (17) attacks a ball during the Lady Lobos' loss to Laguna-Acoma at Cleveland High School. Martinez is part of the team's talented junior class that will have to step up next year after a strong senior class graduates.

The Escalante High School volleyball team celebrates a point in their Nov. 9 first-round home win over Cloudcroft in five sets, advancing to play in Rio Rancho.

Escalante High School's Brycelyn Martinez (17) attacks a ball during the Lady Lobos' loss to Laguna-Acoma at Cleveland High School. Martinez is part of the team's talented junior class that will have to step up next year after a strong senior class graduates.

The Escalante High School volleyball team’s match against Capitan was about as thrilling as possible from the very first point.

Both teams had one win and one loss the day before, and their Nov. 13 match would give the winner a spot in the state semifinal. With elimination on the line, every point filled the air with tension for over two hours at the Rio Rancho High School gymnasium.

The Lady Lobos took a 3-0 lead in the first set, and grabbed a 21-16 lead late in the set. But a long run by the Lady Tigers evened the set, and eventually as both teams battled back and forth, Capitan wound up on top 29-27.

Set two started with a demoralizing 7-0 run by Capitan, and they led by as many as 10 points late in the set. But the Lobos were determined to battle back, and nearly came all the way back, but a poorly-timed service error ended the set at 25-22 the way of the Tigers, putting Escalante on the brink of elimination.

And an early 5-1 deficit in the third set threatened to end Escalante’s hopes just as quickly, but the Lobos battled back to take a lead. Up 21-17, Escalante then gave up seven straight points putting them on the brink of elimination. But they came back on a miraculous service run by setter Emma Maestas, whose 33 assists in that match and 120 over the week made every point count, and took the set at 28-26.

Set four, yet again, was just as close. Capitan took an early lead but not for long. Escalante rallied to go up 20-13 and 22-16 before the Tigers tied the set yet again, forcing Escalante to claw back and win the set 25-23.

But after over 150 points on the morning after five sets the night before, the wheels finally came off for the Lady Lobos, and try as they could, the Lady Tigers took the fifth set and the match at 15-7.

Along with the junior Maestas, Escalante’s senior hitters were as strong as ever, with Reina Terrazas at 17 kills in the match and 13 for Kalese Torrez, but fell just short of advancing.

The Escalante Lady Lobos fought every step of the way through the state tournament, winning two matches and coming just a few points away from a semifinal berth while playing matches in four different locations, three (and 14 sets) within a single 20-hour span. After not playing at all in the 2020-21 season, their 20-win year under a new head coach was impressive and a thrill to players and fans.

“It’s exciting,” said libero Sherydan Salazar. “This is the first year we’ve been down here.”

Escalante coach Kathleen Salazar-Valdez declined an interview after any of the weekend matches in Rio Rancho.

The week started for No. 6 Escalante on Nov. 9 in their first-round match at home against Cloudcroft.

In the new format for 2021, the top four teams (Tularosa, Texico, Laguna-Acoma and Santa Rosa in 2A) all get a bye through the first round straight into the double-elimination part of the tournament, in Rio Rancho on Nov. 12 and 13. The other eight teams needed to win a single play-in match with their season on the line to get there.

The Lady Lobos looked dominant in both a 25-15 first set and a 25-10 third set. But in between, they struggled with poor communication and passing and dropped sets two and four. But they rallied for a 15-9 first set, finishing the match on a 10-2 run to pull out the win and advance. Ten total aces by the team were key in winning the match and advancing to Rio Rancho as they were buoyed by a strong home crowd.

“They got us really motivated,” Maestas said after the match. “I was really nervous for today. But I just played my game, tried to help my teammates, uplift them so we could get the win.”

Coach Kathleen Salazar-Valdez was not thrilled when her team was given the No. 6 seed in the state tournament.

“I was not happy with that,” Salazar-Valdez said after the Cloudcroft match. “I don’t know how they judged, and how they rank. I don’t know what was in their mindframe when all that happened.”

The Lobos were 19-3 in the regular season, undefeated in district play (and 27-1 in sets), and likely would have won 20 regular season games had McCurdy not had to cancel the end of their season (the first matchup of those two teams went 25-17, 25-9, 25-8). With a 13-match win streak to end the year, they certainly seemed to have the record of a top team.

But they were ranked behind five teams all with worse regular-season records, though arguably with stronger strength of schedules.

“I was a little disappointed,” Salazar-Valdez said.

As a result of that seeding, Escalante’s first match in the double-elimination rounds came against the No. 3 seed, Laguna-Acoma, rather than a lower-seeded team. The Hawks would ultimately go on to win the state championship.

Playing at Cleveland High School, Escalante had a slow start against Laguna-Acoma’s strong defense and powerful hitters. They gave up multiple long service runs while dropping the first two sets 25-14 and 25-15.

After going up early in the fourth set, though, Escalante fell behind after a long service run for the Hawks led to a 25-15 win to take that set and the match, sending the Lady Lobos to the “Contender Bracket.” Torrez’s 14 kills were not enough for Escalante in the match.

That squared Escalante off with No. 7 Tatum in what would prove to be another wild match. That match was played at the Rio Rancho High School auxiliary gymnasium, a significantly smaller setting that was packed with Escalante fans. The condensed and compact venue seemed much louder without hundreds of empty seats off of which cheers could bounce.

Set one went to the Lady Lobos who pulled away early for a 25-15 win. But the middle sets were once again a struggle for Escalante as they lost momentum. The Coyotes pulled away late for a 25-13 win in the second set, while the Lady Lobos took a lead in the third set after trailing early, but fell back behind to 25-22.

But a 9-1 run guided the Lobos back into the driver’s seat in set four, and they took over for a 25-18 win. And they carried that momentum through set five, jumping out to the early lead and closing the door early in a 15-6 win.

A stunning 40 assists from Maestas led Escalante to the win, with Terrazas leading the way with 21 kills, and Torrez and junior Brycelyn Martinez both in double figures.

“I think that we really came together and started trusting each other more,” Terrazas said. “And the energy was just there, and the chemistry. And the crowd really helped us.”

After advancing, Escalante had a quick turnaround, barely 12 hours overnight, to face No. 5 Capitan the next morning at Rio Rancho High School. After the five thrilling sets, Escalante ultimately fell at the end of their season, filling the eyes of Lady Lobos with tears.

Capitan was the only team besides Escalante to win a single set against Laguna-Acoma when they lost in four in the semifinal; the Hawks swept the No. 1 and No. 2 seeds to win their other matches.

Maestas put up an impressive 120 assists on the week in four state tournament matches, adding 15 kills and nine aces. Terrazas was the team leader with 57 kills, and Torrez close behind at 51. Martinez also had 39 kills, and eight aces as her serve was often the catalyst to long runs.

As Salazar-Valdez returns for her second senior, there will be plenty to work with. A talented senior class leaves the team, including Terrazas, Torrez and Salazar, among others. But Martinez and Maestas will be among those returning to lead the team, and players will join from a strong junior varsity team, some of whom saw playing time over the weekend.