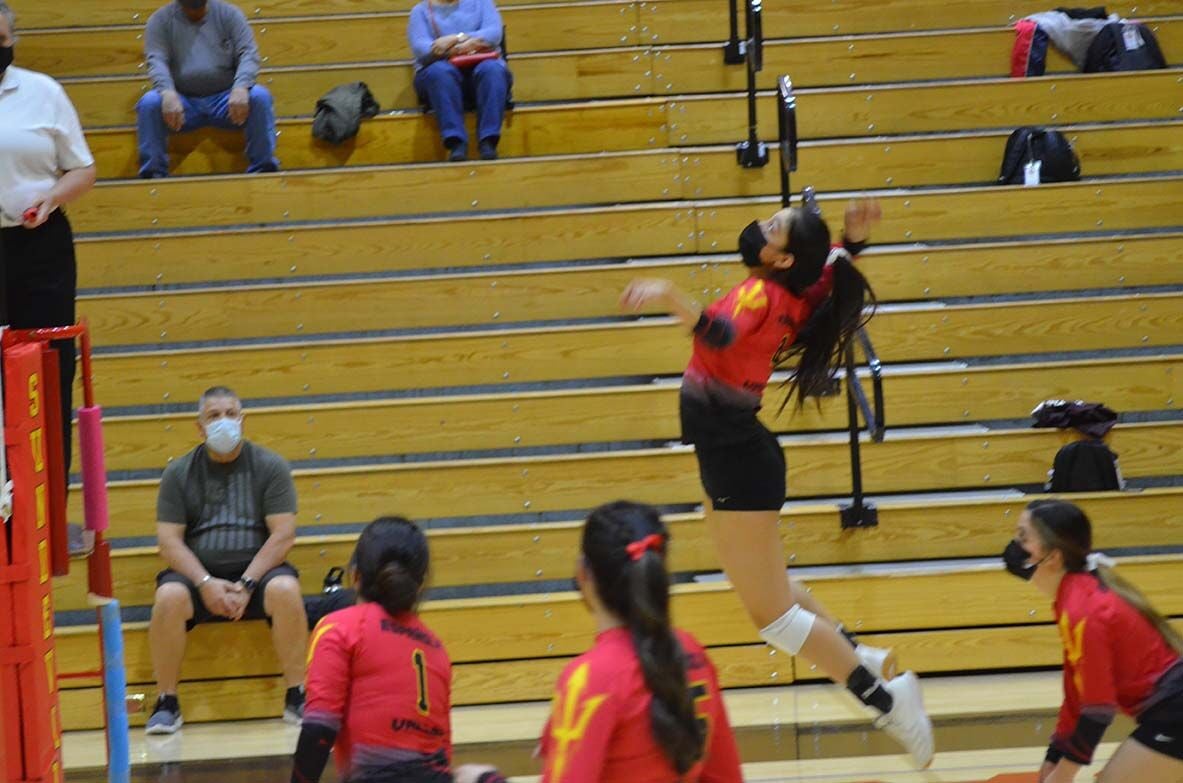 Sundevil Roxane DeLeon skies for a swing during the match against Pojoaque High School. Two straight losses have put the Sundevils out of first place in the district. 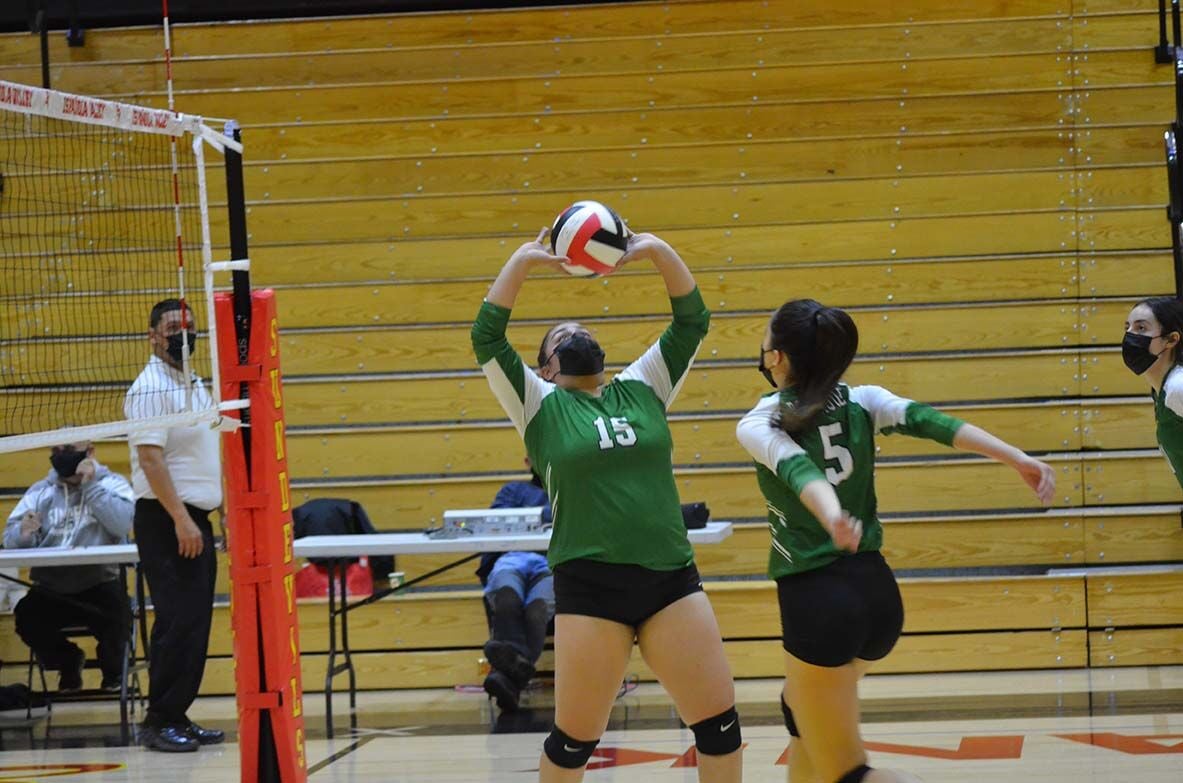 Sundevil Roxane DeLeon skies for a swing during the match against Pojoaque High School. Two straight losses have put the Sundevils out of first place in the district.

Led by a dominant performance by sisters Alicia and Sonya Quintana, the Pojoaque High School Elkettes snuck past the Española Valley High School Lady Sundevils in five sets and planted themselves firmly in the race for a district championship.

The Quintana siblings combined for 35 kills and led the way throughout the match. Alicia Quintana, a senior, led the Elkettes with 19 kills and looked unstoppable against the Sundevil defense. Sophomore Sonya Quintana rotated with her seamlessly and added 16 kills of her own.

Junior setter Ayana Aguirre was instrumental in keeping the offense in a strong rhythm and logged 41 assists through the match. Aguirre said the strong passing and serving helped her keep everyone together, and strong communication was the key in the match.

Pojoaque coach Joe Rodriguez said the key was just in having time for the team to practice together after so many months in limited pods.

“If we had an extra month, we’d probably be much further along than this,” he said.

In the first set, both teams were close through the first half, with the score tied at 13, but Pojoaque went on a run to grab a 23-17 lead and closed out the set 25-20. Sophomore Adrianna Rodriguez was also strong in the first set with four kills from the left side despite being listed at just 5-feet-2-inches tall.

The Sundevils battled back in set two and, despite losing the first three points, raced out to a 14-5 lead. Pojoaque battled back to get within four at 19-15, but dropped the set 25-18.

The Elkettes found a strong rhythm in set three. Aguirre notched 12 assists in the set, and the Quintana siblings combined for 10 kills in a 25-18 win. Aguirre said she was nervous at the beginning but felt stronger through the third set as the match progressed.

Española kept the pressure on, though, and took set four 25-19 with a solo block from Cameron Connors.

But in set five, the Elkettes rolled. Pojoaque took the first four points, dropped two, then won six more to take a dominant 10-2 lead. Alicia Quintana and junior Aspen Garcia combined for three blocks as the Elkettes rolled to a 15-6 win to take the victory.

“We just picked up,” Aguirre said about the final set. “We were happier, we were more energetic, we wanted to play, we wanted to win.”

The match capped off a run of 20 total sets played in a four-day span, including 10 sets in a doubleheader on March 20, and 29 total sets in the eight days since their first match.

Aguirre said the best thing they need to do going forward is “smiling, having fun, talking to each other, working hard at practice, and taking care of ourselves.”

Rodriguez said errors were another key improvement, and the team went from having double digit errors in their first match to less than five in their most recent one.

As of Tuesday, Los Alamos holds first place in the District 2-4A standings at 3-1. Pojoaque and Española Valley are neck and neck at 4-2 and 3-2, respectively, followed by Moriarty at 2-2. Taos is in last place with an 0-5 district record.

“It’s fun, because any given night, someone can upset someone,” Rodriguez said.

Española takes on Taos on Tuesday, and travels to Los Alamos on Thursday (3/25) as they try to retake the lead in the district.

The Elkettes will face Los Alamos on the road Wednesday (3/24) and finish their district schedule Friday at Moriarty and will look to advance to states.