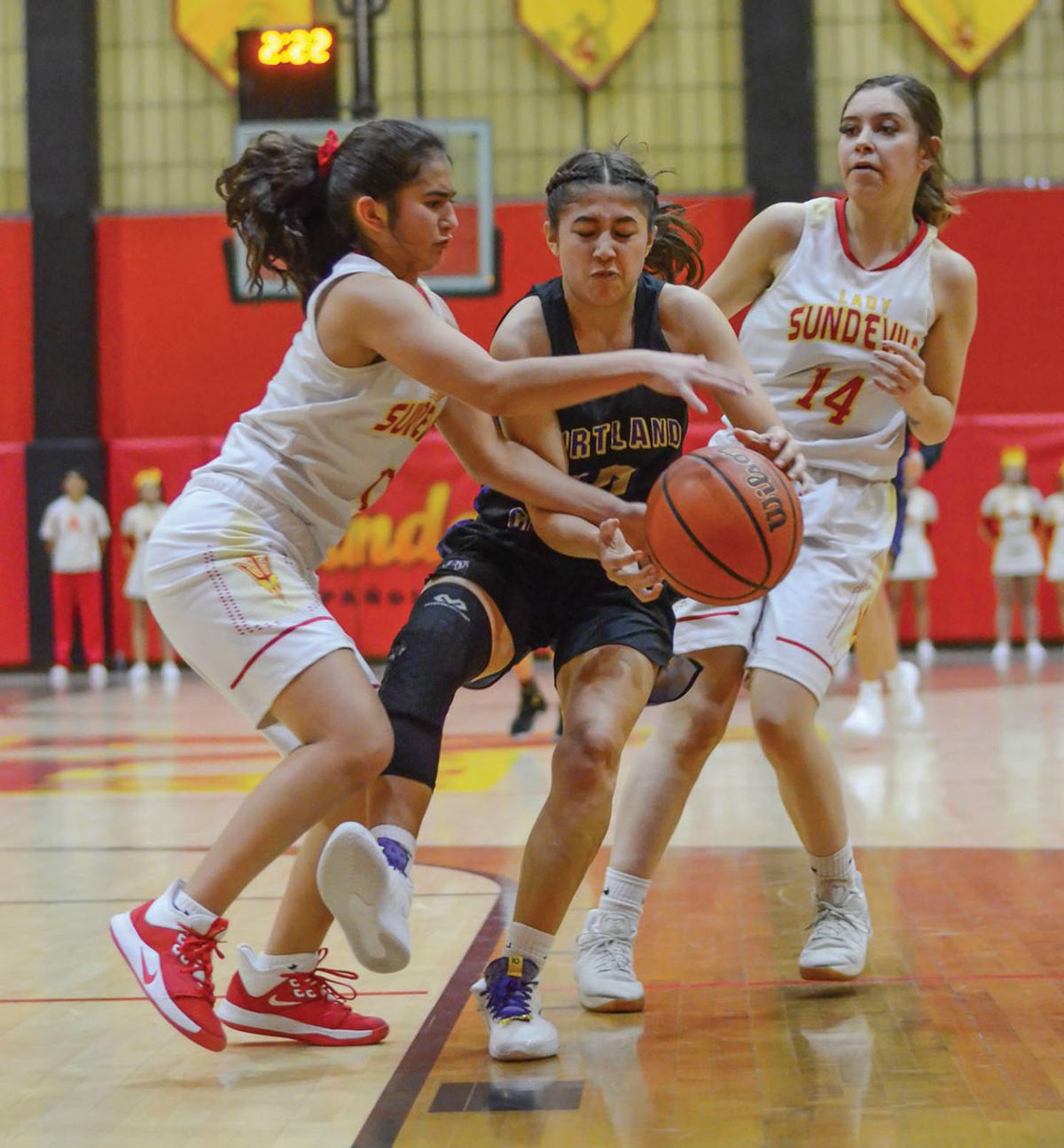 Española Valley’s Miranda Salazar (left) attempts to steal the ball from a Kirtland Central player during the Lady Broncos’ 56-44 win over the Lady Sundevils on Jan. 11 at Edward Medina Gymnasium. 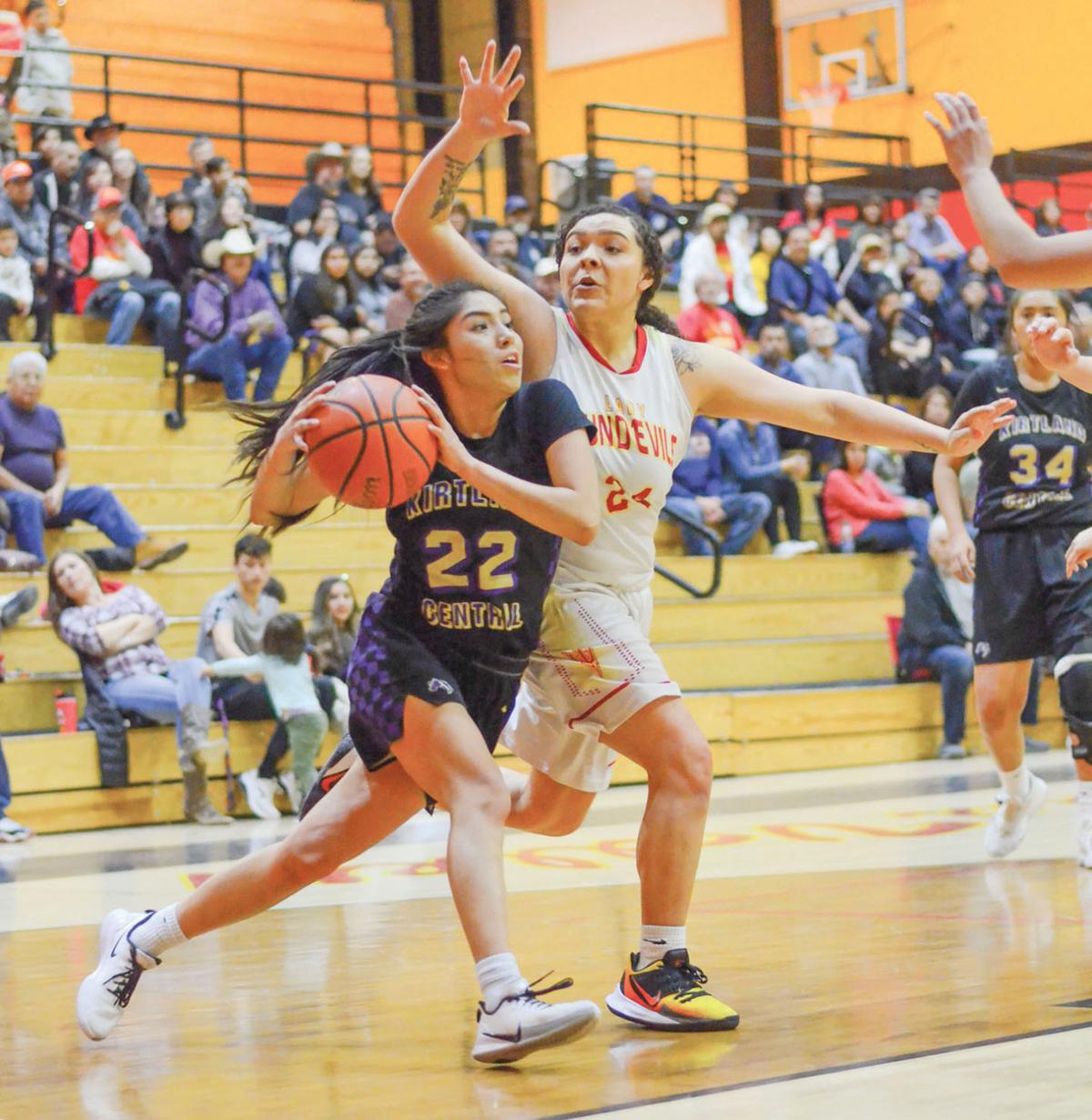 Kirtland Central guard Tatelyn Manheimer drives down the baseline while being guarded by Española Valley’s Jaylynn Padilla during the Lady Broncos’ 56-44 win over the Lady Sundevils on Jan. 11 at Edward Medina Gymnasium. 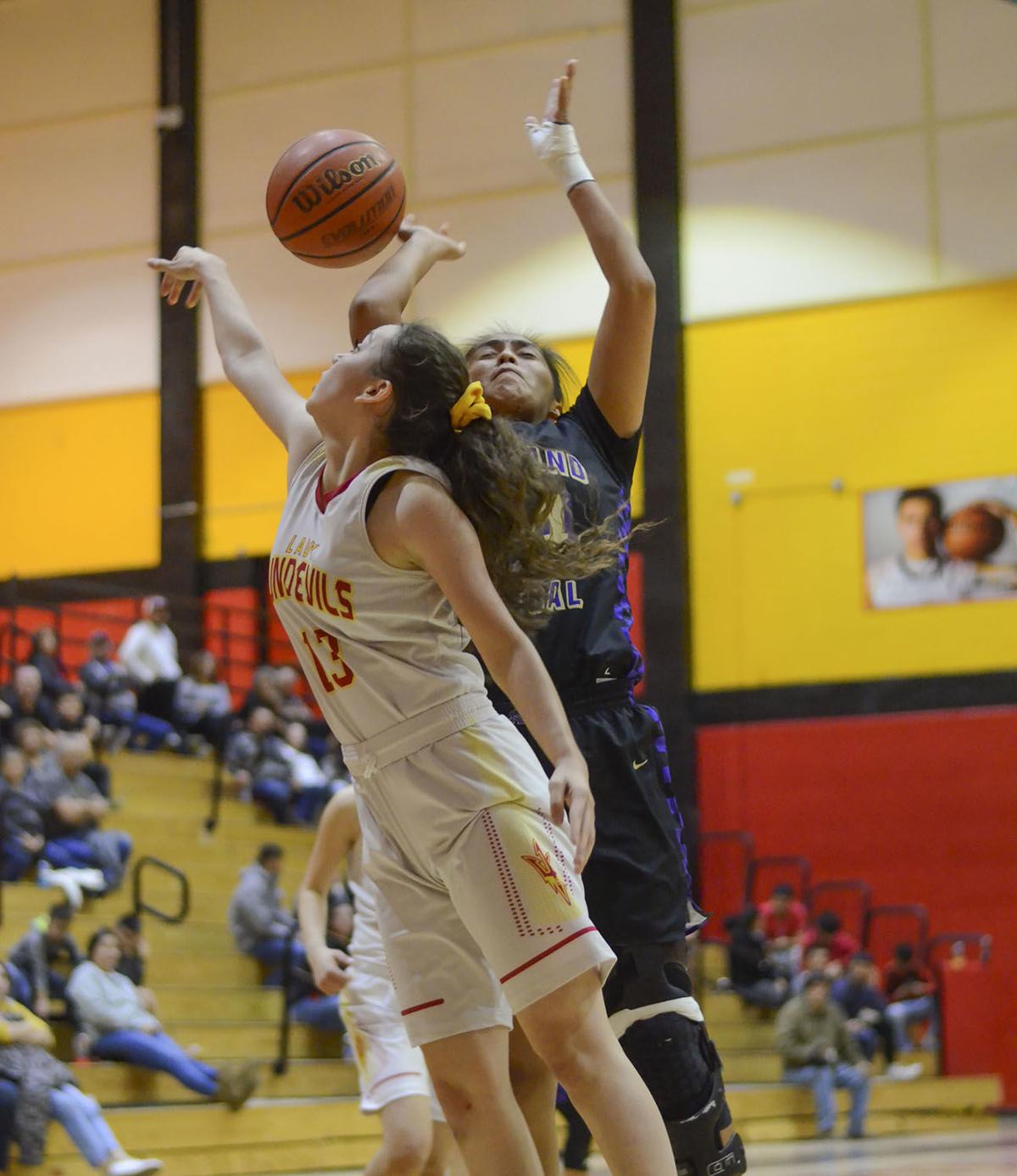 Española Valley’s Miranda Salazar (left) attempts to steal the ball from a Kirtland Central player during the Lady Broncos’ 56-44 win over the Lady Sundevils on Jan. 11 at Edward Medina Gymnasium.

Kirtland Central guard Tatelyn Manheimer drives down the baseline while being guarded by Española Valley’s Jaylynn Padilla during the Lady Broncos’ 56-44 win over the Lady Sundevils on Jan. 11 at Edward Medina Gymnasium.

Of course, parents, fans and the players themselves would like to see more victories in the win column, but Española Valley High School girls basketball coach Joe Estrada believes his team is still gaining some valuable learning lessons to use to their disposal come district play and beyond.

Losers of their last three games, Estrada said the Lady Sundevils (8-7) are starting to shape themselves and build some identity, they’ve just had to do so as of late by way of some tough love.

“What’s the old saying, ‘Iron sharpens iron?’” Estrada said. “I think that’s a lot of what we are going through right now, but I think we found a spark tonight and I think we found something.”

In a rematch of the state semifinals last season, the Lady Sundevils played a more competitive game this time around, losing 56-44, in comparison to the 55-23 thumping the Lady Broncos laid down last March at The Pit in Albuquerque.

The matchup with the Kirtland came one week after the Lady Sundevils hosted No. 1 Los Lunas High School on Jan. 4, a contest the Lady Tigers won 64-39.

“Kirtland Central is a good team and I think what we take away from it is the realization that we can play with this team,” Estrada said. “We had a quarter-and-a-half, a quarter-and-two-thirds against Los Lunas where we actually outplayed them a little bit, so we have to build on those times and keep after it.”

As Kirtland produced an outburst of 22 points in the second quarter to build a 33-20 lead at halftime, Española countered in the second half with pressure from all angles. That strategy paid dividends more times than not, as the defensive intensity from the Lady Sundevils flustered Kirtland’s guards and ball handlers.

With 2 minutes, 50 seconds left in the third quarter, Española’s Jaylynn Padilla stole the ball near half court and raced the other way for a layup that brought the Lady Sundevils to within 37-27. However, Española would never cut the deficit to single-digits the rest of the way, and moments after Padilla’s steal and score, the Lady Sundevils were penalized for a technical foul for having six players on the court.

That senseless error seemed to halt most of the momentum Española had built, as Kirtland responded by scoring the final nine points of the quarter to increase its lead to 46-27 heading into the final eight minutes.

The Lady Broncos demonstrated the will to rebound on the offensive end, as two buckets in the 9-0 run came on third and fifth chances on possessions. The Lady Sundevils had a rough time boxing out and the biggest dagger of the run made its way through the net from 3-point range, as Kirtland’s Candace Patterson drilled a triple from the right wing after her teammates battled underneath time and time again to snag offensive boards.

“They shot the ball well and they’ve got some nice size and the big girls play good too,” Estrada said. “If you only saw them play the second half, you might not think they’re as good as they are, but I think our pressure really rattled them in the second half. We got some turnovers, made them rush and miss some easy shots. They have really good guards and we had them shook up and we had them looking around wondering where we were coming from next.”

The biggest crutches for Española were the first and third quarters, where the Lady Sundevils scored only four and seven points.

Jasmine Baca played inspiring ball for Española with several blocked shots on the defensive end, and her coast-to-coast layup with 4:41 remaining brought Española back within 10 points again at 50-40. For the game, Baca led Española with 11 points, scoring 10 of those over the final two quarters.

Española will have another busy week, as they return to action Wednesday (1/15) to host Belen High School before taking a short road trip to Santa Fe to square off with Capital High School Friday night. Saturday marks another pivotal Class 4A matchup, as No. 4 Gallup High School travels to Española for a 7 p.m. tip.