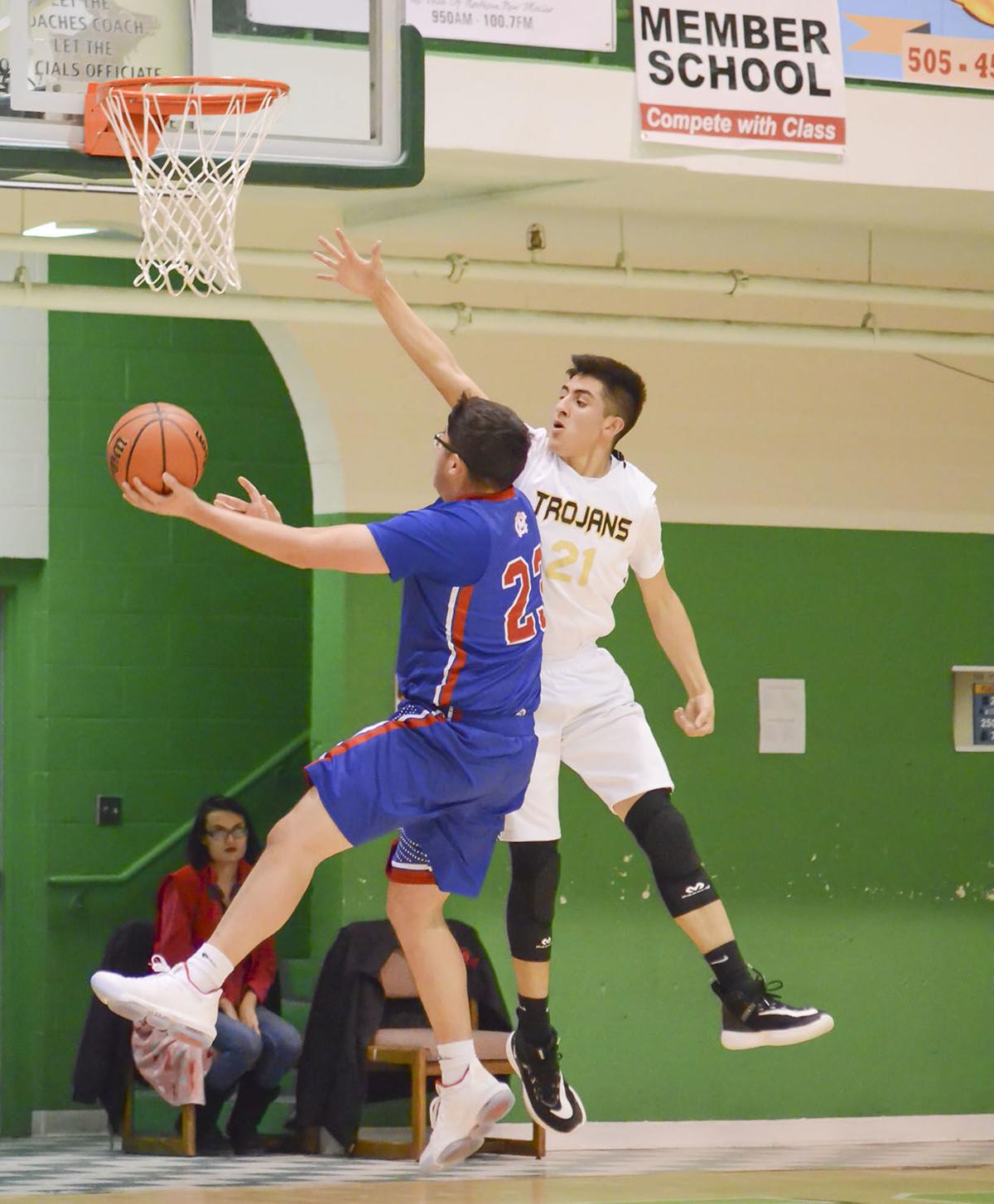 Mesa Vista’s Damian Trujillo attempts to block Josh Esquibel’s layup during the Trojan’s 54-52 win over the Bobcats in the NRG Tournament third-place game on Jan. 4 at Ben Luján Gymnasium. 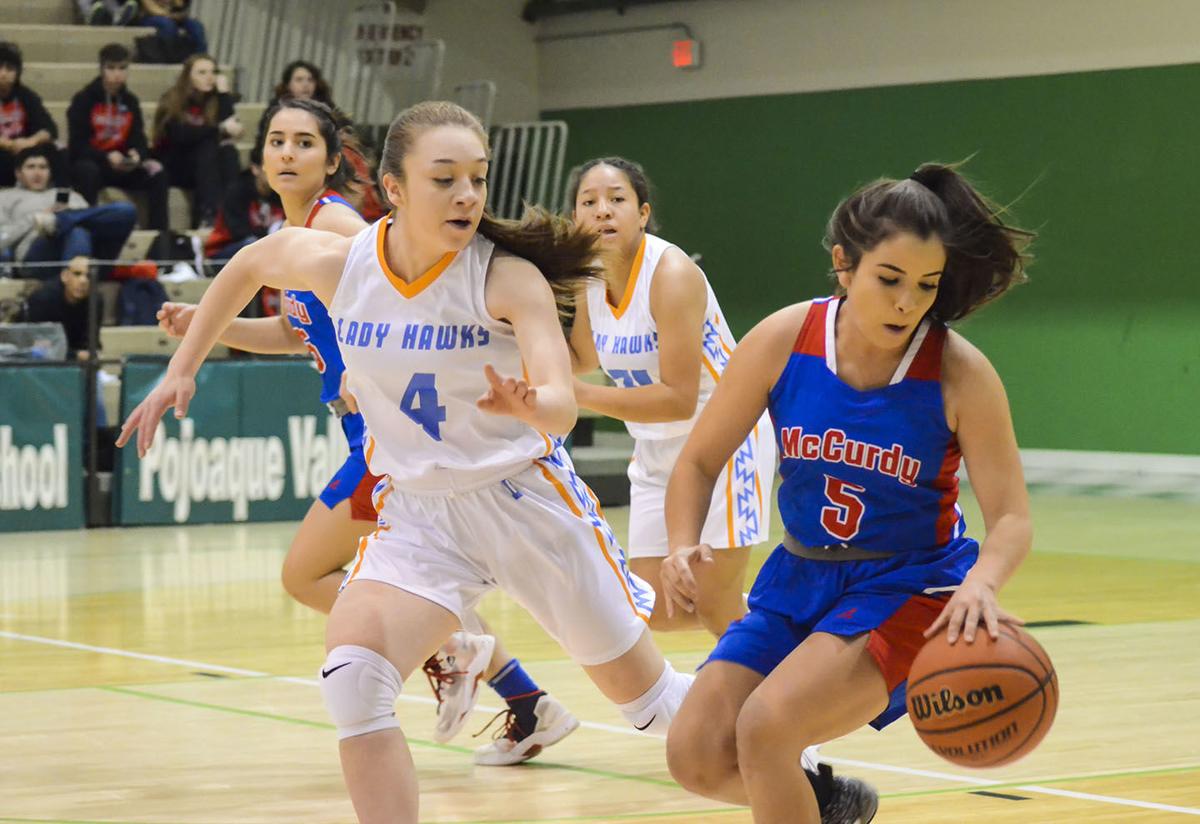 McCurdy senior Jayme Bustos dribbles upcourt while being defended by Dulce’s Stella Gomez during the Lady Bobcats 50-40 win over the Lady Hawks in the NRG Tournament consolation championship on Jan. 4 at Ben Luján Gymnasium.

Mesa Vista’s Damian Trujillo attempts to block Josh Esquibel’s layup during the Trojan’s 54-52 win over the Bobcats in the NRG Tournament third-place game on Jan. 4 at Ben Luján Gymnasium.

McCurdy senior Jayme Bustos dribbles upcourt while being defended by Dulce’s Stella Gomez during the Lady Bobcats 50-40 win over the Lady Hawks in the NRG Tournament consolation championship on Jan. 4 at Ben Luján Gymnasium.

With the game coming to a close and the Christmas holiday already passed, Mesa Vista High School senior co-captain Ryan Garcia was gift wrapped a present he probably should have never received.

As the boys third-place game of the Northern Rio Grande Tournament that featured Mesa Vista and McCurdy Charter School inched toward the final moments of regulation, the game seemed destined for overtime.

The Trojans held a 52-49 lead with under 30 seconds remaining, then Diego Delgado drilled a game-tying 3-pointer for the Bobcats with 19 seconds on the clock.

That was part one of the formula to send the game to an extra four minutes, and part two — a defensive stop on the other end — was successfully completed 18 seconds later.

However, after securing the defensive rebound with 1 tick left after Mesa Vista’s Damian Trujillo missed a shot from the paint, Delgado signaled toward the official for a timeout — the problem was, McCurdy had no timeouts remaining, so a technical foul was called, awarding Mesa Vista two free throw attempts and possession.

All the Trojans needed to do was sink one free throw, but Garcia calmly hit nothing but nylon on both attempts. After inbounding the ball to run out the clock, Mesa Vista celebrated its 54-52 win to claim third place on Jan. 4 at Pojoaque Valley High School’s Ben Luján Gymnasium.

Garcia did well to block out the pressure of shooting with an empty restricted area, as he was all alone on an island with the game in his hands.

“I knew I just had to hit one,” Garcia said. “I just tried to ignore the noise and got in my peaceful place to knock them down.”

The Trojans were just a mere 9-of-19 from the stripe in the second half up until Garcia’s game winners, but head coach Richard Apodaca knew his senior was most capable of getting the job done.

“Right away (after the technical was called), me and Ryan found each other and we kind of locked in,” Apodaca said. “I knew he had it and he just needed a second to get his mental state right; we knew he was going to knock them down and it sounds a little bit fairytailish, but he’s been clutch on his free throws.”

McCurdy was most fluent in the first half, as the Bobcats took an 11-8 lead after a quarter and built a 20-16 lead at halftime behind nine points from Josh Esquibel and six from Andres Martinez.

In the second half, the Bobcats began to settle for jumpers, while Mesa Vista — specifically Trujillo — forced the issue inside to regain control of the game. Trujillo scored 12 of his 19 points over the final two quarters, and his increased presence included four takes to the rim where he scored despite being fouled.

“I knew we had to get going,” Trujillo said about his play in the second half. “If I got going, I knew my teammates would get going.”

Apodaca said his team’s ability to run various defensive sets as the game progressed kept McCurdy on its heels. The Trojans utilized a pure zone, a box-and-1, triangle-and-2 and even jumped into a press defense in the fourth quarter.

“One of the things we’ve tried to do is just do a lot of different things,” Apodaca said. “For us, that was big because we didn’t allow them to get comfortable. In the first half in our zone they did get comfortable and they were able to knock down some shots, but for the most part in the second half, we got them to take the shots we wanted and 23 (Esquibel) didn’t hurt as much.”

McCurdy struggled to make field goals down the stretch, as the Bobcats put together a 4-of-15 shooting effort (26 percent) over the final quarter, while Mesa Vista shot 5-of-10.

For the game, Martinez led McCurdy with 19 points and Esquibel finished with 14. Garcia scored all nine of his points for Mesa Vista in the second half and Jose Trujillo and Alejandro Trujillo added 10 and eight.

Moving forward, the Trojans are hoping the win against the Bobcats can serve as a springboard to more victories in succession.

“Coach has been saying we need to start a win streak and get on a run,” Garcia said. “We figured this was the night to do it and start the streak.”

Two weeks’ time had little effect on changing the outcome of Dulce High School and McCurdy’s final fate in a tournament setting at Ben Luján Gymnasium.

After the Lady Bobcats and Lady Hawks faced each other in the seventh-place game of the Ben Luján Tournament on Dec. 21, the two teams squared off again, this time in the NRG consolation championship.

Despite the different tournament place at stake, McCurdy constructed a similar result, following up on its 40-37 win in the Ben Luján with a 50-40 win on Jan. 4 to secure fifth place in the NRG.

The game’s result largely came down to the fourth quarter, as Dulce made a final push before McCurdy closed out the game.

Leading 37-27 entering the final eight minutes, the Lady Bobcats allowed the Lady Hawks to rattle off the first seven points by way of two buckets and a steal from Chancey Vicenti and a long 3-pointer from the left wing by Jasmine Keith.

Later, Emma Lovato’s swipe and steal of the ball from Dulce’s Kailey Julian led to a breakaway layup in transition to give McCurdy a 45-37 cushion to close out the final 2:33 of the game.

The Lady Bobcats were determined to find opportunities inside, and they were awarded free throws at will. McCurdy shot a grand total of 36 free throws for the game and converted 23. In the second half alone, the Lady Bobcats knocked down 15-of-23 from the stripe.