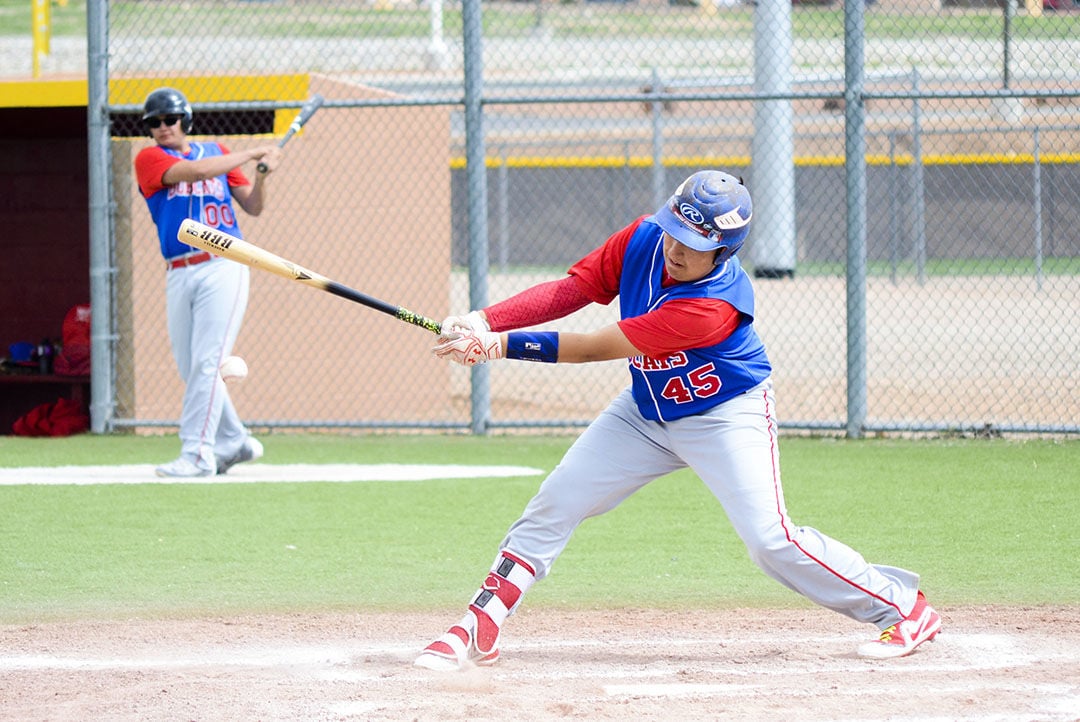 Nicholas Croff swings at a pitch in the first game of a doubleheader against Santa Fe Indian School at the SFIS Athletic Complex April 11. McCurdy suffered a 17-7 loss in game 1, but bounced back with a 6-3 win in game 2 in eight innings. 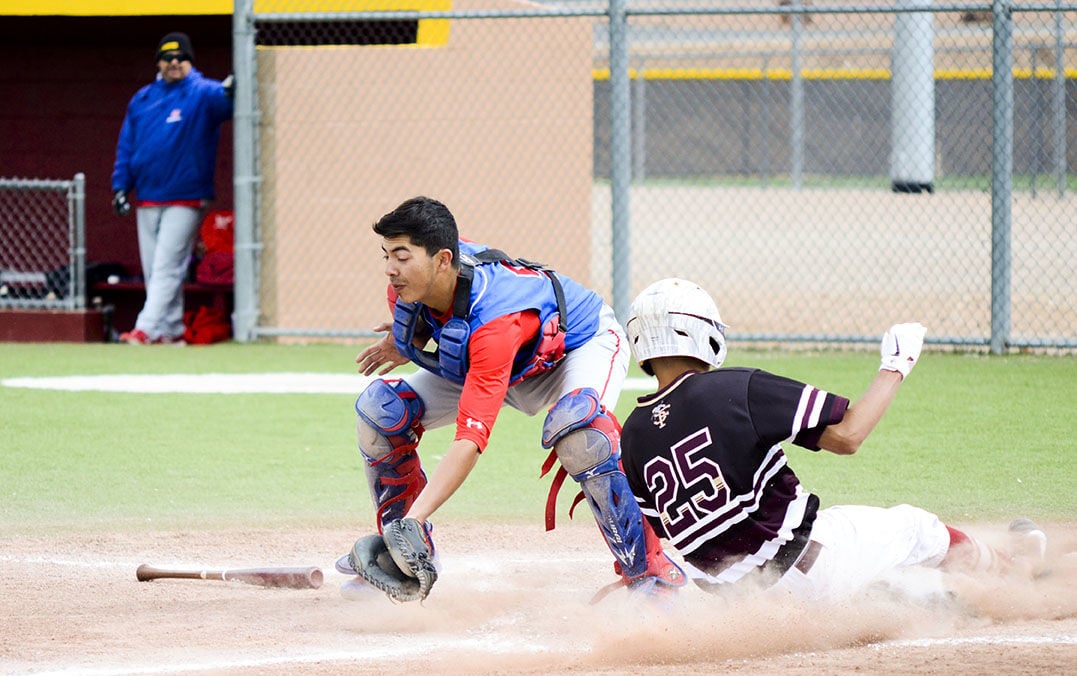 McCurdy’s Paul Maestas (left) receives the ball at home plate after a Santa Fe Indian School baserunner slides to score a run during game 1 of the Bobcats’ doubleheader April 11 at the SFIS Athletic Complex.

Nicholas Croff swings at a pitch in the first game of a doubleheader against Santa Fe Indian School at the SFIS Athletic Complex April 11. McCurdy suffered a 17-7 loss in game 1, but bounced back with a 6-3 win in game 2 in eight innings.

McCurdy’s Paul Maestas (left) receives the ball at home plate after a Santa Fe Indian School baserunner slides to score a run during game 1 of the Bobcats’ doubleheader April 11 at the SFIS Athletic Complex.

Despite an overwhelming 17-7 loss in five innings to Santa Fe Indian School in game 1 of a doubleheader April 11 at the SFIS Athletic Complex, the McCurdy Charter School baseball team stayed aggressive.

That aggressive nature implemented by head coach Roberto DeVargas paid off in game 2 of the doubleheader, as the Bobcats pesky base running helped them take a 6-3 win in eight innings to go even on the day.

McCurdy (4-4) scored four runs in the top of the eighth inning, which included Nicholas Croff’s steal from third to home, all apart of the plan to get out with a win.

“I just figured we had some quick guys (on base) and we had some opportunities for steals,” DeVargas said about the eighth inning of game 2. “We were putting the bat on the ball, so I figured we should start doing some hit-and-runs and I told the guys, ‘When you get on base, get ready to run, let’s be aggressive and let’s get the lead.”

As for the steal from home, it was all about searching for a play as the bottom of the lineup started to bat.

“I told him (Croff) we needed him to score and we needed a big play because we were getting to the bottom of the order,” DeVargas said. “I told him to go halfway and if he (pitcher) doesn’t see you, take it. The catcher threw it back to the pitcher and I freaked out. I go, ‘Yes,’ we got it.”

After getting those four runs, the Bobcats held the Braves (12-5) to one run in the bottom of the eighth to secure the win and complete the comeback from trailing 2-0 after the fifth inning.

Indian School pitcher Cameron Ortiz took the loss for the Braves, allowing all 10 hits and surrendering all six runs in the final three innings.

In game 1, starting Bobcats’ pitcher Kemmer Croff took the grunt of the attack by the Indian School, who put up 12 runs in the first inning behind 13 hits and two walks.

The Indian School’s offensive onslaught outshined the top of the frame, where the Bobcats got off to a 2-0 lead after A.J. Vallo escaped a pickle between third base and home plate and Isaiah Archuleta recorded an RBI to score Kemmer Croff.

After the loss, DeVargas just told his team to keep battling and perceive things in the long run.

“I just kept telling the guys these games are a marathon and don’t let it be over in a heartbeat,” he said. “They (Indian School) just put the bat on the ball (in game 1) and got some base hits and I think Kemmer got a little frustrated.”

McCurdy had two more games April 13 at Mora High School canceled due to weather, further halting their chance to build a rhythm after a slow schedule through six games to start the season.

Now, the team will gear up for the grunt of the schedule, which features a total of 12 games from Tuesday to May 2 before the start of the 2019 Baseball State Championships on May 8.

“We haven’t had a chance to get into a rhythm, but also haven’t had the chance to do different lineups and different batting orders,” DeVargas said. “Hopefully now we get into a good rhythm and start playing some ball. You can only do so much in practice and the guys really liked the second lineup in the second game and they told me that on the bus after.”

Just one example was switching Santiago Samora to right field in game 2.

“He did really good there and it all worked out,” DeVargas said. “Now they’re understanding they can play more than one position, also. We put them in different positions or batting orders to see how they respond, because we’re using these games to get ready for district and the state tournament.”