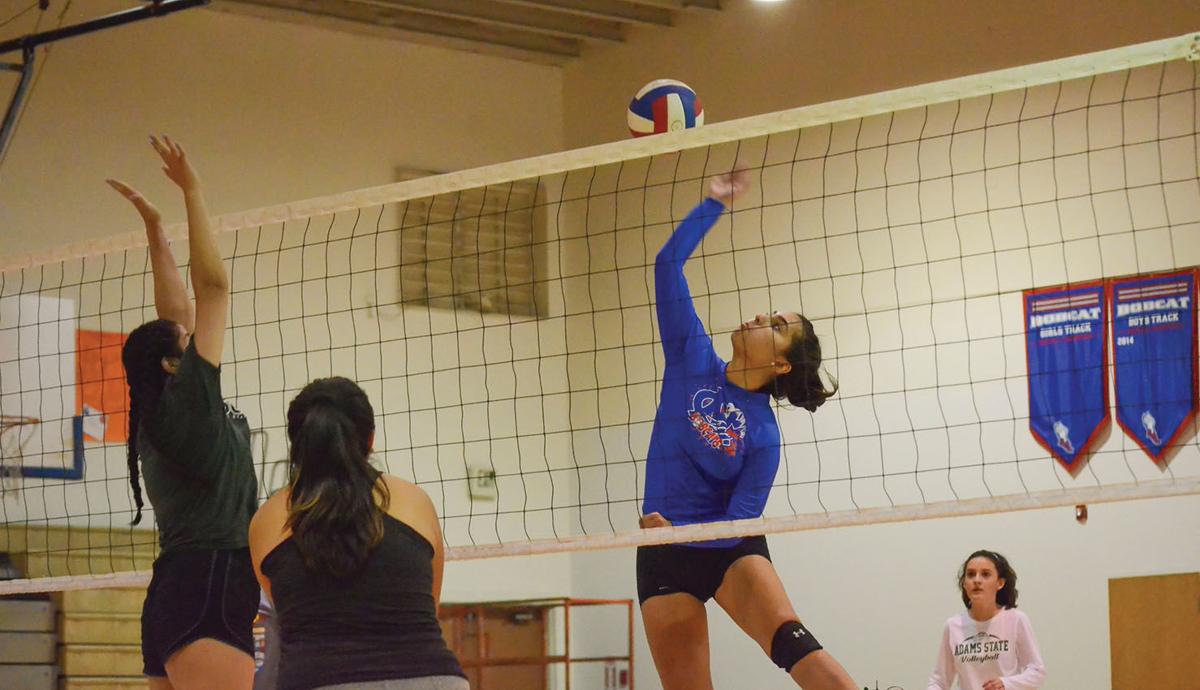 Senior outside hitter Devyn Cordova kills the ball during summer workouts on Aug. 1. Cordova — the team’s strongest hitter — returns for the Lady Bobcats after missing a majority of her junior season with a knee injury. 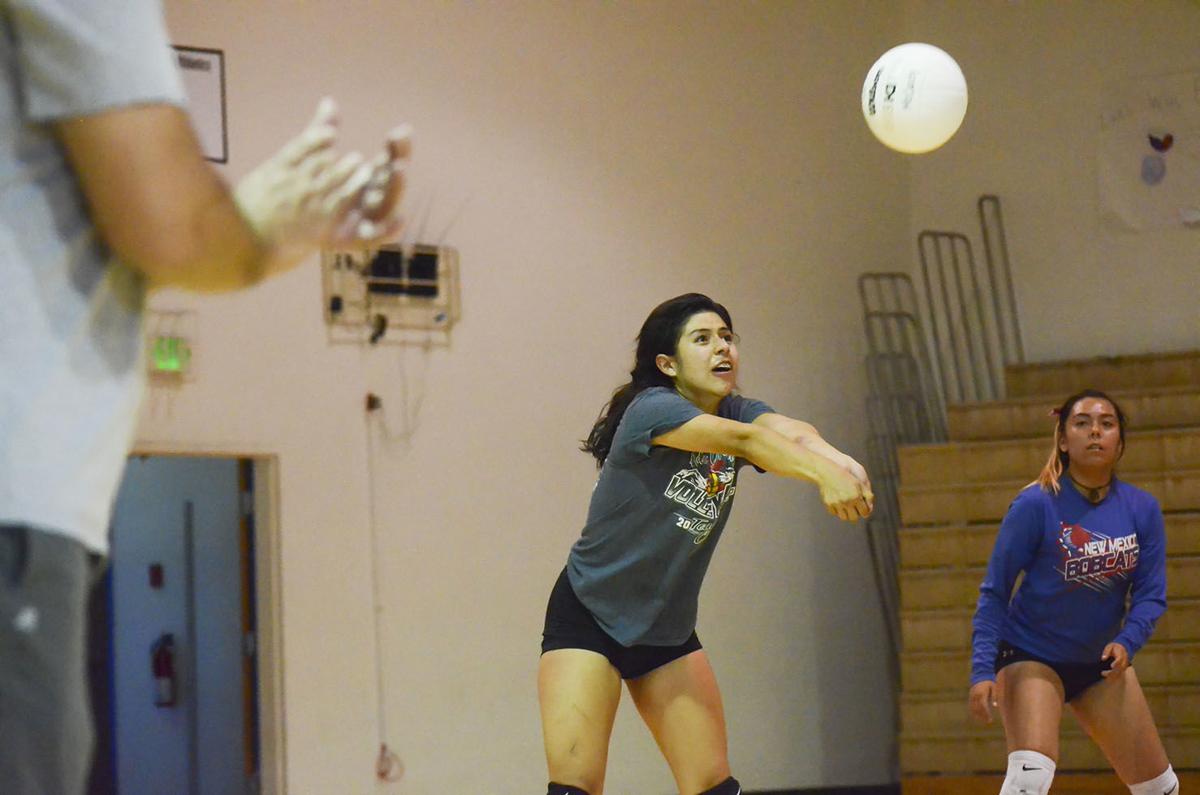 Senior Beatriz Salazar bumps the ball during summer workouts on Aug. 1. The senior will be utilized as a defensive specialist for the Lady Bobcats this season.

Senior outside hitter Devyn Cordova kills the ball during summer workouts on Aug. 1. Cordova — the team’s strongest hitter — returns for the Lady Bobcats after missing a majority of her junior season with a knee injury.

Senior Beatriz Salazar bumps the ball during summer workouts on Aug. 1. The senior will be utilized as a defensive specialist for the Lady Bobcats this season.

When McCurdy Charter School athletic director Christian Lopez took over as the head coach of the Lady Bobcats softball team in 2015, he virtually had to learn the entire sport from scratch.

Four years later, now Lopez is tackling the task of coaching the Lady Bobcats volleyball team as the interim head coach for the 2019 season. Unlike softball, he won’t be starting from scratch this time.

He can thank his sister, Paula Lopez, who coached volleyball at Escalante High School in the 1980s.

“When I was cleaning out her stuff — she passed away several years ago — but I found her volleyball playbooks,” Lopez said. “I even use to give her a hard time and say, ‘How can you run plays in volleyball?’ But when I found them, I started looking at it and it started to make sense.”

Lopez replaces Roberto DeVargas — the school’s head baseball coach — who led the volleyball team for nearly the last two seasons after JuliAnn Martinez was fired five games into the 2017 campaign.

DeVargas will return to strictly coaching the baseball team.

“Roberto came in and you can say he was out of his element, because he’s a baseball coach,” Lopez said. “He came in and took it on and did a pretty decent job. He was as challenged as much as the girls were, but he came through. The biggest thing, he wasn’t as used to coaching girls.”

Lopez has plenty of experience in doing so though, and the first thing he’s implemented for the volleyball team is an enhanced offseason conditioning program. You’ll even spot him taking part in pushups with the team at any given point in practice that he decides to make his team drop to the floor.

“I went back to basics with them,” Lopez said. “Running-jumping, running-stopping and front-back, side-to-side. Everything you do on a volleyball court, I worked it into a workout. I knew I had to work out a lot of leg and core work. Everything is contained inside that court there, so I implemented a volleyball type workout program as much as I could.”

One player who may be benefiting more than anyone else from the increased conditioning is senior outside hitter Devyn Cordova. The big swinger missed a majority of last season with a knee injury, but is back healthy for her final year.

“It sucked at the beginning going through the injury and having to miss a full season of volleyball,” Cordova said. Working back though, I think I’ve come back stronger and I think I’m going to do real well this year.”

Cordova, along with fellow senior middle hitter/blocker Erika Loera-Avila and junior opposite hitter Marisa Herrera will be the compiling force to form a stout front row for the Lady Bobcats.

“They’re all strong,” Lopez said about the trio. “Marisa, you know, I’d hate to play against her in basketball, because she’ll box you out and move you. She’s strong and solid and she works out hard and she knows the workouts have been good for her. Devyn was a little slow at first, but she’s come back strong. Even yesterday, she was cranking some balls from the corner, and you wouldn’t want to be in the way. The thing about her, she has a chance to get looked at by some colleges, she’s that good and she loves the sport. She’s a natural athlete and I just got to keep her healthy.”

While there is no question about Cordova’s ability to terminate play, Lopez believes Loera-Avila has the same potential.

“Erika has the height,” he said. “She’s got the talent and she can really block. We’ll just have to work a little more on her timing and judgement. If I can get her to power it down and get those kills, we’ll be in good shape.”

Junior Gracie Valencia is another hitter who will have an increased role from a season ago.

Lopez plans to run a 5-1 offense, although he said the eventual goal is to be able to utilize two setters. He will have the luxury of having depth at the position, and he has confidence in the ability of juniors Olivia Cantrell and Heavenly Arellano. Senior Jayme Bustos returns for her third year as the team’s starting libero, and she has ability to set as well, if needed.

Defensively, the Lady Bobcats will rely on the likes of Bustos, Delilah Garcia and Beatriz Salazar to pick up balls in the back row to efficiently transition to offense.

“Defensively, our back row has to be solid and we’ll have to pick a lot of balls,” Lopez said. “Back there, I see Delilah, Jayme and probably Bea (triz); she’s not so strong in the front, but in the back she’s great and picks up a lot of that junk that comes over the net.”

A season ago, McCurdy finished 10-12 overall and struggled down the stretch in matches that went past three sets. The team was 4-6 in those scenarios, and Lopez said that is another reason why he has stressed the importance of conditioning heading into this season.

“We want to play three games and get it over with so we can go eat, but if someone takes us to four or five games, then we should be the better conditioned team,” he said. “Like I told them though, ‘We’re not going to lose because we’re out of shape.’ We’ll lose if the other team is better than us or they had a better game than we did. If we go four or five sets, we aren’t going to break down physically.”

The one team most likely standing in the way of a potential District 2-2A championship for McCurdy is Desert Academy, who defeated the Lady Bobcats three times last season, including a 3-1 win in the District tournament championship match.

The Lady Wildcats made the quarterfinals in the state tournament last season, and this year they have a new head coach in former Espanola Valley High School assistant Nicole Romero.

“I think we do have a chance to take this District,” Lopez said. “Desert will be our nemesis again in the District, but I think if the girls just play together and unite, we’ll be fine.”

Cordova said the team’s confidence isn’t an issue after finishing 4-2 in regular season District play a year ago, but working together may be the biggest component of the game that will make-or-break the potential for a successful season.

“All of our girls are confident,” she said. “We do need to work on talking and communicating more, and that will only help our team.”