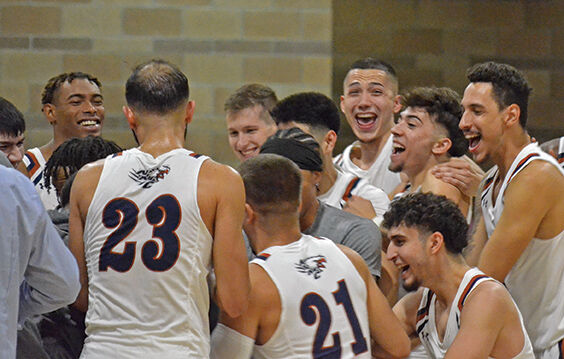 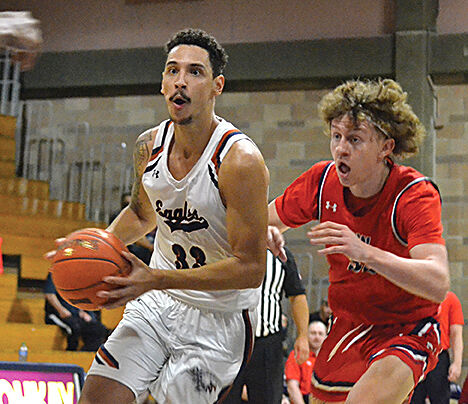 The thought never even occurred to Northern players to not stick out the pandemic and wait for the return of games.

“Never,” said sophomore guard Ricardo Zambrano. “It’s something that’s kind of instilled in all of us. I just can’t sit there and not do anything.”

Players including senior Estevean Martinez, who said he started doing electrical work during the time off, did anything they could to stay on the court.

“We just live to be in the gym all the time,” Martinez said. “At first I was outside on the concrete court for I think like two months. And finally I found out someone who used to work at the Boys and Girls club, he opened the gym for me at like 11, 12 at night. Just so I could get a little hour here and there, trying to do what I could.”

“We were driving 45 minutes every day to go find a gym,” said Ricardo Zambrano.

The Eagles started 2-0 to their new season, and in their first game in over 20 months, the Northern New Mexico College Eagles battled out a victory on their home court over University of the Southwest. Zambrano and Martinez led the Eagles with 21 and 17 points in the 81-76 victory.

“It was wonderful,” said coach Ryan Cordova. “It’s great to play basketball. These kids need it for their mental health. And it’s nice to see the community come out, trying to be safe, supporting the kids. And it’s just a really, really good feeling. I don’t even know how to explain it.”

Martinez said in playing his first game since February 2020, some things caught him by surprise.

“Actually getting my legs back, it felt a little different,” Martinez said. “I thought I was in perfect shape, but actually after a while, I kind of got winded so I had to ask coach for a sub.”

In their season-opener, the Eagles led by double digits in the first half. But early in the second half, the Mustangs came back to take a 41-40 lead. That was when Alejandro Hernandez checked in for the first time.

The sophomore from Spain quickly started grabbing key rebounds and made a few layups, and seemed to give Northern an extra spark. Throughout the game, the referees were lenient with physical contact and often swallowed their whistles, and Cordova said Hernandez can bring that physical play. The Eagles scored 12 straight points and made a 22-5 run to essentially put the game away. Zambrano hit five 3-pointers in one five-minute stretch.

When Northern made that second-half run, Cordova said that was when the crowd got extra involved, which helped the Eagles continue on the run.

Cordova said they have two “equal groups” in practices, a blue group and a white group, and they practice against each other. The blue group started the game, but the white group was the one that made the run.

Hernandez is one of many of the team’s foreign players. The international presence of Northern’s roster contains players from four different continents.

“That’s why we are the Continental Athletic Conference,” Cordova joked. “How else are people in Española or Santa Fe going to get to experience the Brazilian culture? Or the Iranian culture. Or the Spanish culture. If we can’t go there, let’s bring it to them.”

In their return home, the Eagles wanted to put on a show for the home crowd. Martinez said he wanted to “get a few” dunks for teammate Jamal Harris, who missed the Thursday game due to an eligibility miscommunication but played in their second game two days later. That mindset, though, resulted in an alley-oop attempt in the final minute when Cordova wanted to burn clock.

“He almost had a heart attack,” Martinez said about his coach.

But the first game had another special meeting, as it was the team coach’s birthday. Cordova said the players had talked about doing something special for his birthday for two days before.