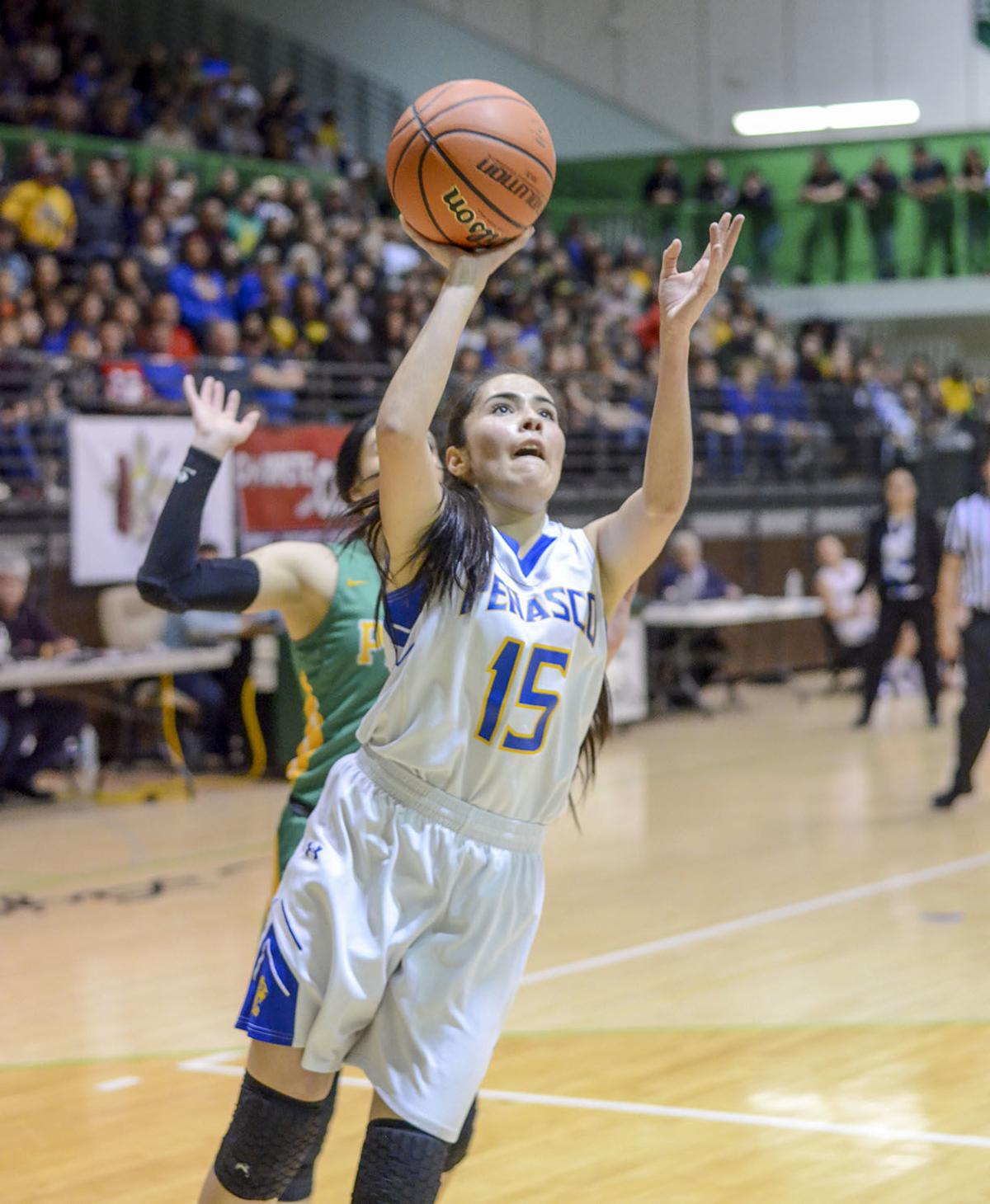 Peñasco’s Adrianna Tafoya shoots from inside against Pecos during Peñasco’s 57-40 win in the NRG Tournament championship game on Jan. 4 at Ben Luján Gymnasium. 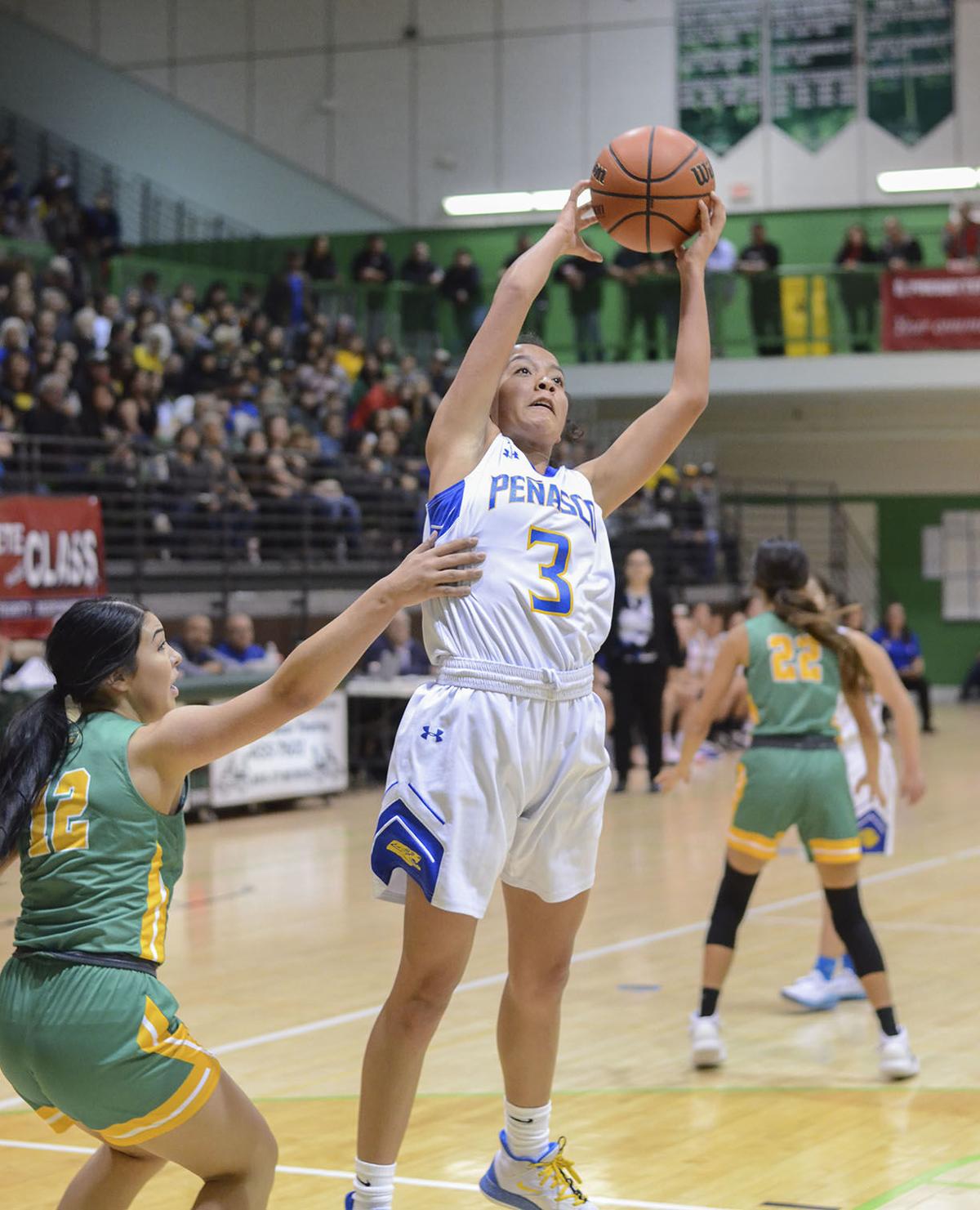 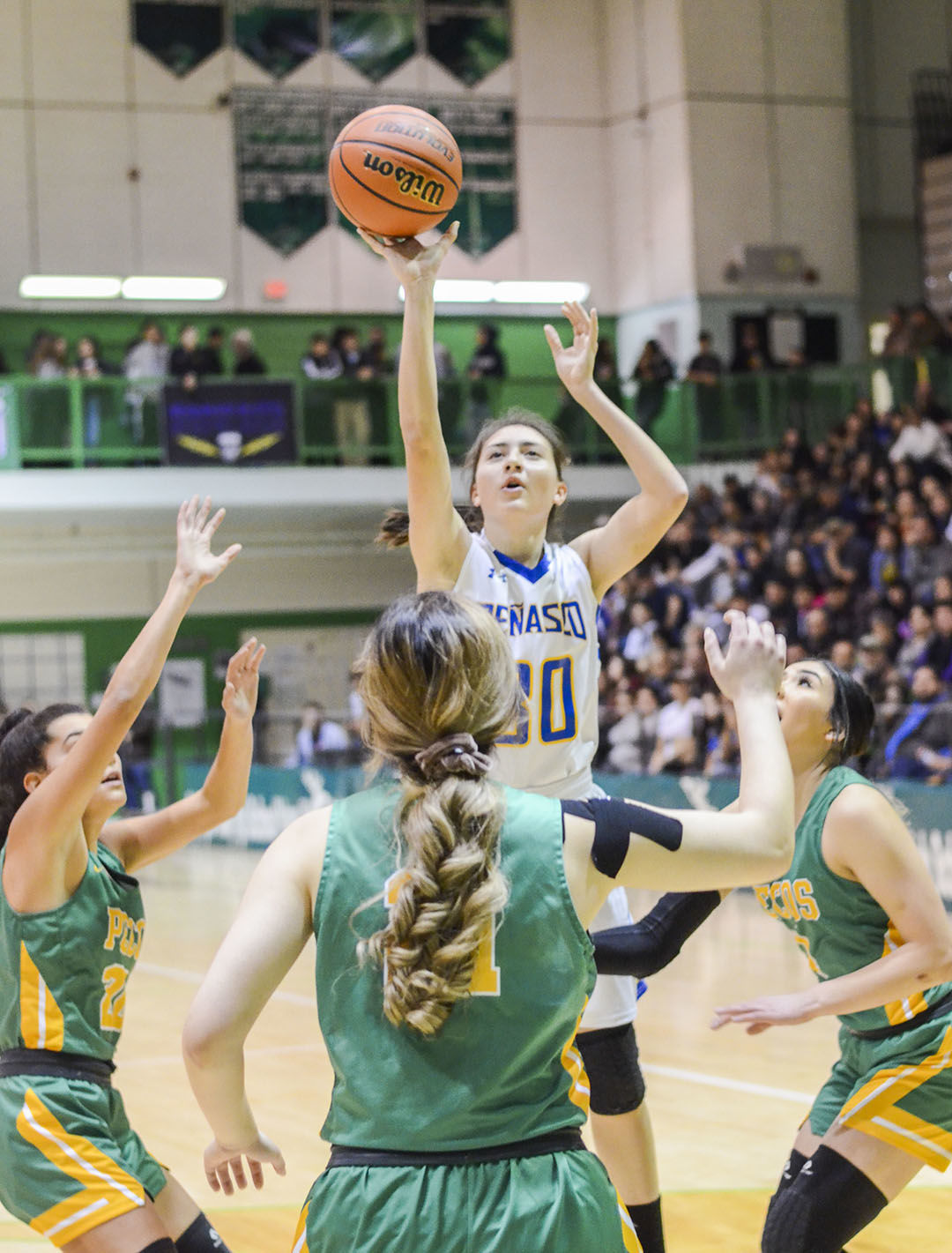 Peñasco’s Carly Gonzales shoots over a trio of Pecos defenders during Peñasco’s 57-40 win in the NRG Tournament championship game on Jan. 4 at Ben Luján Gymnasium. 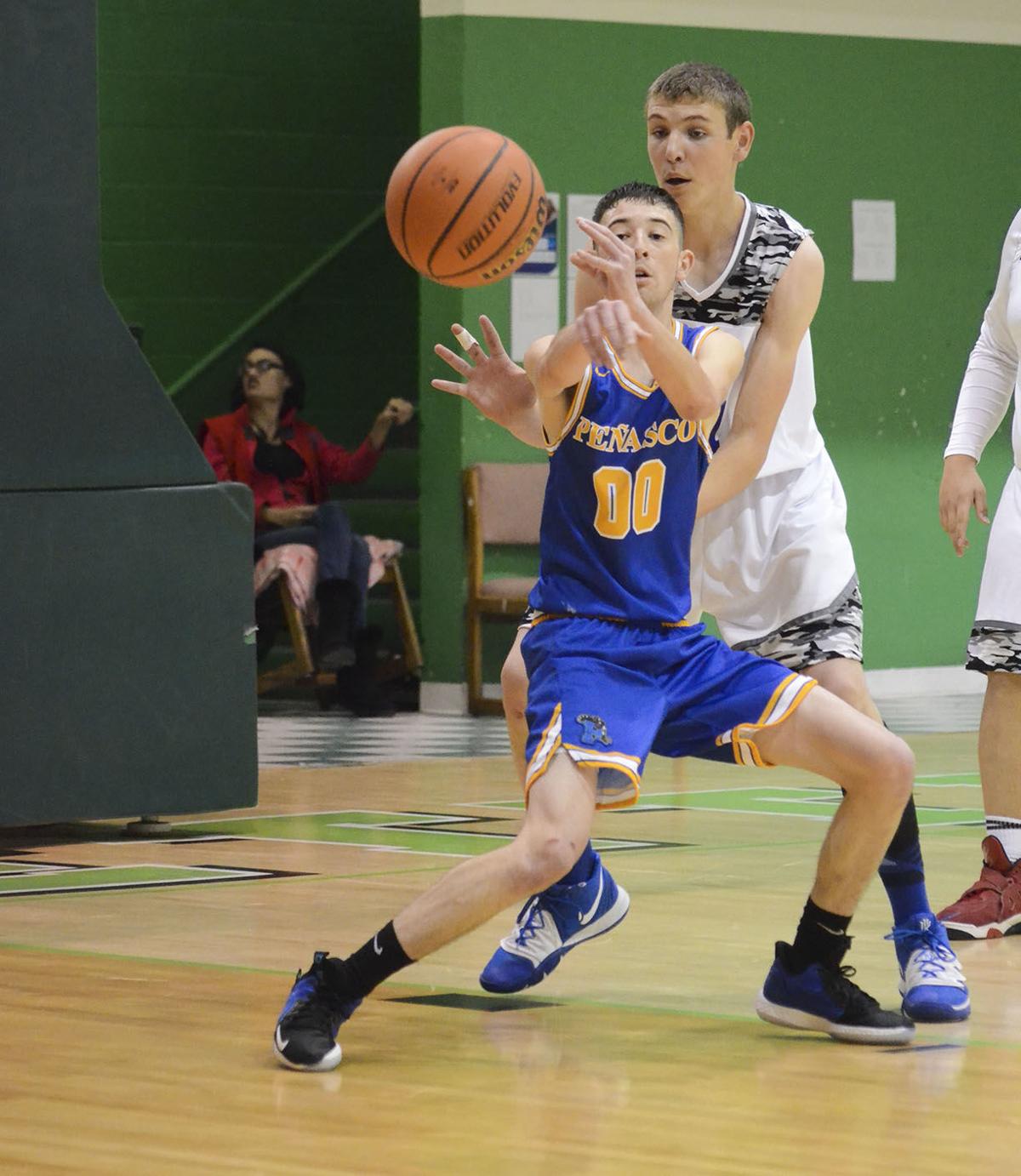 Peñasco’s Dominic Lopez passes to the perimeter during the Panthers’ 63-42 win over Questa in the seventh-place game of the NRG Tournament on Jan. 4 at Ben Luján Gymnasium. 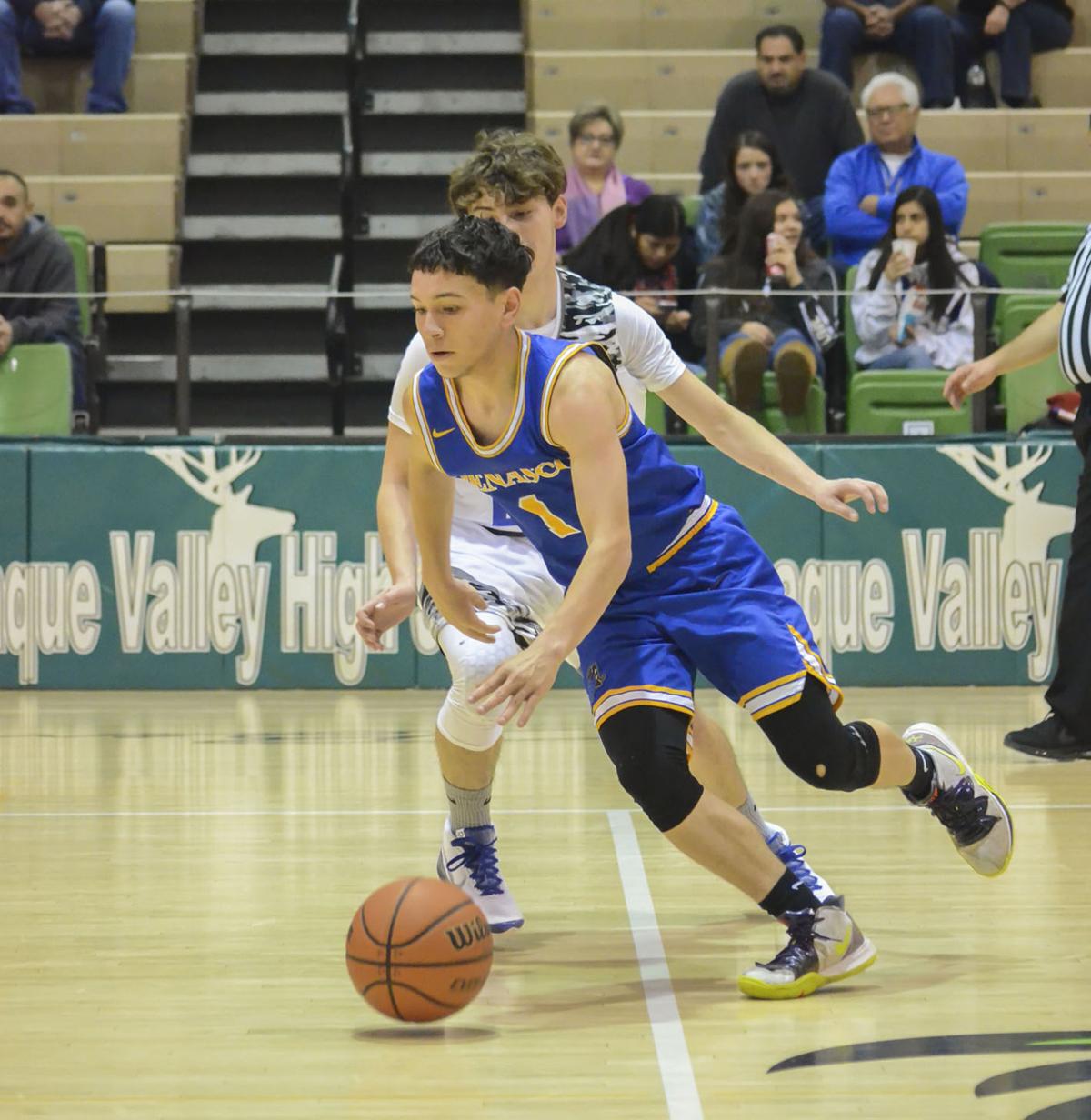 Peñasco’s Isaiah Padilla dribbles into the front court during the Panthers’ 63-42 win over Questa in the seventh-place game of the NRG Tournament on Jan. 4 at Ben Luján Gymnasium.

Peñasco’s Adrianna Tafoya shoots from inside against Pecos during Peñasco’s 57-40 win in the NRG Tournament championship game on Jan. 4 at Ben Luján Gymnasium.

Peñasco’s Carly Gonzales shoots over a trio of Pecos defenders during Peñasco’s 57-40 win in the NRG Tournament championship game on Jan. 4 at Ben Luján Gymnasium.

Peñasco’s Dominic Lopez passes to the perimeter during the Panthers’ 63-42 win over Questa in the seventh-place game of the NRG Tournament on Jan. 4 at Ben Luján Gymnasium.

Peñasco’s Isaiah Padilla dribbles into the front court during the Panthers’ 63-42 win over Questa in the seventh-place game of the NRG Tournament on Jan. 4 at Ben Luján Gymnasium.

In what was primed to be a battle of all Lady Panthers ended up being no battle at all, instead it was a runaway.

Ranked No. 2 in Class 2A, the Peñasco High School girls basketball team showed no mercy against their Lady Panther counterparts from Pecos High School on Jan. 4 in the girls championship of the Northern Rio Grande Tournament.

From the opening tip until the final buzzer, Peñasco (11-1) proceeded to control the game and triumph over No. 4 Pecos, winning 57-40 inside Ben Luján Gymnasium on the campus of Pojoaque Valley High School to secure the NRG championship.

The win served as some payback for Peñasco to push Pecos’ way, who not only defeated Peñasco in last year’s NRG final, but also did so in the 2019 Class 2A state semifinals at the Santa Ana Star Center.

After the latest meeting, now the Peñasco players can move forward and begin to write a new chapter.

“We knew the historical aspect of this tournament and it was big for my team in particular,” Peñasco head coach Mandy Montoya said. “I told them they were going to write their own story and their story didn’t end very well last year. Tonight was big, the crowd was big and it was fun.”

As fans jam-packed Ben Luján Gymnasium for the third-place and championship games, Pojoaque officials were forced to expand the gymnasium’s westside bleachers to accommodate for the growing crowd.

Those who leisurely moseyed in for the nightcaps were treated to the heavyweight who is Peñasco, as it grabbed a 19-14 lead after a quarter of play and built a 27-17 lead, its first of double-digits, with 5:15 remaining in the first half after sophomore wing Maricela MacAuley converted a layup in transition.

The score was 36-20 at the break, and the second quarter success continued after halftime, as Peñasco constructed an 18-0 scoring run over the second and third quarters. That run did not end until Pecos’ Trinity Herrera knocked down a pair of free throws with 2:30 remaining in the third, which were Pecos’ first points of the quarter.

At that point, Peñasco led 47-20 and they would stretch the lead to as large as 25 points in the second half. Peñasco held Pecos to scoring quarters of six, 10 and 10 after the 14-point first.

“We were determined to come out strong and stop them,” Peñasco senior guard Adrianna Tafoya said. “Our play on defense was strong and it was contagious.”

Montoya credited the 18-0 run to her team’s predator mentality she’s been preaching all season.

“We want to be in attack mode and I’ve been challenging these girls since day one to have this mentality that when a team is down, you have to put them away,” she said. “That’s what separates the good teams from the great teams. Good teams tend to let teams stick around and get back in the game, but great teams separate themselves.”

While a lot of Peñasco’s separation was credited to their defense and Pecos’ cold shooting, offensively, they received 22 points from Carly Gonzales, 11 from Tafoya and 10 from Martina Tafoya.

Herrera was Pecos’ lone scoring option and aside from her game-high 25 points, only two other players for Pecos (Desiree Sena and Savanah Ortiz) combined for three additional field goals the entire night.

Montoya credited her team’s size in Gonzales, Naomi Snake, Jennifer Aguilar and Ariana MacAuley as a big reason for Pecos’ struggles putting the ball in the net.

“I think what the rest of the state doesn’t have is our size,” Montoya said. “We were trying to be big and wall up to make them shoot over us. If they make it, they make it, but it’s tough to shoot over those guys down there.”

Before the championship, Peñasco was challenged by Escalante High School in the semifinals on Jan. 3, and although they would eventually win by a final margin of 53-37, Montoya said her team probably only played three-and-a-half minutes to their caliber in that game.

Adrianna Tafoya said there was plenty of motivation to carry over to the Pecos game to avoid a hangover.

“We talked about that game and we knew we didn’t want to play another game like that,” she said. “That helped bring us out even stronger tonight and it was all mentality. You have to give Escalante credit because they did improve, and we weren’t ready for that.”

After a first couple of rough days for the Panthers at the NRG, Peñasco was fortunate to run into a team who had an even more dooming first 48 hours.

The Questa High School boys basketball team, losers of a combined score of 180-44 over the first two rounds against Pecos and Dulce high schools, suffered from similar struggles in the seventh-place game, as Peñasco cruised to a 63-42 victory on Jan. 4 inside Ben Lujan.

The narrative of the Wildcats’ struggles surfaced almost immediately, as the Panthers rallied off the first eight points of the game and held Questa scoreless until 3:55 remaining in the first quarter when Eugene Jackson finally knocked down a bucket.

Peñasco played confident and loose in the first quarter and pushed its lead to 29-14 at halftime.

In the third quarter, Questa didn’t help itself by turning the ball over on its first five possessions, mistakes Peñasco used to conduct a quick 7-0 run to start the quarter, and that burst featured a 3-pointer from the corner from Elijah Lucero, which was followed by a strip and steal that was converted into a layup by Dominic Lopez.

Lopez’s theft and bucket increased Peñasco’s lead to 38-14 with six minutes remaining in the quarter, and Peñasco would go onto outscore the Wildcats 19-9 in the stanza to take a 50-23 lead into the final eight minutes.

Lucero carried the Panthers with a game-high 18 points, scoring 16 of those over the first three quarters. Isaiah Padilla went scoreless over the first 24 minutes but provided eight points (5-of-7 from the free throw line) in the fourth, while Lopez and Danny Esquibel provided 11 and nine.