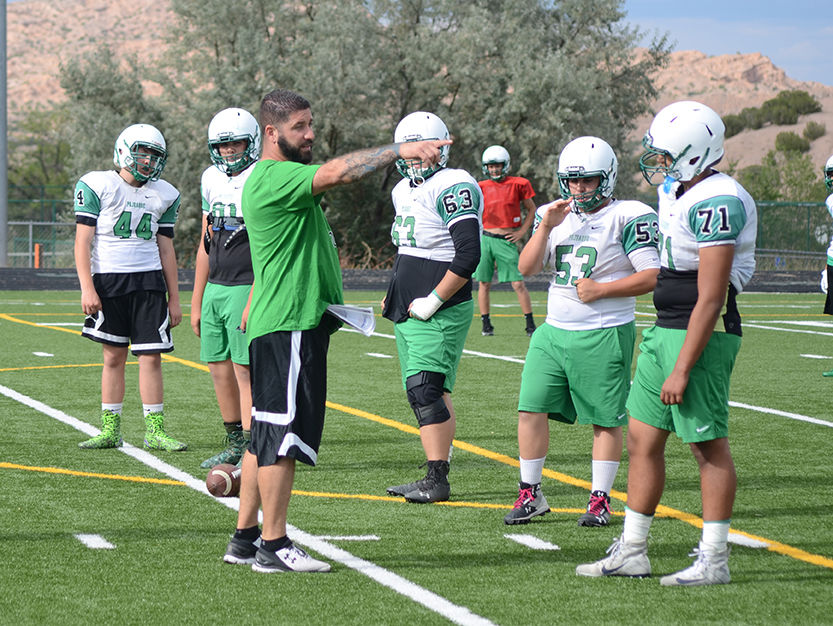 Pat Mares was officially hired as Pojoaque’s head coach on Monday after serving as the interim since Jorge Oropeza resigned in late July. Superintendent Mel Morgan said in an email that Mares was “the unanimous choice.” 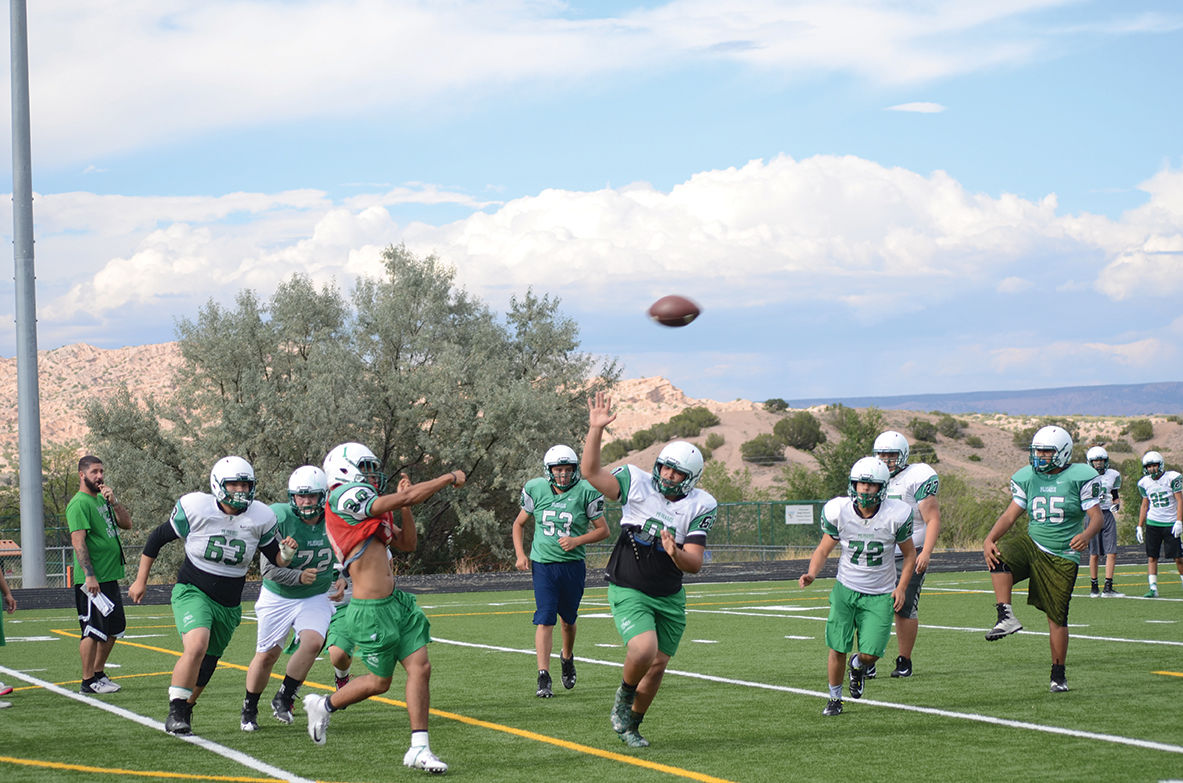 In order to turn around their fortunes from a 1-9 campaign in 2017, the Pojoaque Valley Elks hope their defense continues to make strides before the season opener at 7 p.m., Friday, at Capital High School. Here, quarterback Devonn Leyba-Holmes manages to get a pass off against a defense that was in hot pursuit during most of the Aug. 17 practice.

Pat Mares was officially hired as Pojoaque’s head coach on Monday after serving as the interim since Jorge Oropeza resigned in late July. Superintendent Mel Morgan said in an email that Mares was “the unanimous choice.”

In order to turn around their fortunes from a 1-9 campaign in 2017, the Pojoaque Valley Elks hope their defense continues to make strides before the season opener at 7 p.m., Friday, at Capital High School. Here, quarterback Devonn Leyba-Holmes manages to get a pass off against a defense that was in hot pursuit during most of the Aug. 17 practice.

The school announced the hiring Monday morning, officially removing the interim tag from his name, and just in time for the beginning of the new gridiron season.

“I wasn’t too worried about what was happening in the central office,” Mares said about coaching in limbo the past two weeks. “I had to get these kids ready to play regardless. I am releived it is set in stone and we can go on and feel comfortable with what we are doing and the concept of the team.”

Mares will have his hands full coming off a 1-9 season. The Elks entered the start of the 2018 campaign with just 13 players and thankfully, through Mares’ efforts and enthusiasm, that total has grown to approximately 30 as Friday’s season opener at Capital High School approaches.

Capital will be a tough, early litmus test, as they come off a playoff season in Class 5A and many believe they could be even better this year.

“If we prepare the way we should prepare for Capital High School, we will put ourselves in a position to win the game,” Mares said. “(Capital) has a couple of good running backs and they don’t throw the ball that much. Our defense is going to be fine if we prepare the right way.”

Mares said that his coaching staff is behind him and with the roster growing from 12 to 30 players, he “can’t lie too much that it’s not getting positive feedback from the players.”

“I’ve been around football for nine years (as a head or assistant coach) and I’ve always controlled a team in the same way: With the discipline, the structure, the respect,” Mares said. “I am applying it to myself, but the kids have to learn this concept. Once they learn this concept, the success will come.”

The one thing Mares has focused on is keeping his very, young team – more than two-thirds of the squad are freshmen and sophomores – on task and focused on what’s in front of them, while worrying less about the offseason drama and Oropeza’s badly-timed departure.

Mares has made the players inaccessible to the media for the first few weeks to help maintain that focus he is aiming to see develop.

“The big deal is that it was three weeks before the first game,” he said.

Despite their youth and having to deal with so much these past few weeks, this young team has caught the eye and appreciation of Mares.

“Our numbers are getting better and if we get 10 more dudes, our guys will be sitting pretty,” Mares said. “I am super happy with the team’s progress the last three weeks. We have a bad practice every now and then, but we try to have short-term memory loss to forget that bad practice. We want to be better at what we are doing, at our trade.”

They are also working on keeping injuries to a minimum, as they have started to creep in, especially with the low numbers.

Mares is pleased with the team’s offensive attack and the speed which is “ridiculous” while keeping the spread in place that they’ve run for the past few years.

Defensively, they will run mainly, a five-man front with some changes to come depending on how the game flow dictates.

If the pattern continues of even-year performances, this fall could see the Elks bounce back from last year’s disappointment that saw only a lone 8-6 win over Santa Fe Indian School.

But they will have to do it in a revamped District 2/5-4A with teams like Española Valley, Taos, Bernalillo and a sneaky-good Grants High School, along with favorites St. Pius X.

“Any win is going to be big,” Mares said.

As a former Coach from the valley I would like to say I think Pojoaque made a good choice with hiring coach Pat he has the right approach on what he wants to do with his team I have worked with coach Pat and he has the interest of the kids in his heart I think he will bring pride to our school with given time.