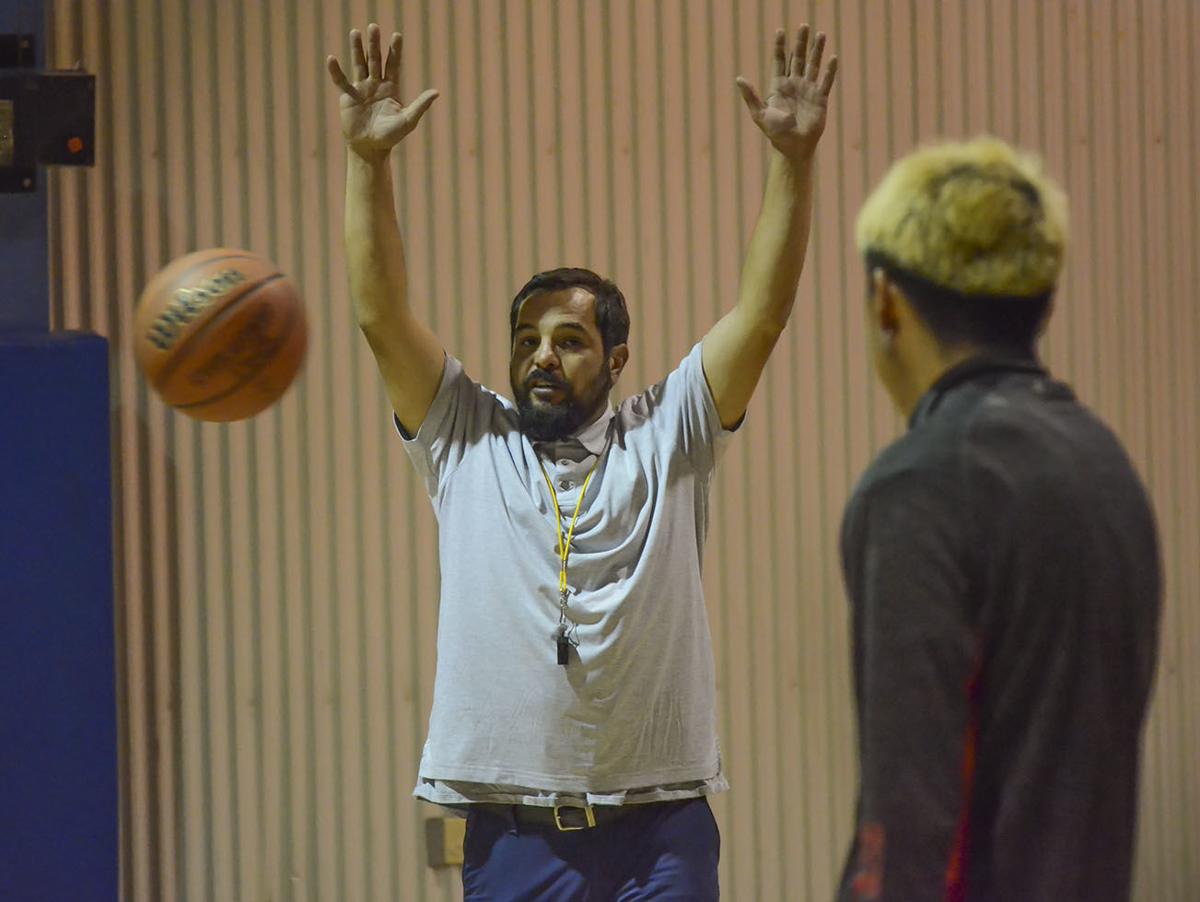 Dulce athletic director and head boys basketball coach Jesus Maes runs his team through practice drills on Nov. 20 at Dulce Elementary. Maes returns to coaching after taking a year off after being fired as the Española Valley football coach seven games into the season in 2017. Maes was a 1995 graduate of Dulce. 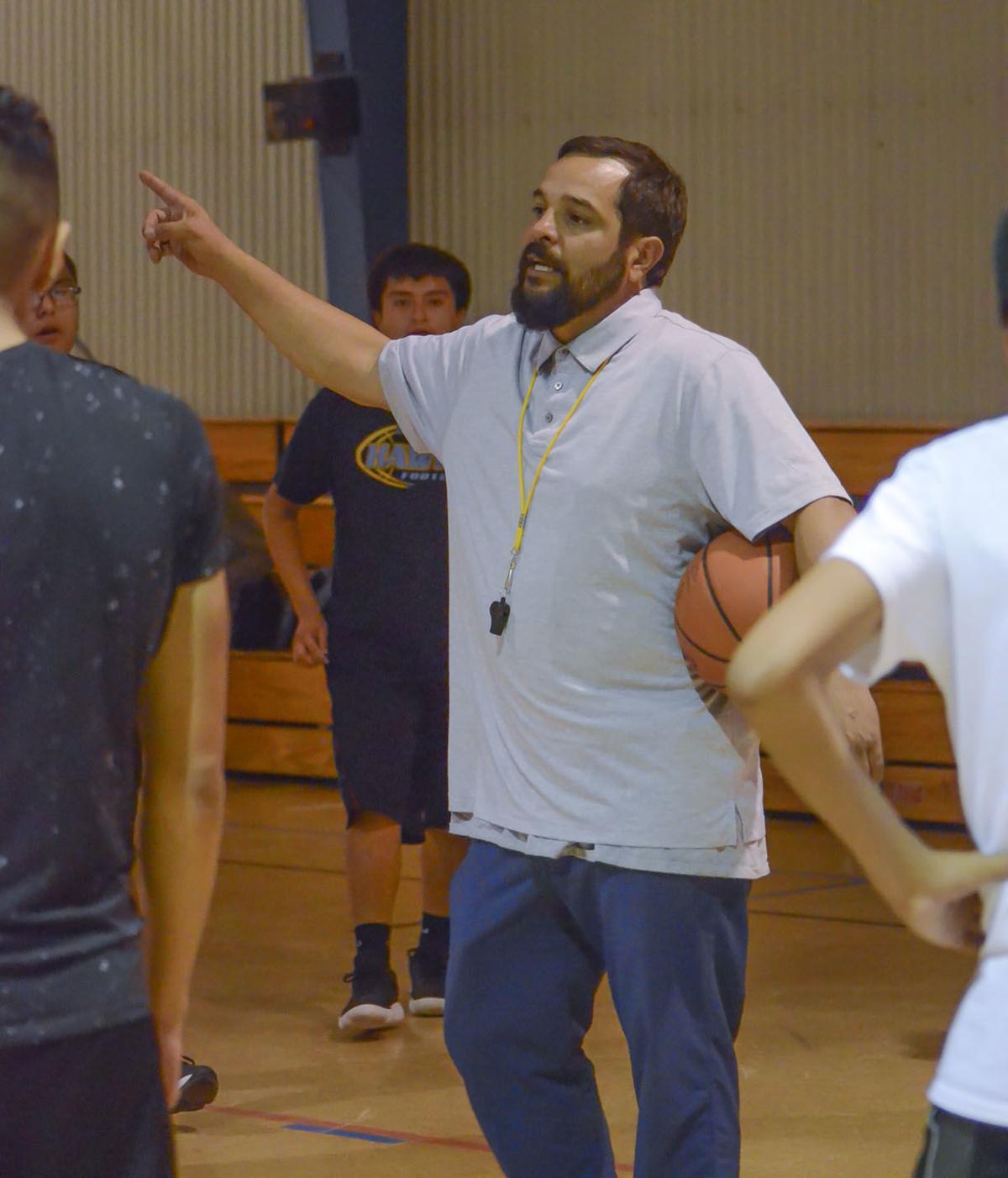 Dulce athletic director and head boys basketball coach Jesus Maes runs his team through practice drills on Nov. 20 at Dulce Elementary. Maes returns to coaching after taking a year off after being fired as the Española Valley football coach seven games into the season in 2017. Maes was a 1995 graduate of Dulce.

Jesus Maes has been all around the block — the block that is Northern New Mexico high school coaching.

Of all the stops he’s made from Albuquerque, Dulce, Escalante, Cuba to Questa to Española Valley high schools, Maes is back again at his roots.

After a year off spent to work on himself and his family, the 1995 Dulce graduate is back with the Hawks, this times as the school’s athletic director.

During his year away from athletics, coaching and teaching, Maes gave birth to a son and started his own business, both things he credited to his departure from Española Valley in 2017.

Maes took over the Sundevils’ football team in 2016, but he never finished his second season, as then-Española athletic director Paul Roybal demoted him seven games into the season after Española compiled a 2-5 record.

Maes said it was one of the most stressful situations of his career, mainly because he began to second guess himself about leaving Questa, where he had been the football coach and athletic director for four years prior.

“That one really broke me because I thought I did everything right and I was there for the kids,” Maes said. “I was down, but it turned out to be a blessing in disguise because it gave me a chance to focus on my family and start a family. It was like one door closed, but two more opened.”

The next biggest reason why his firing was a blessing in disguise? Look no further than north up Hawks Drive leading to the campus of Dulce High School.

Maes now has the opportunity to walk those halls again, but he did need a little convincing from some of his role models to take those steps.

“When Dulce came calling, I had a few conversations with Tom Manning from St. Mikes (athletic director) and the late Benjie Apodaca, the culinary arts chef from Taos,” Maes said. “They both told me I should get back into it, so it was my mentors that helped me get my vision and my purpose back. The Dulce job came up and it was just an opportunity I couldn’t pass on.”

Now head of the Hawks’ and Lady Hawks’ athletic programs, Maes hopes to bring back the tradition and the success Dulce teams had in bulk in the 1980s and 1990s.

“We need to get back to where we were when we were relevant and competing for championships,” he  said. “We’re going to get coaches in place that run an offseason, are willing to fundraise and do all the little things you need to do to be successful. We need to catch up to the Joneses, and that might take a year or two.”

Not only is Maes working as the athletic director, but he’s also taken over as the boys basketball coach for the 2019-20 season. His right-hand man on his coaching staff is Abe Trujillo, who is also a 1995 graduate of Dulce.

“I think It’s something special that he’s now the AD,” Trujillo said. “He’s dedicated and he gives it his all. He’s from here and he wants better, and he’s not knocking or putting anyone down from in the past, but he really wants to bring back discipline, hard work and accountability.”

The two played basketball and football together for the Hawks during their time at Dulce, and were competitive friends on and off the court and field.

“I’m so happy to be doing this with him because we grew up loving sports,” Trujillo said. “We have the love for the game and we were always competing in something: backyard football or whatever. It’s so awesome to have him back here where he graduated from.”

Maes was quick to point out the late success of the school’s volleyball team and the momentum it has already provided at the start of his tenure. The Lady Hawks reached the Class 2A championship in 2018 and the semifinals this season, finishing with a 24-1 record.

The goal is for all sports teams to become annual competitors, and despite being the basketball coach, Maes was extremely passionate when talking about Dulce football.

The Hawks’ season in 2018 was canceled due to lack of participation, and this year Dulce competed in 8-man football and finished with a 1-5 record.

Maes’ first stint at Dulce was in 2010 as the head football coach, where he guided the Hawks to a perfect 5-0 mark in District 1-2A to claim the District championship.

The next season, Maes left to become the head coach at Cuba, but the Hawks he helped harvest repeated as District champions again in 2011, finishing with a 9-2 overall record and 6-0 record in District play.

It was the last winning season Dulce football has tasted to date.

“The potential in football and all the sports is there,” Maes said. “Hopefully, me now being here for the third time, and first time as the athletic director, I want to bring this athletic program back to the 90s and 80s when Dulce was relevant. I want Dulce to be recognized for their athletic ability and professionalism.”

Maes and the Hawks basketball team tips off their season on Dec. 3 at home against Tohatchi High School. Maes will try to improve upon the Hawks’ 16-11 record in 2018 (missed state tournament) under former coach Shane Valdez.

This is good news. Best wishes to coaches and players. Go dirty birds!