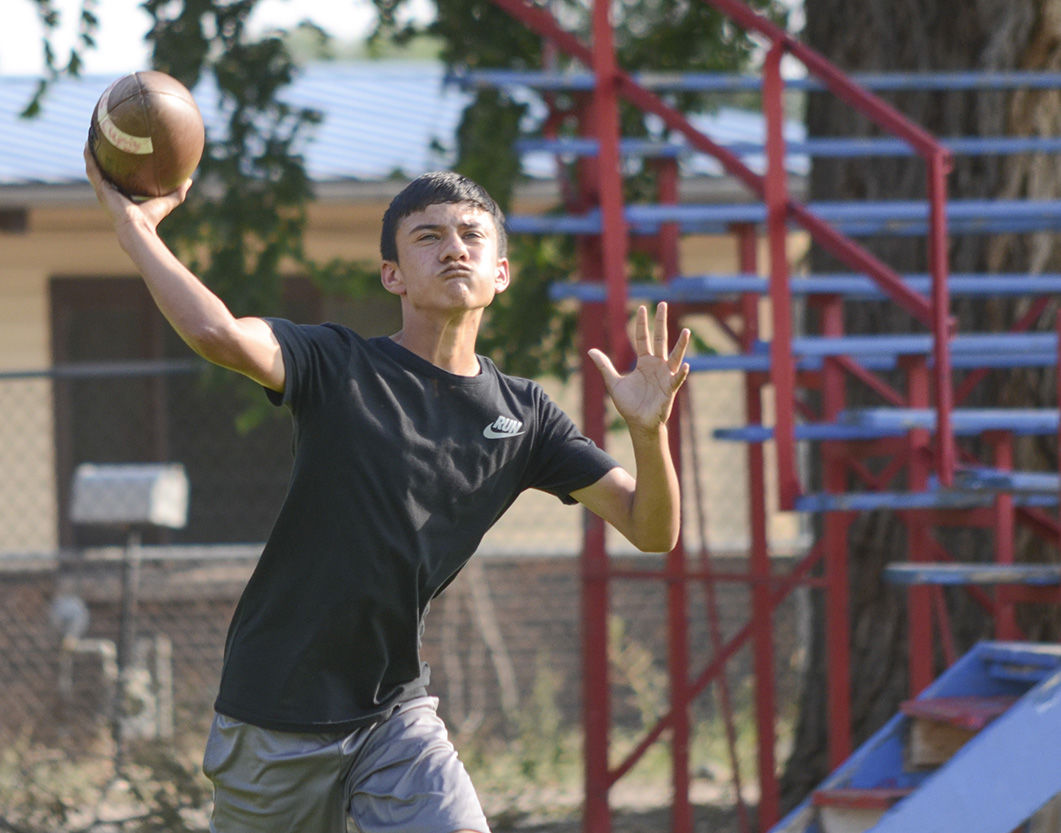 McCurdy sophomore quarterback Santiago Samora warms up his arm in two-a-days Aug. 8. Samora returns under center after missing a majority of his freshman season with fractured ribs. 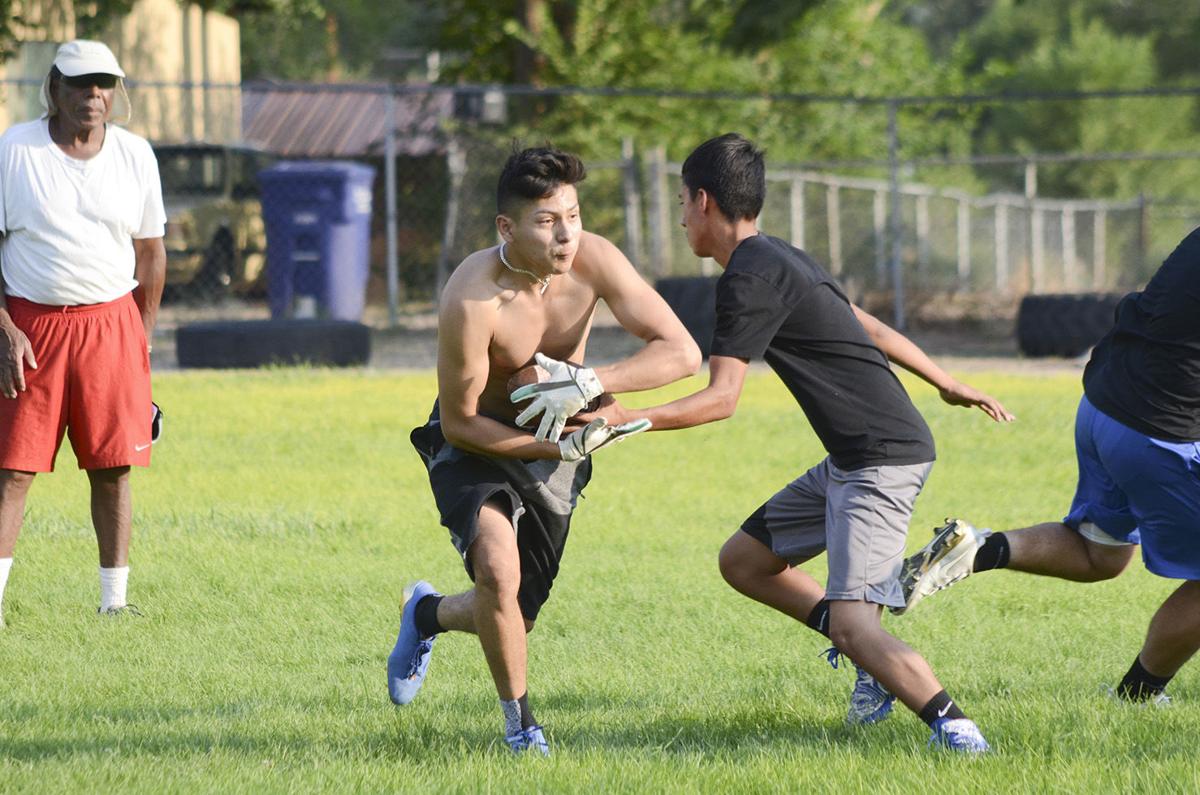 Raul Arroyo (left) will do it all this fall for the Bobcats. The senior will play running back, wide receiver, defensive back and also serve as the team’s kicking specialist. Arroyo was fourth in the state for Class 2A in tackles in 2017 (110) and made a field goal from 45 yards.

McCurdy sophomore quarterback Santiago Samora warms up his arm in two-a-days Aug. 8. Samora returns under center after missing a majority of his freshman season with fractured ribs.

Raul Arroyo (left) will do it all this fall for the Bobcats. The senior will play running back, wide receiver, defensive back and also serve as the team’s kicking specialist. Arroyo was fourth in the state for Class 2A in tackles in 2017 (110) and made a field goal from 45 yards.

Santiago Samora was only able to quarterback the McCurdy Charter School Bobcats for two games last year as a freshman before his season ended due to fractured ribs.

Now, the sophomore will return under center with a plethora of weapons at his disposal.

Ernesto Martinez was forced to play quarterback in Samora’s absence in 2017, but now the speedster, who finished second in the 100-meters at state this spring, will primarily play receiver on the outside.

“I’m happy because Ernesto gets to move back to one of our wideouts,” Samora said. “He’s really fast and has good hands. Sometimes last year, we relied too much on Jacob, so the defense was able to adjust right away and we didn’t have anyone else to throw to.”

Jacob Martinez gives Samora a large target at 6 foot 2 to go alongside the faster players.

Jacob Martinez said there shouldn’t be any problems with his young, relatively inexperienced quarterback.

“He’s young, he’s small, but that kid is tough,” he said. “At his age, I  trust him to be a good quarterback. He’s starting to become a leader.”

Brandon Lovato, one of the team’s other leaders will play the fullback position.

“Brandon Lovato is the bruiser of ‘em all,” assistant coach Nelson Valdez said. “He’ll also be at linebacker and serve as the backup quarterback.”

Despite the promise at the skill positions, all of the McCurdy coaches agreed the offensive and defensive line will be improved in 2018.

The security the line should bring will give offensive coordinator Cecil Brown the option of passing the ball more out of his offense, which will primarily run the spread, I- and diamond formations.

“We’ll run veer option out of all those formations with Ernesto and Raul being the go-to guys,” Brown said. “The line should be tough. Now they’re seniors and they learned the hard way in the trenches. Now, I hope all these guys can apply what they learned last year and we should be able to run the football and pass more often when we need to.”

Gallegos said he expects the offense to be 50-50 run-pass.

“If we start out strong with the run and once they key onto it, well go to our pass whether it be short or long,” he said. It’s not going to be one of those specialized offenses, it’s just going to be something you need to prepare for. If you don’t, alright, good luck.”

The Bobcats will once again find themselves in Class 2A after spending the last two seasons in 3A.

“We should have never gone up to 3A, we should have always been 2A,” Gallegos said. “But, we competed in 3A, you know, that’s not bad. We took our bruises, now we’re still going to play a tough schedule and a lot of our pre-district schedule are teams (classified) above us, so will get some good kudos when it comes to playoffs and when state selections come around.”

The Bobcats play Laguna-Acoma, Santa Fe Indian School and Cuba from 3A, as well as Pojoaque Valley High School from 4A, all in four consecutive weeks.

Although from bigger classifications, those four teams combined for only a 11-30 record in 2017.

Though not his hardest working, most dedicated team, Gallegos believes this could be the strongest group he’s coached in his four-year stint at McCurdy.

“Two years ago I had a group that was solid,” he said about the 2016 team that finished 6-6 and won a first-round playoff game at Crownpoint High School. “They were dedicated and they showed up every day. This group, they’re talented, but they don’t have the work ethic that other team did. But, once we get all together we will be fine and be fighting for the district title.”

“Our advantage will be playing at home during the day in the heat,” Gallegos said about the home-stand. “Those other teams are use to playing on Friday nights.”