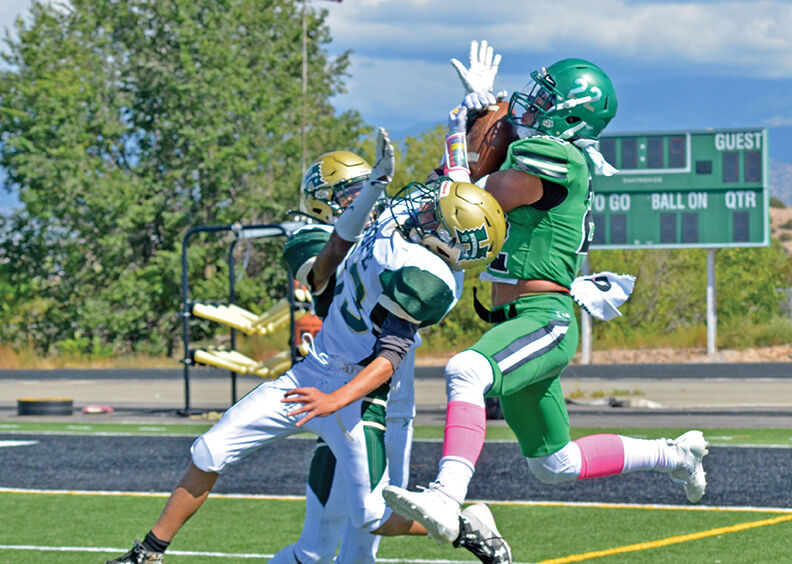 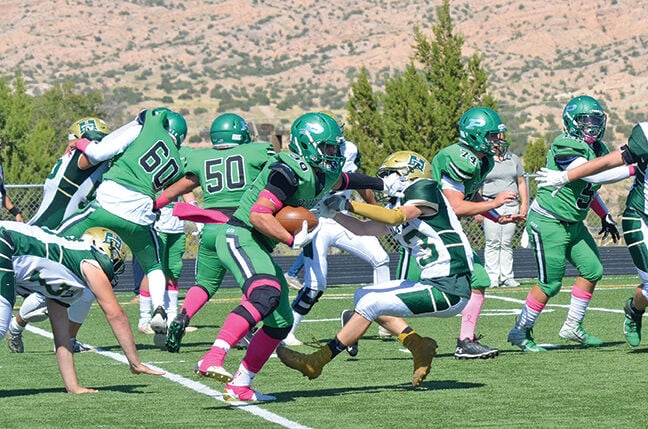 A cloud hangs over the Pojoaque Valley High School football team at every game.

Five players continue to fight a two-week school suspension in court, and have already stalled out the suspensions for three weeks. The suspensions were originally given for Sept. 15 to 28, and would have included the Elks’ homecoming football game and all related activities.

The Pojoaque School District and attorneys for the players agreed to vacate court hearings between Sept. 21 and Sept. 27.

On Sept. 17, District Judge Matthew Wilson ruled in favor of two guardians for students, granting a temporary restraining order against the suspensions, writing that the District was required to have a hearing with a chance for students to respond or to appeal.

In response, the District lifted all of the suspensions until an investigation could be completed.

After the game, coach Pat Mares declined an interview while running to the locker room.

If a court does rule against them in the coming weeks, those suspensions could cost the Elks key players in district games, or even the state tournament.

In their game Oct. 2 against Hope Christian (4-3), the Elks (4-2) came to life in the second half, but their defensive struggles, especially in the first half, sunk the team.

“We played a hard game today,” said senior running back and linebacker Dominic Esquibel. “It’s just the mental mistakes that we’ve made. And I think we made a lot of those mental mistakes, and that’s what slowed us down.”

They were down 18-0 at halftime, and 28-0 in the third quarter. But they fought back to within 13 points in the fourth quarter, and then almost recovered an onside kick while they held the momentum with a chance to get even closer.

Esquibel said the gameplan was to key the defense on stopping quarterback James Jenkins, and that allowed the Elks to be burned by other talented Huskies, who were stronger than Pojoaque anticipated.

“I lost this game,” Mares told the team in a postgame huddle while pointing at himself. He said he expects everyone on the team, from players to coaching staff, to take personal responsibility for the loss.

He compared the way they played in the second half to the team’s other loss, when Highland scored the first 14 points and at one point led 30-7, before Pojoaque ended the game with 12 unanswered points and rallied in the late minutes.

“We can’t play like this,” Mares told the team.

Hope Christian scored a touchdown on their opponent drive. In response, Pojoaque drove into Hope territory, but a third-down sack forced a punt, and the Huskies scored again soon after to take a 15-0 lead.

Down 18-0 in the second quarter, a stellar contested catch by D’sean Martinez brought the Elks to the 9-yard line. But quarterback Adam Pacheco threw an interception at the goal line with eight seconds remaining. (The ensuing kneel was the only drive of the first three quarters where the Huskies did not score.)

Starting with the ball in the second half, Pacheco threw a second interception, while the offense allowed a long return and committed a personal foul. On the next play, the Elks only had 10 men on the field while Jenkins ran for an easy touchdown.

On the next drive, Pacheco threw an interception on his third straight pass. The defense forced a stop, and Huskies kicker Logan Fuller made a 52-yard field goal, the 10th-longest in state history, giving the Huskies a 28-0 lead.

Pojoaque was without kicker Chris Holguin, who has been perfect on extra point attempts this year, as he rests a pulled hamstring.

Pojoaque’s next drive started with a 37-yard run by Jacob Sullivan on a reverse. Pacheco converted a fourth down to Derek Sanchez, and the Elks drove down to the goal line. The Huskies made three stops inside the 5-yard line, but on fourth down Esquibel broke through on an outside run and scored.

But it took just a few plays for the Huskies to respond and maintain their lead at 35-8.

By the fourth quarter, the crowd sounded more like a home game, cheering for Hope’s successes.

But Pojoaque continued to fight, with another long pass to Sanchez sparking a drive that indeed with a 23-yard touchdown pass to Martinez on a beautiful toe tap in the back of the end zone.

Then the defense made its first stop of the day, and Hope fumbled the snap on a punt for a turnover on downs in the red zone. Esquibel scored on the next play, 20th touchdown of the year (second-most in the state and top 15 in the nation among running backs, per Maxpreps).

The Elks attempted an onside kick, and appeared to recover but it had bounced off a player’s leg too shallow downfield. Hope Christian bled most of the clock and scored another long touchdown while Pojoaque had just 10 defenders in confusion.

Pacheco threw his fourth interception in the final minute, and that was that for a 20-point loss.

Pojoaque enters a bye week, where Esquibel says they plan to heal up and mentally prepare for district play.

Then, the team enters district play, starting with a tough road game against Moriarty (2-3) Oct. 15.

“I’m just looking forward to going out there and doing our job and staying focused,” Esquibel said. “Just doing what we know how to do.”