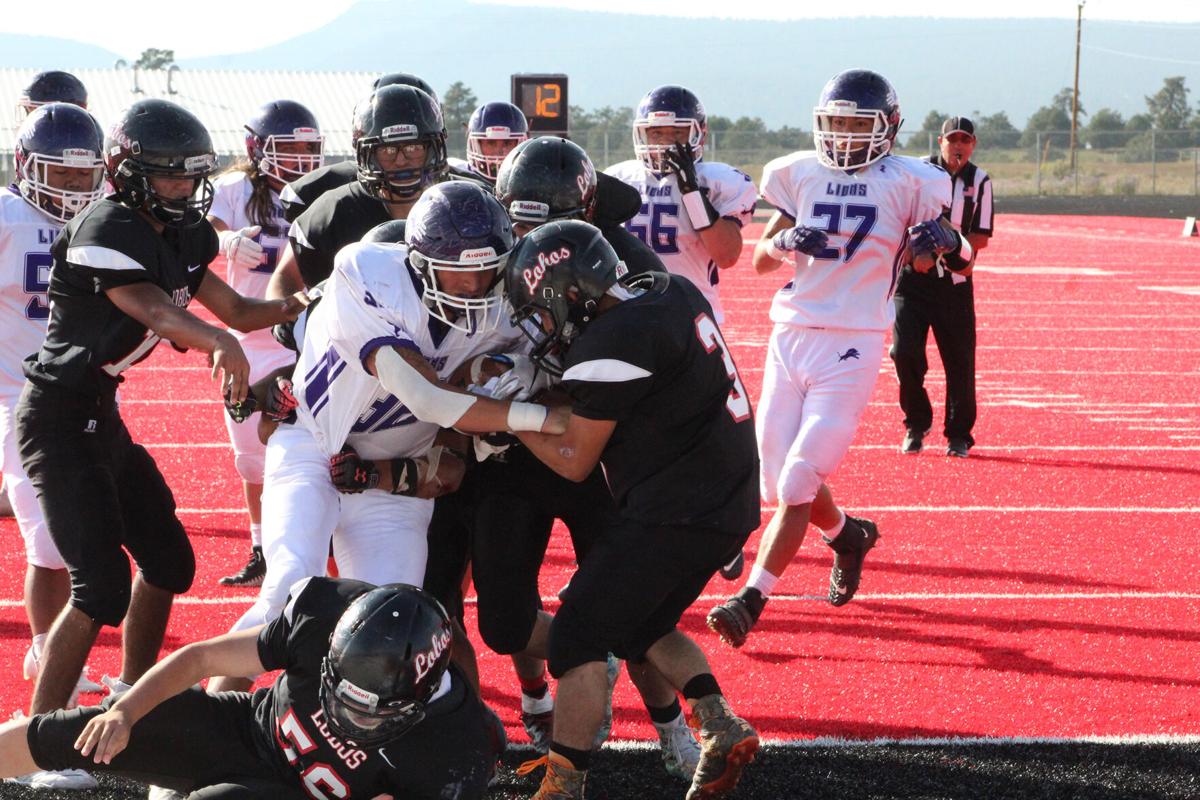 After being held scoreless to a Lions’ goal-line stance, the Lobo defense brings down running back Nate Rodarte for a safety. 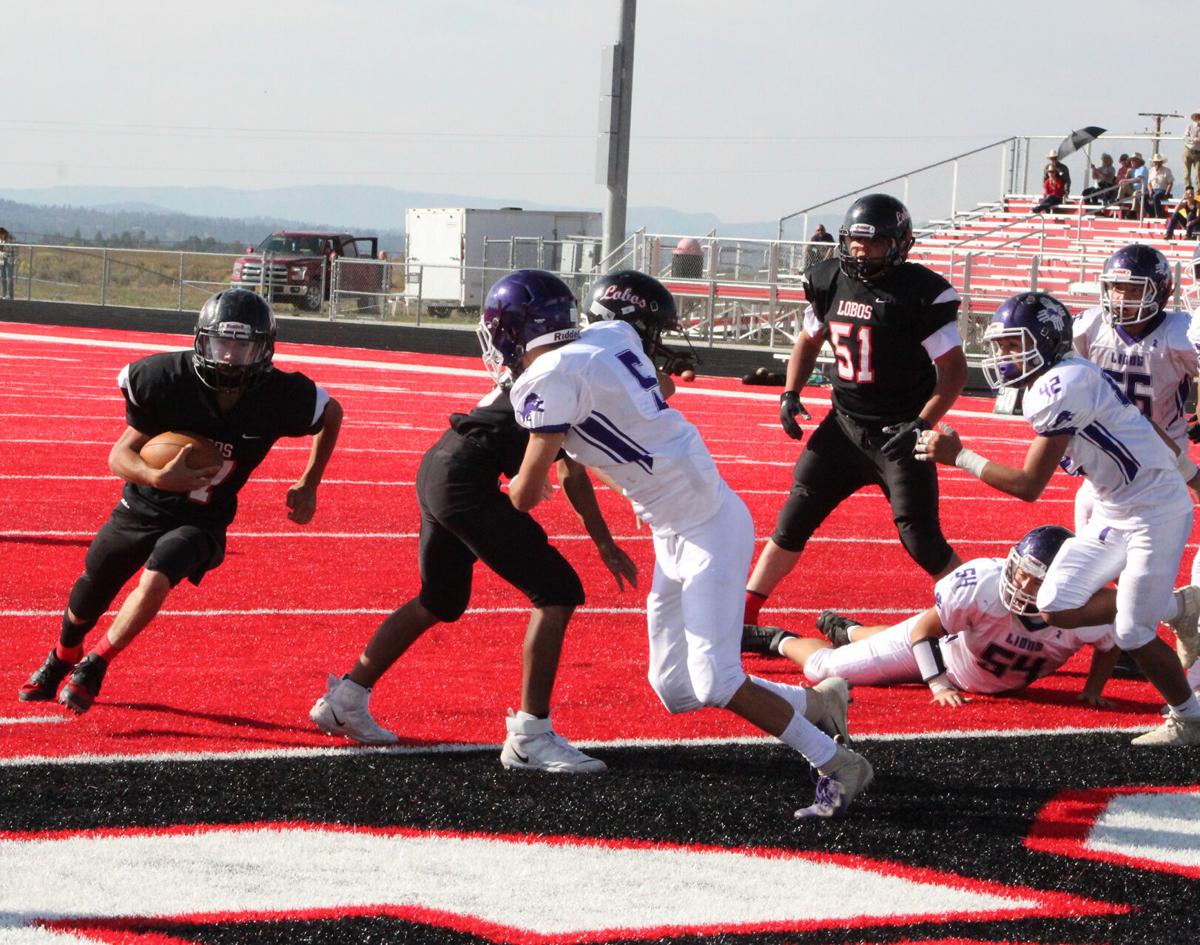 After being held scoreless to a Lions’ goal-line stance, the Lobo defense brings down running back Nate Rodarte for a safety.

Española Valley football dropped to 0-4 this year with a road loss to West Las Vegas (4-0).

On their first drive, the Sundevils took a sack and were forced to punt. on the opposite end, West Las Vegas scored on their first play, the beginning of a long night for the Española defense.

The game took a weird delay early on for Sundevil players to be given masks, which are required for all athletes and spectators at West Las Vegas.

The Dons ran for over 200 yards in the game on just 18 carries. They scored four times on the ground and four through the air, and added another score on a kick return.

Two Sundevil touchdowns kept the game going until the fourth quarter, when another score put West Las Vegas over the mercy rule threshold. Española continues their search for their first win of the season on Friday at Robertson (3-1).

The Lobos (2-2) battled hard but came up short against Santa Rosa (1-3), falling for the second straight week.

Escalante held the Lions to under 250 yards of offense in the game, but struggled to get in rhythm themselves, with four turnovers proving costly.

Santa Rosa scored on a run in the first quarter, and on another touchdown run in the second to take a 14-0 halftime lead.

Escalante answered in the third quarter to get within a score, and a safety brought them within four points.

Late in the fourth quarter, Escalante had the ball with a chance to take the lead and sneak away a victory. But Isaac Archuleta threw his third interception in the end zone, and the Lions took the victory.

Sophomore Trey Archuleta led the Lobos in rushing with 118 yards on 21 carries. Isaac Archuleta was 4-for-13 through the air with four interceptions, and he ran for just 24 yards on 19 attempts with a touchdown.

Next week, the Lobos will take on Raton (4-0) on the road as they continue to battle a tough nondistrict schedule.

McCurdy (1-2) fell behind big early in the game. The Yellowjackets (3-0) put up 24 points in the first quarter, then added 16 more in the second quarter to take a 40-0 halftime lead.

Clayton senior running back AJ Quintana hammered the Bobcats for 229 yards and seven touchdowns on the ground.

But McCurdy’s defense held stronger in the second half. Clayton scored one more touchdown in the third quarter, extending the lead, but the Bobcats did not give up. In the fourth quarter, McCurdy scored on a 28-yard touchdown pass, and added a two-point conversion.

The Yellowjackets as a team averaged nearly 10 yards per rush in the game, and that was the difference as two more scores ended the game with a mercy rule late in the fourth quarter.

McCurdy will have a tough matchup next week at Santa Fe Indian School (3-1) as they look to get back to a .500 record.

Escalante continued its hot start to the season this past week, advancing to 6-1 on the season.

The Lady Lobos take to the road this week, traveling Friday to Sanford, Colo. for a match, then facing Bloomfield (2-3) Saturday.

In between those two matches, Mesa Vista was swept by Reserve (2-2), 25-8, 25-15, 25-18. Their next match comes this weekend at the Santa Fe Indian School Pink Out Tournament, where they will compete in a pool against Taos, Hatch Valley, Wingate and Santa Fe Prep.

The Leopards’ next match comes Thursday (9/16) against Peñasco (1-3) on the road, and they face the Panthers again Sept. 21.

The Lady Hawks (0-5) took another straight-sets loss against a talented Broncos team (5-2), falling 25-17, 25-21, 25-20. Dulce will continue to look for their first win of the season as they slowly piece together what could be a talented team.

That streak came to an end Monday with a 7-1 loss to Evangel Christian (5-0).

This week, the Elks play Academy for Technology and the Classics (0-0) Thursday, and play at home against Bosque (5-2-1) on Friday.

Pojoaque girls soccer (3-4) came back strong from a two week break, taking down Santa Fe Indian School (0-8) 4-1 on Sept. 9 behind a hat trick from senior Anissa Herrera. In a Tuesday rematch, they again defeated the Braves, 4-0, with two more goals from Herrera in the shutout.

Pojoaque travels to Bernalillo (3-4) for a Thursday match, then plays Bosque (1-5) Friday.

The Bobcats (0-3) had their match against Monte Vista changed to Oct. 6, when they will play three matches in three days. Their next match comes Thursday (9/16) against Legacy Academy (5-3).