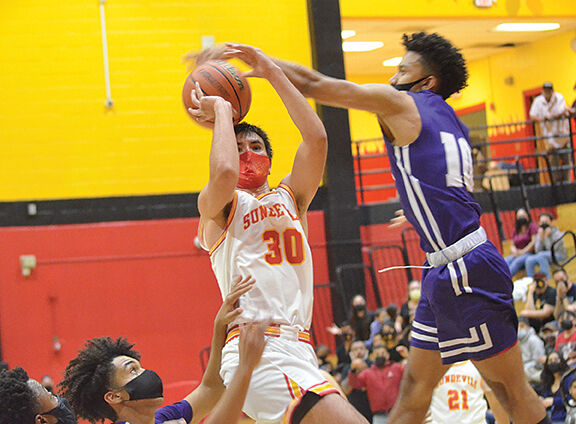 Española Valley High School’s Anthony Law (30) rises for a shot in the closing seconds of regulation, but is blocked by a defender. The Sundevils would go on to lose the game in double overtime. 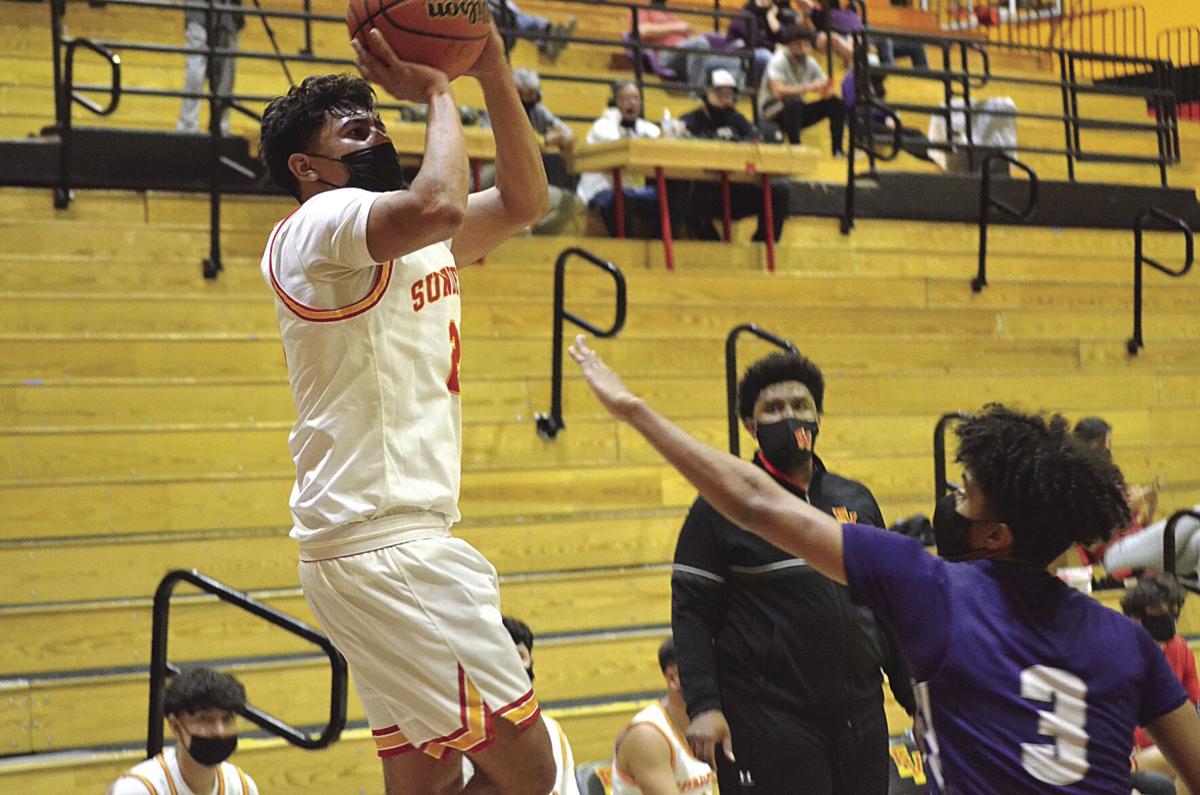 Española Valley High School assistant coach Chris Williams (black shirt) watches Jordan Duda (21) take a shot from the corner. Williams served as head coach for Gabe Martinez after Martinez was not able to be at the game.

Española Valley High School’s Anthony Law (30) rises for a shot in the closing seconds of regulation, but is blocked by a defender. The Sundevils would go on to lose the game in double overtime.

Española Valley High School assistant coach Chris Williams (black shirt) watches Jordan Duda (21) take a shot from the corner. Williams served as head coach for Gabe Martinez after Martinez was not able to be at the game.

Head coach Gabe Martinez had to miss the game, Española’s home opener, after an emergency, forcing Williams to step in as the team’s coach for the game. The Sundevils’ opponent was a tough team from Clovis that was a year removed from making the state quarterfinal and coming minutes away from knocking off the eventual champions.

“I’ve been a head coach before,” said Williams, who had coached the Pojoaque girls basketball program. “It was natural, I’m used to it. But it was fun being out there and coaching the boys.”

Williams filled in admirably, nearly outlasting the Wildcats as Española dragged the game into double overtime before eventually falling, 64-54.

“It was intense, I thought the boys battled,” Williams said. “But basketball is a game of possession and inches. And we came up a few possessions short.”

The Sundevils came out quickly in the first quarter, capping an early run with a block from Jayden Martinez as part of a 13-0 run, and taking a 16-9 lead.

A weird moment ended the first quarter, when a blurry part of the basket clock led to a Clovis player taking a half-court heave with 10 seconds left, and the shot went in anyway, cutting the deficit to 16-14.

Española kept the rhythm in the second quarter, scoring 14 points and taking a seven-point lead into the locker room.

Williams said he thought the defense played very well in the first half, only letting up 23 points which included multiple 3-pointers that he felt were lucky shots.

Through the second half, though, the Española defense started to allow points. Consecutive 3-pointers made it a 36-28 game, but from there Clovis went on an 11-2 run to end the quarter and take a lead at 39-38.

Early in the fourth quarter, a technical foul on Juan Branch after a charge call was his fifth, forcing Española to play the rest of the game without its starting point guard. Española led 50-47 in the final minute, but Clovis scored a basket and a foul to tie the game, and Anthony Law had his shot blocked in the final seconds, sending the game into overtime.

In the first overtime, both teams traded free throws early. Senior Matthias Garcia checked in for the first time in the game to play key minutes down the stretch. In a tie game, Española drew a charge with 2.5 seconds left. A full-court pass was batted out of bounds, giving the Sundevils a chance for a shot with 0.7 seconds, but they could not get a clean look, sending the game into double overtime at 54-54.

But early in the second extra period, the Sundevils allowed an open 3-pointer, and fell behind from there. They failed to score in the extra time, ultimately losing 64-54.

“We can’t afford to give open threes, and have lackadaisical defensive possessions,” Williams said. He said he thinks that 3-pointer then snowballed into a bigger deficit.

“I think it was a good turning point,” Jones said. “We played pretty good against these guys compared to the other teams we played.”

Junior Garrett May led the Sundevils with 14 points, while Joshua Coriz played important minutes late in the game and his scores helped send the game to overtime.

“As a team, we played better,” Williams said. “I don’t think any one person stood out more than the others; I think as a team, defensively, we played well. I would say our team stood out.”

More than 100 fans came to the home opener for the Sundevils, and were loud through the late stages of the game.

“It was a nice environment to play with the fans here,” Jones said.

The Sundevils next play Saturday to start district play hosting Los Alamos, and then on April 12 travel to Taos.