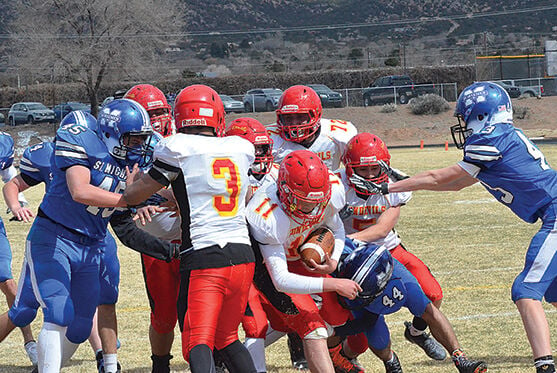 Española Valley High School quarterback Nate Chacon (11) breaks through the line for a touchdown in the third quarter. The touchdown run scored the first points of the season for the Sundevils. 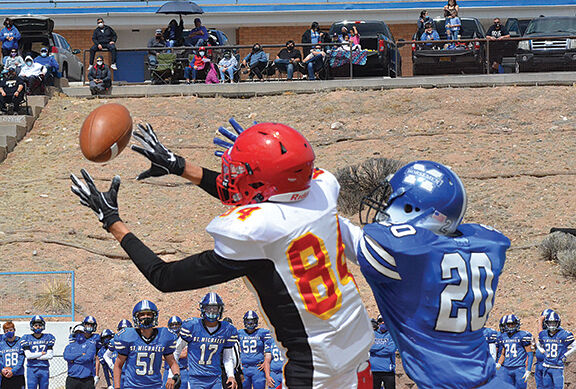 Wide receiver Matthias Garcia (84) makes a contested catch on the sideline in the first quarter Española Valley High School’s loss to St. Michael’s. While the Sundevils failed to score on that drive, it helped set up momentum for a touchdown later in the game.

Española Valley High School quarterback Nate Chacon (11) breaks through the line for a touchdown in the third quarter. The touchdown run scored the first points of the season for the Sundevils.

Wide receiver Matthias Garcia (84) makes a contested catch on the sideline in the first quarter Española Valley High School’s loss to St. Michael’s. While the Sundevils failed to score on that drive, it helped set up momentum for a touchdown later in the game.

The Española Valley Sundevils were down 41 in the fourth quarter against St. Michael’s with just over 10 minutes remaining, and had a fourth down pinned at their own five yard line when Coach Santiago Archuleta called a timeout.

Archuleta gave the team two options: they could either go for it, or could take an intentional safety to not give up worse field position, and he let the team decide between two plays he designed. The punter was injured earlier in the game, so that was not an option.

But if they took a safety, and the Horsemen then drove down to score again and converted an extra point, they could end the game on a mercy rule. The Sundevils were not ready to be done.

“It’s all about building their confidence,” Archuleta said, and he said he thought it was the right decision.

And while the Sundevils could not convert, and lost on the mercy rule two possessions later, they were happy to give a full effort with a competitive team and to score their first points of the season in a 6-60 loss at St. Michael’s on March 27 in their second game of the season.

“Today we fought hard, we fought really hard,” said sophomore quarterback Nate Chacon. “They just put in the work, they’re trying to get better. We’re very young, and I just appreciate the team for that.”

The Sundevils received the opening kickoff, but punted on their first two drives and quickly fell behind 12-0.

But the Sundevils started to gain momentum on their third drive. A good kick return set up good field position, and senior running back Aaron Altamirano converted a fourth down. A sideline catch from Jack Purdy brought the ball to the 27-yard line, and another good throw from Chacon to Matthias Garcia got them to the 5. But before Española could score, St. Michael’s intercepted a tipped pass at the goal line.

Archuleta said having three junior linemen back with the team helped the offense compared to last week.

Española kept pace against a talented, and larger team. David Sandoval forced a fumble on one drive, and later in the second quarter he recovered another fumble after a bad snap. But just before halftime, Altamirano, who had been strong running the football and was the team’s punter, injured his knee on a play and was out for the rest of the game. The Sundevils went into the half down 34-0, but made it into the second half without the mercy rule for the first time.

Throughout the first half, the Sundevils rotated between quarterbacks, which Archuleta said was because he wanted to give some rest to Chacon before he played in a junior varsity basketball game later that evening.

In the third quarter, down 40-0, Española finally made their run. Noel Hernandez blocked an extra point to give the team a spark. On the next drive, a good run and then a throw to Garcia got into Horsemen territory. Then a long draw run from Chacon added 20 more yards, and the Sundevils eventually fought down to the 5-yard line, when Chacon punched in a touchdown.

Chacon credits his team for opening the hole where he could score.

“Our guard and our tackle, they really pushed through for me,” he said. “When we went into the huddle, they said, ‘Follow me, I’ll get you there.’ It was a relieving feeling to get our touchdown on the board.”

Chacon said he was a linebacker last year, though he played quarterback in middle school, and was moved to be the team’s starting passer this year.

“I think it just reinforced that their offense can work, they can score,” Archuleta said. “When you’re going up against older players, it hurts their confidence a little bit when they can’t score. But when we put someone in their own age, and they were able to move the ball, it started to build their confidence.”

The game ended in the fourth quarter when, trailing 54-6, an interception was returned for a touchdown putting St. Michael’s ahead of the mercy rule threshold.

The energy was noticeable from the Española sideline with a positive mood throughout the game.

“I think they just felt like, ‘We have a chance to win this game,’” Archuleta said. “They stayed positive, after a while they were excited.”