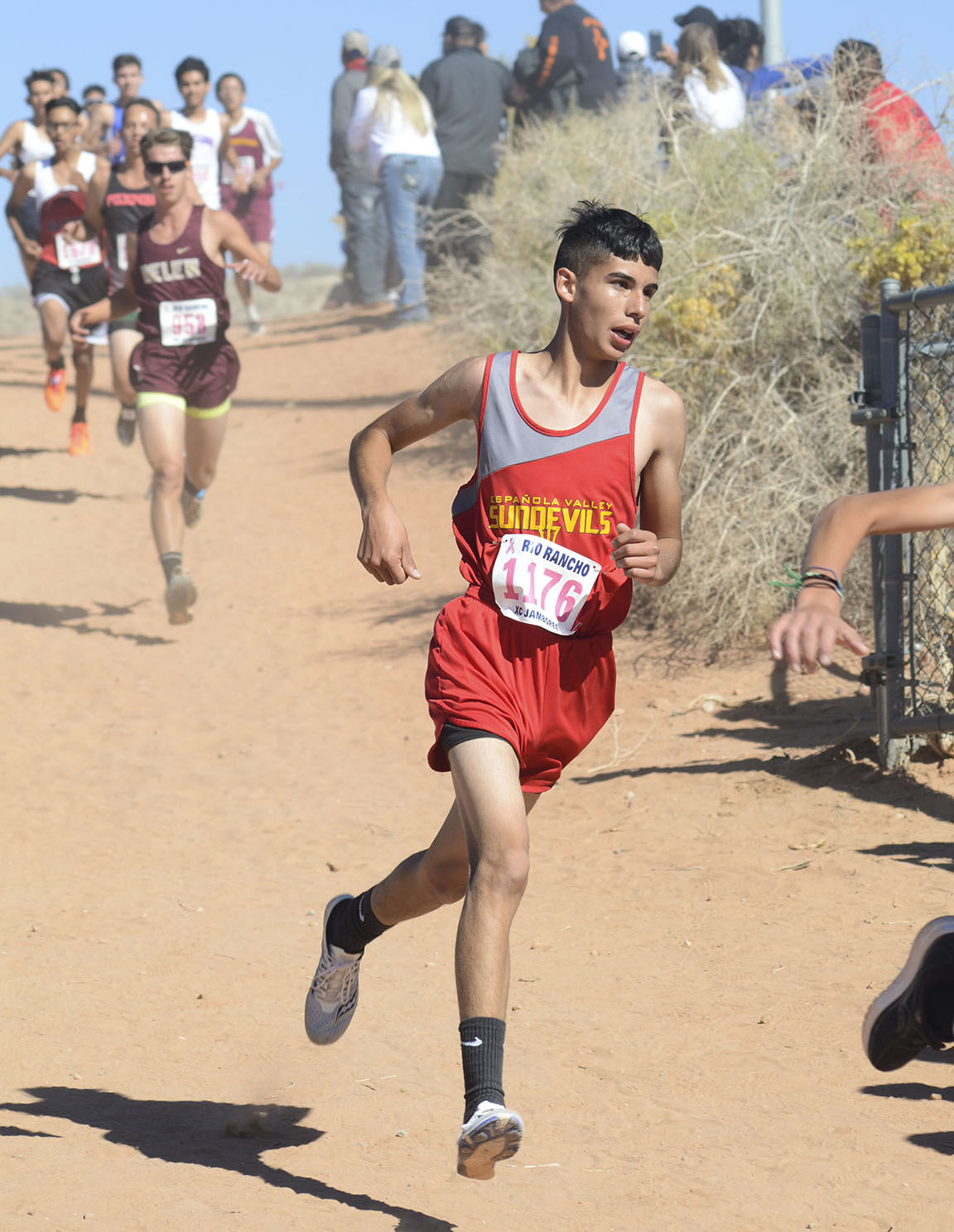 Española Valley’s Jose Castro runs down a hill ahead of a pack of runners during the Rio Rancho Jamboree on Oct. 19 at Rio Rancho High School. Equino’s 50th place result out of 150 runners helped Española place seventh out of 19 teams in the boys large school division of the Jamboree. 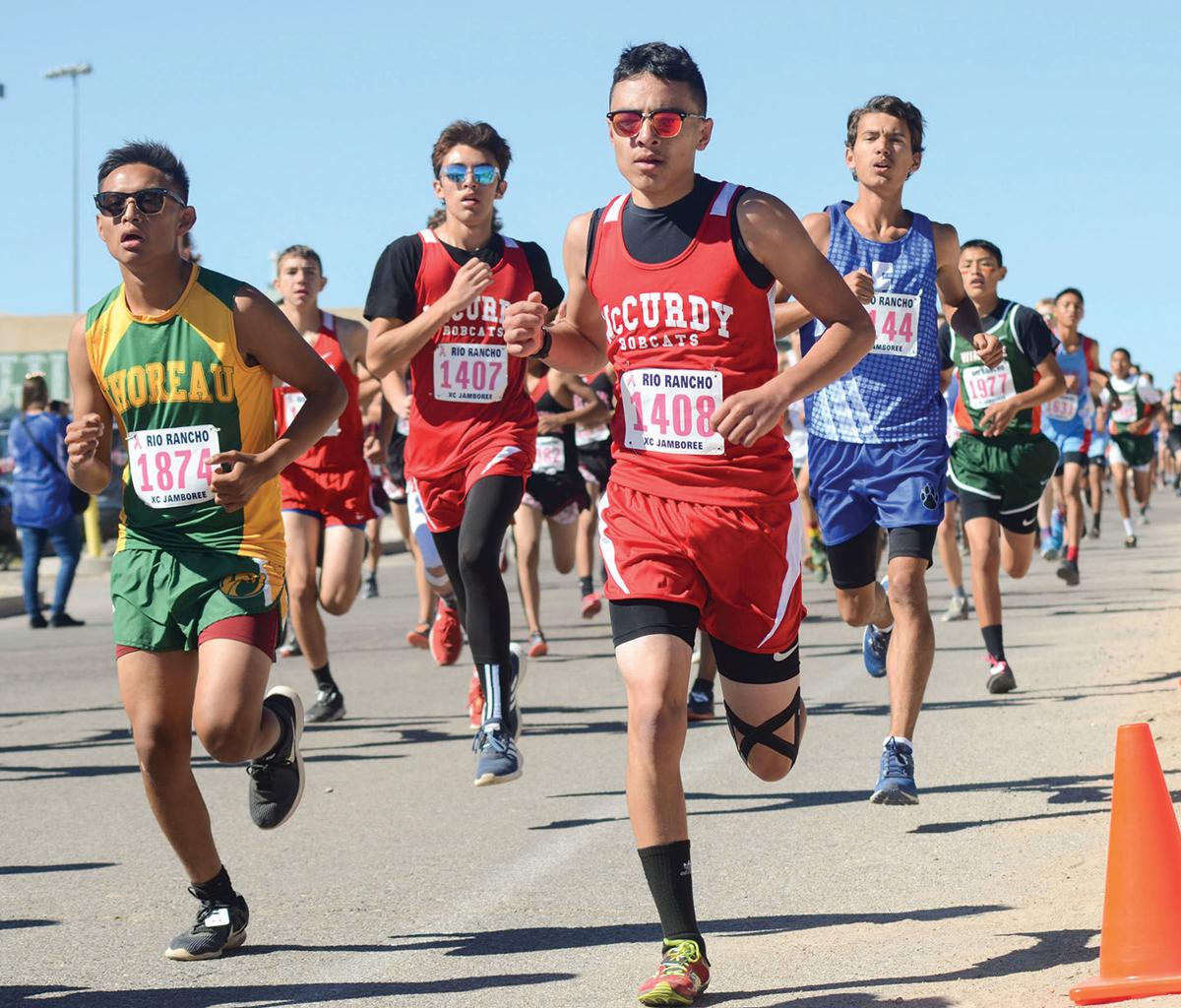 McCurdy Charter School’s Kodi Rodriguez (1408) runs down the parking lot in the first mile of the Rio Rancho Jamboree on Oct. 19 at Rio Rancho High School. 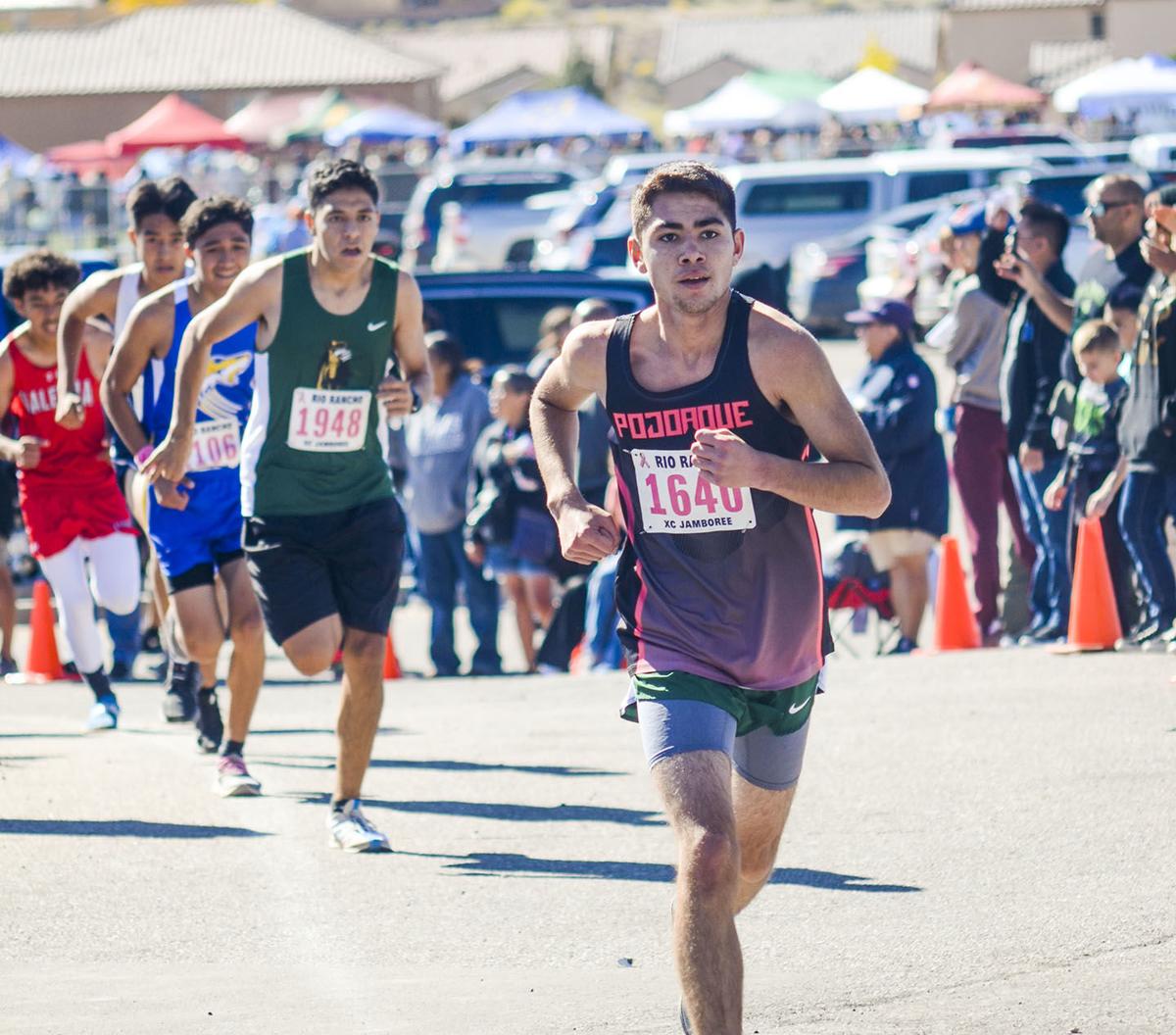 Pojoaque Valley’s Dylan Romero runs toward the stadium entrance and the final stint of the Rio Rancho Jamboree on Oct. 19 at Rio Rancho High School. 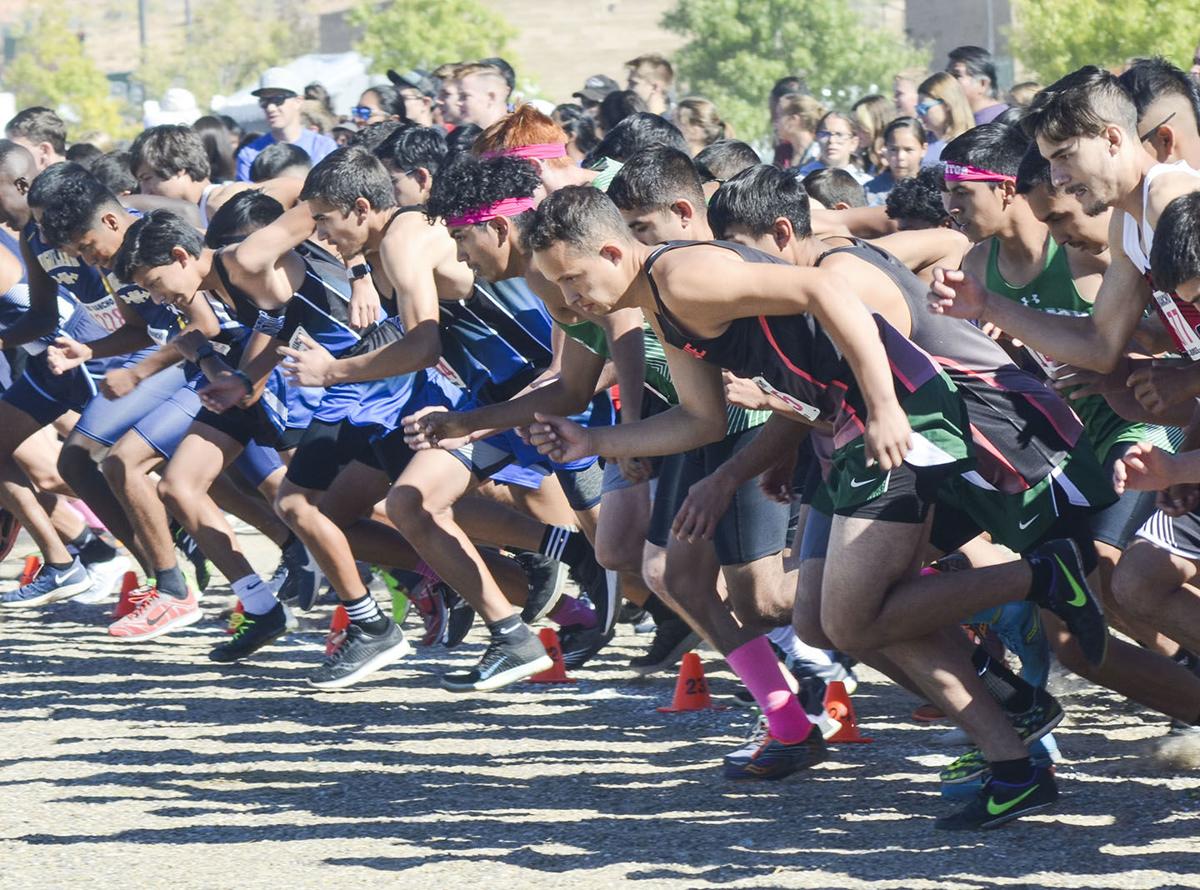 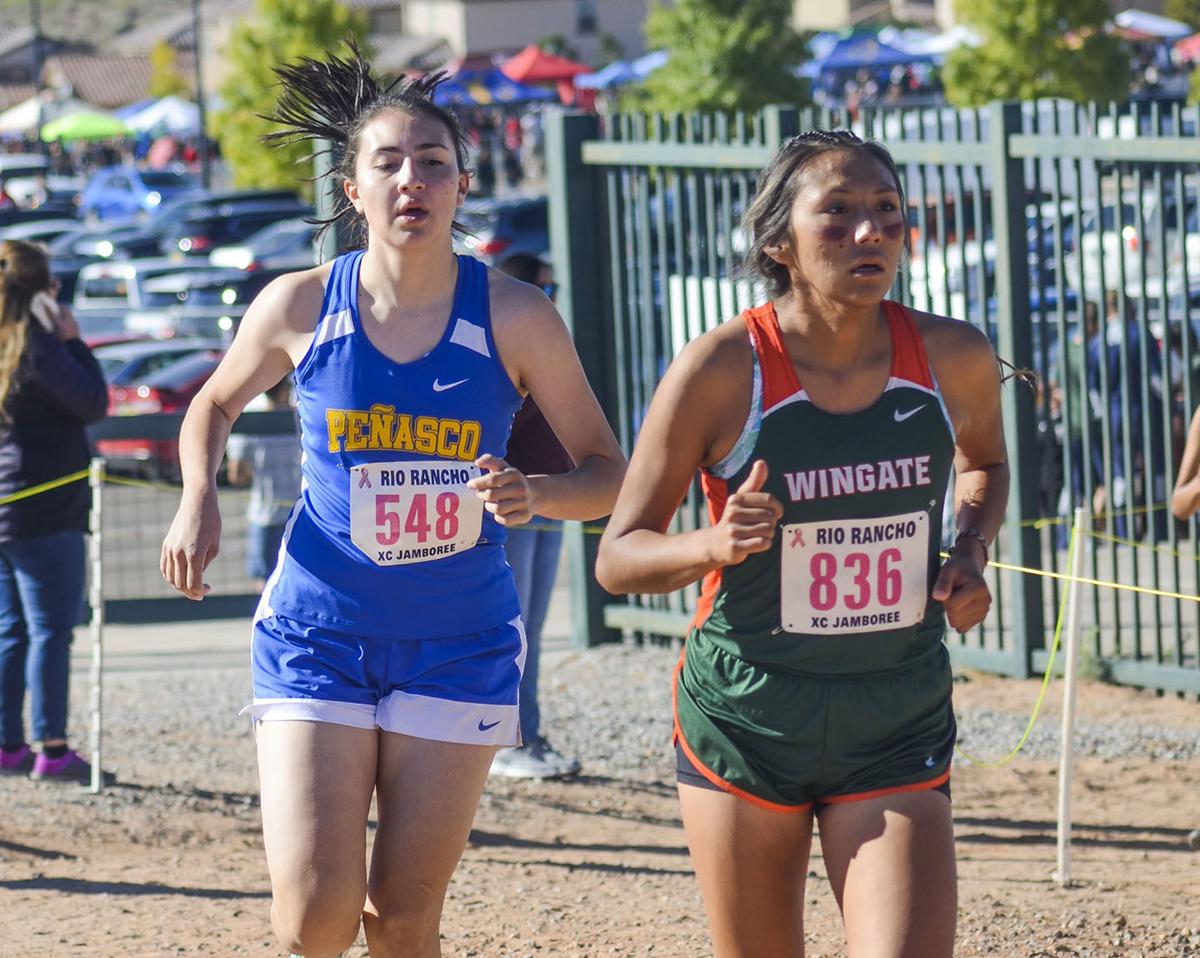 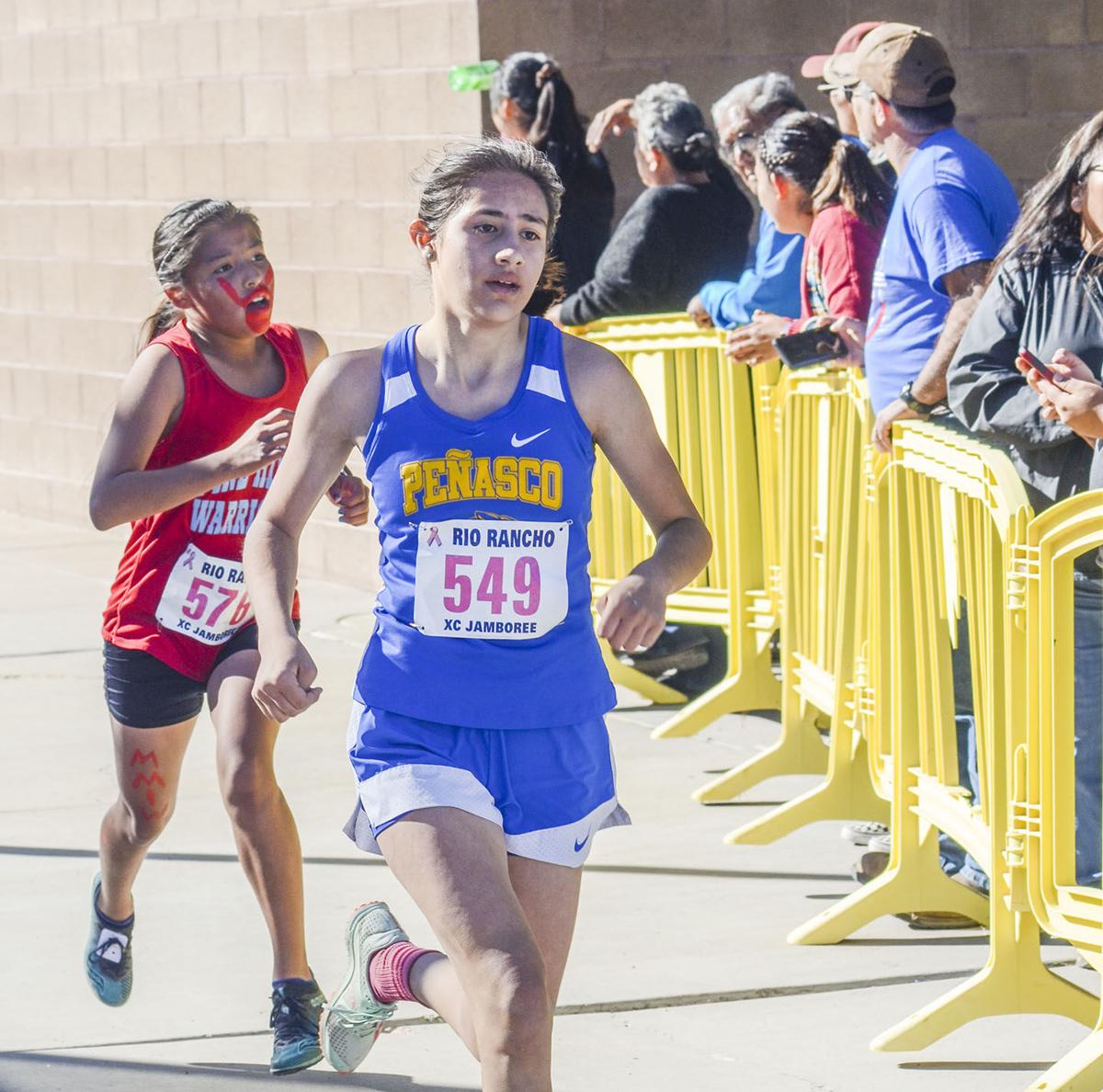 Peñasco's Charnelle Gonzales enters the final stretch inside the stadium at Rio Rancho High School on Oct. 19 during the Rio Rancho Jamboree.

Española Valley’s Jose Castro runs down a hill ahead of a pack of runners during the Rio Rancho Jamboree on Oct. 19 at Rio Rancho High School. Equino’s 50th place result out of 150 runners helped Española place seventh out of 19 teams in the boys large school division of the Jamboree.

McCurdy Charter School’s Kodi Rodriguez (1408) runs down the parking lot in the first mile of the Rio Rancho Jamboree on Oct. 19 at Rio Rancho High School.

Pojoaque Valley’s Dylan Romero runs toward the stadium entrance and the final stint of the Rio Rancho Jamboree on Oct. 19 at Rio Rancho High School.

Peñasco's Charnelle Gonzales enters the final stretch inside the stadium at Rio Rancho High School on Oct. 19 during the Rio Rancho Jamboree.

What he saw at the half-mile and 1-mile mark was enough for Española Valley High School cross country coach Landen Elliott-Knaggs to be convinced his Sundevils were going to have a good day.

Competing at the largest regular season cross country race in the state at the Rio Rancho Jamboree at Rio Rancho High School on Oct. 19, the Española boys had their best showing of the season, finishing in seventh place out of 19 teams in the boys large school division.

The Sundevils scored 219 points as a team, but the most important number to Elliott-Knaggs was the team’s scoring spread. Española’s first place runner, Juan Branch, finished the race in 35th place in 19 minutes, 12 seconds, which was only 1:02 faster than Española’s fifth place runner, Lawrence Maestas, who’s 71st place time was 20:14.30.

Keeping the pack tight is something Elliott-Knaggs has been stressing in the past few weeks after the Sundevils were running too far apart. That’s why he was so encouraged when he saw the team mostly running side by side as they hit the 1-mile mark at Rio Rancho.

“That can make it hard to close the gap,” Elliott-Knaggs said about running too far apart. “We’ve really been talking a lot about running as a pack so they can push each other. They’ve been doing better at that the last couple of meets, but today was just awesome. The scoring spread, that really shows how tight they were together.”

Jose Castro was second for the Sundevils (39th) and was followed by Mario Equino (50th) and Andray Lujan-Pana (59th).

The other big takeaway from the Jamboree for Española aside from successfully running in a pack and finishing in the top 10, was also beating District opponent Moriarty High School by 35 points, who finished two spots behind in ninth place.

The Sundevils and the Pintos will most likely be the two District 2-4A teams on the outside looking in when it comes to qualifying for state as a team in Edgewood on Nov. 1 at the District championship.

That means the only way the Sundevils will field any runners at state will be by placing in the top three individually from the non-qualifying teams at the District championship.

Castro has already had this on his mind, and he made sure to be well-aware of how he finished compared to Moriarty’s second and third runners, Henry Schuett and Romello Dominguez. Castro crossed the finish line five and seven spots ahead of the two.

The Pojoaque Valley High School boys placed three spots ahead of Española in fourth place, scoring 146 points. The Elks were led by Santiago Romero’s 14th place finish out of the 150-runner field. Dylan Romero and Joseph Gutierrez finished within a second of one another in 28th and 29th and Isaiah Roybal and Nathaniel Hart did so as well in 52nd and 53rd.

In the girls large school division, the race turned into a give-it-all performance for second place, as Laguna Acoma ran away from the field with a winning team score of 45, which was highlighted by first and second place overall finishes from Sidney Cheromiah (20:37.30) and Aubree Francis (21:06.20).

That second place team happened to be Pojoaque, as the Elkettes scoring five total of 111 was the next best effort behind the Lady Hawks’ 45.

Mia Vigil led Pojoaque in 12th place out of the 106 total runners, and Michaela Martinez was 20th, Marisa Martinez was 30th, Jasmine Valdez was 40th and Arissa Herrod was 48th.

Michaela Martinez’s 20th place finish was one spot ahead of Española’s Emily Chavez, who was one of two Lady Sundevils competing. Alysia Martinez also raced, and she finished 93rd.

Chavez’s effort in the final mile of the Jamboree helped improve her standing from near 30th to her landing spot in 21st.

“Emily just had an amazing race on the girls side,” Elliott-Knaggs said. “She had a really consistent race all the way through and her splits were really solid. She really pushed herself that last mile.”

Elliott-Knaggs was obviously impressed with his boys team’s cohesiveness, but more so, he was proud of the way they performed on the state’s biggest stage and meet.

“I think they responded very well to being in a large race,” he said. “They were right in the middle of it (large school race) and they definitely stepped up instead of getting scared today, which was pretty cool. It shows how focused they are and I’m pretty excited to see how the last few meets go.”

Next up for both Española and Pojoaque will be the final regular season meet before the District championship, which will be the Los Alamos Invitational on Friday at Los Alamos County Golf Course.

The Peñasco High School girls team took third place in the small school division with 90 points. The Lady Panthers’ effort came up brutally shy of a second or even first-place finish.

Not only did Crownpoint High School win the race with 89 points, but Wingate High School tied Peñasco at 90.

Having to break the tie via the sixth runner, it was the Lady Bears’ Tenara Morgan’s contribution of 37 points that edged out Jennifer Aguilar’s 44 for Peñasco.

Carly Gonzales placed 10th overall for the Lady Panthers and Maricela MacAuley (13th) and Charnelle Gonzales (20th) placed inside the top 25 in the 147-runner field.

In the boys small school division, Dulce High School finished 17th out of 28 teams, Peñasco was 20th and McCurdy Charter School was 25th.

Mesa Vista’s Damian Trujillo was the top finisher in the race from Rio Arriba County, as he crossed the finish line in 21st place (19:00.50) out of the large 205-runner field. Trojan teammate Danny Gollas was not far behind in 30th, and Isaiah Reval led the way for Dulce in 34th.