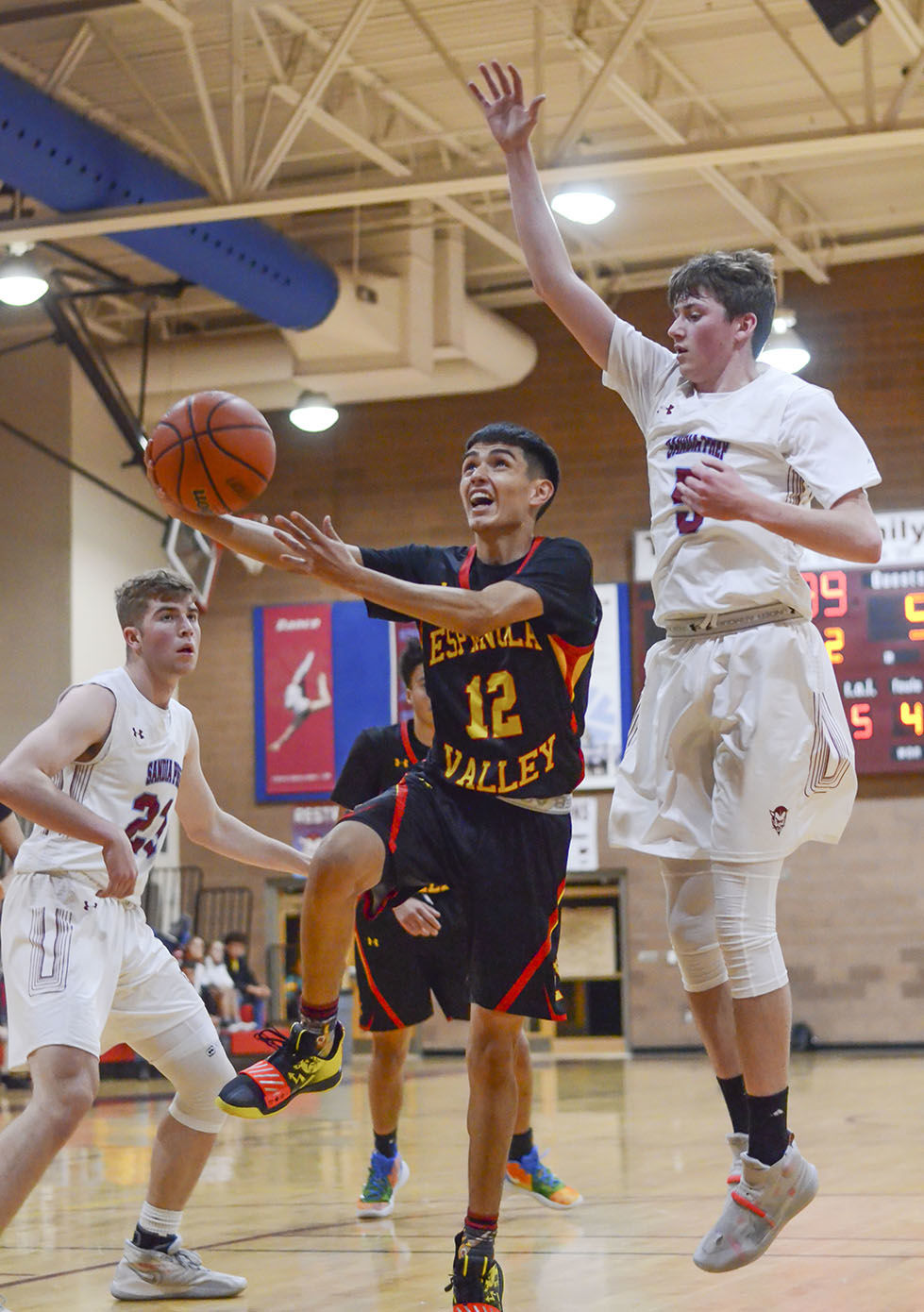 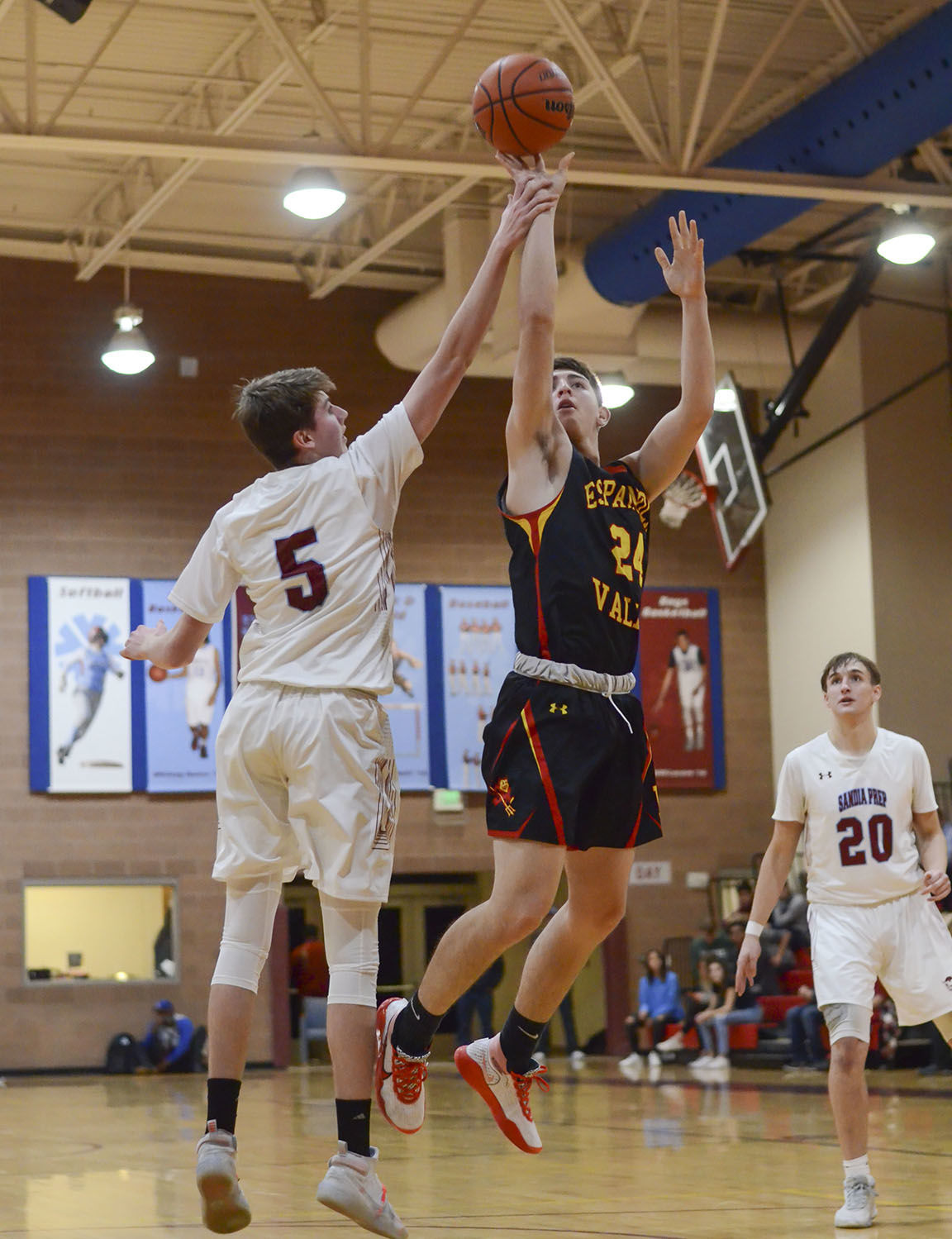 Española’s Jon Garcia gets fouled by Sandia Prep’s Sam Henderson during the act of shooting in Española’s 67-58 win to secure the Sandia Prep Tournament championship on Dec. 7 at Sandia Prep Field House. 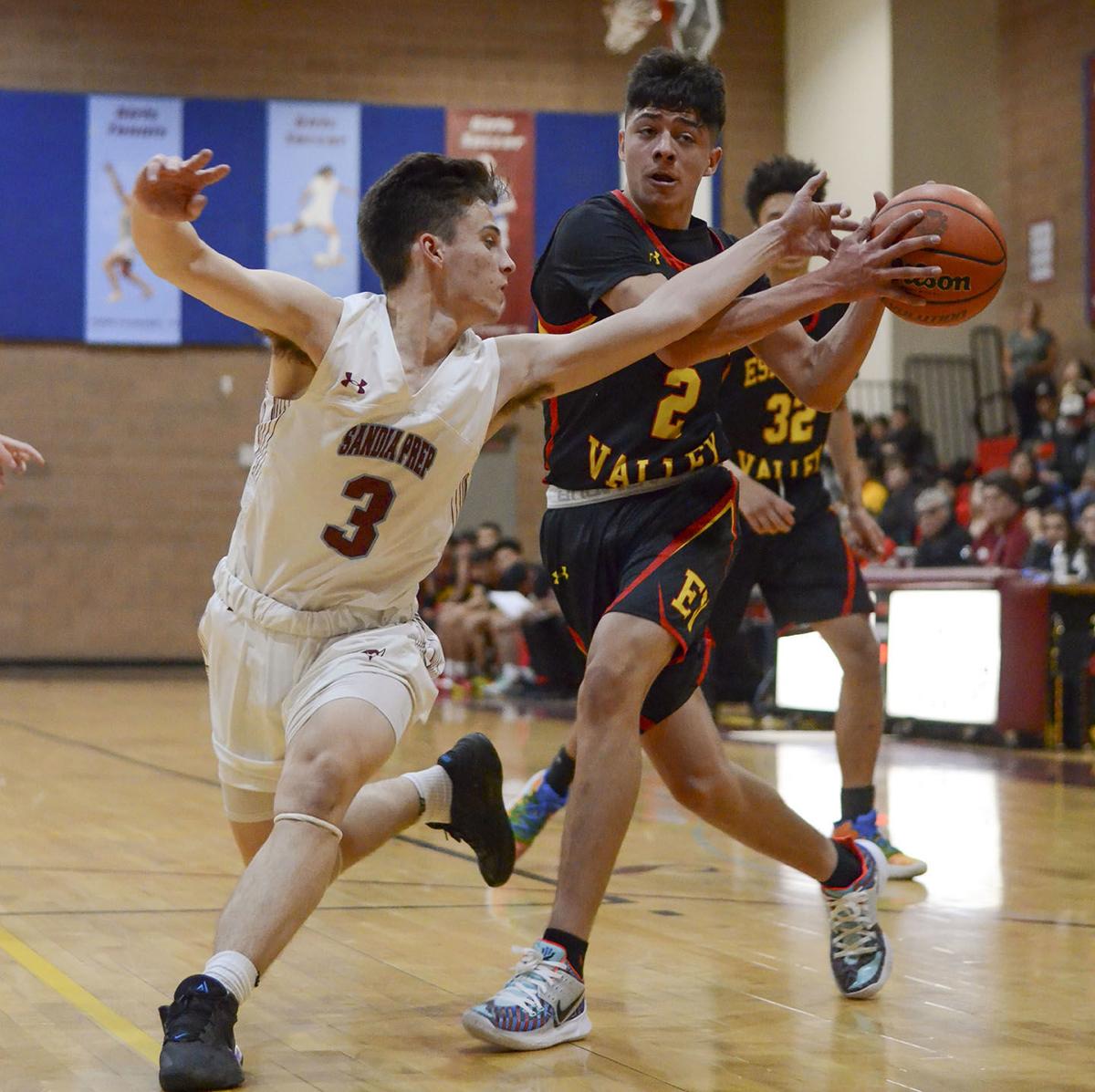 Española’s Jon Garcia gets fouled by Sandia Prep’s Sam Henderson during the act of shooting in Española’s 67-58 win to secure the Sandia Prep Tournament championship on Dec. 7 at Sandia Prep Field House.

Mathematically, shots had to start falling.

Turns out, he was more than correct on that theory and equation.

After suffering from a 28 percent shooting effort in the first half — which included a 14 percent mark in the first quarter — and falling behind 25-17 after 16 minutes of play, Española’s sharpshooters awoke in the second half to fire at a 65 percent clip.

That 19-of-29 marksmanship helped Española capture a 67-58 win over the hosts and second consecutive Sandia Prep Tournament championship.

“In the first half we were executing our plays really well, but the basket just seemed to have a lid on it,” Martinez said. “We had so many great looks at 3s, mid-range jumpers and layups but we could not finish. Eventually we got going and I told the boys, ‘Sooner or later, the laws of mathematics will work in our favor.’”

It couldn’t have been any truer, as the Sundevils hit seven of their first 10 shots to open the second half.

Once Jordan Duda converted on a 3-point play after being hacked at the rim to tie the score at 28-all and then drilled a 3-pointer on the very next possession, the Sundevils of Española had completely stolen the momentum from the Sundevils of Sandia Prep.

In part of the second half turnaround, Española scored 50 points over the final two quarters, which was a 33-point increase compared to the first half.

“When we are hot, shooters keep shooting,” Española sophomore Anthony Law — who led the team with 17 points — said. “When we got to the second half, we kept hitting fire every time and continued to find the open man.”

Duda was Española’s second leading scorer with 15 points, pouring in 12 of those in the second half.

Española took a 41-37 lead into the fourth quarter, and back-to-back 3-pointers by Marin Rodriguez with 5 minutes, 40 seconds left in the game helped Española separate by six.

On the very next possession, Rodriguez chucked up a heat check from beyond the arc, and although the ball hit nothing but air, Melaki Jones was there to corral the miss and score from under the basket.

The put-back increased Española’s lead to 52-42 with 5:02 remaining and sank the Sundevils of Sandia Prep for good. Española would go on to lead by as many as 15 points (60-45) in the quarter.

Española’s strategy to speed up the game was a big difference in the second half turnaround in coach Martinez’s eyes.

“At halftime we said, ‘You know what? We want to come out and play Española basketball,’” he said. “We came out in a press and started to use more pressure man-to-man and those things played in our favor.”

En route to the championship game, Española defeated St. Pius X High School 55-43 on Dec. 5 and took down Gallup High School 70-63 on Dec. 6. The Sundevils improved to 3-1 on the young season after losing the opener on the road at Santa Fe Indian School.

Española’s Garrett May was awarded the tournament’s most valuable player.

“Our group of boys, who are all very young, came out and performed this whole weekend,” Martinez said. “They fought through adversity and did everything that was asked of them. Winning this tournament gives us experience and learning how to win is a big thing. I’ve seen so much improvement since our first game against Santa Fe Indian.”

Española will take on the Braves from Santa Fe Indian School again on Thursday (12/12) to open the Al Armendariz Tournament at Capital High School.

The Sundevils hosted the Braves on Tuesday as well, but the result was not available by press time.