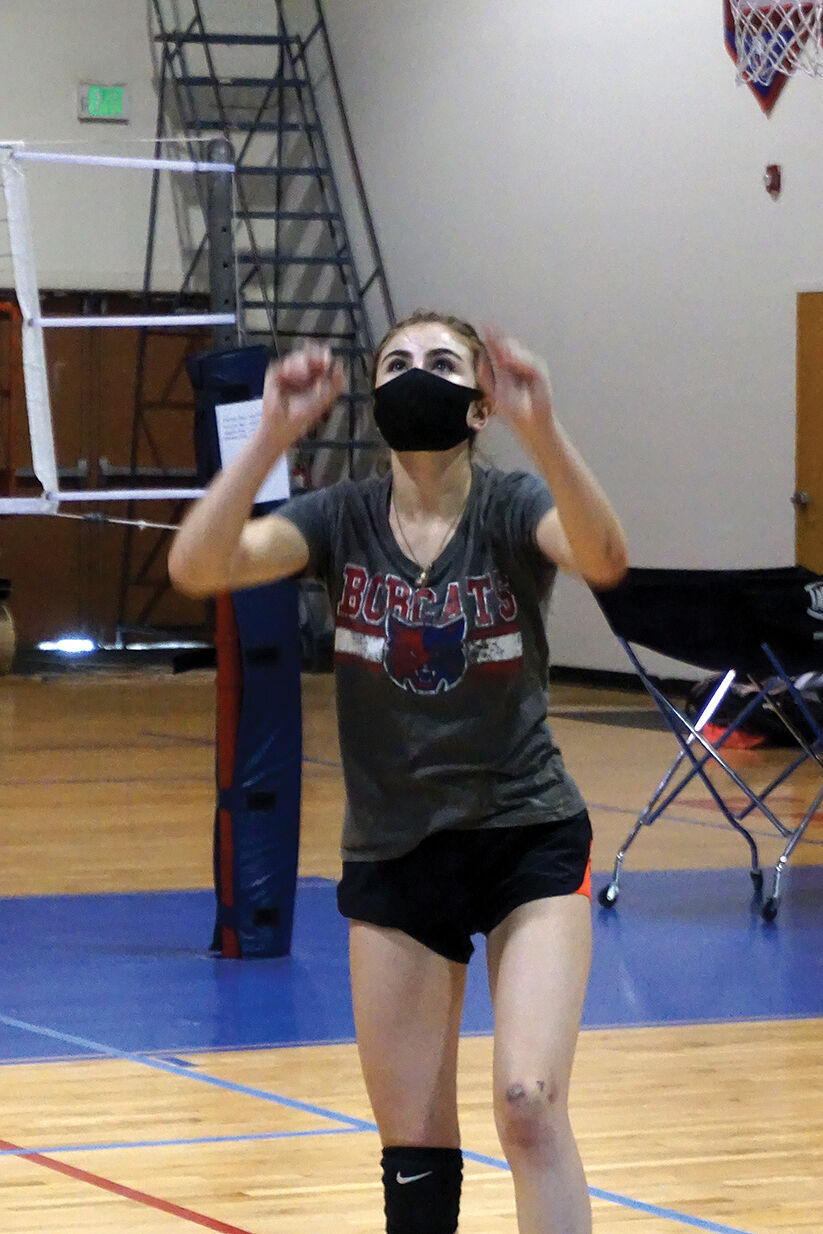 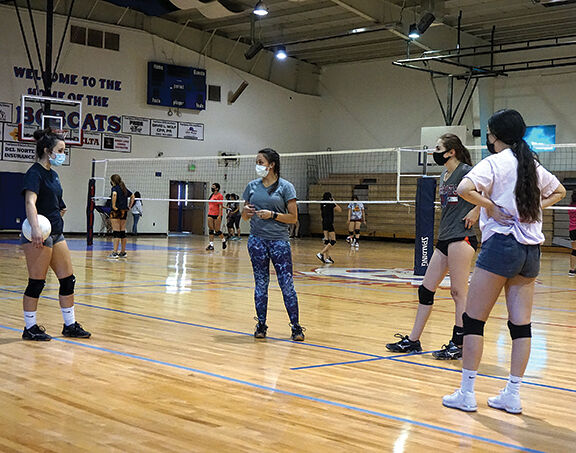 Senior Olivia Cantrell (left) listens to volleyball coach Jojo Sanchez give instructions on running drills, while keeping properly distanced. Ready to practice are seniors Geneva Serrano and Gracie Valencia. The volleyball team Monday was split into varsity and junior varisty and practice teams were kept to a maximum of nine players to one coach.

Senior Olivia Cantrell (left) listens to volleyball coach Jojo Sanchez give instructions on running drills, while keeping properly distanced. Ready to practice are seniors Geneva Serrano and Gracie Valencia. The volleyball team Monday was split into varsity and junior varisty and practice teams were kept to a maximum of nine players to one coach.

The McCurdy Charter School Bobcats are ready to start fall sports, though as of Monday sports had not yet been given the green light.

McCurdy Athletic Director Robert Nevarez said Sept. 30 that the programs were waiting to see if they could start full practices Monday.

As of last week, sports programs are having strength and conditioning workouts, he said, and for only 7.5 hours per week.

Nevarez said over the summer programs started with an all-sports strength and conditioning workout program on the football field. Then athletes were broken up by sport following guidelines from the New Mexico Activities Association.

He said volleyball was allowed to start working out in the gym about a month ago, still with no contact and having to wear masks. The basketball program is starting this week, moving into the gym two days per week with non-contact drills.

All practices come with safety precautions. For volleyball, athletes have a temperature check and symptoms screening when entering. Athletes bring their own equipment, and water fountains are shut off, and they stay in their own pods, which increased from five people to 10. And all athletes wear masks at all times, even while practicing. Basketball will have the same restrictions.

McCurdy has its first cross country and volleyball competitions scheduled for Saturday.

Nevarez said the schedule is flexible based on the start date of the season, and can fit their whole schedule starting a week or two later.

Nevarez said McCurdy has more students signed up for sports than usual.

He said the biggest difficulty is in student eligibility. Many students are struggling to adapt to the online environment, and McCurdy is working on programs to help student-athletes stay eligible such as having juniors and seniors mentor eighth and ninth-graders.

The Association approved a proposal Oct. 1 to only use semester grades in determining eligibility. A student must have a 2.0 GPA with no F’s in order to be eligible.

Given the start date, the cross country and volleyball programs have less than a week between the start of full practices and their first competition. That means just a few days to send out final rosters, meet with athletes and parents and give out uniforms.

“I think it also needs to be clearly understood that, this year, yeah we want to get to play and we want the goals to be set for making the playoffs and state championships,” Nevarez said. “But more importantly the foundation of the season is to get the student-athletes to compete again. Get them back out there, and let them find their normal again.”