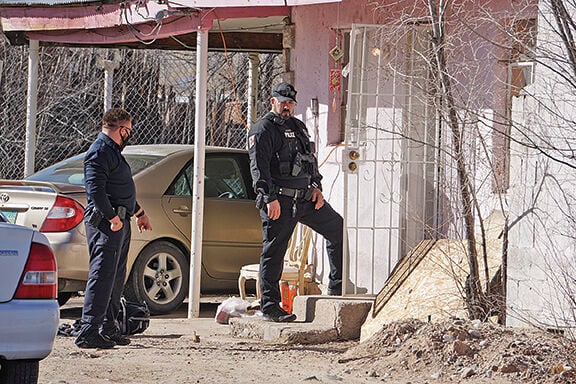 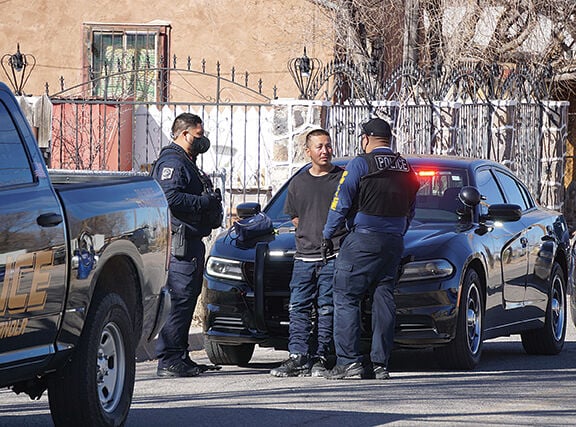 Miguel Lujan is taken into custody by Española Police officers.

Miguel Lujan is taken into custody by Española Police officers.

An Española man should have gotten out of a North Railroad Avenue house while the getting was good.

Española City Police Department Officer Dustin Chavez responded at 2 p.m., Feb. 8 to a breaking and entering call at the home of Nicole Bellamy. As Chavez approached the door he heard Bellamy yell “get out,” and drew his service weapon.

Miguel Lujan, 34, Española, came out the front door with his hands up. Chavez ordered him to drop the items he had in his hands, which were not identified.

Bellamy told Chavez that Lujan had entered her home through an unlocked kitchen door and refused to leave. She grabbed a stick for her protection and called 911.

While Chavez spoke with Bellamy, Officer Derrick Cruz searched Lujan and found a white powdery substance in his shirt pocket.

“With my training and experience the substance was classified as methamphetamine,” Chavez wrote in his report. “The meth was field tested at the Española Police Department and placed into evidence.”

Lujan was arrested and charged in Rio Arriba Magistrate Court with breaking and entering and possession of a controlled substance, both felonies.

A Miguel Lujan with the same birth year has two pending District Court cases for breaking and entering. The Dec. 10, 2020 case also includes larceny over $2,500 and the Jan. 25 case includes criminal damage to property and resisting or evading an officer.

No charges have been filed in District Court yet in the Feb. 8 case.